An A-Z of Arabic Propaganda

Throughout the Second World War, Britain’s Ministry of Information (MOI) produced and disseminated a remarkable assortment of propaganda material in Arabic. The material that it produced was intended to counter pro-Axis sentiment in the Arab World and bolster support for Britain and its allies. This propaganda effort arose largely in response to the German and Italian Governments’ own large scale propaganda campaigns that, with some success (more so Germany than Italy), targeted the Middle East and North Africa from the 1930s onwards. 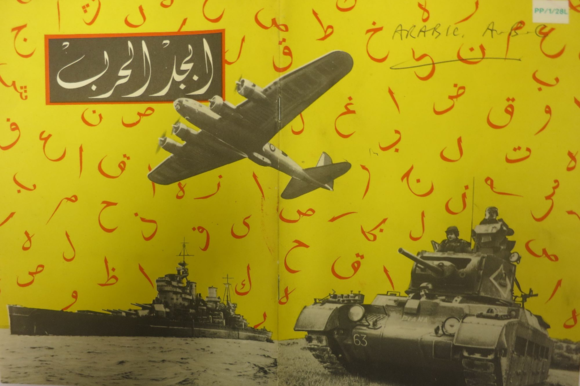 The German Government broadcast Arabic language radio programmes to the region seven days a week before and throughout the duration of the war. These broadcasts portrayed the Nazis as friends of Islam and staunch supporters of anti-imperialist movements, especially those that were opposed to the British Empire. Unsurprisingly, they found a receptive ear amongst some individuals then under the control of British colonial authorities; notably so after the fall of France in May 1940, when the prospect of Britain losing the war appeared a likely outcome to many. Pro-German sentiment in Iraq and other areas has been well-documented, but the broadcasts also had an impact on the periphery of the region. For example, in Sharjah on the British controlled Trucial Coast (present day UAE), pro-German graffiti was written on walls and large crowds gathered around the palace of its ruler, Shaikh Sultan bin Saqr al-Qasimi, to listen to the German radio broadcasts. 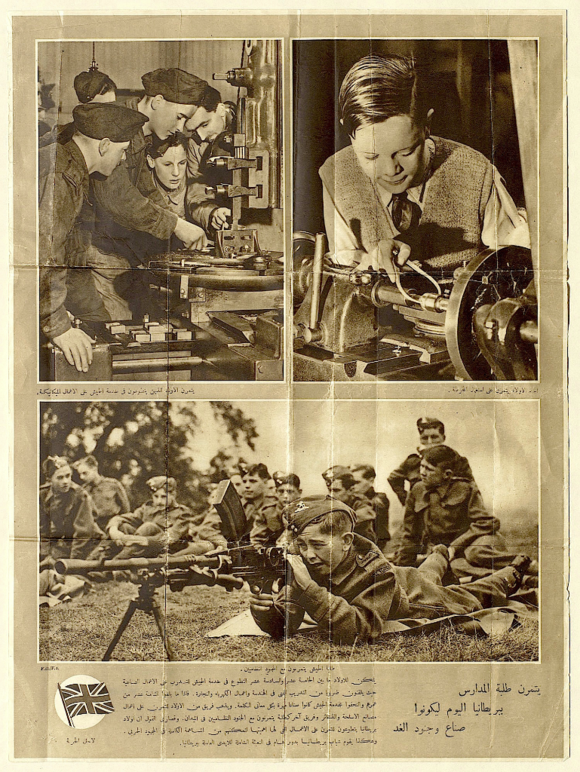 A wide selection of this MOI material is preserved in the archive of its successor organisation, the Central Office of Information (COI) that since 2000 has been held at the British Library. The contents of the MOI archive – hundreds of pamphlets and posters produced in Arabic, Persian, French, Italian, Russian, Dutch, Spanish and many other languages – demonstrate the large scale and broad scope of the MOI’s propaganda activities during the war. The Arabic language propaganda material produced by the MOI is interesting for the diversity of its form as well as its content. This material includes posters (copies of which have been preserved by chance in the British Library’s India Office Records), pamphlets, satirical cartoons and even lavishly illustrated short stories for children.

One of the most fascinating examples of this propaganda is a pamphlet entitled Alphabet of the War (Abjad al-ḥarb) that contains an illustrated entry for each of the letters of the Arabic alphabet. The entries are a curious assortment of geographical locations (England, USA, Iraq, Egypt and London), people (Churchill, Roosevelt and Hitler), armaments (Battle Ships, Tanks and Fighter Jets) and concepts (including Freedom, Bravery, Corruption and Honesty) that project an image of Britain as the last ‘bastion of freedom’ that is on the path to victory against the Nazi regime and its allies. Unlike many of the MOI’s other publications that were written for a general audience and then simply translated into different languages, this particular pamphlet was clearly written specifically for the Arab world. 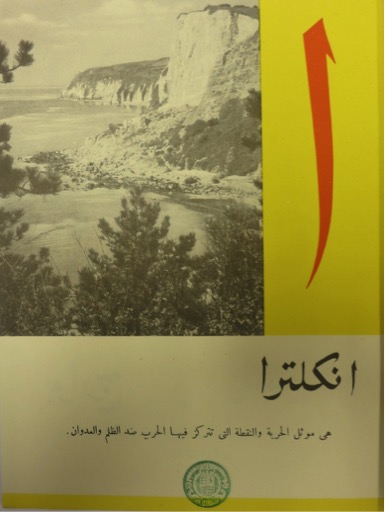 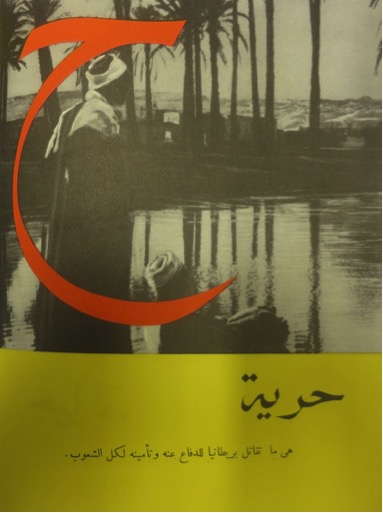 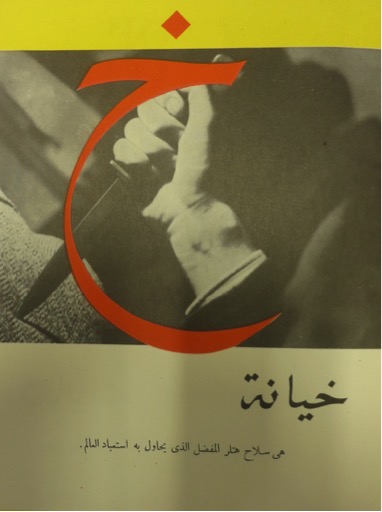 Inkiltirā: England – a bastion of freedom and the focal point of the war against injustice and aggression.
Ḥurrīyah: freedom – what Britain fights to defend and secure for all the peoples of the world.
Khiyānah: treachery – Hitler’s favourite weapon with which he tries to enslave the world. 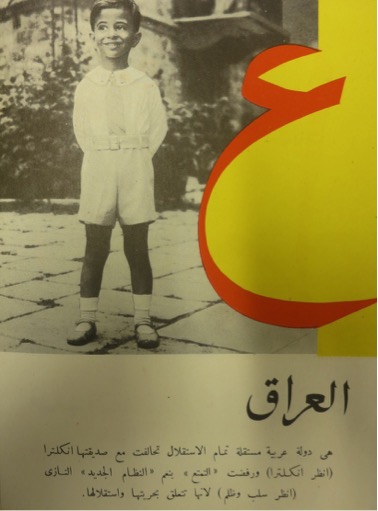 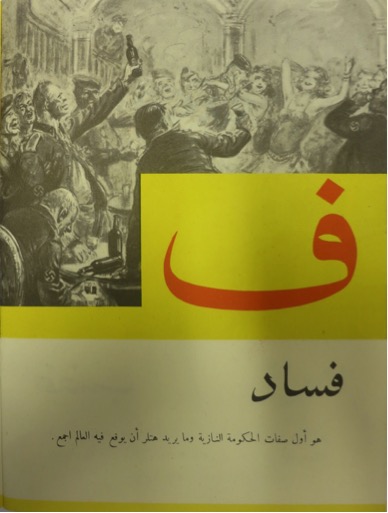 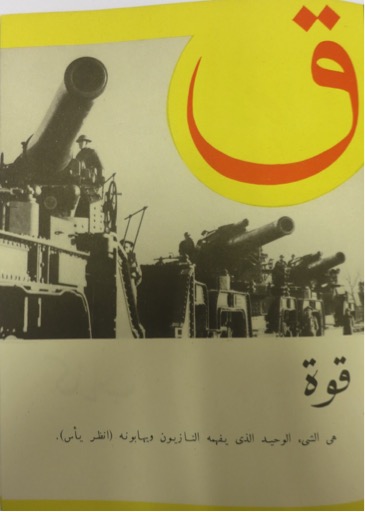 ʻIrāq – an independent Arab state with total independence that is allied to its friend, England and refused to ‘enjoy the privileges’ of the new Nazi regime because it holds fast to its freedom and independence’.
Fasād: Corruption – the primary characteristic of the Nazi Government and what Hitler wants to spread around the world.
Qūwah: force – the only thing that is understood and feared by the Nazis. 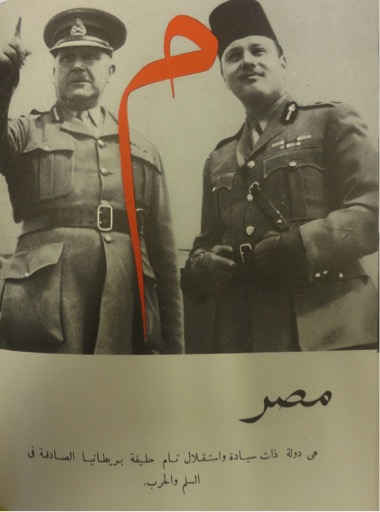 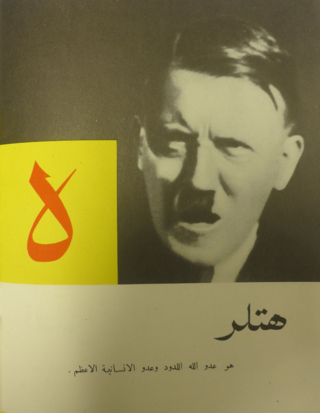 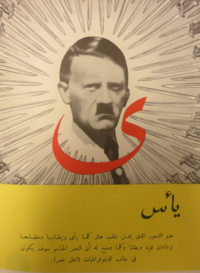 Miṣr: Egypt – a completely sovereign and independent state that is Britain’s sincere ally in war and peace.
Hitlar – he is the arch-enemy of God and humanity’s greatest enemy.
Ya’s: despair – the feeling in Hitler’s heart whenever he sees Britain and her allies increasing their force and power, when it is clear to him that the decisive victory will be on the side of the Democracies.

In the entry for Hitler, the Nazi leader is described as the ‘arch-enemy’ of God, and the entry for treachery (khiyānah) states that he is trying to ‘enslave the world’. In another entry (corruption/fasād) the Nazi regime is portrayed as morally degenerate; its soldiers depicted drinking alcohol and dancing with scantily clad women, an image presumably intended as an affront to the religious beliefs and perceived social conservatism of the Arab world.

The pamphlet appears to have been produced after Britain’s mass aerial bombardment of German cities had commenced, as the entry for planes (ṭā’irāt) describes British bombers as ‘messengers of wrath raining down woe and destruction on the heart of Germany’. This is a sentiment remarkably reminiscent of the official aims of Britain’s bombing campaign on Germany that stated:

The ultimate aim of the attack on a town area is to break the morale of the population which occupies it. To ensure this we must achieve two things: first, we must make the town physically uninhabitable and, secondly, we must make the people conscious of constant personal danger. The immediate aim, is therefore, twofold, namely, to produce (i) destruction, and (ii) the fear of death.

This violent tone is also contained in the entry for force (qūwah), which is described as the only thing that the Nazis understand and fear. The final entry in the pamphlet, despair (ya’s), leaves the reader with little doubt that Hitler will eventually be defeated and that Britain and its allies will be victorious.

The MOI also produced cruder, humorous style propaganda, notably a series of satirical cartoons entitled Adolf and his Donkey Benito which depict Hitler as a bumbling fool riding his unfortunate donkey, Benito (an obvious anthropomorphic representation of Mussolini). As well as being distributed as pamphlets, these cartoons were also inserted into local newspapers in the Arab World, including the Bahraini newspaper, al-Baḥrayn which was controlled by the British authorities at this time. The MOI’s Director of Middle East Propaganda, Professor L. F. Rushbrook Williams, had previously demonstrated that he was not averse to propaganda of this kind when he had encouraged the British Embassy in Baghdad to disseminate material that depicted Hitler and Mussolini as a pig and a jackal respectively. 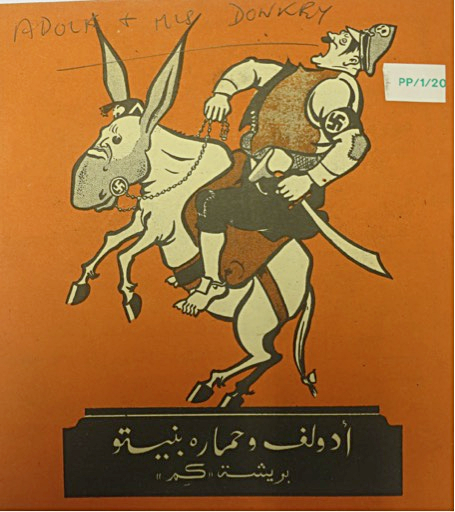 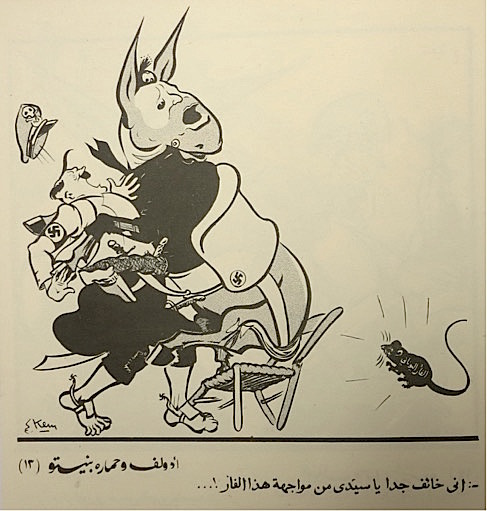 The Adolf and Benito cartoons were drawn by Kimon Evan Marengo (1907-1998), better known by his pen name, Kem, who was an Egyptian–born British cartoonist whose work appeared in the Daily Herald and the Daily Telegraph. Kem was heavily involved in the work of the MOI and produced hundreds of cartoons in Arabic as well as in Persian - for example the famous Shahnamah cartoons described in a previous blog. One of the cartoons in the series depicts Mussolini as afraid of confronting a tiny mouse (labelled the Greek mouse), a not too subtle reference to the Italian military’s unsuccessful invasion of Greece in the Greco-Italian War of 1940-41.

In a clear attempt to target children, the MOI also produced of a series of short stories named Ahmad and Johnny. These stories were illustrated by William Lindsay Cable, an illustrator most widely known for his work in the books of the famous children’s author, Enid Blyton. 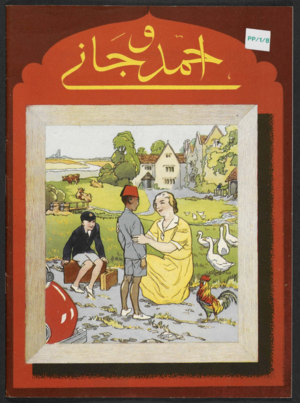 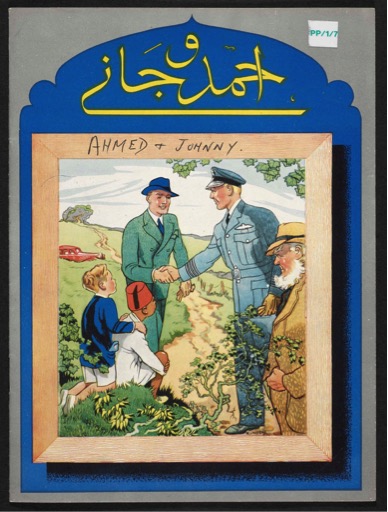 In a manner reminiscent of Blyton’s work, Ahmad and Johnny follows the adventures of Ahmad, a Sudanese boy living in England with Johnny and his family. In one issue of the series, it is explained that Johnny’s father had worked in Sudan and brought Ahmad (presumably an orphan) back with him to Britain. In the same issue, Ahmad and Johnny go for a walk in the Kent countryside where they bump into a farmer whose son is said to be serving with the British military in Sudan. Britain is described as the ‘home of freedom’ and the ‘source of hope of the future’. Ahmad and the peasant compare life in England and Sudan and the ostensibly friendly relations between the two nations are stressed.

In 1938, as a response to the aforementioned Arabic-language radio broadcasts of the German and Italian Governments, Britain established the BBC Arabic radio station. Subsequently, the MOI produced a pamphlet entitled ‘This is London’ that promoted the new station and its radio broadcasts. 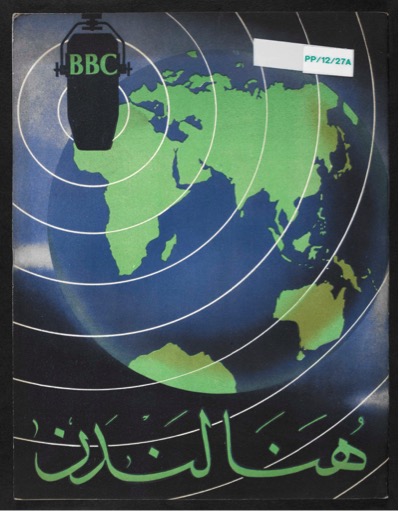 The pamphlet gives details of the station’s broadcasts including its lineup of announcers and its first ever news broadcast. It also contains details and photos of the official opening of Cardiff Mosque in 1943. An event that was attended by Hafiz Wahba (then Saudi Arabia’s representative in London) and was broadcast by BBC Arabic. 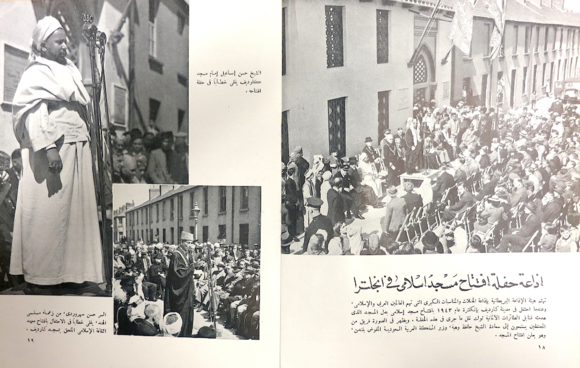 Ultimately, the diverse MOI materials now held at the British Library are testament to the multi-faceted propaganda effort that was carried out by the ministry, one which utilised the skills and expertise of British academics, cartoonists, authors and many other skilled professionals. It was a campaign which sought to belittle Britain’s enemies and project an image of the country as a righteous, commanding military power that was close to victory against the forces of evil. In the context of the Middle East, this entailed a wholly cynical attempt to portray Britain’s military occupation and colonial domination of the region as merely ‘brotherly’ friendships between allies.

Ironically, in 1948, a British official in the Persian Gulf bemoaned the manner in which the MOI had popularised self-expression as a counter to Nazism as a ‘weapon of war’. He argued that this effort had served to increase the Gulf’s inhabitants knowledge of the world’s problems, ‘particularly of the rights of small nations and the independence of Arab nations’ and was causing them to question Britain’s dominant position in the region.[1]

Those interested to learn more about the MOI will be pleased to hear that in September 2016, the British Library is releasing a publication entitled Persuading the People, in which the renowned expert on Propaganda, Professor David Welch of the University of Kent, explores the role of the MOI and its propaganda output in closer detail.

Posted by Ursula Sims-Williams at 1:26 AM