Eighth and ninth century versions of the Rustam cycle

Stories of the hero Rustam and his trusty steed Rakhsh, immortalized by the tenth century poet Firdawsi in his epic poem the Shahnamah (ʻBook of kingsʼ), are among the best loved in the whole of Persian literature. Not so well-known, however, are unique versions of the same story dating from the eighth and ninth centuries which are currently on display in the international exhibition The Everlasting Flame: Zoroastrianism in History and Imagination at the National Museum, Delhi (More on this exhibition in my recent post Celebrating Noruz in Delhi with new 'Everlasting Flame'). 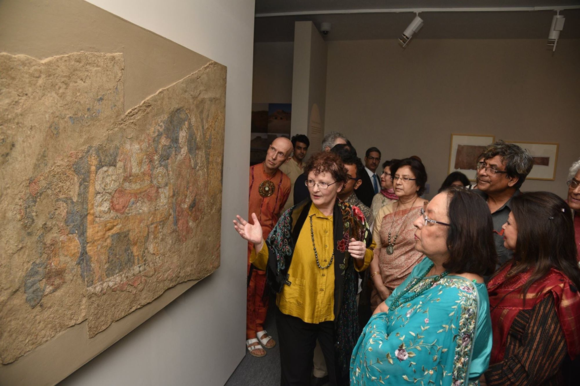 Rustam's Rakhsh in Firdawsi’s Shahnamah
Rakhsh was no ordinary horse. The Shahnamah tells us how Rustam inspected the horses of Zabulistan and Kabul and finally selected a colt with the chest and shoulders of a lion, as strong as an elephant, and the colour of rose leaves scattered on a saffron background. This colt, already known as ‘Rustam’s Rakhsh’, was, it seems, pre-destined to carry the defender of the land of Iran.

Rakhsh was not only fast and strong, he was intelligent and an active protagonist. Perhaps his best-known exploit was the first of the seven ‘trials’ which Rustam underwent on the quest to liberate king Kavus from the demons of Mazandaran. Exhausted by his long journey, Rustam fell asleep. Nearby, however, hidden in the reeds was a fierce and hungry lion. The lion attacked but Rakhsh pounded the lion’s head with his hooves, bit his neck and tore the lion into pieces. When Rustam woke, the lion was dead. 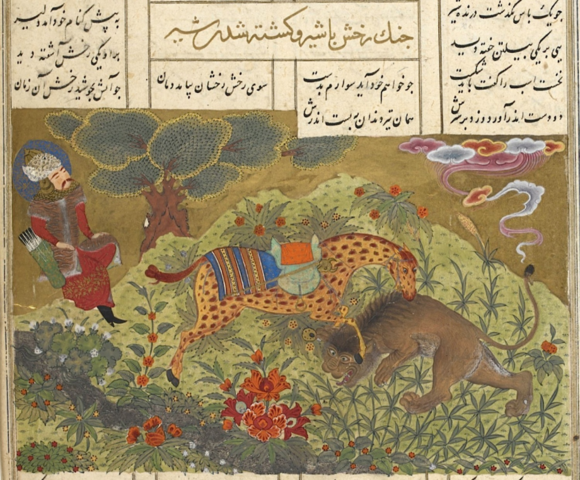 In future, Rustam ordered, Rakhsh was to wake him if an enemy drew near. However, during the third ‘trial’, Rustam, while asleep, was approached again, this time by a monstrous dragon. Twice woken by his horse Rakhsh, in the darkness of the night he failed to see any danger and went back to sleep. Woken a third time, however, Rustam finally saw the dragon and with Rakhsh’s help succeeded in killing him. 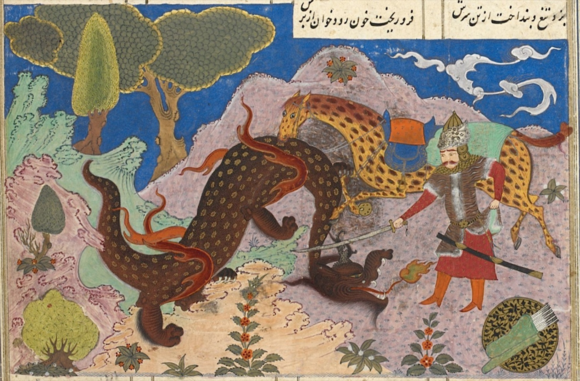 Rustam and Rakhsh in the third ‘trial’ when together they defeat a dragon, Rakhsh biting the dragon while Rustam cuts off his head. Copied in 891/1486, Turkman/Timurid style (British Library Add.18188, f 91v)

The Sogdian Rustam fragment
The Middle Persian Xwaday-namag ‘Book of kings’ (de Blois, “Epics”), one of the sources on which Firdawsi drew, was probably not a poem, but rather a prose compendium of legendary and historical traditions put together toward the end of the Sasanian empire. Although it is referred to frequently in Arabic sources, no extant copy survives as such. The name Rustam, however, began to be common at the very end of the Sasanian period, in the seventh century, no doubt reflecting the fact that by this time the Rustam legend had become widely popular in the Western Iranian lands, especially in Sogdiana (modern day Tajikistan and Uzbekistan) the homeland of the Sogdians (Sims-Williams, 2015).

The British Library is fortunate in having in its collections part of a fragment of the story written in Sogdian (an eastern Iranian language spoken by the Sogdians), which probably dates from the ninth century. It was discovered in 1907 in cave 17 at Dunhuang, China, during Stein’s second expedition to Central Asia. The upper part of the same manuscript was subsequently acquired by Paul Pelliot the following year and is now in the Bibliotheque Nationale, Paris. Together these two fragments form the only surviving textual evidence for an early Rustam cycle, copied some 200 years before Firdawsi completed his epic poem.

Reconstruction of the two fragments of the Sogdian story of Rustam and the demons, ninth century, from Dunhuang, China. Top: Pelliot Sogdien 13, and bottom: Stein Ch. 00349 (British Library Or.8212/81)

The story described in our Sogdian fragment does not correspond with any of the episodes known from Firdawsi’s Shahnamah. It relates how Rustam and his horse Rakhsh destroyed a band of demons by pretending to flee and then attacking them while they were unprepared. The fragment begins and ends tantalisingly mid-sentence so we’ll never know exactly what happened!

[Paris fragment] ... [The demons] immediately fled towards [the city]. Rustam went in pursuit right up to the city gates. Many demons died from being trampled; only a thousand managed to enter the city. They shut the gates. Rustam returned with great renown. He went to a good pasture, stopped, took off the saddle and let his horse loose on the grass. He himself rested, ate a meal, was satisfied, spread a rug, lay down and began to sleep.

The demons stood in malevolent consultation. They said to one another: It was a great evil, a great shame on us, that we should have taken refuge in the city from a single horseman. Why should we not go out? Either let us all die and be annihilated or let us exact vengeance for our lords! The demons, who were left a meagre remnant of their former strength, began to prepare great heavy equipment with strong armour and with great ...

Then the observant Rakhsh came and woke Rustam. Rustam arose from his sleep, quickly donned his leopard-skin garment, tied on his bow-case, mounted Rakhsh and hastened towards the demons. When Rustam saw from afar the army of the demons, he said to Rakhsh [beginning of the London fragment]: Come, sir, run away little [by little]; let us perform [a trick] so that the demons [pursue us] to the flat [plain ...]. Rakhsh agreed. Immediately Rustam turned back. When the demons saw, at once both the cavalry and the infantry quickly hurled themselves forward. They said to one another: Now the chief’s hope has been crushed; no longer is he prepared to do battle with us. By no means let him escape! Do not kill him either, but take him alive so that we may show him evil punishment and harsh torture! The demons encouraged one another greatly; they all howled and departed in pursuit of Rustam. Then Rustam turned round and attacked the demons like a fierce lion attacking a deer or a hyena attacking a flock or herd, like a falcon attacking a [hare or] a porcupine attacking a snake, and he began [to destroy] them ...

The murals of Panjikent
Additional archaeological evidence for an early Rustam cycle is to be found in wall-paintings discovered by the archaeologist B. Stavisky in 1956-7 in a two storeyed house in the south east of medieval Panjikent, Tajikistan. 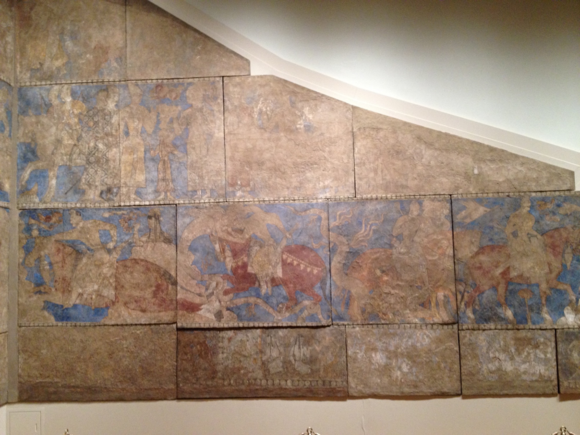 Reconstruction of the Rustam frieze, made at the time of excavation by artists Gremyachinskaya and Nikitin, now in the Museum of History of Culture of Panjikent, Tajikistan. Photo: Ursula Sims-Williams

The friezes are attributed to the first half of the eighth century and depict a series of episodes in which Rustam and Rakhsh are engaged in battle with demons. While identifications with known episodes in the Shahnamah are difficult it is tempting to think that one of the scenes may correspond to that described in the Sogdian fragment discovered at Dunhuang. 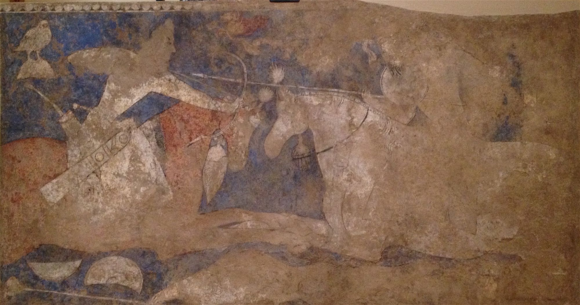