Previous posts on the subject of late Mughal or Delhi miniature paintings on ivory have dealt with portraits, with which the Visual Arts collection is well endowed. Not so well represented in the earlier collection are topographical paintings on ivory, so it was especially gratifying to be able to acquire two superb examples of the genre during my time as Curator of Visual Arts. 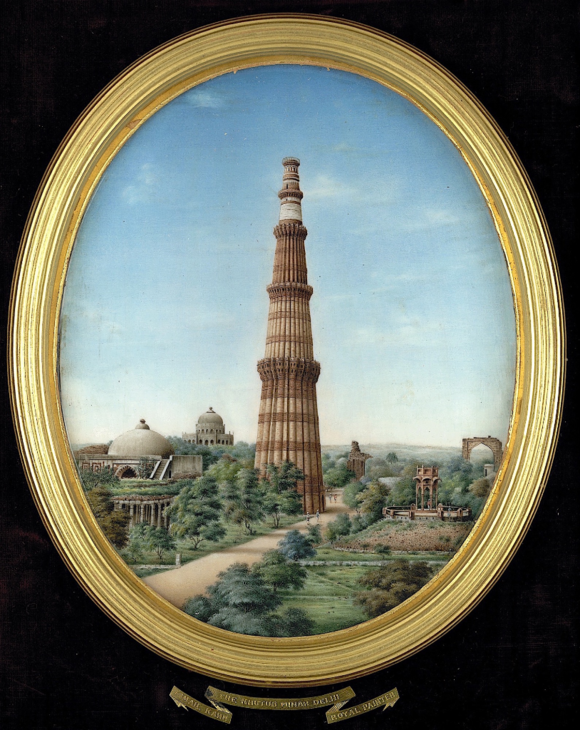 A view by Ismail Khan of the Qutb Minar from the east is especially rich in topographical details. The tower was begun by Qutb al-Din Aybak in 1193 as a minaret to his adjacent mosque and as sign of his victory over Prithviraj Chauhan, the Hindu king of Delhi and Ajmer. Three more storeys were added by his son-in-law and successor Iltutmish. The topmost storey was struck by lightning in 1368 and the repairs by Firoz Shah Tughluq divided that storey into two and partly faced them in marble. The screen of the Quwwat al-Islam mosque also built by the first two monarchs stretches across the background. In front of the central arch of the mosque screen is the famous Iron Pillar, a 4th-century wonder of Gupta-period metallurgy, brought from elsewhere and placed in this site most probably by one of the previous Hindu rulers. On the left is the octagonal Mughal tomb of Adham Khan built in 1562 in the style of the previous Lodhi dynasty. Adham Khan (d. 1562) was the son of Akbar’s wet-nurse Maham Anga and killed on his orders after he assassinated Akbar’s general Ataga Khan. Despite his transgressions, Akbar built him this lavish tomb, which is now surrounded by the buildings of Mehrauli. Nearer is the gateway known as the Alai Darwaza built by Ala al-Din Khilji in 1311 along with part of his colonnade of re-used temple pillars in his bid to double the size of the mosque. In the foreground is Major Robert Smith’s re-sited cupola that crowned the top of the Minar in his repairs to earlier damage in 1828 and taken down and re-sited here in 1847. It was moved again in 1914 to a garden south-east of the Minar.

A letter accompanying the painting dated 21 September 1881 records the gift of the painting to Arthur Tite by the original purchaser D.A. Traill Christie, both men having worked for the Bengal Central Railway in India:

Meantime I send herewith for your acceptance the Indian miniature I spoke of the framing of which was delayed in consequence of my own exigeances (sic) & which I think you will like. It is a genuine work of Ismail Khan’s bought by myself from Delhi in 1865 and has been pronounced by several connoisseurs one of the finest examples of the art. Its Eastern origin & associations will be an appropriate souvenir to recall to you the establishment of the Bengal Central.

Today I have received visits from the artists of Delhi: they are three in number, and each appears to have an atelier of pupils. The best is one Ismael Khan. Their manual dexterity is most surprising. Of course, what they do is entirely traditional. They work from photographs, and never by any chance from nature. Ismael Khan showed me what his father had done before photography came into vogue, and really a portrait of Sir C. Napier was wonderfully like, though without an atom of chic or artistic rendering. I pointed out to the old man certain faults - and glaring ones - of perspective, and he has promised to do me a view of the Golden Temple without any faults. “These”, he said, pointing to his miniatures, “are done for the sahibs who do not understand. I know they are wrong, but what does it matter? No one cares. But I will show you that I can do better.” This better miniature I never received; perhaps my friend Ismael found it not so easy to do a perfect picture

Lockwood Kipling suggests in the Delhi Gazetteer of 1883 that photographs were photographically enlarged or diminished to the right size, before having their outlines traced on transparent talc: ‘this tracing is then retraced in the reverse side of the talc with transfer ink and transferred to a thin sheet of ivory, the features, etc., are then touched up and finally shaded and coloured. ... As the whole work is done with water-colour any part can be washed out and redone.’ (Archer and Archer 1955, pp. 70-71) 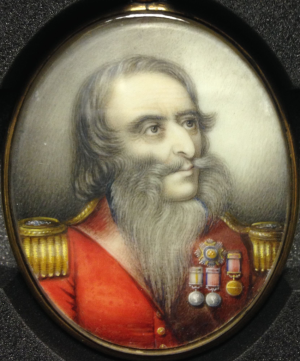 A recently acquired portrait miniature of Sir Charles Napier (1782-1853) gives visual expression to Prinsep’s opinion. Napier was Commander-in-Chief of the Bombay Army famous for his capture of Sind in 1843 (‘peccavi’ he is supposed to have telegraphed to Calcutta). He left India in 1847 but returned as Commander in Chief in 1849. The face is fine, but the shoulders are too close together and the decorations are worn too high up on the chest. He is wearing the star and sash of a Knight Grand Cross of the Order of the Bath (GBC) conferred in 1843 and the Sind Campaign Medal of that same year, as well as other medals connected with his earlier career in the Peninsular War. The long forked beard has gone awry, since the artist is dependent not on a photograph, as Prinsep suggests, but on a lithographic print.

The original artist of the portrait, Caïs de Pierlas, was a plantsman and amateur artist based in Nice and he seems to have met Napier in 1848 - the inscription states that the original drawing was done in that year. An oil painting by him of Napier on a rearing horse meant to be at the Battle of Miani in 1843 appeared at Christie’s South Kensington on 29 September 2011, lot 239. The details of the beard are not clear in the lithographic portrait nor are there any medals, but the latter must have been copied from other prints. The artist of our miniature is almost certainly Ghulam Husayn Khan, who painted both in oils and in watercolour on ivory in the mid-century, although Ismail Khan is thought to be the son of the topographical artist Mazhar ‘Ali Khan (see below). 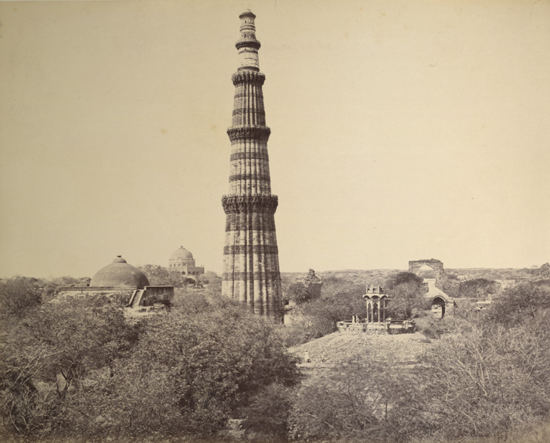 At first sight Ismail Khan’s view reproduces the photographs of the Qutb Minar taken by John Murray and by Robert and Harriet Tytler in 1858 and by Samuel Bourne in the 1860s. All three images are almost identical in composition: reproduced above is the Bourne version. Only one structure would have allowed this viewpoint at that time, the so-called Garhgaj (literally ‘elephant-house’), near the Mughal caravanserai to the east of the Qutb enclosure, a stepped pyramidal structure constructed by Sir Thomas Theophilus Metcalfe when Agent at the Delhi Court, who had converted the nearby Mughal tomb of Adham Khan’s brother, Muhammad Quli Khan, into a summer retreat. All 19th century photographs of the Qutb Minar taken from this point show a tangle of trees intervening across the foreground, making a picturesque view, but not appealing much to an artist trained in the Mughal tradition. Ismail Khan has therefore opened up the foreground, by reducing the size of the trees, thus allowing him to incorporate part of the southern colonnade of ‘Ala’ al-Din’s early 14th century extension to the mosque enclosure to the east of his gateway, as well as a pathway coming in from the viewer’s left; both innovations increase the sense of depth in the painting, as well as conforming to the higher viewpoint beloved of Indian artists.

Ismail Khan must not, however, be supposed to have been so radical an innovator that he actually stood on the Garhgaj to record the view. The lower part of the painting is based on views by Delhi artists of the 1840s, first taken for Syed Ahmed Khan’s publication on the monuments of Delhi Asar al-Sanadid, published with woodcut illustrations in 1847. The woodcut of the Qutb Minar between pp. 128-9 is of this same view, complete with the broad path and the colonnade; the latter also appear in two large water-colours, one in the Visual Arts collections (Add.Or.3100, Archer 1972, no. 162) and another in the Marquis of Dufferin and Ava’s collection (reproduced Welch 1978, no. 51). While making use of both sources, the early photograph for the upper part of the painting and the earlier Indian artists’ views for the foreground, Ismail Khan has imposed his own sense of proportion and landscape.

The second topographical painting on ivory shows a view of the Mughal city of Shahjahanabad or Delhi from the north-west with the River Yamuna beyond. 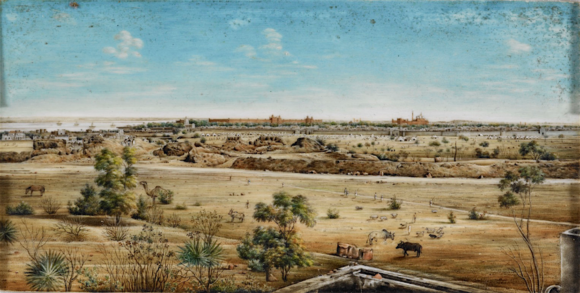 The view is taken from the Ridge and encompasses the northern and eastern walls of the city: St. James’s Church (built by Col. James Skinner and consecrated 1836), Shah Jahan’s Red Fort itself (finished 1648) and the older fort of Salimgarh (built 1545-54) beside it, and Shah Jahan’s Jami‘ Masjid (built 1650-56) are prominent. Lesser mosques visible include the Akbarabadi Masjid (to the right of the Fort, demolished in 1858) and the Fatehpuri Masjid (far right), both built by two of Shah Jahan’s wives.

Outside the walls along the river, there are seen the back views of the Qudsia Bagh (a garden built by Qudsia Begum c. 1748) and two British structures: Metcalfe House and Ludlow Castle on the extreme left, which were the private residence and the official home of the Agent and Delhi Commissioner Sir Thomas Theophilus Metcalfe from 1835-53. For details of these buildings, see Losty 2012, figs. 2 and 16. The tents visible on the tract outside the north wall are those of the military cantonment. Perspective is most skilfully handled in the recession of the foreground dotted with trees, rocks and animals. A second version of this view also on ivory is in the Victoria and Albert Museum (Dalrymple and Sharma 2012, no. 71). 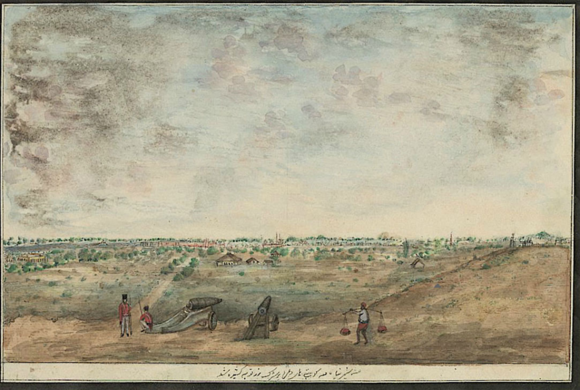 A similar view of Delhi from further back along the Ridge is placed in the ‘Delhi Book’ of Sir Thomas Theophilus Metcalfe, about which Metcalfe complains: ‘The artist in his endeavour to do much has been more minute than clear in his delineation.’ The two versions on ivory seem a riposte by Mazhar ‘Ali Khan himself, availing himself of the minute and delicate brushstrokes possible on this medium. He was the major topographical artist in late Mughal Delhi, painting many of the topographical views in Metcalfe’s ‘Delhi Book’ and also the great panorama of the city of 1846 (Add.Or.4126, see Losty 2012). While there is no direct evidence that Metcalfe was the patron of this view, any more than there is for the panorama, since both begin their views with Metcalfe House on the left it would seem very possible.