Like other East and South East Asian peoples, the Vietnamese believe in mythical and sacred animals, the most significant being the dragon, the phoenix, the turtle or tortoise, and the unicorn. These four sacred animals, which all represent auspicious blessings such as longevity and happiness, can be found on various objects in Vietnam ranging from imperial edicts and paintings, decorative figures in palaces and temples, to clothes and utensils. The four sacred animals illustrated below are depicted on two early 20th-century imperial Vietnamese illuminated scrolls held in the British Library.

Dragon (rồng)
The Vietnamese believe they are descendants of a dragon, and the birth of the first kingdom of the nation was closely related to this animal; therefore this mythical creature is probably the most important figure among the four sacred creatures (Quê Me 1988: 8). Legend has it that Lạc Long Quân, king of the dragons who lived in the water, married Âu Cơ, a fairy from the bird kingdom. She gave birth to 100 sons and the first-born son became King Hùng Vương of Lạc Việt, the first dynasty of  Vietnam. Hence there is a proverb saying the Vietnamese are “con rồng cháu tiên” or “children of the dragon and grandchildren of the fairy”.

To the Vietnamese, the dragon symbolises power, nobility and immortality. Since it represents power, it is a special symbol of the Vietnamese emperors. The dragon with five claws was reserved for imperial use, while one with four claws was for the use of royal dignitaries and high ranking court officials. For commoners, their dragons could only have three claws.

The Vietnamese dragon combines features of the crocodile, snake, cat, rat and bird. There are many Vietnamese legends or tales which are related to dragons; for example, the world-famous natural heritage site, Hạ Long Bay in northern Vietnam, is believed to be a creation of a dragon. Thăng Long, the former name of Hà Nội, also means “rising from a dragon”. Legend has it that in 1010, a golden dragon appeared alongside Emperor Lý Thái Tổ’s boat while he was visitting Đại La, and hence the place’s name was changed to Thăng Long.

Phoenix (Phượng Hoàng)
Whereas the dragon represents the emperor, a phoenix is used to represent the empress. Vietnamese folklore describes the phoenix as having the neck of a snake, the breast of a swallow, the back of a tortoise, and the tail of a fish. The phoenix’s song includes all the five notes of the pentatonic musical scale and its feathers include the five fundamental colors: black, white, red, green, and yellow. This elegant mythical bird symbolises grace, nobility, virtue and pride. According to myth, the phoenix burnt its nest and days later rose again from the ashes, and it therefore symbolises rebirth, regeneration and survival. It normally hides itself in time of trouble and appears only in calm and prosperous times, hence it also symbolises peace. During the Vietnam War, the CIA launched  Operation Phoenix in South Vietnam from 1968 to 1972, with the aim of eradicating the Việt Công. 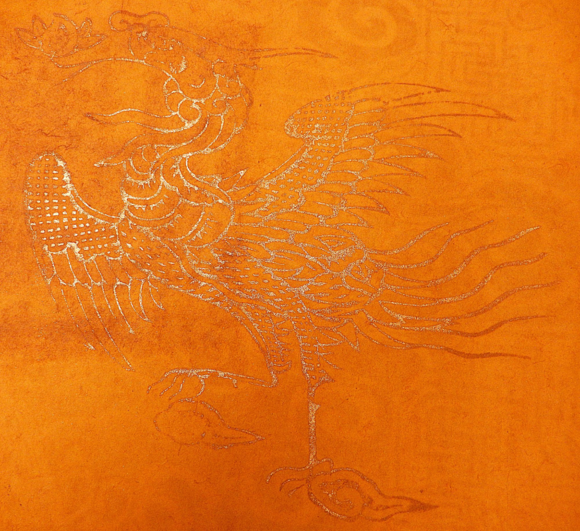 Turtle (rùa)
The turtle has a special place in Vietnamese culture and history. It symbolises longevity, strength and intelligence and is also closely related to the independence of Vietnam in the 15th century. Legend has it that Lê Lời, who led the Vietnamese to fight against the Chinese invaders in the 15th century, borrowed a sword from the dragon king. After he defeated the Chinese, he returned the sacred sword to the king via the latter’s disciple, a turtle which lived in a jade water lake. The Vietnamese, especially the Hanoians, believe that this lake is the Hoàn Kiếm Lake (Returned or Restored Sword Lake) in the middle of the city. Until recently, there was a highly revered resident, an old soft-shell turtle, named locally as Cụ Rùa (Grandfather Turtle) living in the lake. Cụ Rùa, who was actually female, was one of only four turtles of this breed known to survive in the world and it was believed that she was over a hundred years old. Sadly, on 19th January 2016, her lifeless body was found floating in the lake. The cause of her death is unknown and some Vietnamese have interpreted it as an inauspicious omen.

At the Temple of Literature (Văn Miếu) in Hà Nội, there are 82 figures of stone turtles with steles of doctoral graduates on the turtles’ backs. This was a mark of honour for those who achieved the highest degree of education in traditional Vietnamese society during the Lê dynasty. It also signified the importance of education in the society. 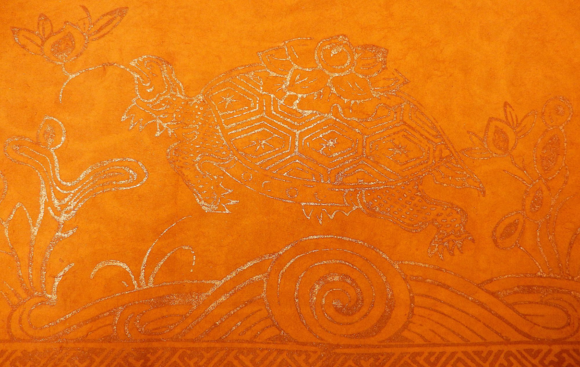 Turtle, illuminated on the reverse of Emperor Khải Định’s scroll, 1924. British Library, Or. 14665

Unicorn (Kỳ lân)
The unicorn symbolises peace, mercy and good fortune. Some also believe that it represents intelligence and goodness, and that the creature only appears on very special occasions. The unicorn is a composite creature combining elements of the horse, buffalo and dragon. The Vietnamese believe that it is a very strong and faithful creature, and therefore suitable for guarding temples and places of worship. 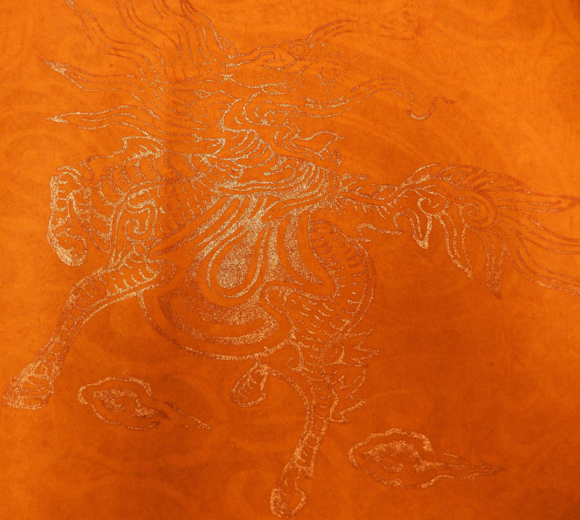 Unicorn, illuminated on the reverse of Emperor Khải Định’s scroll, 1924.British Library, Or. 14665

Posted by Annabel Gallop at 5:01 AM