To celebrate Passover 2016 and the launch of our new website 'Hebrew Manuscripts', Ilana Tahan, Lead Curator Hebrew and Christian Orient Studies, writes about the Polonsky Foundation and its role in the Hebrew Manuscripts Digitisation Project. 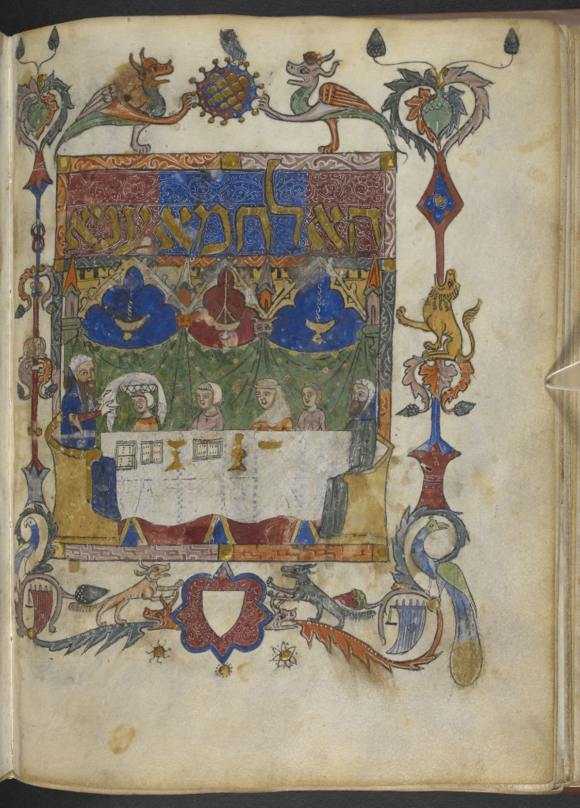 Philanthropy plays a vital role in our modern world. When the resources of arts, heritage and cultural organizations are limited, the gaps can sometimes be filled by those who have the means to do so; in this way, the contributions of benefactors and philanthropic bodies have done much to advance and improve the business, culture, education and welfare of many communities around the globe.

Among the philanthropic organisations the British Library has collaborated with more recently is The Polonsky Foundation, which aims at advancing higher education in the humanities and social sciences, and equally, at promoting the arts in the UK, USA and Israel.  Digitisation of rare collections in major libraries of the world is a signature programme of The Polonsky Foundation and reflects its commitment to the preservation and democratization of knowledge.

I have been very fortunate to meet Dr Leonard Polonsky on several occasions in the past. My first and most memorable encounter took place in November 2011 when he paid a visit to the British Library. Showing guests treasures from the Library’s Hebrew collections has always been an immense privilege, and throughout all the years I have been working for this amazing organisation, I have unfailingly done my utmost to showcase collection items that would not only impress the guests with their illuminated embellishments, but would also generate questions and a lively discussion. 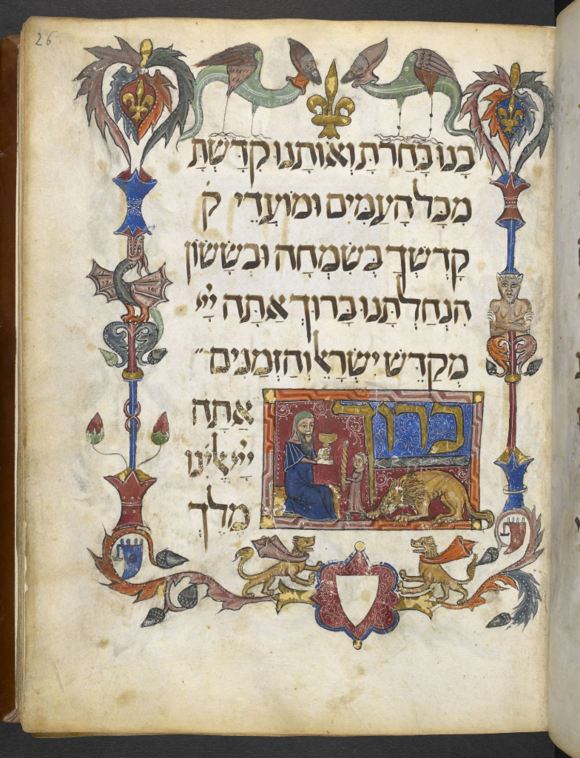 Dr Polonsky showed genuine interest in what was on display that day – a volume of the sumptuous Lisbon Bible, the intriguing San’a Pentateuch, and the unparalleled Barcelona Haggadah. Following that meeting and the subsequent submission of proposals, the Foundation agreed to support the Hebrew manuscripts project in 2012. This significant three-year project, which started in earnest in the summer of 2013 after dedicated project staff had been recruited (a Project Manager, a Cataloguer and a Project Support Officer), is due to end in June this year. It has focussed on digitizing cover to cover some 1300 unique manuscripts from the Library’s Hebrew collection, making them freely accessible on-line to a global audience.

Delivering the project has been challenging but we have learnt a great deal, particularly how to resolve problems swiftly, meet deadlines, and work efficiently as a team and collaborate with colleagues across the Library. So far we have made excellent progress and the Hebrew Manuscripts Digitisation Project is nearing completion.   Almost 800 out of the 1300 manuscripts digitised as part of the project, including nearly 70 scrolls, are already available on the Library’s Digitised Manuscripts site.

A new Hebrew web space will be launched at the end of April and will contain articles and images on specific themes, collection items, items of the week, videos and 3D modelling of selected objects. We are confident that this hub will be a great success and will showcase the gems of the Library’s Hebrew manuscript collection.

I would like to extend a huge thank you to my colleagues who have been working assiduously to deliver the Hebrew Manuscripts Digitisation Project, and by so doing have facilitated worldwide access to a valuable and unmatched learning resource. This worthy initiative would not have been possible without the immense kindness and judicious vision of The Polonsky Foundation, to which goes our profound and wholehearted gratitude.

Some of my favourites—which I showed Dr. Polonsky back in 2011—are featured below. Click on the hyperlinks to go directly to the digitised images. 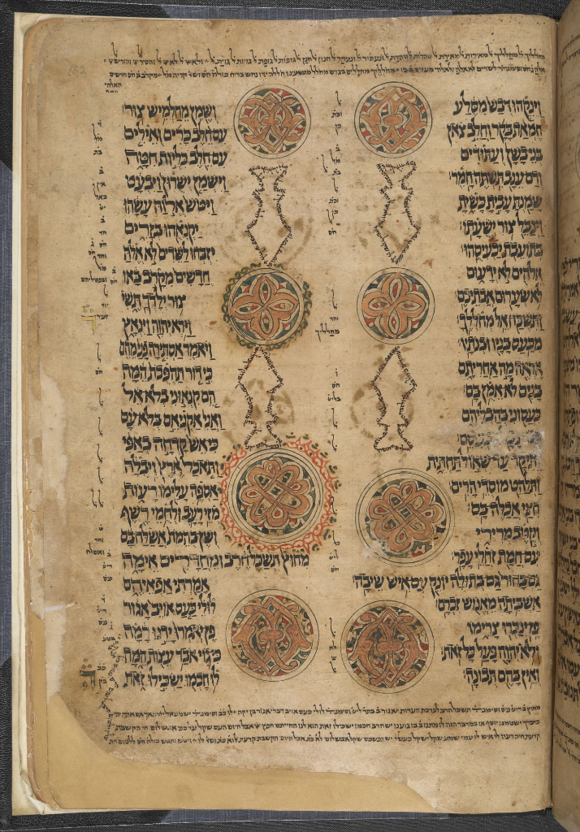 The San'a Pentateuch. San'a, Yemen, 1469. Section from Shirat Ha'azinu (Give Ear; Deuteronomy:32) the lyrical poem Moses recited in front of the Israelites before his death. The central decoration consists of micrography (patterns outlined in minute script) and medallions inspired by Islamic art (British Library Or.2348, f. 152r ) 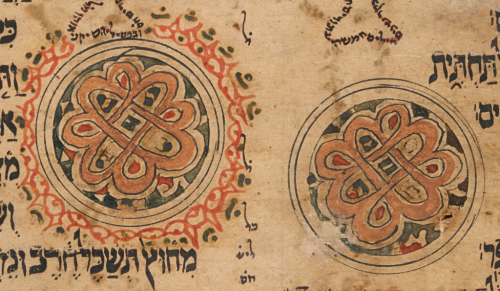 Detail of Or.2348, f. 152r,  showing the decorative medallions inspired by Islamic art 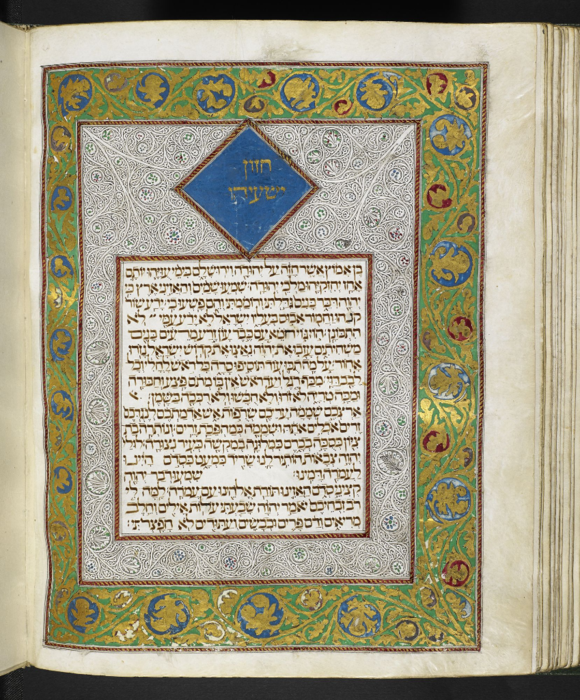 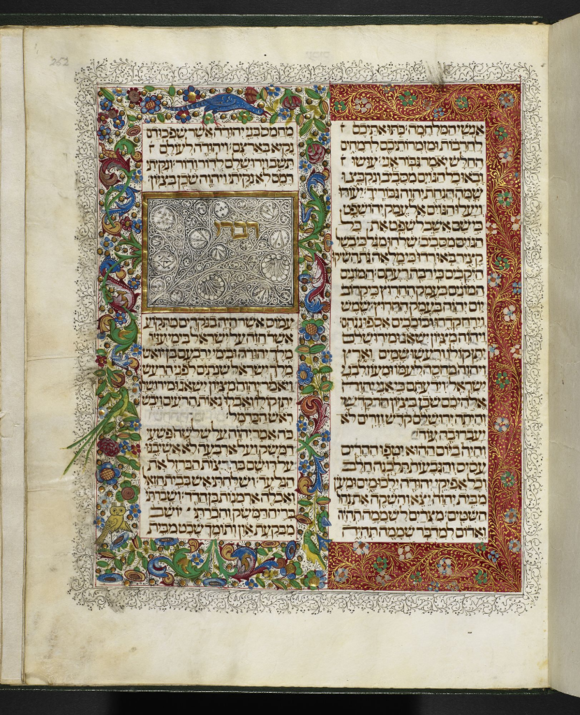