POSTSCRIPT from editor: This manuscript has now been digitised and can be viewed online

While cataloguing the British Library’s collection of Arabic manuscripts from West Africa (see BL blog passim) I came across a very strange item. This manuscript, Or.6557, was given to the British Museum Library (the forerunner of the British Library) by a Muhammad Shami on the 10th of October 1903 and catalogued the following year. According to a slip of paper pasted on the blank recto of the first folio in the handwriting the donor, this work is a “book on Reml [Arabic: ʻIlm al-Raml, meaning divination by sand] and magic and some of austronomy by Saidi Saeed Abdoul Naim” with the date of composition given as 1202AH (1788 AD). The text block is loose-leaf, as is often the case in North and West Africa, and protected at either end by squares of animal hide. 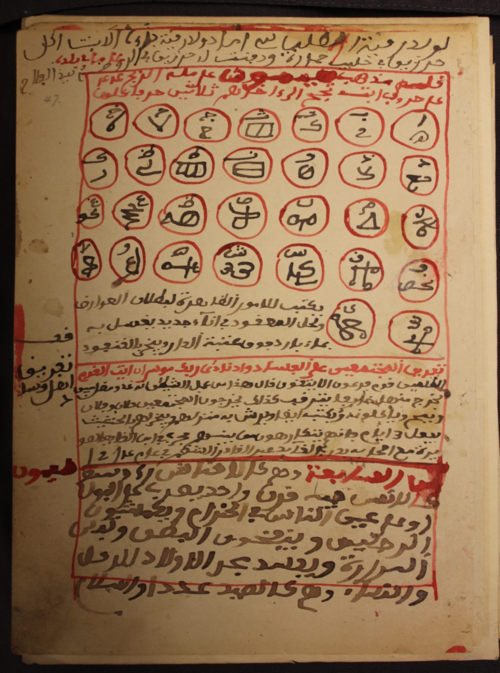 The reason for the work’s composition seems to be to detail practices for the curing of various physical and mental conditions. Throughout the work, subjects are itemised in the left-hand margin, suggesting ʻAbd al-Nāʼim used it as a reference guide during his practice. The lack of any clear order nor beginning or conclusion, along with various small pieces of paper scattered throughout the text block featuring simple arithmetic, receipts or aides-memoires, suggests that the work was compiled gradually over the course of ʻAbd al-Nāʼim's career and was meant to be a private document. The handwriting of  ʻAbd al-Nāʻim seems to be a mix of several different styles and –confirmed by the mention of various North African place names- it appears he travelled widely in search of learning, or perhaps new patients.

True to the words of the donor, among the subjects covered are sand divination and astronomy. However, the work is a veritable compendium of all kinds of knowledge, ranging from the purely scientific to the very occult. There are sections on alchemy, the fabrication of potions and talismans, the exorcism of demons and jinn and the voiding of black magic, to the treatment of a plethora of medical complaints, from sore eyes to bad backs. Toward the end of the work, ʻAbd al-Nāʻim also quotes versified works by the Egyptian al-Ḍimyātī, whose poems are still renowned in North Africa for their therapeutic properties. ʻAbd al-Nāʻim refers several times to the use of hashish as well as other recognisable drugs and chemical compounds, often noting that he has tried many of the cures on himself. 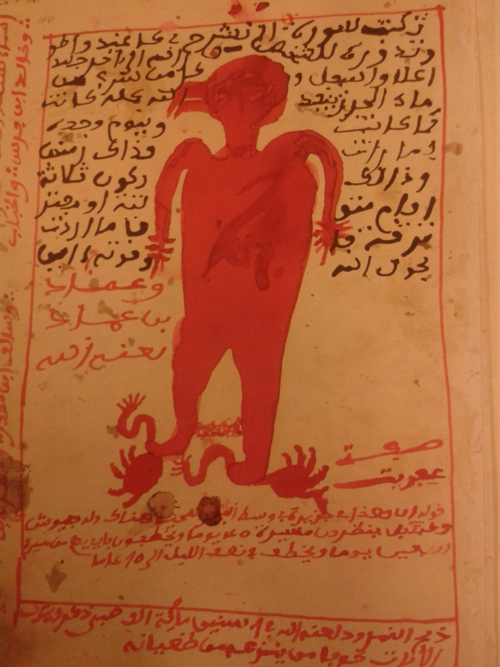 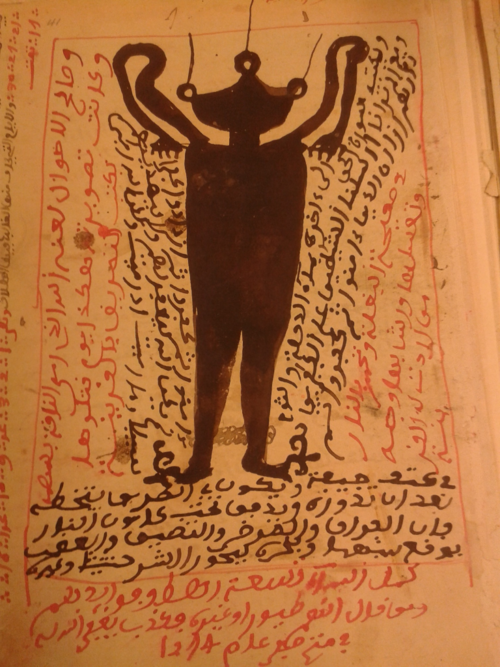 Two of the “nine family heads”. Text in red indicates that these are instructions for performing the exorcism, while the text in black gives their personal name and a description (British Library Or.6557, ff. 40r and 41r)

However, the most impressive aspect of the work is its full-page illustrations. The work features nine full-page illustrations of beings ʻAbd al-Nāʻim calls “tisʻa rahṭ”. This phrase can be traced to the Qur’an 27:48 in the line “And there were in the city nine family heads causing corruption in the land”. In the tafṣīr of al-Jalālayn, this city is identified as Thamud and the “corruption” is described as “sins such as clipping dinars and dirhams”. From this obscure Qur’anic reference, ʻAbd al-Nāʻim elaborates the story, giving each “family head” a personal name, listing his attributes, signs of the interference of this entity in the world of the living and the means to exorcise or remove him. His representations of each “family head” –executed in black or red ink- are highly original, ranging from a horned demon to a long-beaked red bird, to a long-armed creature with a brazier for a head. If these forms are not unsettling enough, ʻAbd al-Nāʻim ends his section on the “nine family heads” with the warning that “whoever says that they are birds or anything else has lied for I saw them [myself] in Safar 1214 (July/August 1799)”. 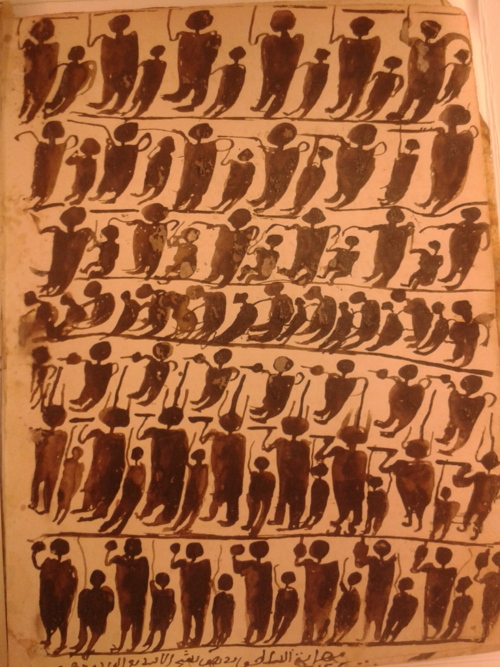 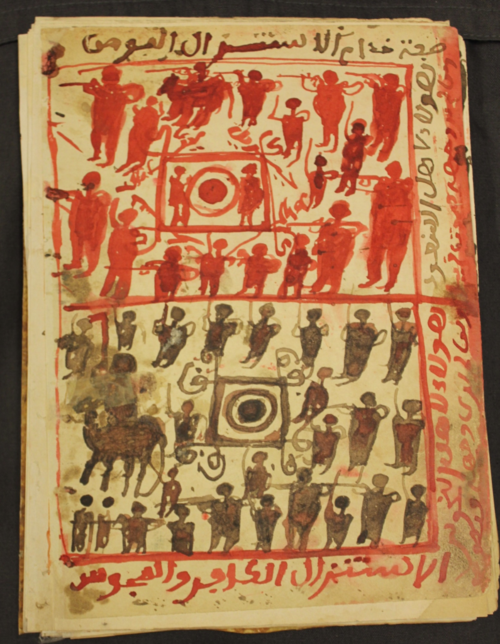 Aside from numerous astrological and alchemical diagrams and talismans, the work also includes many pictorial representations of jinn. ʻAbd al-Nāʻim’s illustrations are again highly idiosyncratic and he has taken pains to differentiate each jinn from the next. Some sprout three horns, some are stooped over while others stand tall, thrusting batons or other implements; some appear to be holding firearms while others ride on beasts of burden.

There is still much work to be done on this item -which I believe must be a unicum- and no doubt further textual analysis will shed more light on the circumstances of its composition.

My thanks to Constant Hamès, with whom I have corresponded concerning this item.

Posted by Ursula Sims-Williams at 10:43 AM