Can’t judge a book by its cover? Perhaps you can!

If you look at how museums choose to digitally engage with their audiences, especially in the past few years, it is evident that 3D technologies have become standard practice within their larger digital outreach. There is an increasing tendency to utilise 3D models and prints to enhance online resources featuring collection items, or as exhibition materials in galleries. Some museums still have limited experience of utilising 3D technologies, while others do it on a large-scale and on a regular basis. Overall, the 3D trend has already had a great impact on the cultural heritage sector as a whole. However, while a museum is more of a usual suspect for these novel technologies, libraries are perhaps less so. They are perceived to hold books, manuscripts, documents, or in short – compilations of two-dimensional text. But nothing physical that a library holds is in fact two-dimensional, and some items kept in libraries may be of unanticipated nature. Libraries have more potential to engage with 3D modelling and printing than one would expect. In the following examples, move your mouse over the object to see the item in 3D.

What does it actually mean, to 3D model and print items? A 3D model is a full representation of an object that can be viewed and manipulated by a user in a digital space. There are two main ways to digitise and present real world objects: 3D scanning (or laser scanning) and photogrammetry – image based modelling. While the former method is more expensive and requires expert knowledge, the latter is affordable and easy to implement. If 3D modelling takes an object from the physical into the digital world, 3D printing takes it back into the physical. 3D printing is the process of using a 3D model to create a physical object via a variety of printing methods, such extrusion of plastics, resins, and other materials. One of the ways a 3D printer works is actually similar to how an inkjet printer works, but instead of using ink it uses a filament – laying the filament down and slowly building up a 3D structure.

3D technologies used in the cultural sector have many benefits. 3D models and prints can be supplemental tools for visualisation, enhancing the experience of viewing an object. They can be used in physical as well as virtual exhibitions online, as well as enhance a 2D collection catalogue hosted online or feature in other online content. In this way, curators and educators can use 3D data to tell a story, online visitors can explore the collections in a new and stimulating way, and there is a potential to engage the larger, international public. 3D prints can be displayed at touring locations, used in education systems as sustainable objects for teaching and training (instead of the real items), and used as event giveaways. There is also a commercial potential for prints, as replicas of objects can be sold, full scale or in miniature and in different materials and colours. In short, 3D technologies change how people access and engage with cultural resources.

All this is hardly news for the museum sector. What’s innovative here is that the British Library is joining the game too. It makes perfect sense for such a large library to re-examine its traditional approach to the delivery of information and to keep seeking novel means of public and scholarly engagement – especially in light of the huge variety of items it holds. Aside from the more predictable formats (books, newspapers, documents, maps), the Library’s physical collection spans from inscribed bones, seals, scrolls, wooden cases, fine textiles, and folding books with covers embellished with gold and jewels, to wooden cabinets, chests, ship models and even rifles! Some collection items such as manuscript chests cannot be called up by readers from the Library’s basement – they are too heavy and too fragile. And as most of the Library’s collection items are not on display in one of its galleries, 3D digitisation affords the opportunity to bring these items into the virtual light.

In the past year I’ve been involved in creating several 3D models for two British Library projects: the Hebrew Manuscripts and the Oracle Bones digitisation projects. The former digitised 1,300 Hebrew manuscripts – codices (manuscripts in book format), scrolls, charters and loose folios spanning 1,000 years from the 10th to the 20th century CE, mainly from Europe and the Middle East. This rare collection of manuscripts represents all the areas of Jewish knowledge, whether religious or secular.

The latter project digitised more than 480 Chinese ‘oracle bones’, dating between 1600 and 1050 BCE (Shang Dynasty). These are the oldest objects in the Library, including mainly shoulder animal bones and some tortoise shells’ fragments, bearing the earliest known examples of Chinese writing. Used in divination rituals, the bones were inscribed with questions posed to ancestors, the answers to which were interpreted from cracks formed in the bones when heated. The digitised Hebrew manuscripts and oracle bones can be viewed on the British Library’s Digitised Manuscripts website.

The method that we use for 3D modelling at the Library is photogrammetry – creating a 3D structure from a series of overlapping 2D images. Before the imaging started, the items were called up from the Library’s storage facility, which closely monitors temperature and humidity levels. We benefited from the Imaging Studio’s advanced photography and lighting equipment and our only further investment in equipment was a £6 turntable. In the case of the oracle bones, which are mostly rather flat objects, conservator Karen Bradford created stands for them to be placed on securely, in a way that would allow for optimised photo capture but also protect the bones. Karen was present throughout the imaging process, to make sure the bones were safely handled. 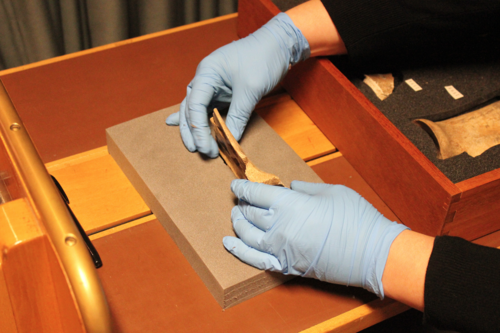 The imaging process began with taking photographs of each item from different angles, with sufficient overlap. In order to do that, each object was placed on a turntable and the camera was mounted on a tripod. We rotated the turntable at roughly 5-10 degrees with a photo taken at each position. After completing a 360-degree circle the item was turned to its reverse side and the process was repeated. Once enough photos had been taken, the images were white balanced and then masked ready for the modelling process in Agisoft PhotoScan. When the models were complete, they were published to Sketchfab. The oracle bones were also printed by the 3D expert ThinkSee3D, who made sure the Chinese writing remains as legible as possible. 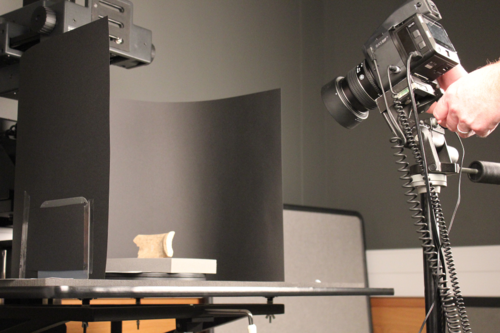 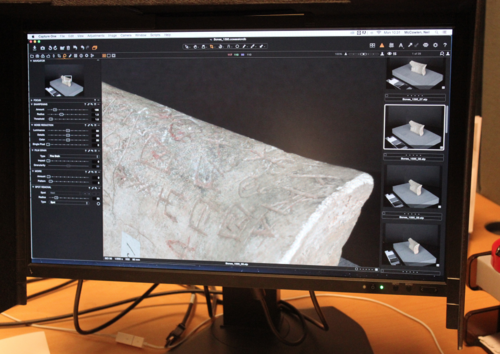 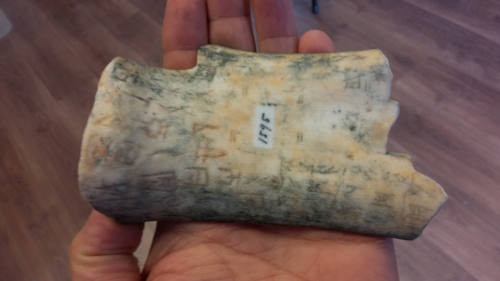 3D modelling at the British Library is still in its early stages, but the potential is immense. It suffices to make your way to Asian and African Studies on the third floor in the British Library building at St Pancras, and look at the current exhibition outside of the Reading Room, called ‘More than a Book’. Southeast Asian manuscripts come in different shapes and forms, such as an Indonesian divination manuscript inscribed on a bamboo container, or 19th-century wooden or bamboo Thai title indicators, which helped identify and retrieve manuscripts stored in large numbers in wooden cabinets in temple libraries (see for example Or 16555). Thai manuscripts were stored in boxes, chests or cabinets placed in Buddhist temple libraries or in palaces, and often decorated in red and gold and carved with beautiful designs. The Library holds six such magnificent items from the 19th century, some of which are displayed inside and outside the Asian and African Studies Reading Room, and others – in the basement (e.g. Foster 1057 – weighing over half a ton!). 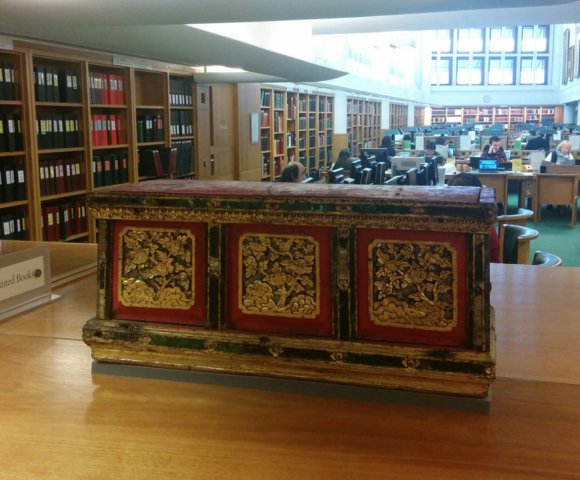 The Southeast Asian exhibition offers just a small taste to what the department of Asian and African Studies has to offer to 3D enthusiasts. The department has three tiny printed Qur’ans. Due to their very small size, the text is almost illegible which indicates that these Qur'ans were probably not intended to be read. They may have been owned as protective talismans (hama'il) since one comes with a locket to be worn around the neck. Another possibility is that they were ornamental, much like a similar example found in Queen Mary’s Doll House in the Royal Collection.

Opening up these tiny books and turning their pages in order to digitise their text could put pressure on their bindings and would therefore be harmful from a conservation point of view. Modelling these delicate Qur’ans may present a safer way to display these online – and to some extent a more engaging one. Other interesting three-dimensional items from the Arabic collections are three ox bones bearing magic Arabic inscriptions. These have undergone multispectral imaging by Imaging Scientist Christina Duffy, and have an unmistakable potential to be viewed in 3D. And when going back to the collection that initially inspired us to do 3D modelling – the collection of Hebrew manuscripts – there are so many more candidates: codices with interesting bindings, or intriguing scrolls such as Scrolls of Esther, telling the story of rescuing the Jews of Persia from an annihilation plot. 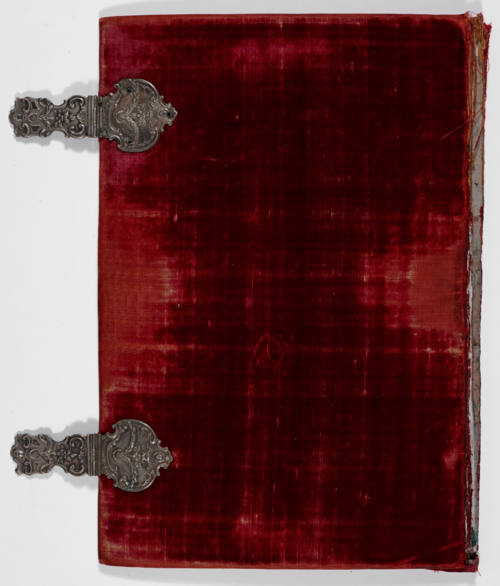 These examples are just the tip of the iceberg of what the British Library has to offer, 3D-wise. Some of its most famous and unique items (outside of Asian and African Studies) which would be wonderful to view in 3D include Elizabeth I prayer book, a rare item with its original 16th-century binding and embroidery, and the 8th-century St Cuthbert Gospel, the oldest intact European book. I’m very hopeful that the existing models and prints will inspire an increased use of 3D technologies at the British Library as well as other libraries worldwide.