The Perak Times: a rare Japanese-occupation newspaper from Malaya

The British Library holds what is probably the most important collection in the world of early printed works from Malaysia and Singapore, from the start of printing in the region in the early 19th century, right up until the independence of Malaya in 1957 and of Singapore in 1963. The strength of the collection is mainly due to colonial legal deposit legislation, which started with the Straits Settlements Book Registration Ordinance of 1886. The Ordinance required publishers in Singapore, Penang and Melaka to deposit three copies of each work registered, one copy of which was to be sent to the library of the British Museum (now the British Library) in London. All types of publications were despatched, from religious works and literature to school text books and ephemera, as well as complete runs of newspapers and periodicals, in all the languages of the region: Malay, Chinese, Tamil, Arabic and English.

The only significant gap in this coverage of 150 years of printing from the Malay peninsula and Singapore is the period of the Japanese occupation during the Second World War, from late 1941 to 1945. Not surprisingly, during the war years almost no publications were sent to London, and sources from this crucial period are generally only found in Malaysian and Singapore libraries.

The British Library was therefore delighted and very grateful to receive as a donation copies of a rare Japanese-occupation era propaganda newspaper. The Perak Times was published in Ipoh, Perak from 1942 until at least the end of 1943. It was a daily newspaper in English, usually consisting of just one broadsheet page, which appeared every day of the week except Sunday. According to the colophon the paper was printed and published at 62-64 Belfield Street, Ipoh by John Victor Morais (1910-1991), a prominent Malaysian writer and journalist of south Indian origin, who later edited the Malaya Tribune and the Ipoh Daily News. Until recently, the only known copies of The Perak Times were held in the National Archives of Malaysia in Kuala Lumpur and in the Penang Public Library. Now a four-month run, from April to July 2603 (i.e. 1943) can be consulted in the British Library (ORB.99/234). 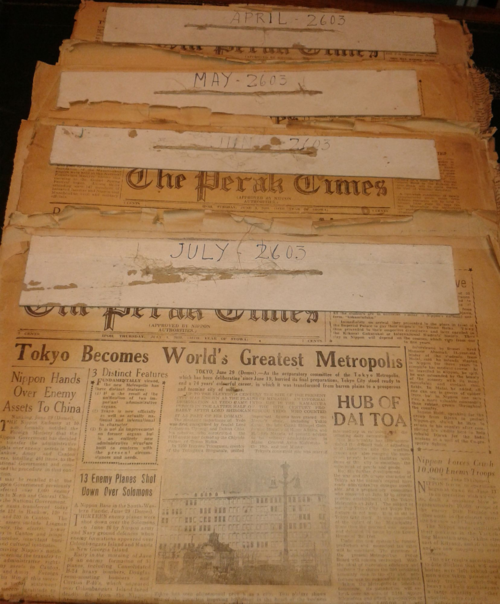 According to the historian of the Japanese occupation of Malaya, Paul Kratoska (1998: 143), the Japanese placed the press in occupied Malaya under the control of the Domei Press Agency, which published newspapers in Malay, Tamil, Chinese and Japanese as well as in English. Looking through the individual issues of The Perak Times, the front page headlines mainly trumpet the war triumphs of Japan and her Axis allies Germany and Italy, with headlines like 'Our Troops Wipe Out Main Enemy Force On Indo-Burmese Border' (9 April 2603), 'Another Smashing Attack On Enemy Fleet' (17 April 2603) and 'Rommel Determined To Fight To  Finish' (24 April 2603), while also emphasizing Japan's alliances with Asian nationalist and anti-colonial parties: '"Burma Must Forge Ahead With One Voice, One Blood & One Command" - Dr. Ba Maw' (19 April 2603); '"No Going Back, No Faltering" Subhas Chandra Bose Broadcasts To India' (28 June 2603); and 'Premier Tojo In Manila: Exchanges Views About Philippine Independence' (13 July 2603).

The back page of The Perak Times usually contained more local news, including results of sporting fixtures (soccer, hockey and keiba, horse racing) as well as advertisements for entertainment. Kratoska reports that at the start of the Japanese occupation there were 23,000 reels of American, English, Chinese, Malay and Indian films in circulation in Malaya, and these continued to be shown for the first year and a half. Thus The Perak Times contains advertisements for 'Only Angels Have Wings' starring Cary Grant and Jean Arthur; a Laurel and Hardy film, 'Star On Parade'; and the film of the Daphne du Maurier novel, 'Rebecca', as well Cantonese, Hindi and Tamil hit movies. It was only on 1 September 1943 that the Japanese ordered cinemas to stop screening British and American productions (Kratoska 1998: 141). Of greater local historical interest are the numerous performances in July 1943 by the Sri Arjuna Bangsawan group, including the shows 'Anak Di Luar Nikah', 'Raja Laksamana Bintan', 'Pulau Pandan Gunung Diak [sic, i.e. Daik?]' and 'Dan Dan Stia' [i.e. Dandan Setia], described as 'That Grand Malai Historical Play You've All Been Anxiously Waiting To See! To Be Completed In 5 Nights'. 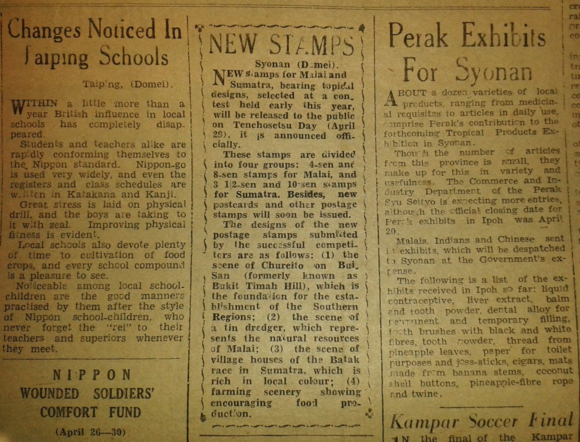 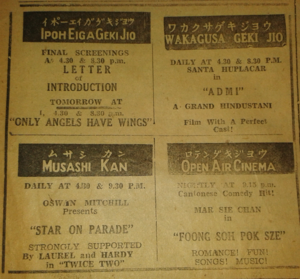 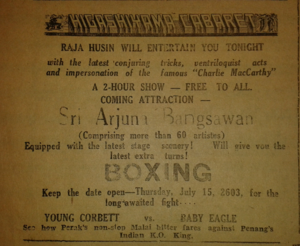 Advertisements for American, Indian and Chinese films (29 May) and for a Sri Arjuna Bangsawan performance (12 July) in Ipoh in The Perak Times in 1943.

The copies of The Perak Times have been donated to the British Library by Ian Sampson, who found them amongst his family papers. Ian’s father, Geoffrey Sampson, was an engineer who had worked in Malaya for the Public Works Department (PWD), and Ian himself was born at the General Hospital in Alor Setar, Kedah, in May 1941, just before the Japanese invasion at the end of that year. The papers are bound together in months, and a stamp on one issue reads 'District Office Dindings', indicating the origin of this collection. As can be seen from the photos above, the paper is very brittle, and we plan this year to digitise these historic copies of The Perak Times, to ensure that they will continue to be accessible as a valuable resource for this period of Malaysian history. Ian Sampson, with copies of The Perak Times which he has kindly donated to the British Library.

Posted by Annabel Gallop at 3:21 AM