The number of Vietnamese manuscripts in the British Library is relatively small in comparison with other Southeast Asian manuscript collections, but nonetheless represent well the writing methods and formats of the region. Since Vietnamese literary and historical styles were heavily influenced by Chinese traditions, they shared some similar characteristics. First and foremost, Vietnamese literati studied and wrote in Chinese (chữ Hán in Vietnamese), even though the Vietnamese later invented a simplified script based on Chinese script (chữ Nôm in Vietnamese). Thus Vietnamese manuscripts in our collection are all written in chữ Hán or a mixture of chữ Hán and chữ Nôm. Secondly, the Vietnamese also wrote on scrolls as well as in bound books, in the same fashion as East Asian literary cultures.

In this post I will present five outstanding Vietnamese scrolls in the British Library, dating from two different periods - the late 18th century and the early 20th century - and explore their historical and cultural background. All are imperial documents, illuminated with bold dragon patterns, symbolising the emperor and imperial power.

These two scrolls are important historical documents of the Tây Sơn rulers (1772-1802) who ruled Vietnam briefly in the late 18th century. The first scroll (Or.14817/A) is written in Hán-Nôm characters on orange paper decorated with a large dragon, and bears the royal seal stamped in red ink. This scroll is in good condition with all of the text still intact, and can currently be viewed in the small exhibition of Southeast Asian manuscripts, 'More than a Book', on display in the British Library at St Pancras in London. A second scroll (Or.14817/B), however, is slightly damaged as can be seen in the image shown above, and though the day of the month (20) can still be read, the part of the text naming the month and year is missing. However, Trần Nghĩa - a Vietnamese scholar and an expert in Hán-Nôm - who inspected these two scrolls in 1995, is of the opinion that considering the content and style of writing, these two scrolls were issued at a similar date and for the same occasion.

The content of the first scroll reveals that it was issued by Emperor Cảnh Thịnh on 1st May 1793 to Lord McCartney, the head of the British diplomatic and commercial mission to China in 1792. In 1793 the McCartney Mission, headed by Lord McCartney, was on its way to China to establish commercial relations between Britain and China, when it was struck by storm off the coast of Central Vietnam. Lord McCartney sent a delegation to the Emperor seeking help and provisions. In return, the Emperor provided rice and other food and sent this scroll to welcome the mission.

Emperor Khải Định (1885-1925, r. 1916-1925), who considered Vietnam to be a backward country in need of western technology, was criticised by the nationalists for his pro-French attitude and extravagant lifestyle. We hold three imperial edicts issued during his reign and all three are elaborately decorated.

On the occasion of his enthronement, Emperor Khải Định issued an edict dated March 18, 1917 to raise the status of the spirit of Đông Hái of Hậu Bổng village in Hải Dương province (Or. 14631). Đông Hải was upgraded to a mid-rank god (Trung đẳng thần), reflecting the Vietnamese tradition of deification of spirits or gods. These spirits could be nature deities, community or kinship tutelary deities, national heroes, or ancestral gods of a specific family, and are classified into different ranks of status. The edict was written on yellow paper, and measures 123 x 51 cm. The front side has a dragon pattern with silver scales and bears an imperial seal. On the reverse, unlike other scrolls in our collection, there are two patterns of flower pots and symbols of longevity instead of the usual four mythical creatures.

On the occasion of his 40th birthday, Emperor Khải Định issued an edict on July 25, 1924 to honour the spirit of Phạm Công of Văn Lâm village, Hải Dương province (Or. 14632). The edict was written on yellow paper and is finely decorated with different patterns. The main design in the middle of the paper is a gilded dragon and an imperial emblem, and the edict bears an imperial red seal. On the reverse are the four mythical and sacred annimals, namely the dragon, phoenix, turtle and unicorn, all beautifully painted with gilded outlines.  There are two symbols of longevity in the middle of the scroll, which measures 135 x 52 cm. 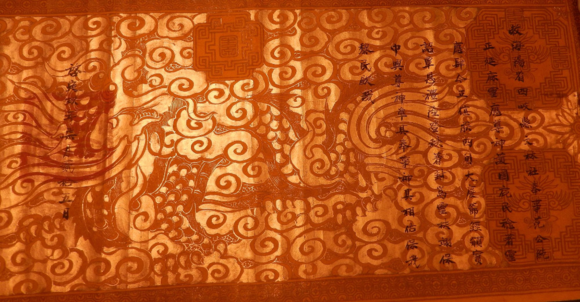 On the same day, Emperor Khải Định issued a further edict (Or. 14665); this one was to raise the status of the spirit of the god Nam Hải of of Hậu Bổng village in Hải Dương province (the same deity named in Khải Định’s edict of 1917) to the highest rank. He became God of the South Sea. The edict is written on gilded yellow paper in the same fashion as the other edict issued on the same date (July 25, 1924), with a bold golden dragon design. The reverse was decorated with the four gilded mythical and sacred animals and also two symbols of longevity. The designs on this scroll have been discussed in another blog post on 'Mythical creatures in Vietnamese culture'. 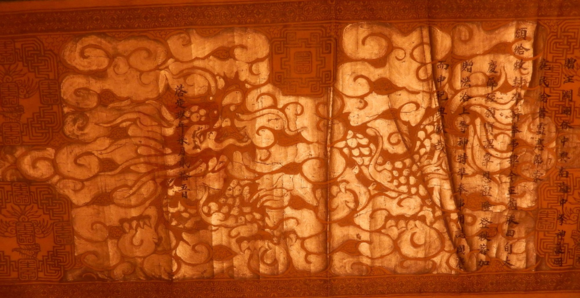 Dragon designs differed from one dynasty to another. Nguyễn Ngọc Tho from the University of Social Sciences and Humanities, Vietnam National University, points out that in comparison with the Japanese dragon, the Vietnamese dragon is characterised by three main features: (1) non-standardisation, (2) diversity, and (3) constant change and development.  For example, the Ly dynasty’s dragon (11-13th century) was a long snake-like figure with non-scale and zig-zag curly body.  During the Trần dynasty (1226-1400) the dragon’s body became bigger and fatter, the claws became sharper and the head and the neck were irregularly changed, while the dragon tail remained unchanged. From the Le dynasty (1428-1527 and 1599-1788) onward, the dragon was greatly influenced by the Chinese exemplar, and therefore local features tended to recede. After 1945, with the end of the last feudal dynasty, the noble significance of the dragon became weak and gradually disappeared  (Nguyễn 2015: 11-13).

With thanks to Ke Wang for his help in deciphering Chinese characters.

Posted by Annabel Gallop at 6:50 AM