The sheets were created between 1890 and 1940, and comprise sketches, surveys and hand-drawn finished maps held at the British Library in the so-called War Office Archive. A dedicated webpage provides easy access to the archive with links to catalogue records and high-res images, which can be viewed on the British Library website or downloaded free of charge from Wikimedia Commons. A Google Maps page provides a geographical index to the sheets. 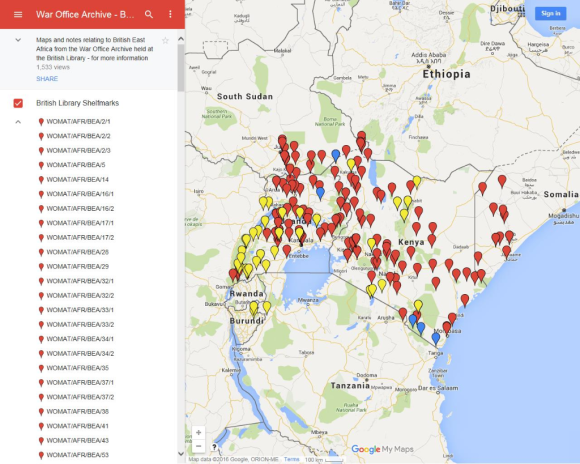 A geographical index to sheets in the archive, plotted in Google Maps

The archive is a rich resource not only for researchers of African, colonial and personal history, but also for environmentalists and climate scientists. Many of the sheets represent the earliest systematic surveys of East Africa, and provide historical ethnographic information relating to populations, settlements and regions along with details of historical land use, limits of vegetation, hydrology and much else. 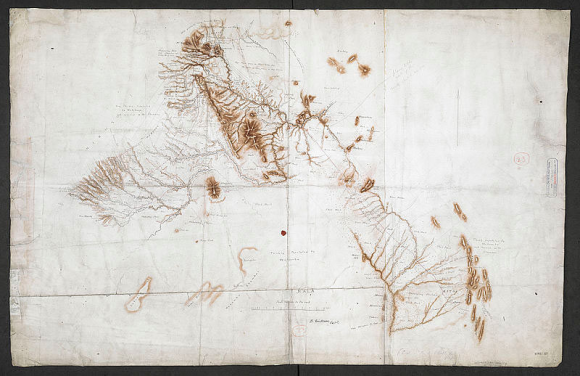 This sheet (WOMAT/AFR/BEA/54) was created in 1901 and shows a region to the north and east of Nairobi, which had been founded just two years before – the western limit of detail on the map is approximately seven miles from the centre of the city today. The sheet gives the names and locations of ethnic groups and settlements, and describes areas of habitation, cultivation and vegetation immediately prior to European settlement. 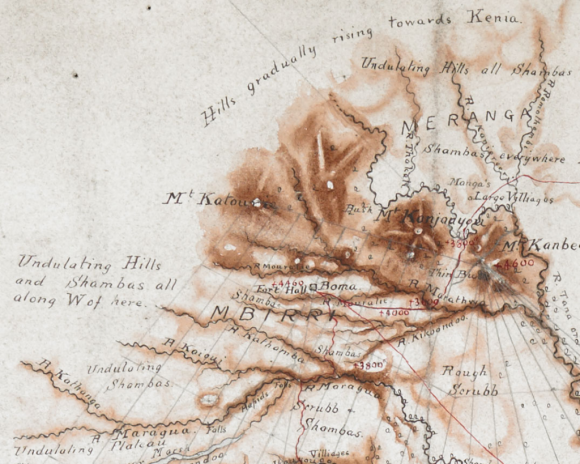 Detail of (WOMAT/AFR/BEA/54) showing the region around Fort Hall.

At this time the British Government strongly promoted settlement along the length of the newly-constructed Mombasa to Lake Victoria railway line which ran through Nairobi to the south, and the map’s creator, Captain Bertram Dickson, was sent to assess the region’s suitability for settlement and agriculture. The dry tone of his report  is at odds with the delicate inks and watercolours of the map, but the purpose of his expedition is clear:
‘Wherever the surface is flat swamps are found, probably owing to the enormous rainfall, but they could be easily drained… The hills are rough and rocky...and as there is no water on them it is unlikely they could be of much use in agriculture… The soil only needs cultivating to grow almost anything...’
Dickson reveals other, more immediate obstacles to settlement, but these are quickly passed over:
‘Owing to the hostility of the natives at Meruka, it was impossible to traverse this district thoroughly, but it appears that the passage from the cultivated hills to the plains is here more gradual, there being no dividing line of forest…’ 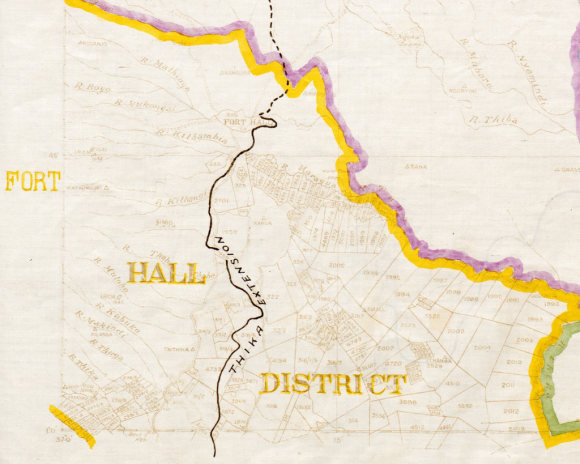 This later sheet shows how quickly the region was transformed in the years following. It forms part of a set of maps produced in 1924 by the Land Survey Department, Nairobi, and depicts the numerous parcels of land that had been created for sale or lease to European settlers.

The images in this post are made freely available under an Open Government Licence v1.0 (OGL).

Posted by Annabel Gallop at 3:53 PM