The Wise Collection: Acquiring Knowledge on Tibet in the late 1850s

The drawings in the British Library’s Wise Collection probably form the most comprehensive set of large-scale visual representations of mid-nineteenth century Tibet and the Western Himalayan kingdoms of Ladakh and Zangskar. These drawings were made in the late 1850s – at a time when the mapping of British India was largely complete, but before or around the time when Tibet began to be mapped for the first time by Indian Pundits. 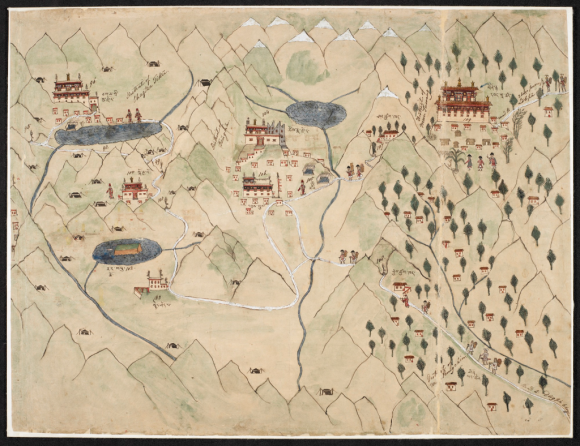 This map shows the border area between Tibet and today’s Arunachal Pradesh in Northeastern India and Bhutan. The right part of the map is oriented to the south (BL Add.Or.3017, f. 6)

The acquisition of systematic knowledge of Tibetan landscapes and societies became an ambitious goal for the British Empire in the 19th century. Such knowledge was often dependent on the aid of local informants. As a result the region was occasionally culturally represented and visualized by local people – such as in case of the Wise Collection. 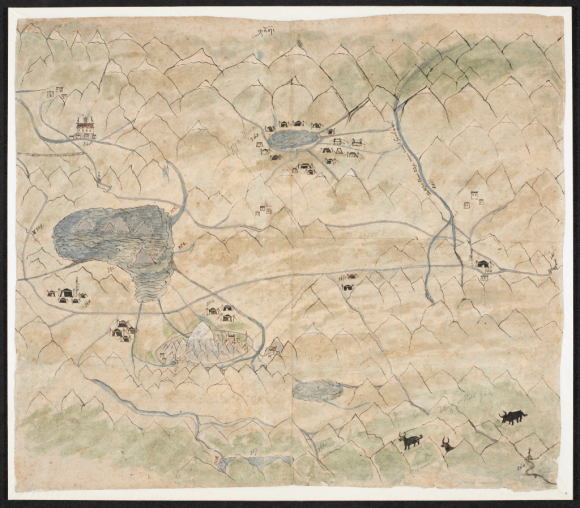 This map shows the area around Mt. Kailash in Western Tibet. Several lakes are depicted as well as market places and trading centres. The mountains with the white peaks on the upper part of the map represent the Himalaya - the map is oriented to the south (BL Add.Or.3015, f. 4)

Detail from the map above, showing Mt. Kailash and surroundings in great detail with the circumambulation path, monasteries, a lake, streams and a tall prayer flag pole

The story of the collection’s origin is a puzzle that has only become accessible piece by piece. The collection was named after Thomas Alexander Wise (1802-1889), a Scottish polymath and collector who served in the Indian Medical Service in Bengal in the first half of the 19th century. According to a typewritten note dating from the 1960s, the ‘drawings appear to be by a Tibetan artist, probably a lama, who had contact with Europeans and had developed a semi-European style of drawing.’I have recently uncovered one of the most important parts of the whole ‘Wise puzzle’ – the name of the Scotsman who commissioned the drawings. It was William Edmund Hay (1805-1879), former assistant commissioner of Kulu in today’s Northwest India. Charles Horne writes (Horne 1873: 28)

In the year 1857 one of the travelling Llamas [lamas] from Llassa [Lhasa] came to Lahoul, in the Kûlû country on the Himalêh [Himalaya], and hearing of the mutiny [this refers to the Indian rebellion in 1857] was afraid to proceed. Major Hay, who was at that place in political employ, engaged this man to draw and describe for him many very interesting ceremonies in use in Llassa, […].

William Howard Russell – former special correspondent of The Times – visited Simla in July 1858 and mentions in his diary that ‘Major Hay, formerly resident at Kulu, is here on his way home, with a very curious and valuable collection of Thibetan drawings’ (Russell 1860: 136). These statements most probably refer to the drawings that now form the British Library’s Wise Collection. At the current state of research no definitive statement can be made about the circumstances in which Wise acquired the drawings; most probably Hay sold them to him. The name of the lama who made the drawings also remains unknown, but I have started following the traces he left and hope to identify him one day. 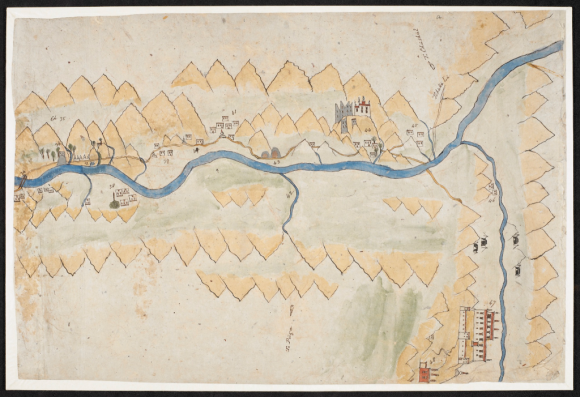 Detail from the map above with explanatory notes:

36: Remains of a very old fort. There were said to have been 3 sisters; one built a fort, a second erected 108 chortens [stupas], and the third planted the place with trees: there is this place. 37: A hot spring only visible in winter, as in summer when the river has swollen it over flows it.

The collection comprises six large picture maps – drawn on 27 sheets in total – which add up to a panorama of the 1,800 km between Ladakh and Central Tibet. They are accompanied by 28 related drawings illustrating monastic rituals, ceremonies, etc. referring to places shown on the maps. Placed side by side, the maps present a continuous panorama measuring more than fifteen metres long. Places on the maps are consecutively numbered from Lhasa westwards. Taken together there are more than 900 numbered annotations on the drawings. Explanatory notes referring to the numbers on the drawings were written on separate sheets of paper. Full keys exist only for some maps and for most of the accompanying drawings; other drawings are mainly labelled by captions in Tibetan, while on others English captions dominate. Some drawings lack both captions and explanatory texts. Watermarks on the paper together with internal evidence from the explanatory notes and from the drawings themselves support the fact that the drawings were created in the late 1850s.

The left side of this map shows an illustration of Gyantse in Southern Tibet. On the right side the Yamdroktso Lake and the confluence of Yarlung Tsangpo River and Kyichu River as well as the Chaksam ferry station are depicted. This map is oriented to the north. (BL Add.Or.3016, f. 3)

Detail from the map above, showing amongst others the Yamdroktso Lake, the Yarlung Tsangpo River, several monasteries and mountain passes. The Chaksam ferry is depicted in great detail – showing the iron chain bridge, a horse head ferry and a hide boat

Compared to maps created by Westerners the picture maps in the Wise Collection are not primarily concerned with topographical accuracy, but provide a much wider range of visual information. They transmit valuable ideas about the artist’s perception and representation of the territory they illustrate. The panorama shown on the maps represents the area along the travel routes that were used by several groups of people in mid-19th century Tibet – such as traders, pilgrims and officials. The maps present information about topographical characteristics such as mountains, rivers, lakes, flora, fauna and settlements. Furthermore a large amount of detailed information on infrastructure such as bridges, ferries, travel routes, roads and mountain passes is depicted. Illustrations of monasteries, forts and military garrisons – the three main seats of power in mid-19th century Tibet – are highlighted. Thus the drawings supply information not only about strategic details but also about spheres of influence. The question of what purpose the maps served remains a matter for speculation at present. William Edmund Hay was experienced in surveying and mapmaking – he travelled not only in the areas around Kulu, but also in Ladakh and in the Tibetan borderlands. He was also a collector with varied cultural interests. He never had the chance to travel to Central Tibet himself, but his interest in acquiring knowledge about Tibet were characterised by an encyclopaedic approach: he wanted to gather as wide a range of information on the area as possible. 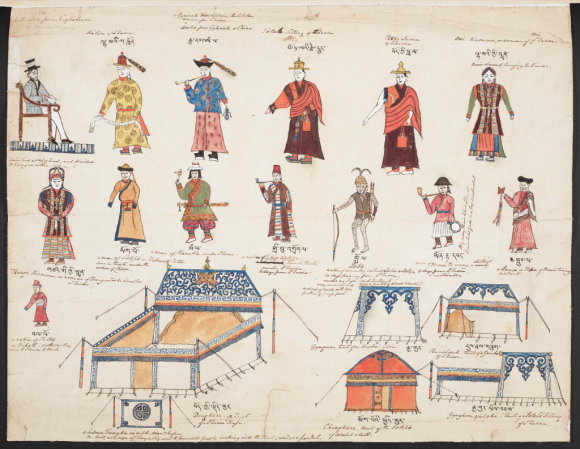 This drawing shows different people and a selection of different types of tents – supplemented by English and Tibetan captions (BL Add.Or.3033) 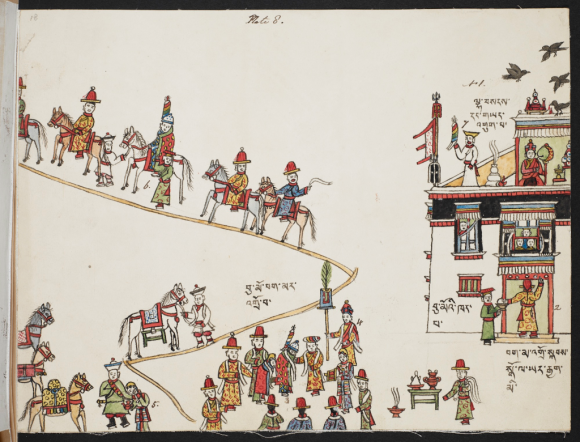 Illustration of a part of a wedding ceremony: the bride is picked up at her house. The whole ceremony is shown on several plates (BL Add.Or.3037)

What makes the Wise Collection so fascinating is the fact that it can be studied from different disciplines. On the one hand the picture maps can be assigned to Tibetan cartography and topography; on the other they represent an illustrated ‘ethnographic atlas’. Supplemented by the accompanying drawings and explanatory notes, the Wise Collection represents a ‘compendium of knowledge’ on Tibet.

When I started doing research on the Wise Collection I thought I knew where I was going. But the longer I studied the material and the deeper understanding I gained of the collection as a whole, the more new questions emerged. I realized that the drawings require a wider frame of analysis in their understanding. Thus I focused not just on the stories in the drawings but also on the story of the drawings. The expected results of my research will expand our knowledge about the connection between the production of knowledge and cultural interactions. As the result of a collaborative project of at least two people with different cultural backgrounds, the Wise Collection reflects a complex interpretation of Tibet commissioned by a Scotsman and created by a Buddhist monk. The result of their collaboration represents a ‘visible history’ of the exploration of Tibet. The entire Wise Collection and my research results will be published in my forthcoming large-format monograph.

The whole collection was restored and digitised in 2009 and is available on British Library Images Online (search by shelfmark). The drawings are catalogued as the ‘Wise Albums’ under the shelfmark Add.Or.3013-43. Originally all the drawings were bound in three large red half-leather albums. The related drawings and the relevant explanatory notes are still bound in these albums. The large picture maps have been removed and window-mounted for conservation reasons. The Lhasa map was on display in the exhibition Tibet's Secret Temple held at the Wellcome earlier this year and several of the drawings will also be exhibited in  Monumental Lhasa: Fortress, Palace, Temple, opening in September 2016 at the Rubin Museum of Art, New York.

The Tashilhunpo Monastery in Shigatse in Southern Tibet (Detail from BL Add.Or.3016,  f. 2) 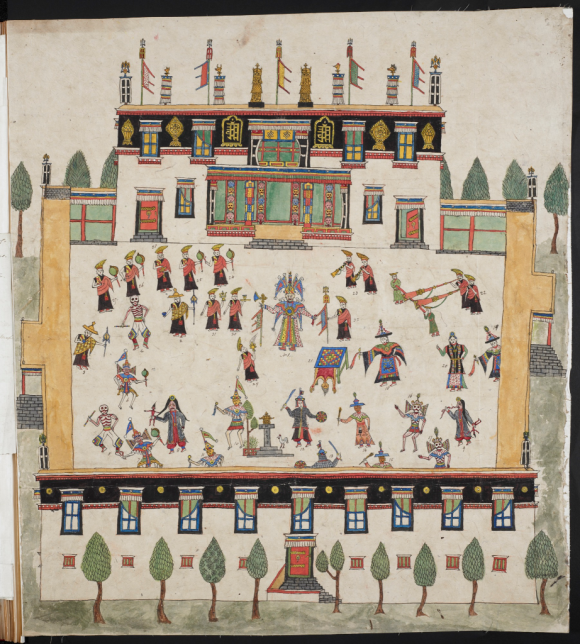 Illustration of a ceremony taken place in the courtyard of the Nechung Monastery in Lhasa, seat of the former Tibetan State Oracle (BL Add.Or.3043)

Diana Lange, Journey of Discovery: An Atlas of the Himalayas by a Nineteenth-Century Tibetan Monk. The British Library’s Wise Collection (working title of forthcoming publication).
––– “A Dundee’s Doctor’s Collection(s) on Tibet: Thomas Alexander Wise (1802–1889).” In: Charles Ramble and Ulrike Rösler (eds) Tibetan and Himalayan Healing. An Anthology for Anthony Aris. Kathmandu, 2015: 433–52.
–––“Visual representation of Ladakh and Zangskar in the British Library’s Wise Collection.” In: Robert Linrothe and Heinrich Pöll (eds) Visible Heritage: Essays on the Art and Architecture of Greater Ladakh. New Delhi, 2016: 131-68.
William Edmund Hay, “Report on the Valley of Spiti; and facts collected with a view to a Future Revenue Settlement,” Journal of the Asiatic Society of Bengal 19 (1850): 429–51.
Charles Horne, “Art. III.—On the Methods of Disposing of the Dead at Llassa, Thibet, etc.,” Journal of the Royal Asiatic Society of Great Britain & Ireland 6 (1873): 28–35.
William Howard Russell, My Diary in India, in the Year 1858-59, vol. 2. London, 1860.

Posted by Ursula Sims-Williams at 12:55 AM