In his previous blog, PhD student Paul Naylor introduced the BL’s collection of Arabic manuscripts from West Africa, on which he has been working. In part two of this blog series, and with the cataloguing of the collection almost complete, Paul looks at the collection in more depth, picking out some particularly interesting items.

Religious Works
Most of the material in the collection is of a religious nature, reflecting the strong link between literacy in the Arabic language and Islamic learning in 19th century West Africa. There are five complete copies of the Qur’an – the holy book of Islam – and many more incomplete sections. (In a forthcoming blog I will reflect on some unique features of the BL’s collection of illuminated Qur’an copies produced in West Africa.)

Other religious works include copies of biographies and praise poems of the Prophet Muhammad, many of which are recited on the occasion of the Prophet’s Birthday (Mawlud). There are also many devotional and mystical works from the Qadiri and Tijani Sufi orders, founded in 12th century Baghdad and 18th century Aïn Madhi (present-day Algeria) respectively and popular in West Africa.

The collection also features spiritual works from West African religious movements. In 1804, the teacher and social reformer Usman dan Fodio embarked on a military campaign resulting in what we know today as the Sokoto Caliphate, in the area of present-day northern Nigeria. Usman’s movement had a profound effect on West African society and for many Muslims he is a figure of immense spiritual importance. The British Library’s collection includes a fine copy of the 'Meadows of Paradise' (Rawḍ al-Jinān). This is a work of 'miracle literature' about Usman written by Gidado dan Layma, one of his closest associates, and compiled sometime in the 1840s. Its presence in this material, which is almost certainly from a region beyond the Sokoto Caliphate, is testament to the extent of Usman’s influence throughout the West African region. A page from this work is shown below. 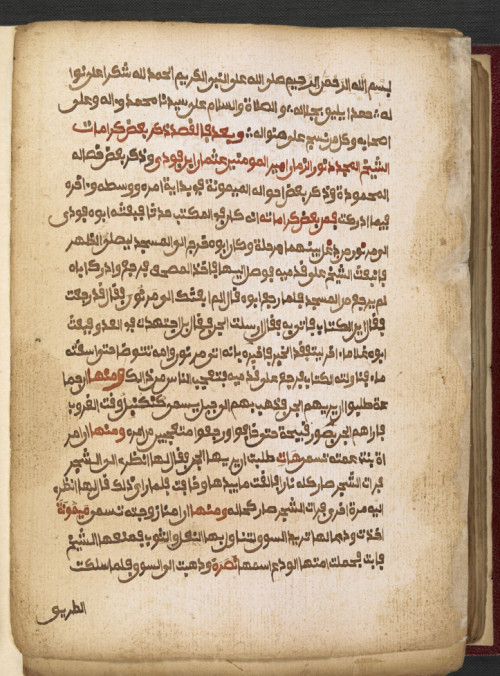 Educational Works
For the British Library’s recent ‘West Africa: Word, Symbol, Song’ exhibition, we showcased items from the collection demonstrating the breadth of the Islamic ‘core curriculum’  still being taught to students in centres of Islamic learning across the West African region (Hall & Stewart 2011: 109-74). These works include canons of Maliki law (the branch of Sunni Islam followed in West Africa) and texts on Islamic beliefs and  practices, as well as classical works on Arabic grammar and syntax such as the Ājurrūmiyya. 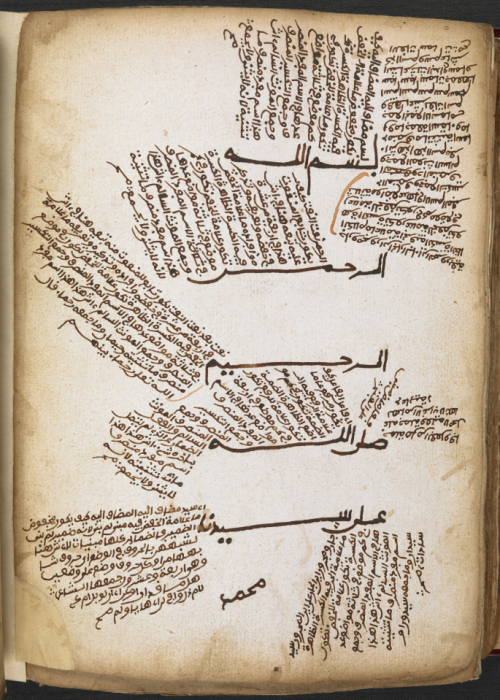 There are also many works authored by West African scholars on subjects such as the preparation of halal meat and the eating of kola nut, as well as obituaries for local scholars who passed away. This page is from an obituary for one such scholar, al-Haj Salim al-Zaghawi al-Kasami, from a town called Touba, a common name for settlements of Muslim scholars in the Senegambian region. This personage is listed as the owner of several manuscripts in the collection, some of which may be written in his hand or the hand of his students. The author laments, ‘Knowledge has left Touba and Futa. The time of grammar, inflectional endings (iʿrāb) and conjugation is over’ and compares the death of this scholar to a disaster rivalling the Biblical flood. 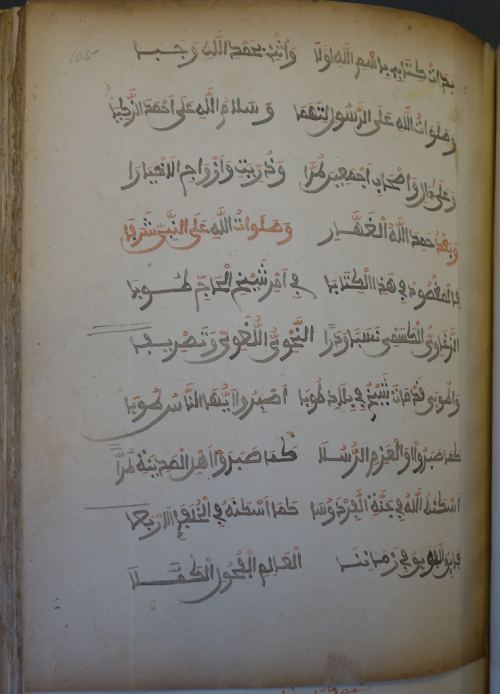 Fawāʾid
Most of the remaining material comes under the category of ‘Fawāʾid’. This term is an Arabic word meaning ‘benefits’ and constitutes a practice or ritual said to result in a supernatural effect. This practice could be something as simple as reciting a Muslim prayer or section of the Qur’an on a certain day, at a certain time or in a certain place. Other documents explain how to manufacture talismans (Ar. aḥrāz). In an Islamic context, a talisman is usually a small piece of paper with a passage of Arabic writing on it. Depending on the intended effect, the paper could be worn about the person as a protective amulet (Ar. khātim), buried in a special place or, most commonly, written out in ink on a slate and then washed off with water, milk or plant extracts. This mixture is either drunk or applied to the body. The image below shows a religious scholar writing an amulet for a widow. 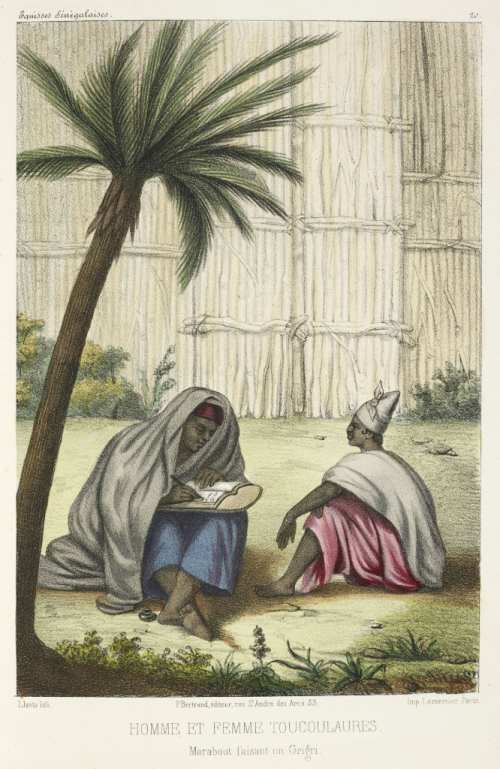 Many fawāʾid are accompanied by number squares (Ar. awfāq) in which each row and column add up to the same number, not unlike a Sudoku. The squares, which are common throughout the Islamic world, are said to have come to the Middle East from China. They originally consisted of 3 lines of 3 small squares, before being enlarged and made more complex by medieval Arab mathematicians (Camman 1969). Later they were combined with the science of numerology, in which each letter of the Arabic alphabet is assigned a numerical value, so that the squares could also be used to express words. When filled with a name of God or a Prophet - in letters or in their numerical value - the square was thought to have very powerful spiritual properties. When filled in with a personal name, the square could be used to tell one’s fortune or to protect (or alternatively curse) that person. The earliest Europeans to visit West Africa in the 18th and 19th centuries commented on the ubiquitous nature of these devices, which were used by Muslim and non-Muslim alike and made by specialists called mallams (Ar. muʿallim, a learned person). 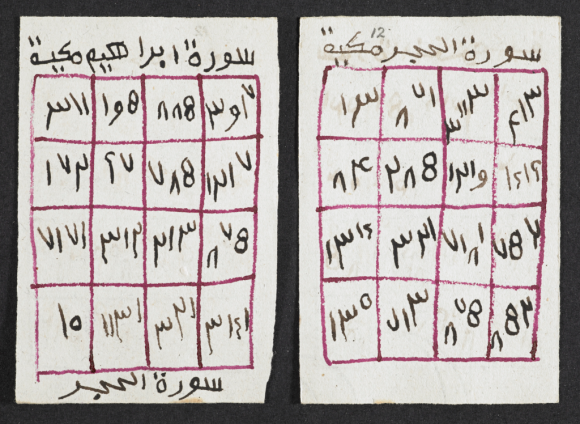 In the past, this material was deemed to be of little interest to scholars. However, in more recent times, the value of these documents is being recognised (Brenner 1985; Epelboin 2016).  As well as being a fascinating record of West African trees and plants used in such preparations, what we must remember is that each talisman was made at the request of a ‘patient’ for a specific malady or problem.

Thus, these documents are perhaps the most personal of the collection. They reflect preoccupations we can all relate to: the relief of back pain, a guarantee of a happy marriage, the conception of a child, an aide for students to memorise their lessons, or even a husband’s appeal for his wife to come back to him. There are also many ‘love amulets’ with space left for the name of a man and a woman. A detailed study of these talismans will undoubtedly tell us much about the social history of the societies that produced them. The image below is a page from a fāʾida (singular of fawāʾid) to make all who see the bearer love them, ‘as a Muslim loves paradise, as a faithful person loves prayer, as a stomach loves food, as fields love the rain, as infidels and wolves love unclean meat’. 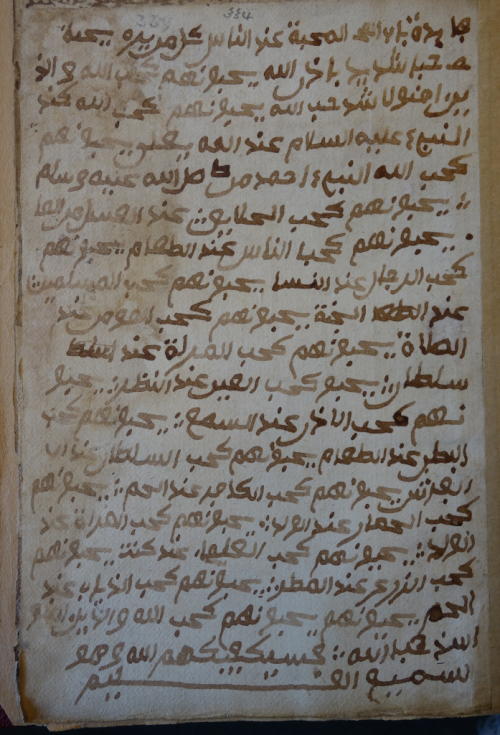 In the next few months, detailed descriptions of every one of the Arabic manuscripts from West Africa held in the BL’s collection will be uploaded onto the British Library’s online catalogue of manuscripts. This will make it easy for readers to know what is in the collection and facilitate access and study.