Regular visitors to the Treasures Gallery of the British Library will know that the wall case displaying Indian book arts has recently had a change of display. On exhibition are eight folios from the Dara Shikoh Album (Add.Or.3129), one of the great treasures of the Asian and African department, which are discussed in this blog. The album is known to have been compiled by Dara Shikoh (1615–59), the eldest son and heir of the Mughal Emperor Shah Jahan, from the inscription in the prince’s hand on folio 2 dated 1056/1646–47. The inscription records the gift of the album to his wife Nadira Banu Begam, his cousin and the daughter of Sultan Parviz, whom he had married in 1633. 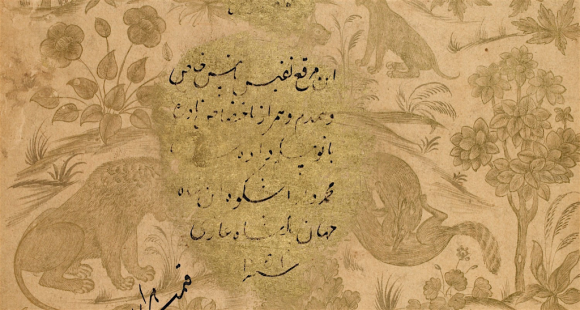 The previously accepted date of the inscription 1051/1641-2 has been revised by John Seyller, who has suggested a date of 1056/1646-7 on the basis of enhanced digital imagery (click here to see enhanced photo), and this revised date is accepted here. For a list of the contents of the album see Falk and Archer (Indian Miniatures, no. 68) who date it 1633–42 and Catalogue of India Office Select Materials. Only two dates are inscribed which can definitely be assigned to the period before Dara Shikoh's death, one on a painting by Muhammad Khan dated 1043/1633-34, the other in the previously mentioned dedicatory inscription.

After the fratricidal war precipitated by Shah Jahan’s illness in 1657, Dara Shikoh was executed by the victorious Aurangzeb in 1659, a few months after his wife had died while attempting to flee with her husband to Iran. The album came into the possession of Aurangzeb and attempts were made to blot out the memory of ‘the apostate’, as his rigidly orthodox brother regarded him. The inscription was obliterated with gold paint which has since worn away, allowing Dara Shikoh’s writing to reappear. After Dara’s death, the album was handed over to Pariwash, librarian to the Nawab ‘Aliyyah, on 21 Rajab, regnal year 3 (of Aurangzeb, i.e. 1661), according to the inscription on folio 1r. The title Nawab ‘Aliyyah, previously borne by Mumtaz Mahal herself, was awarded after the death of her mother to Shah Jahan’s eldest daughter and favourite Jahanara (1614-80), who became the Nawab ‘Aliyyah Padshah Begum Sahibah (Inayat Khan, Shah Jahan Nama, p. 3), as discussed in my forthcoming paper (Losty, ‘Dating the Dara Shikoh Album’).

The seventy-four folios with sixty-eight paintings interspersed with calligraphy and the gilt tooled leather covers represent the album almost in its entirety.  Five leaves are missing according to an early foliation, which may have included Dara Shikoh’s own calligraphy or other pages with inscriptions relating to him.

In the book accompanying the British Library’s 2012 exhibition Mughal India: Art, Culture and Empire, the present writer argued that the contents of the album, containing portraits of teenage princes and princesses, would most naturally fit into the time frame 1631-33 when Dara Shikoh was 16-18, between his engagement to his cousin, the postponement of the marriage owing to the death of his mother Mumtaz Mahal in 1631, and the eventual celebration of the nuptials in 1633 (Losty and Roy, Mughal India, pp. 124-37).  There is no need to argue, as almost all previous writers have done, that the contents of the album must be dated between the two inscribed dates of 1633 and 1642 (now 1647).

The paintings are arranged in facing pairs, as was normal in Mughal albums. The contents mostly consist of portraits of the aformentioned teenage princes and princesses, of holy men of various sorts, and studies of flowers and of birds. Ths inner album borders normally match, except where a folio is missing, and the outer borders all bear floral designs in gold. The paintings are all fairly simple and have sometimes been criticised for not matching the quality of the albums associated with the emperors Jahangir and Shah Jahan, but then as a princely album it would have been inappropiate to do so, any more than do the Salim and Khurram albums, compiled by the future emperors when princes. 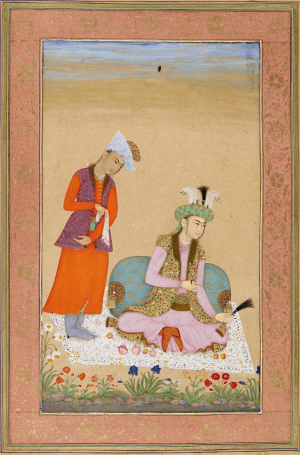 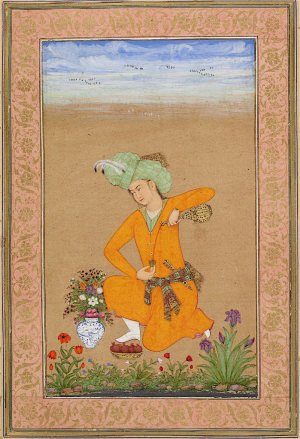 The otherwise uknown artist Muhammad Khan signed and dated one painting in the album of a prince dressed in Persian costume and its facing pair of a similarly dressed prince with an attendant can safely be attributed to the same hand. They are linked by similar backgrounds and by a frieze of exquisitely detailed flowers across the bottoms of the paintings. Despite their Persianate appearance, these paintings are not Persian, but nothing is known of Muhammad Khan’s origin or his other work. He is possibly a Deccani artist employed by the prince 1630-32 when the court was in Burhanpur and who returned to Agra with him. Some of the flower studies in the album can also be attributed to his hand. 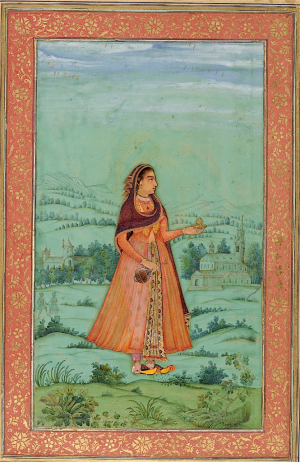 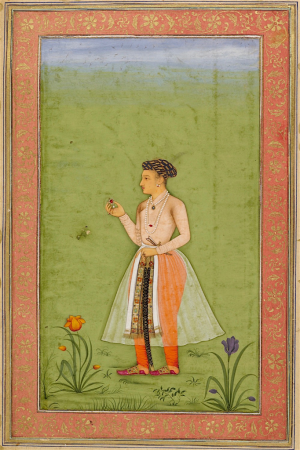 It was argued in the 2012 book that most of the princely portraits in the album were in fact of the young Dara Shikoh between the ages of 15 and 18 and also that while the court was in Burhanpur the prince had access to his father’s artists. Certainly Chitarman was in Shah Jahan’s employ in 1628 (his portrait is in the Kevorkian Album in the Metropolitan Museum, New York) before becoming associated with Dara Shikoh throughout the 1630s. These two portraits obviously form a pair and the young prince is holding up a sumptous jewelled pendant, a heart-shaped ruby or spinel surrounded by pearls and with a large pendant pearl, for presentation to the lady opposite. She is unknown of course, but was important enough to be painted in the latest style that is associated with the artist Bichitr around 1630, with its receding European landscape in grisaille as a backdrop, as in Bichitr's portrait of Asaf Khan from 1631 in the V&A. 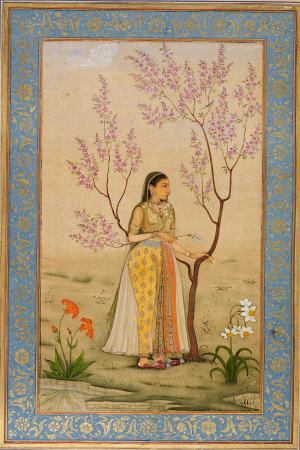 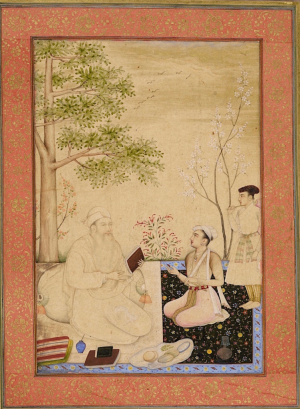 This pair of paintings, although now facing each other, cannot have been originally intended to do so since the inner borders do not match, although there is no break in the early foliation. The young prince seems to be about 12 from his size although somewhat older judging by his features. He holds out his hand to his tutor who seems to be about to hand him the book. The lightly painted drawing is typical of Chitarman’s work for the prince. The lady opposite, somewhat more mature than the majority of the female portraits in the album, wears jewels of imperial quality and stands with one hand on a prunus tree and the other holding a narcissus. That and the white narcissus growing before her, white being associated with mourning, suggest that this could be Dara Shikoh’s mother Mumtaz Mahal (b. 1593), who died in Burhanpur in 1631 giving birth to her 14th child. The unrelated borders suggest a possible intervention by the prince, who rearranged the order of the folios in order for his mother to cast her benevolent gaze over his studies. The handling of her head and the prunus in the background suggest that this could be the work of Bishndas.

The Album is also famous for its exquisite studies of birds and flowers, and one of each category was selected for display, illustrated here within their original album mounts decorated with gold flowers. 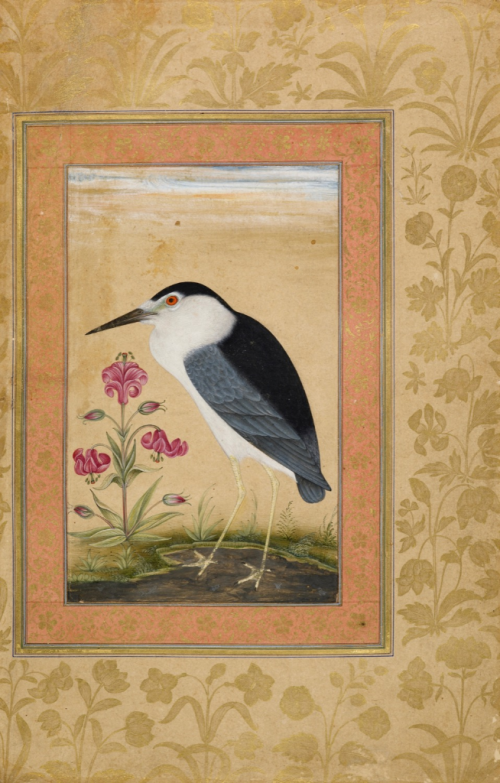 The black-crowned night heron (Nycticorax nycticorax) is a medium-sized found throughout many parts of the world including South and South-east Asia. Such herons have a black crown and back, with the remainder of the body white or grey, their eyes are red, and legs yellow. Being relatively stocky, with shorter bills, legs, and necks than other heron species, they do not fit the typical body form of the heron family. Their resting posture is normally somewhat hunched, but when hunting they extend their necks and look more like other wading birds. These birds stand still at the water's edge and wait to ambush prey lurking in the water, mainly at night or early morning. All these characteristics are evident in our portrait of such a bird, hunched and stocky, its feet in the shallow water of a jhil.

Jahangir’s passion for natural history was not inherited by his son Shah Jahan and grandson Dara Shikoh. It was during the 1630s that flowers and floral arrangements with their decorative possibilities came to dominate Mughal textiles and the adornment of architecture and album pages. Hence the addition of an egregious lily has transformed the painting from a natural history study into a decorative album page. 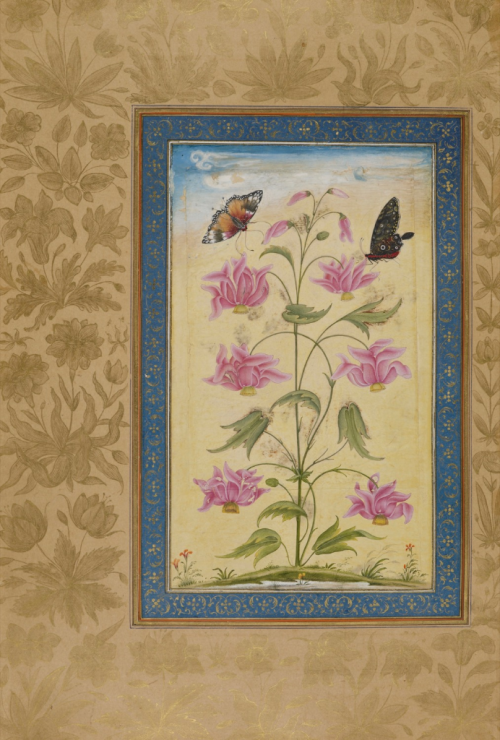 The album contains several studies of flowers that could pass muster as natural history paintings, albeit derived ultimately from European herbals (see my earlier post Mughal flower studies and their European inspiration), but many more are in a more decorative vein as here. This exotic plant with its double flowers, protuberant stigma and folded over toothed leaves could be intended for a lily or a hibiscus, but the intention of the painting is decorative, not naturalistic. The flowers are regularly spaced radially in the Chinese manner throughout the field and are linked by spiralling stems in the arabesque patterns that are also seen in the tulips at the base of Muhammad Khan’s painting of a prince above, as well as elsewhere in the album. Such floral patterns, still less the paintings of different flowers all springing from a single stem (e.g. Losty and Roy, Mughal India, fig. 86), did not make it into Shahjahani decoration in general and are possibly examples of artists’ early experimenting with such ideas before settling on the more familiar sprays seen in album borders and pietra dura work.  These ideas will be explored in a forthcoming paper.