Rivals past and present: Global powers converge on the Gulf of Aden

While media attention has focussed on the thousands of refugees crossing the Mediterranean Sea to reach Europe, a similar crisis has been taking place in the Gulf of Aden. Almost 90,000 Yemeni refugees have crossed the Gulf to the Horn of Africa in the past eighteen months, after a Saudi-led coalition of Arab air forces began strikes against rebel forces in Yemen, Saudi Arabia’s neighbour to the south. British-made cruise missiles and French-built Leclerc tanks have been deployed in the war effort, continuing a long history of involvement in the region for both countries.

A British political memorandum of 1897 (IOR/L/PS/18/B110), from the Political & Secret series of the India Office Records, documents British and French rivalry for influence over this part of the world over one hundred years ago. 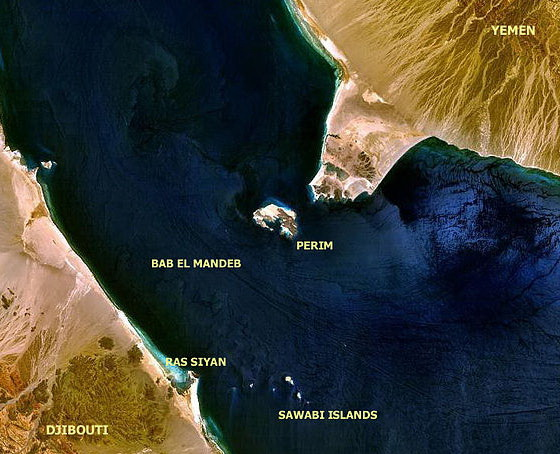 A satellite image showing the Bab el Mandeb Strait, which separates the Gulf of Aden from the Red Sea. Source: NASA, through Wikimedia Commons

The Gulf of Aden first acquired global strategic significance in 1869, when the newly-opened Suez Canal created a fast shipping route that ran through the Gulf and connected Europe with the East. In anticipation of the Gulf’s new role, the European Powers took up strategic positions close to its narrowest point at the Bab el Mandeb Strait: in 1857 Great Britain occupied Perim Island, near the Arabian coast of the strait, and shortly afterwards France and Italy claimed territory on the African coast nearby.

In 1868 the French also acquired land from a local ruler on the Arabian side of the strait at Sheikh Said, a promontory lying immediately behind Perim Island. The purchase was repudiated a year later by the Ottoman Government, who considered that the territory was theirs, but the matter was taken up again in 1893 when a French politician urged his government ‘to press their never abandoned claim to this position’.

The renewed French interest in the place prompted Lieutenant-Colonel Edward Vincent Stace, First Assistant to the Resident at Aden, to visit Sheikh Said later that year, and his report and sketch map are reproduced in the memorandum along with a summary history of subsequent events. 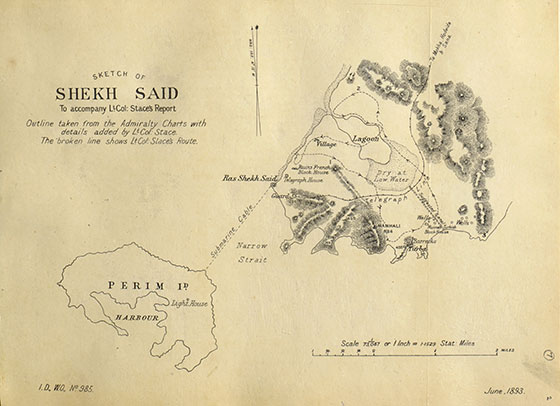 Stace investigated a rumour that the French planned to dredge the lagoon that lay behind the tip of the promontory and dig a canal from there to the opposite side: ‘Thus a basin would be formed in which vessels of war could lie, having two entrances, one from the Red Sea and the other from the Gulf of Aden’. Stace confirmed that the works had not begun, but warned that, if completed, they would create ‘a very formidable position’. 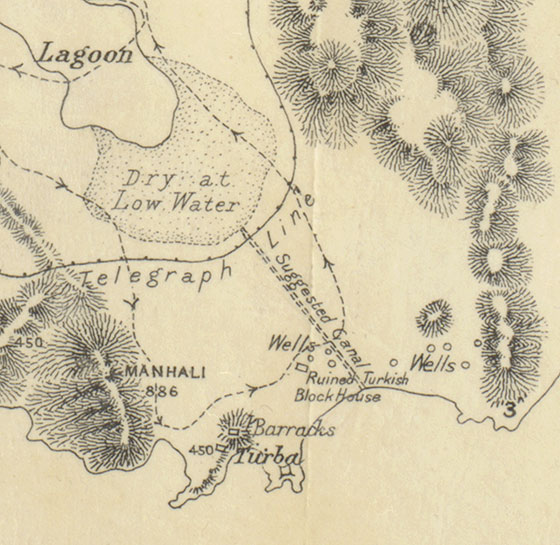 The matter was taken seriously at the highest levels. Both the Secretary of State for India and the Director of Military Intelligence agreed that the French should be warned off, expressing concern for the security of coaling facilities on Perim Island, and fearing that once established, the French might supply ‘modern arms to the rebellious Arab tribes’, destabilising the region and gaining influence close to the British port and coaling station at Aden.

The British solution lay in confidentially alerting the Ottoman Government to this threat, and assurances were soon received that the French would not be allowed to take over any part of the Arabian coast.

However, the French continued to assert the ‘rights of France’, and refused to give formal recognition that Sheikh Said formed part of the Ottoman Empire. In 1885 they made an abortive attempt to land a gunboat on the promontory, and in 1897 they sought clarification on their side whether or not Sheikh Said, ‘the veritable Gibraltar of the Red Sea’, was occupied by the British – a rumour that Her Majesty’s Government was happy to deny, as it was to Britain’s advantage that the promontory remained in Ottoman hands.

Before closing, the memorandum reveals a new concern that Russia too might seek a foothold in the region, after a Russian gunboat was spotted on the African shores of the Red Sea, and the document ends with the suggestion to watch further movements there by both France and Russia.

Today around eight percent of global trade passes through the Bab el Mandeb Strait on its way to or from the Suez Canal, and the major powers continue to have a strong presence in the region. France maintains a large military base in Djibouti, on the African coast of the strait, in the company of the United States, Japan, and soon China, and Russia too has recently negotiated rights to deploy its navy there. After the recent outbreak of war in Yemen, Houthi rebels captured Sheikh Said and Perim Island, from where they commanded the Bab el Mandeb Strait with missiles and long-range cannon, but they were ousted by the British, French and US-backed Arab coalition six months later .

Posted by Annabel Gallop at 9:05 AM