In the digital era, accessing information of any kind from a library is just one click away on your computer keyboard, and almost makes you forget how difficult this activity could be in the past.  Half a century ago, this luxury was unimaginable, thanks not only to the state of technology at that time but also to the scarcity of source materials. The problem became even more acute when you were dealing with materials from a country which had gone through difficult circumstances, such as Vietnam in the 1960s.  In this two-part blog, I will discuss the great lengths to which the British Library went in order to acquire publications from this war-torn and politically-divided country, based on archives held in the department.

The drive to acquire materials from Vietnam was mainly due to G.H. Spinney, who from 1948 was Keeper of the State Paper Room (which subsequently became the Department of Official Publications in the British Library). During the early 1960s Spinney campaigned vigorously to increase the collection of official publications in the State Paper Room, largely by utilising the mechanism of international exchange (Harris 1998: 598, 654). 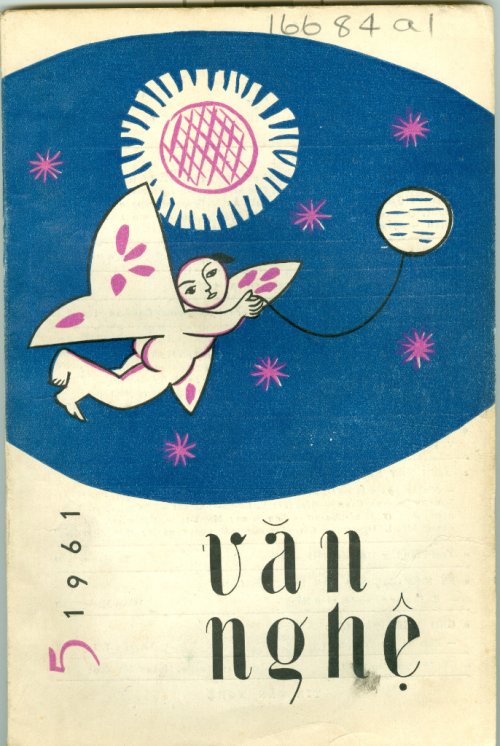 The Vietnamese collection was originally held in the British Museum’s Department of Oriental Printed Books and Manuscripts. Unlike the large numbers of publications in Burmese and Malay from former British colonies in Southeast Asia, up to the 1950s the Vietnamese collection was very small. The Cold War and scarcity of information from remote communist-bloc countries compounded the difficulties in acquiring materials in both vernacular languages and English, and on 13 December 1960, H.A. Arnold from the State Paper Room wrote to Kubon & Sagner, a book supplier in Munich, Germany to see whether it would be able to supply materials from Mongolia, U.S.S.R., North Korea and North Vietnam for the Library. 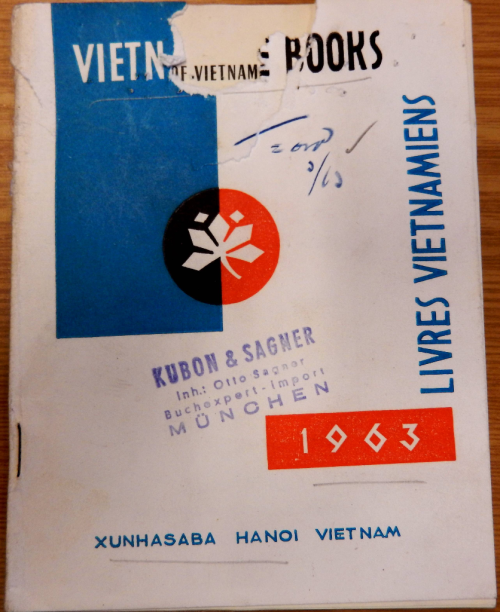 1963 catalogue from XUNHASABA, the state-owned book supplier in North Vietnam, received via Kubon & Sagner, a supplier in Germany.

For sourcing materials from North Vietnam, the British Museum enlisted the help of Hanoi’s main ally, China, to find ways to contact relevant institutions. The National Library of China in Beijing eventually provided Spinney with contact details for North Vietnam and in May 1959, he wrote a long letter to the Director of the National Library in Hanoi to ascertain whether the latter would be interested in establishing book exchanges with the British Library. Parts of Spinney’s letter are worth quoting here:
“… During a general review of our accessions from Asiatic countries, we were disturbed to find that we have so far received no official publications from the Government of the Democratic Republic of Vietnam … and we need therefore urgently to acquire documentation from official sources in the Democratic Republic of Vietnam to provide a basis for research …. You will readily appreciate that in acquiring such documentary material we have to think in terms of the requirements of posterity as well as of current research …” (G.H. Spinney to the Director of the National Central Library, Hanoi, 4 May, 1959)
There is little evidence that Spinney’s request was well received by Hanoi, and further approaches were made in 1962 and 1963, as shown by copies of letters held in the archives from H.A. Arnold to the Cultural Attaché of the Embassy of the Democratic Republic of Viet Nam in Moscow (dated 2 August 1961, 27 August 1962 and 15 July 1963).

Despite these setbacks the Library persevered in its attempts to build up the national collection in Vietnamese. In the 1960s, this task was split between two departments: the State Paper Room was in charge of acquiring official publications from Hanoi, while the Department of Oriental Printed Books and Manuscripts collected printed books on social sciences and humanities. They used book dealers in (West) Germany and Hong Kong, and occasionally bought directly from Xunhasaba, the North Vietnam state-owned book dealer. Requests were sometimes rejected by Hanoi, especially for official publications, with the reason being given that “the item is not for export”, a message which indicates the level of secrecy and control of information in this country. However, sporadic donations of materials were also received from North Vietnam’s diplomatic mission in New Delhi. 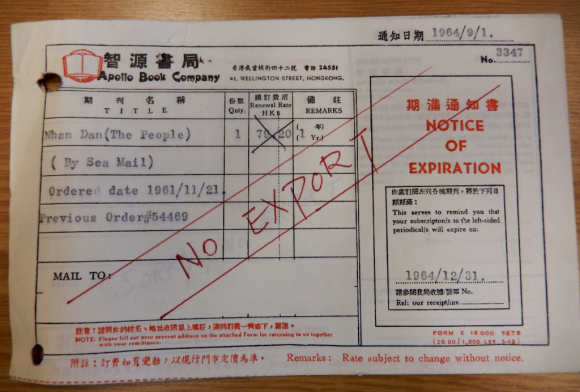 “No Export” notification on an item ordered from North Vietnam.

Deliveries of books during the war years were never easy, and sometimes despatches from London to Hanoi or vice versa did not arrive at their destination. Correspondence between Ngyuễn Minh Tăn, the Vice Director of the Central Library of Science and Technology in Hanoi, and H.A. Arnold, the Keeper of the State Paper Room, illustrates vividly the problems experienced by the libraries in London and Hanoi. On 10 March 1973 Ngyuễn Minh Tăn wrote to Arnold:
“… We are happy to advise you that despite of the savage bombing of Hanoi by the US, our Library as well as the Library for Social Science and the National Library are very safe. We were evacuated for some time but we are now back in Hanoi, and working normally … We are currently experiencing some difficulties and cannot acquire some of your requested periodicals …”
To which Arnold replied on 24 May 1973:
“… It was good to hear from your Library again - Mr Tran Mai’s last letter to me …. was dated October 10th, 1971 – and I was very pleased to learn that not only was your own Library safe from the bombing, but also the Library for Social Science and the Bibliotheque Nationale as well … I can well appreciate that you are having many difficulties at the present time and that you are not in a position to send me some of the journals I have requested in the past. I am sure, however, that as conditions improve, … you will send me whatever you can find…”
[“The savage bombing” referred to in the above correspondence was the Operation Linebacker or the Christmas Bombing (18-29 December 1972) in which the US launched serious bombings over Hanoi to force the latter to negotiate a peace deal and eventually the Paris Agreement was signed on 27 January 1973.] 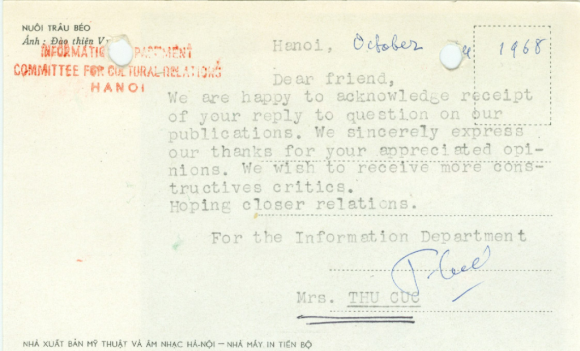 Postcard to the Library of the British Museum from the Committee for Cultural Relations with Foreign Countries, Hanoi, October 1968. 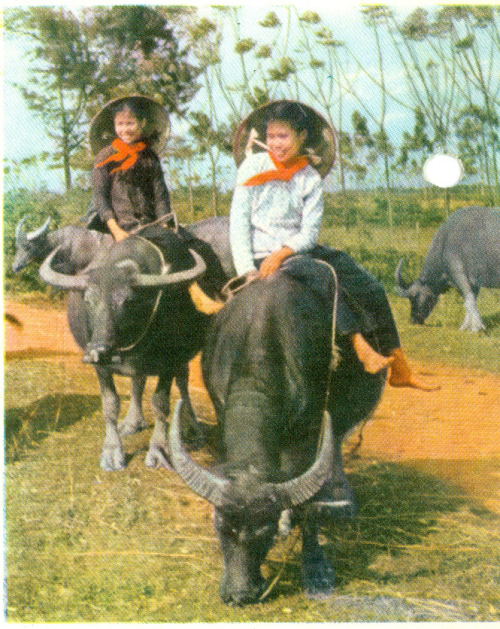 Picture on the front of the postcard of 1968 shown above.

Despite all the difficulties during the Vietnam War, Vietnamese material from North Vietnam continued to arrive in London through various channels. When in 1973 the British Library was formed from the Library of the British Museum, the Vietnamese collection in the re-named Department of Oriental Manuscripts and Printed Books consisted of 3 manuscripts and about 800 printed books and some titles of periodicals (Goodacre and Pritchard 1977: 61).

No evidence of formal contracts for book exchanges with any institutions in North Vietnam have been found in our archives but we can deduce from various correspondence that the Library had exchange programmes with at least three libraries in Hanoi in order to acquire official Vietnamese publications on the economy, science and social sciences. It is interesting to note that the number of printed material, both official publications and monographs, which the British Library received from North Vietnam from 1973 underwent a noticeable increase. This might be related to the signing of the Paris agreement in January 1973 which eased tensions and hence allowed almost normal daily activities to resume. At the same time, the British Library still continued to acquire printed books from Vietnam on humanities, art and culture via book dealers in Germany and Hong Kong.

In the second part of this blog post, I will look at publications from South Vietnam.

Posted by Annabel Gallop at 8:51 AM