The Hebrew Manuscripts Digitisation Project has been digitising the British Library’s Hebrew manuscript collection since 2013. The Library’s collection is one of the most important in the world, and this project has enabled us to make the manuscripts freely available to view online, transforming access for scholars and the public worldwide.

Funded by The Polonsky Foundation, we have now completed Phase 1 of the project, with 1,300 manuscripts available to search and view online. The digitised collection includes medieval and early modern codices, single sheets, charters and scrolls, as well as an oak board (Or 6302). The oldest item we have digitised is Or 4445, the London Codex, a copy of the Pentateuch from 920-950.

This phase has taken 3 years, 435,307 image captures and 37TB of storage space, an incredible achievement by a dedicated team of conservators (including a specialist textile conservator), photographers, cataloguers and quality control officers, with expert support from Lead Curator Ilana Tahan, and enriching digital scholarship including the creation of our website and 3D models. See this video for an overview of the project and the different stages of the digitisation process. 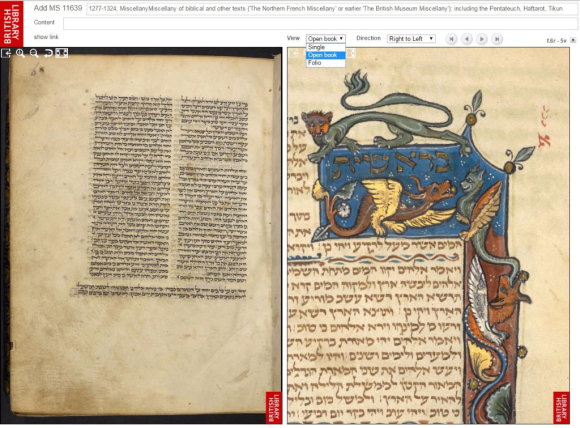 Digital access to manuscripts not only saves much time and effort spent travelling to the Library, but also makes the content much more visible. We have already seen how this has increased access, research, and opportunities for innovation using the Hebrew collection. It has also enabled us to reveal illegible and hidden text and images. For some of the more over-sized items, such as the scrolls, digitisation provides a unique opportunity to view them opened out fully, which would be impossible with the physical manuscript due to their size and fragility. As more institutions begin to digitise their collections and publish them online, manuscripts from the British Library’s Hebrew collection can now be compared with manuscripts from the collections of other institutions, from all over the world.

I’d now like to share with you three of my personal highlights from the Hebrew collection, now all available to view online. 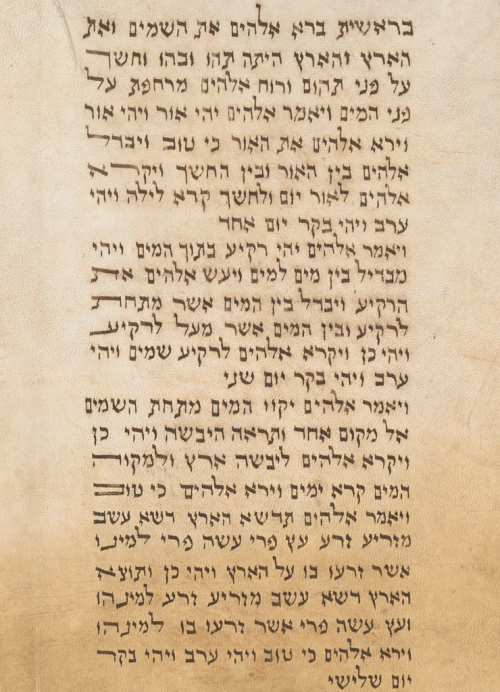 This is a Torah scroll from the Chinese Jewish community in Kaifeng (Add MS 19250), one of the seven ancient capitals of China. This scroll may have been made between 1643–1663. It is 42 metres long, which is very long for a Torah scroll, but not as long as the collection’s longest scroll, which is over 52 metres long. The Kaifeng scroll is made of 94 strips of soft sheepskin, sewn together with silk thread (usually Torah scrolls are sewn together with animal sinew). As well as being incredibly rare and beautiful, this silk-route scroll tells a really interesting story about a remote Jewish community.

There is evidence of Jews in Kaifeng from as early as the first century CE. The community’s everyday activities incorporated customs unusual for China (such as abstinence from pork), as well as traditional Chinese practice (such as binding of feet). Jesuit missionaries came across the Jewish community in Kaifeng in the 1600s, and were particularly intrigued by their Torah scrolls, as they hoped that due to the community's isolation from the rest of the Jewish world, their scripture would be ‘uncorrupted originals’ of the Old Testament, shedding new light on Christian interpretations. In the 1800s, in response to the growing interest in their Torah scrolls, the Kaifeng community obliged collectors by selling them several copies. The contents of these Torah scrolls turned out to be identical to that of conventional scripture. This scroll was bought by missionaries in 1851, and presented to the British Museum in 1852.

The full scroll can be viewed on the Digitised Manuscripts website here. 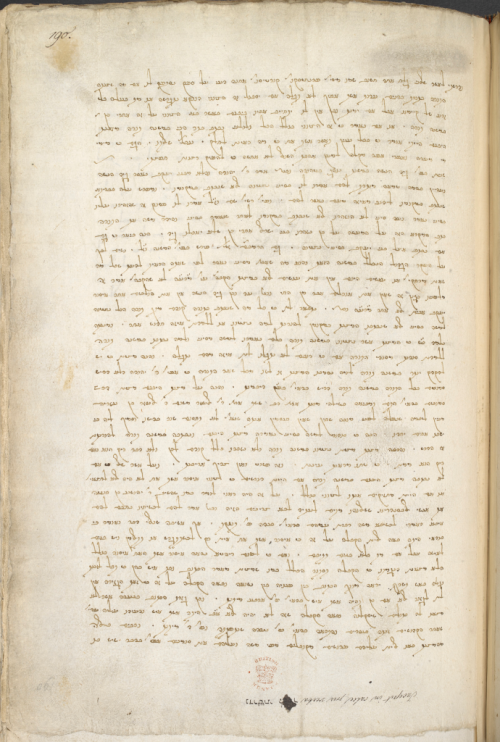 At first glance the Hebrew manuscript shown above (Arundel MS 151) may not look like much, but it demonstrates a less well-known but fascinating aspect of one of the most famous events in English history – the divorce of King Henry VIII and Catherine of Aragon in 1533. This manuscript is bound in a volume called 'Letters and Papers relative to the divorce of Henry VIII', which also includes correspondence from Cardinal Wolsey, Stephen Gardiner, and the King himself. So where does Hebrew come into it?

Catherine of Aragon married Henry VIII in 1509, after his brother Arthur had died. The Jewish law of levirate marriage was one of the ways that this strategically advantageous marriage was justified (Deuteronomy 25:5-6). Years later, Jewish law was also used to try and justify their divorce. The king had teams of scholars study Jewish law, and thought that there might be a loophole due to a prohibition against marrying a sister-in-law (Leviticus 18:16, 20:21). This ‘sin’ is punished by childlessness, which Henry may have felt was reflected in his own situation (with only a daughter).

The king sent a delegation to Italy to discuss this loophole with learned Jews (Jews had been expelled from England in 1290). This letter is the reply of Jacob Rafael of Modena, who did not give the answer the king was looking for. He stated that the law of levirate marriage overrode the prohibition in Leviticus, and therefore Henry VIII’s marriage to Catherine of Aragon was valid and could not be annulled on those grounds.

The full letter (folios 190r-191v) can be viewed on the Digitised Manuscripts website here. 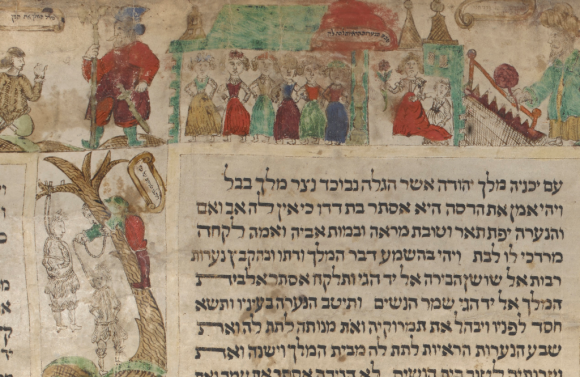 This beautiful illuminated scroll of the Book of Esther is from Germany from the 17th century (Or 1047). It is just under 4 metres long. This scroll needed a lot of conservation work before it could be digitised, as at some point in its history, it had been backed onto material when damp. This had caused a lot of crinkling and contractions as it dried, risking flaking the illuminations and tearing the scroll. The conservation process was incredibly painstaking, involving very carefully removing the backing as slowly and carefully as possible.

This scroll is illustrated with the story of Esther, read by Jewish people during the festival of Purim. The illuminations show the whole story, from the beauty contest for the new queen at the beginning, the political machinations of the main characters, to the violent and bloody ending. It includes some of the exegetical interpretations of the story within the illuminations and the text: the hidden presence of god in the story is emphasised with god’s name highlighted in the lettering. It also includes contemporary images of people enjoying the revelry typically associated with the festival of Purim, a graphic circumcision scene, a Venetian galleon, two elephants and a rhinoceros. 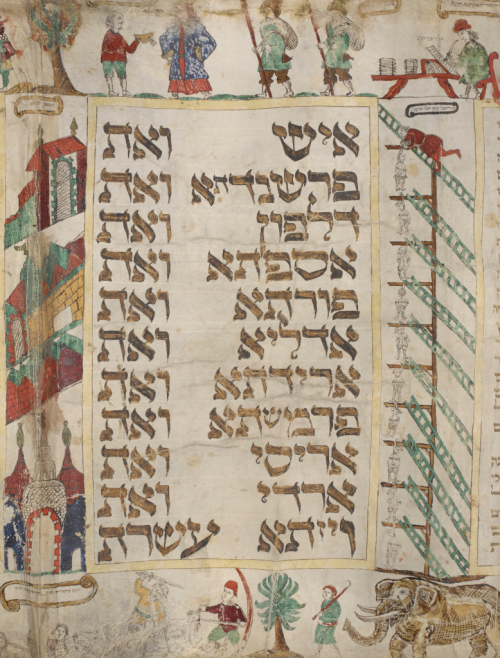 The full manuscript can be viewed on the Digitised Manuscripts website here.

Posted by Annabel Gallop at 6:39 AM