This blog is the second in a two-part series chronicling the efforts by the British Library to build up its Vietnamese collection, particularly throughout the difficult period of the Vietnam War years, based on departmental archives. Part 1 dealt with North Vietnam; in Part 2 we look at South Vietnam.

Unlike the situation with North Vietnam, throughout the war years the British government maintained a diplomatic relationship with the South Vietnamese regime in Saigon, and there was a Republic of Vietnam embassy located in London. The earliest evidence of an attempt by the then Library of the British Museum to establish book exchanges with South Vietnam is found in a letter from G.H. Spinney (the Keeper of the State Paper Room) to the Vietnamese Embassy in London, dated 7 May 1959. In it, he mentioned his lack of success in contacting the State Library of Vietnam in December 1958 regarding establishing a book exchange programme, and also reiterated the necessity of collecting material from South Vietnam.

Through the London Embassy of the Republic of Vietnam and the Ministry of Foreign Affairs in Saigon, an agreement in principle was reached on 12 January 1960. Despite the absence of a formal exchange contract, from 1959 onwards the British Museum Library started to exchange both official publications and books with various South Vietnamese government ministries and departments.  Negotiations between two parties regarding the details of exchanges went on for some years, dealing with details such as whether or not the supply of back numbers of periodicals of any date could be arranged and included (source: letter from Miss E.C. Blayney, The Foreign Office to Mr. J.R. MacKay, H.M. Stationery Office, 17 July 1962). 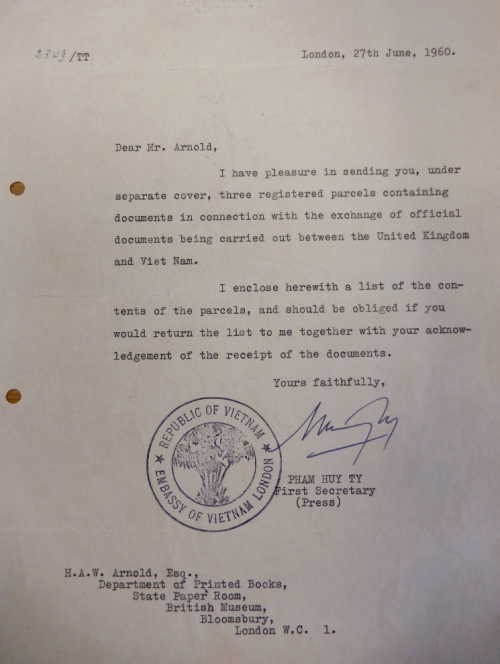 Finally, on 30 November 1962, the UK government and the government of the Republic of Vietnam agreed upon an Exchange of Notes concerning the exchange of official publications between the two governments. This agreement formed the basis for material collected from South Vietnam during the war years. The Directorate of National Archives and Libraries in Saigon was entrusted with the task of sending official publications from the Republic of Vietnam to the British Library.

Exchange of Notes between the UK government and the government of the Republic of Vietnam, 1962.

The correspondence between the British Library and the Vietnamese Embassy in London demonstrates that there was a regular exchange between the two institutions, and Saigon occasionally also sent a few monographs to the Library. However, it is quite surprising  that the number of official serials and monographs from Saigon in our collection during the war period is much smaller than that received from Hanoi, considering the fact that the UK only had diplomatic relations with the Saigon regime, and that the Republic of Vietnam was a ‘free country’. The answer to this puzzle probably lies in Nguyễn Thế Anh’s observation that in the socialist North, where culture and literature were placed under the direction of the state, publications were often issued in large editions and played an important role in society. On the other hand, in the South, where free enterprise reigned, publishing benefited from the latest technical innovations but was often disorderly, with a proliferation of limited and poorly distributed editions (Herbert & Milner 1988: 82).

It should also be noted that all printed material for export in the North came under the state-run enterprise, XUNHASABA. Even though the export of printed material was subject to strict rules and controls, the state distributor worked more efficiently than the private suppliers in the South during the war years. As a result, the British Library sometimes received duplicates from the North which were then donated to the Embassy of Vietnam in London for their own use, illustrating how rare such material was, and how the gathering of such essential information was valued by these two war-torn states was during the Vietnam War.

All these attempts by those who were involved in acquiring material from both sides of Vietnam have paid off. Today, the Vietnamese collection in the British Library is probably the largest in the UK. Even though the collection of manuscripts in Vietnamese is small by comparison with many other language traditions in the British Library, it represents well the literary tradition of Vietnam. We are also continuing to add to the collection of modern printed books, and to date we have about 10,000 items in our collection, which cover a wide range of important fields in social sciences and humanities, such as linguistics, law, literature and anthropology.

Posted by Annabel Gallop at 6:27 AM