The Archive of Yogyakarta digitised

The ‘Archive of Yogyakarta’ refers to a collection of some four hundred manuscript documents in Javanese dating from 1772 to 1813, originating from the court of Yogyakarta. A highly important source for the political, economic, social, administrative and legal history of central Java in the late eighteenth and early nineteenth centuries, the archive comprises official reports, letters, accounts and other documents as well as the private papers of Sultan Hamengkubuwana II (r. 1792-1810, 1811-1812, 1826-1828) and his successor Sultan Hamengkubuwana III (r. 1812-1814). Together with many other Javanese manuscripts on literary, historical and religious subjects held in the royal library, the documents were taken during the British assault on the palace of Yogyakarta in June 1812, and subsequently entered the private collections of three senior officials of the British administration in Java (1811-1816): Thomas Stamford Raffles, Lieutenant-Governor of Java; Colin Mackenzie, Chief Engineer; and John Crawfurd, then Resident of Yogyakarta. The documents were evidently selected by Crawfurd, whose collection was later acquired by the British Museum in 1842, and is now held in the British Library. Currently bound in four volumes (Add. 12303, Add. 12341, Add. 12342 and Add. 14397), the Archive of Yogyakarta has recently been fully digitised and can be accessed directly through the hyperlinks in this post or on the British Library’s Digitised Manuscripts website.

The ‘Archive of Yogyakarta’ is the name given to this treasure trove of documents by the historian Peter Carey, who stresses the extraordinary and perhaps unique historical value of the collection: ‘For almost the first time in Javanese, and perhaps even in Southeast Asian, history, pre-colonial studies can be based on the activities of local actors themselves documented by their own records’ (Carey & Hoadley 2000: 435). Under the auspices of the British Academy, the complete Archive has been published in two volumes, with detailed summaries of the contents and full transliterations of the Javanese text for each document. The first volume presents 106 documents on politics and internal court matters (Carey 1980), while the second volume focuses on economic and agrarian affairs (Carey & Hoadley 2000).  But the second volume also draws on the first in presenting all 420 documents as sources for the history of the Yogyakarta administration in the following five categories: 1) governmental decisions, including letters of appointment, royal orders, legal digests, documents on statute law, treaties and judicial decisions; 2) material resources in the form of appanages [i.e. sources of provision for members of the royal house] and military resources of the realm; 3) court correspondence, both incoming and outgoing; 4) accountancy records, showing both credit in the form of taxes, loans and contributions, and debit from allowances and cash outlays; and 5) miscellaneous documents, including those relating to religious affairs. This thematic presentation was achieved with considerable effort, for three of the four volumes were bound by Crawfurd in a completely random order: ‘land grants for royal officials and lists of revenue payments are mixed up with sumptuary laws [i.e. laws to limit extravagant consumption], political correspondence between the Sultan and the Residents and notes on disputes over villages. More intimate items such as allowances for court ladies, petty kraton accounts, payments for pradikan officials, challenges to cockfights, instructions on fasting (amutih, patih geni) and letters of praise with imagery from the wayang are also interspersed indiscriminately throughout the three volumes’ (Carey 1980: 3). 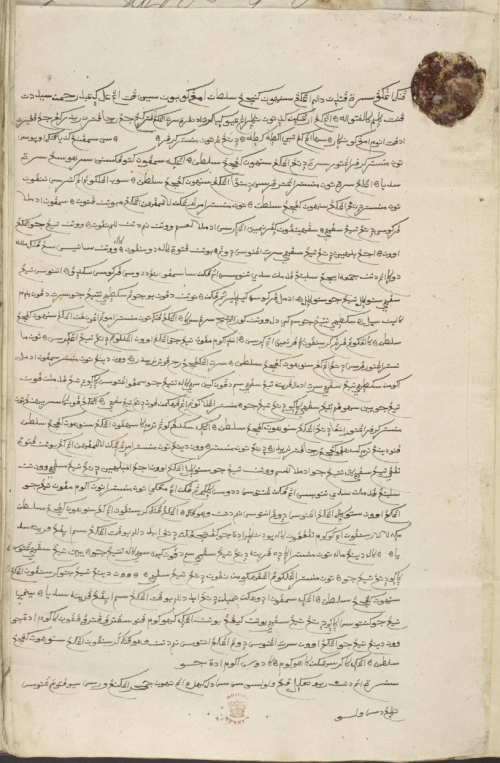 Letter from Sultan Hamengkubuwana II and the Crown Prince of Yogyakarta to John Crawfurd, 18 Dulkangidah A.J. 1738 (4 Dec 1811), written in Javanese in Pégon (Arabic) script (Carey 1980: 79-81). This is one of a number of letters from the sultan and senior court officials to British officials not from the court library, but which were evidently taken by Crawfurd from the British Residency archives in Yogyakarta to add to his private collection. British Library, Add. 12341, f. 146v

The historical value of this archive is beyond doubt, primarily for - as highlighted by the compilers of the second volume - 'the lack of correspondence between what contemporary European accounts deemed important and what the contents of The Archive of Yogyakarta seems to suggest is vital from a Javanese perspective' (Carey & Hoadley 2000: 4). But the documents are also an exceptionally rich source for the study of formal Javanese diplomatics, to be mined for data on the palaeography, phraseology, nomenclature and internal structure of different types of governmental documents, as well as guiding principles on the use and placement of seals, choice of script (whether the Indic-derived Javanese script, read from left to right, or  Pégon, the adapted form of Arabic script which is read from right to left) and materials (whether imported Dutch or other European rag paper, or dluwang, Javanese paper made from the beaten bark of the paper mulberry tree). 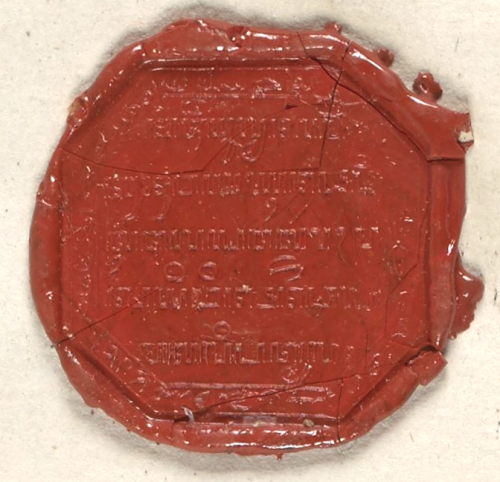 Octagonal seal of Sultan Hamengkubuwana II, inscribed in the centre in Javanese: Ingkang pratandha Kangjeng Sinuhun Hamengkubuwana Sénapati Ingalaga Ngabdurrahman Sayidin Panatagama Kalipatulah (Carey 1980: 76), 'This is the seal of the exalted majesty who carries the world in his lap, the commander of the army in war, servant of the Most Merciful One, lord of the faith, protector of religion, vicegerent of God' (cf. Carey & Hoadley 2000: 436). The tiny inscription in Arabic script in the border has not yet been read. British Library, Add. 12342, f. 208r (detail)

The four volumes of the Archive of Yogyakarta have been digitised by the British Library as part of an ongoing collaboration with the Libraries and Archives Board of the Special District of Yogyakarta (Badan Perpustakaan and Arsip Daerah Istimewa Yoyakarta, BPADIY), focusing on those Javanese manuscripts in the British Library identified by Carey as originating from Yogyakarta. On a recent visit to Yogyakarta, on 22 September 2016 copies of the digitised images of the Archive of Yogyakarta were presented to His Excellency the Governor of Yogyakarta, H.M. Sri Sultan Hamengkubuwana X (the sultan of Yogyakarta is the only hereditary ruler in Indonesia also accorded a constitutional role, in recognition of the heroic support of Sultan Hamengkubuwana IX for the fledgling Republic of Indonesia during the Indonesian revolution, 1945-1949). 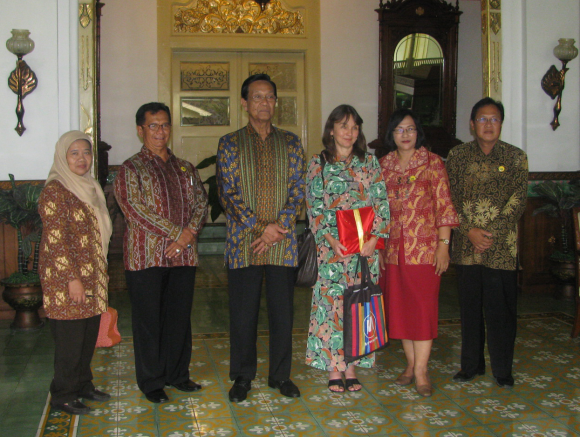 With H.E. the Governor of Yogyakarta, H.M. Sri Sultan Hamengkubuwana X (third from left) and staff of the Libraries and Archives Board (BPADIY) including head of BPADIY Budi Wibowo (second from left), at the 18th-century Kadipaten, former premises of the Crown Prince of Yogyakarta and now the gubernatorial office. Photo by Suhardo, 22 September 2016. 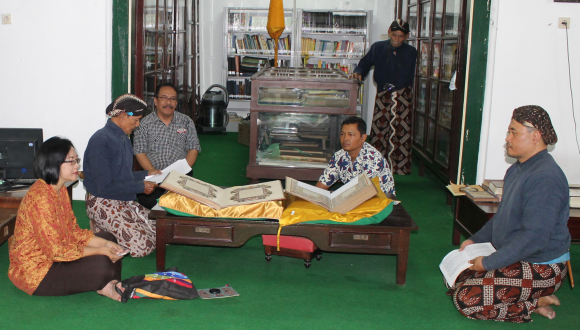 Looking at manuscripts in the Widya Budaya library in the palace of Yogyakarta, with royal librarian K.R.T. Rintaiswara (second left) and staff of the Libraries and Archives Board of Yogyakarta. Photo by A.T. Gallop, 24 September 2016. 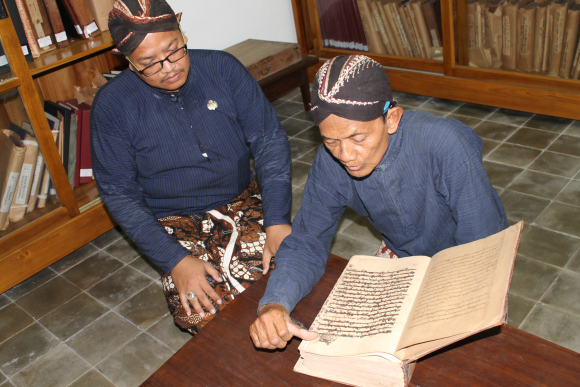 After the British sack of the court of Yogyakarta, only three manuscripts were left in the royal library: a copy of the Qur’an (copied in 1797), the Serat Suryaraja (1774), and a copy of Arjuna Wiwaha (1778) (Carey 1980: 13, n. 11). The manuscripts currently held in the Widya Budaya library therefore mostly postdate 1812, and Romo Rinto shows here a volume of archive documents in Javanese dating from the mid-19th century. Photo by A.T. Gallop, 24 September 2016.

Postscript 22 December 2017
Jennifer Lindsay has reminded me that all the Javanese manuscripts in the Palace of Yogyakarta, held in both the Widya Budaya and the Krida Mardawa libraries, are described in a published catalogue:
Katalog induk naskah-naskah Nusantara. Jilid 2 : Kraton Yogyakarta, disusun oleh Jennifer Lindsay, R.M. Soetanto, Alan Feinstein ; diterjemahkan oleh R.M. Soetanto, T.E. Behrend. (Jakarta : Yayasan Obor Indonesia, 1994).
All the manuscripts have been microfilmed; the original microfilms are held in the National Archives of Indonesia in Jakarta, with copies held at the University of Sydney Library, the Library of Congress, and at Leiden University Library.

One other Javanese manuscript from the Yogyakarta palace library now held in the British Library which has been digitised is the beautifully illuminated Serat Jayalengkara Wulang (MSS Jav 24), described in another blog post: A Javanese manuscript artist at work.

Posted by Annabel Gallop at 5:05 AM