What do you think about our digitised Hebrew manuscripts?

We’ve been digitising Hebrew manuscripts and making them available on the Digitised Manuscripts website since 2013, with generous funding from The Polonsky Foundation. With the recent start of Phase 2 of our digitisation project (funded by the National Library of Israel), we took the opportunity to hear your thoughts! We conducted a survey to find out if and how we can improve access to our digitised Hebrew manuscripts, and whether we can be of assistance with digital research using the collection.

We were thrilled to received 107 responses to our survey, mostly from researchers and academics. They come from a wide breadth of organisations in the UK, Europe, Israel, the US, Canada, Australia, and even Uruguay!

One key issue covered by our survey was accessibility. Our digitised manuscripts are currently available for viewing through the Library’s Digitised Manuscripts website. This platform offers search functionality and a smart viewer, with which you can browse images quickly and in very high resolution. 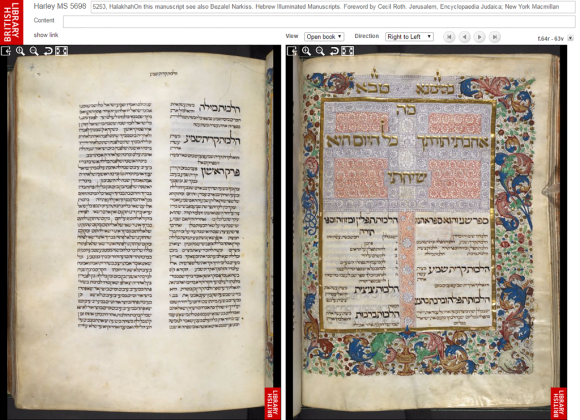 When asked how access can be improved, most respondents wanted to be able to download images, preferably in high resolution. They asked to make the collection free to use, but also to make it clear when one should be aware of usage terms. Being able to view manuscripts’ thumbnails was another suggestion, as well as that our viewer supports IIIF (IIIF – International Image Interoperability Framework – is a set of standards to promote the interoperability and ease of use of digital images, using standard web protocols). People also wanted to be able to share images of digitised manuscripts, for example through e-mail or social media.

Our respondents’ interest was not only in the digitised images, but also in the metadata – our catalogue records. People requested that we make our metadata available for download. In addition, they asked that we update and correct our metadata, or create a framework to crowdsource this task. It was also considered important that the visual appearance of metadata on our viewer is improved. Enhancing search functionality was also a very popular suggestion – people want to find manuscripts of interest more easily. And another prominent request was that we provide a list of all digitised Hebrew manuscripts.

We’re happy to say that we have either addressed or in the process of addressing all of these issues! To start with the latter suggestion, we have made available a list of manuscripts to download as a spreadsheet from the Hebrew Manuscripts website. We have also made our entire set of TEI XML metadata records available for download as a ZIP file (with open license CC-0). We’re also aware that Digitised Manuscripts offers limited search options, and we’re in the process of replacing this viewer with a new one (see below). In the meantime, searching this spreadsheet (e.g. in MS Excel) or filtering the data by column would make it easier to find things and get to manuscripts of interest. 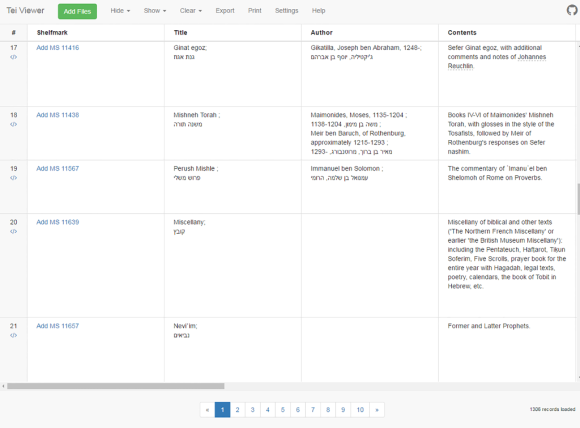 A catalogue records viewer, created by Alex Mendes, enabling to display and export the project’s metadata

Downloading high quality images was indicated as a key necessity among our users. Following the approval of an internal British Library group (Access and Reuse), we are now able to release our images for free as 300ppi JPEGs. We are in the process of preparing those for British Library Labs data.bl.uk website (to be launched in November 2016). This involves assigning the right usage term statement to each manuscript, converting the project’s TIFF files into JPEGs, and compressing these JPEGs – while keeping them in very high quality.

Preparing our collection for free and easy access will also address the suggestion to release our material as open data. Our material will be released as Public Domain, although some of it is technically still in copyright (according to UK copyright law). As this is a very low risk, it will be released for use as Public Domain, but with an appropriate disclaimer. We will make clear which manuscripts fall under which licensing category.

Many suggestions for improvement will be addressed with the transition from the Digitised Manuscripts platform to a new viewer. The new viewer is based on the Universal Viewer technology, an open source project in which the British Library is a partner. The new viewer is replacing legacy viewers for accessing digitised collection items.It will bring together manuscripts, printed books, born digital and sound content. Some of the issues mentioned above will be addressed by this viewer’s functionality:
1.    Features such as Download, Print, Share and Embed.
2.    The Universal Viewer is IIIF compliant.
3.    It enables thumbnails on a side panel, allowing for a quick browse of the manuscript. These can be expanded throughout the whole page (Gallery view), and enlarged or reduced in size as needed.
4.    Better quality viewing experience for digital collection material and metadata.
5.    It will enable the insertion of text transcriptions alongside digitised images of the manuscript represented. The full text would then be searchable.
6.    It will also indicate the relevant license and usage terms for each manuscript. 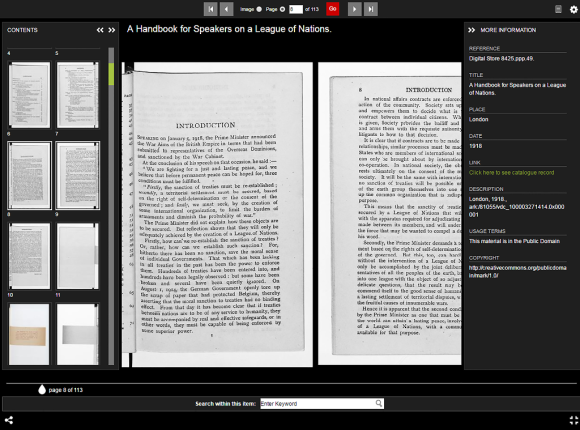 A sample item on the Universal Viewer, demonstrating the viewer’s functionality.

Another goal of the survey was to get an idea of the types of digital tools and techniques used by researchers to analyse digitised Hebrew manuscripts.  Most researchers indicated using digital tools for their work, the most popular being image/script comparison tools, annotations and data visualisations, followed by text mining, image analysis tools and crowdsourcing.

It is clear, however, that we can do so much more to facilitate research in this respect. Several people suggested that the project should be more geared toward research and enable a dedicated platform for some or all tools mentioned above. Special emphasis was made on the need for transcriptions, translations and annotations – and a platform to crowdsource them. These features would not only help promote research in general, but also open up our collection to non-Hebrew readers.

Other suggestions related to the creation of relationships with other digital resources such as catalogues and databases, for better discoverability. These included using Linked Open Data (LOD) to express relationships with other resources in other languages, and creating connections to the web catalogue of the Institute of Microfilmed Hebrew Manuscripts in Jerusalem (IMHM) and to other databases in Jewish studies. It was also suggested that we create API access to search our digitised collection via other platforms.

We are very grateful for these ideas – they are definitely something for us to explore. Whether we create something from scratch, or leverage on platforms or tools that were developed or are in the process of development – these useful suggestions will be examined in terms of priorities and potential future projects.

It was encouraging to see the level of survey participation and feedback, and hopefully we will keep improving our resources for the benefit of our growing audience!

Posted by Annabel Gallop at 6:16 AM