The British Library holds a five-volume set of Ofuda [amulet] albums from which we have been introducing some selected items in our previous AAS blog posts. One of these featured an image which happened to be of Daikoku, and caught the attention of the East Asian Money Curator at the British Museum. She drew our attention to some fascinating coin-shaped charms with images of Daikoku and Ebisu. Daikoku and Ebisu are not only two of the Seven Deities of Good Fortune in Japan, they have also been major votive gods for bringing good luck in answer to the prayers of Japanese since time immemorial. They are considered to be the guardians of the natural produce of land and sea, and while one hosts the annual meeting of eight million gods, the other keeps guard over their vacant shrines. They can sometimes be thought of as father and son, but there are also various other reasons why Daikoku and Ebisu are paired together. 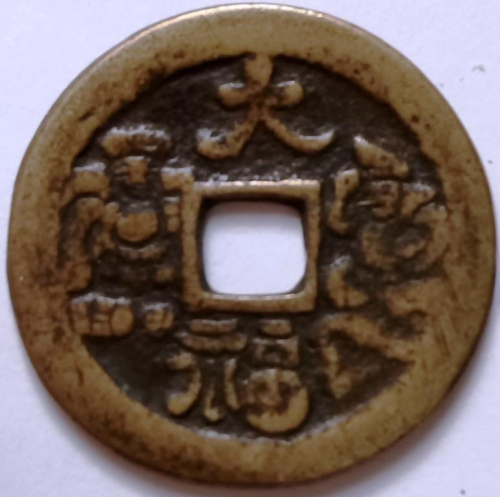 Daikoku is the tutelary god of farming and Ebisu is the deity associated with marine products. This combination covers almost all possible sources of food, one of the fundamental drivers for the development of human society. Japan has always been a country of agriculture (rice) and fishing, and so praying for bountiful harvests of rice and good catches of fish was deeply embedded in people’s daily life and attitudes. 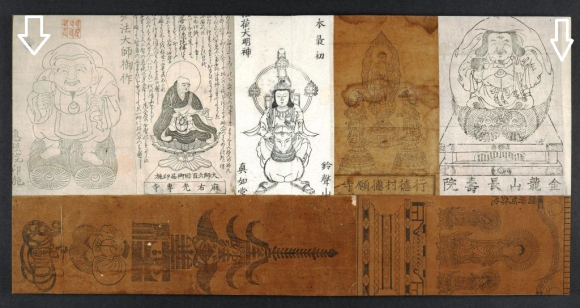 Daikoku is depicted riding on rice bags and Ebisu carries a fishing rod and a big fish, and these associated images directly symbolise their roles: promising a good harvest and a plentiful catch of fish. However these were not their only roles. If we trace the origins of Daikoku and Ebisu back through ancient legends, we learn that their existence itself is a story of constant transformation. 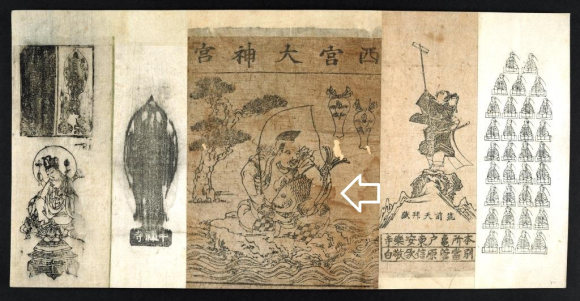 In fact, Daikoku is a mixture of the Japanese Shinto God Ōkuninushi 大国主 and the deity Shiva, one of the principal deities of Hinduism. How did Shiva ‘The Destroyer’ come to be transformed into this jolly happy figure carrying a big bag of presents on his back?

The answer is linked with the spread of Buddhism into East Asia.  When Chinese monks travelled to India as the birth place of Buddhism to learn about the origin of the Buddha’s doctrines, they translated many sutras into Chinese. Chinese is an ideographic language without phonetic symbols so the early Chinese scholars had to match up every uncommon foreign word with the closest equivalent to their own Chinese ideographs.

Shiva was absorbed into Tantric Buddhism as one of the deities guarding the Buddha. Shiva has as his avatar Mahākāla, literally meaning “great” + “darkness or blackness”, which correspond to the Chinese ideographs 大 + 黑 (Dà hēi). In the Buddhist pantheon, Shiva was thus transformed into Dàhēi tiān大黑天, a brave protector of Buddhism from all demons against the virtues of Buddha.

Eventually, when Shiva =  Dàhēi 大黑reached Japan he was not only accepted as one of the Buddhist Devas, but also merged with a Japanese god. The Japanese Shinto god Ōkuninushi 大国主, could be read phonetically as Daikokunushi, very similar to the sound of Dàhēi 大黑 in the Japanese phonetic reading 'Daikoku'. In Japan Buddhism and Shinto belief are closely connected and over time have influenced each other, becoming mixed together.  Thus Daikoku大黒 can be both a Buddhist Deva and an avatar of Ōkuninushi. 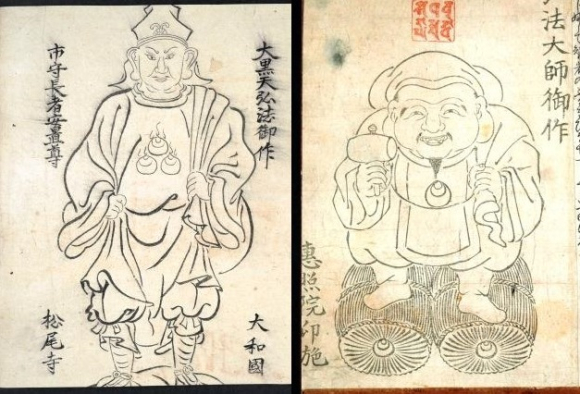 Ōkuninushi is the god of the completed construction of the world situated between heaven and hell, known in Japanese as the ’Ashihara no Nakatsukuni 葦原中国’, which literally means “The middle country of reed beds”, and which represents the physical land of Japan. Ōkuninushi builds the land mass and the villages, introduces farming and treats the sick. He blesses all good relationships and lives in Izumo. Once a year, all Japanese gods assemble at his great shrine and have an annual meeting to report to each other – a sort of divine summit meeting!

However, there are a few exceptions, such as Ebisu 恵比寿. He stays at his own shrines to keep his eyes on people who are praying, as well as to watch over the vacant shrines whose gods have departed to attend the great shrine in Izumo.

Ebisu is an indigenous Japanese Shinto god, who has not been combined with other religious figures. Japan is surrounded by seas so it is natural for the ancient Japanese to worship the sea.  Ebisu is often symbolised by marine flotsam. He represents visitors from across the sea and is the god of what the sea brings forth. Ebisu is often associated with Hiruko 蛭子. 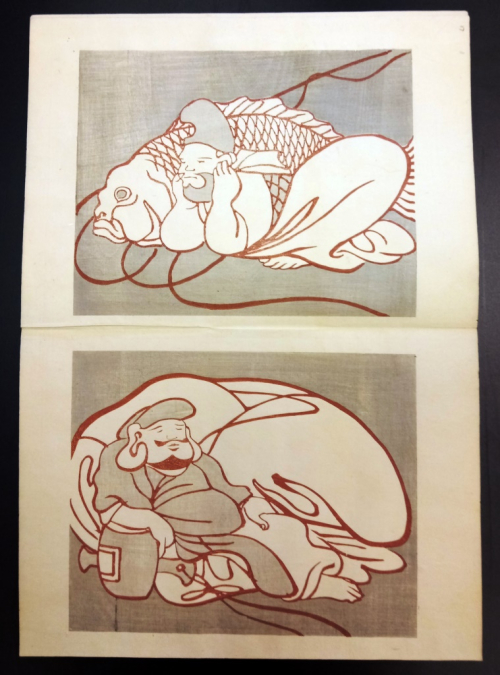 Hiruko was born as the imperfectly formed child of Izanagi and Izanami as they were trying to form the land of Japan. Hiruko did not have a firm enough body to become an island such as Awaji island or Shikoku island. He was placed in a tiny boat and abandoned to the sea. Hiruko survived this trial and was eventually washed ashore. This legend led to Hiruko being linked to visitors from the sea bringing forth sea resources, and eventually Ebisu was identified as Hiruko.

Ebisu is also associated with Kotoshironushi 事代主, one of the sons of Ōkuninushi大国主, who loves fishing and is deeply connected with the sea.  Kotoshironushi was the key deity in Ōkuninushi’s negotiations with Upper Heaven (Takamagahara 高天原), to reach agreement to pass on the role of rule of Japan to the descendants of the Sun Goddess.  In return Ōkuninushi insisted that a great shrine be built for him in Izumo. Therefore Ebisu, who is associated with Kotoshironushi, plays an important role in patrolling while all the other gods are meeting at his father’s shrine. 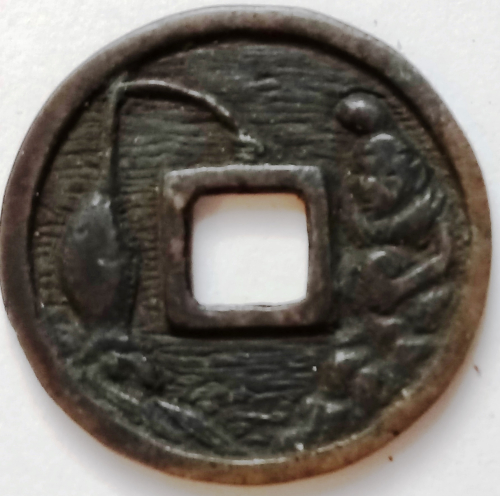 Daikoku and Ebisu continued to develop and build up Japan, bringing a rich variety of produce from land and sea which led to the accumulation of wealth and the evolution of society.  It therefore makes sense to the Japanese - and those interested in Japan and its culture - that Daikoku and Ebisu, the chief guardian deities of happiness and good fortune, should constantly turn up in the shape of charms or amulets. 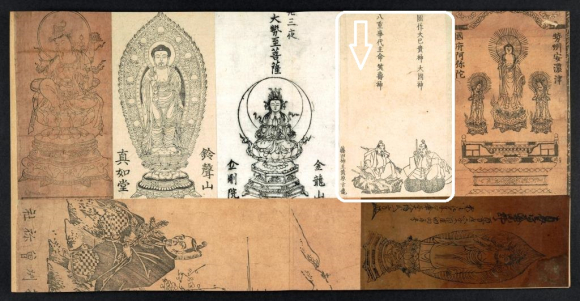 Posted by Annabel Gallop at 9:42 AM