In a recent post in our Medieval Manuscripts blog (Every People Under Heaven), Cillian O'Hogan wrote about the early 13th century Harley Greek Gospels and the 12th century Melisende Psalter and its ivories which are currently on display at the Metropolitan Museum of Art in a stunning exhibition Jerusalem 1000-1400: Every People Under Heaven. With some 200 exhibits from 60 lenders from all over the world, the exhibition tells the story of Jerusalem, a polyglot city and cultural centre during the Crusades, the rule of the Ayyubids and the Mamluk Empire. In this post I will highlight one of our Arabic loans, Add.MS.11856, a translation of the four Gospels, copied in Palestine in 1336. 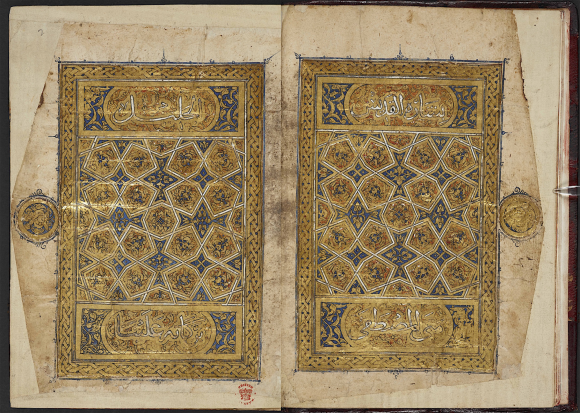 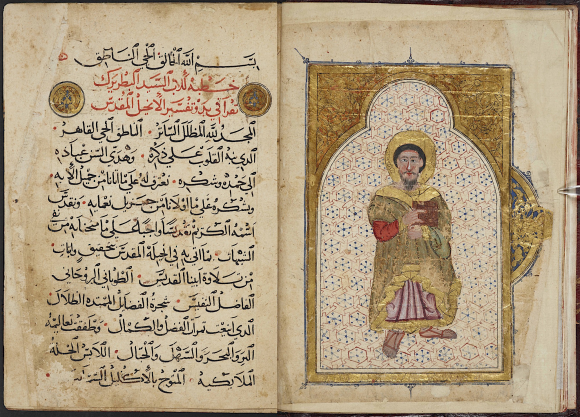 Portrait of St. Matthew followed by the translator's prayer and introduction to the Gospel of St. Matthew. Palestine, 1336 (BL Add.MS.11856, ff. 2v-3r)

Although the Bible may have been translated into Arabic as early as the late seventh century, it was during the eighth and especially the ninth centuries that translations were made under Christian patronage. These were produced in the multilingual monastic communities of Palestine. The earliest surviving dated manuscript of the Gospels in Arabic is dated 859 and is in the library of the Monastery of St. Catherine at Mount Sinai (Griffith, p. 113). In his 'Abridged List of the Arabic Gospel Manuscripts' Hikmat Kashouh (below, pp. 55-8) lists 18 copies in the British Library collections of which the oldest, Add.MS.14467, dates from the 10th century. Add.MS.11856 is a copy of what became known as the Arabic Vulgate version which, translated from Greek, Syriac and Coptic, developed by the 13th century and remained the standard Arabic version until modern times. 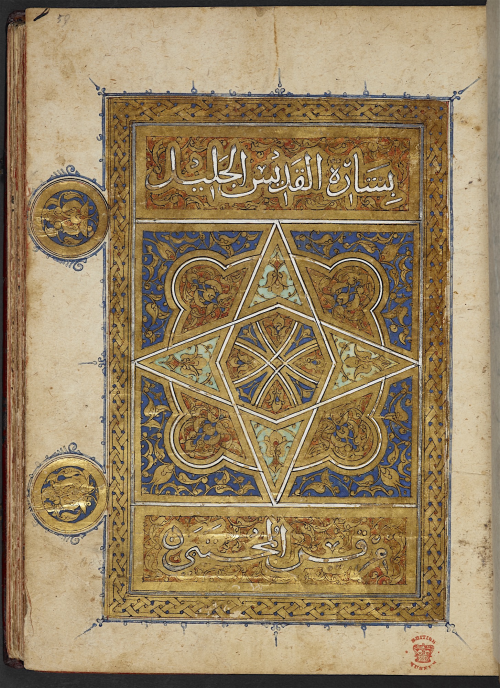 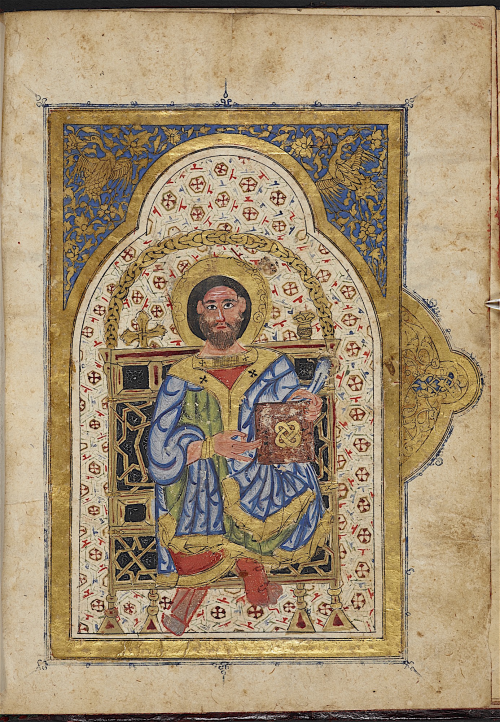 Our manuscript, Add.MS.11856, was completed on 20 Jumada I AH 737 (25 Dec. 1336) and includes four portraits of the evangelists, a double page illuminated heading at the beginning and three single page headings at the start of the following Gospels. The copyist was Yūsuf ibn Walī al-Dawlah Mīkhāʼīl ibn Faḍl Allāh, the Treasury scribe (kātib al-khizānah). Originating in Palestine, the manuscript had various owners, one being the early Albanian writer and national hero Peter Bogdani (ca. 1630-89), Archbishop of Skopje and alumnus of the Collegio di Propaganda Fide, Rome, to which he subsequently presented it. It was acquired in 1841 by the British Museum as part of the collection of Samuel Butler (1774-1839), Bishop of Lichfield. 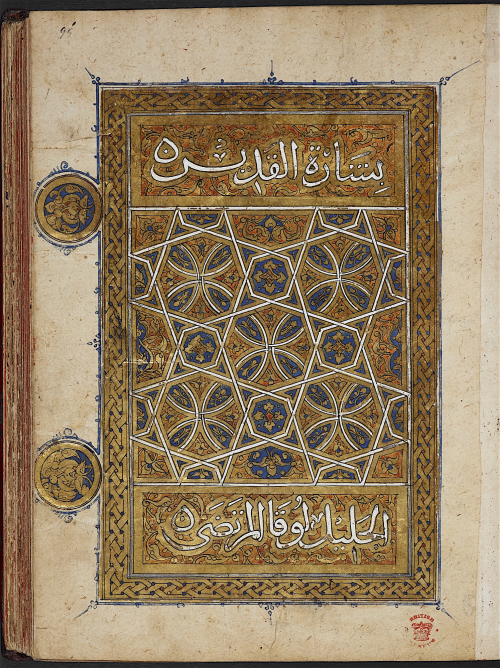 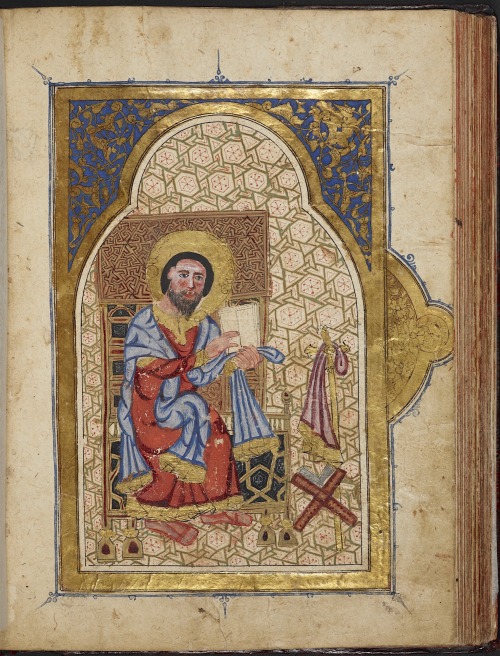 Perhaps the most striking feature of this manuscript is its illumination and decoration which clearly demonstrate the cosmopolitan nature of the community in which it was written. Each Gospel is introduced by a portrait of its author holding a copy of the book, but whereas these portraits are based on Byzantine models, the opening and the introductory leaves to each Gospel are richly decorated in a carpet page design - so called because of its close resemblance to intricately woven carpets - which is in keeping with Qur'ans dating from the Mamluk period. The opening of each Gospel consists of two illuminated bands containing the title above and below while the central panel is filled with an abstract geometrical pattern. Decorative rosettes in the margins complete the design. 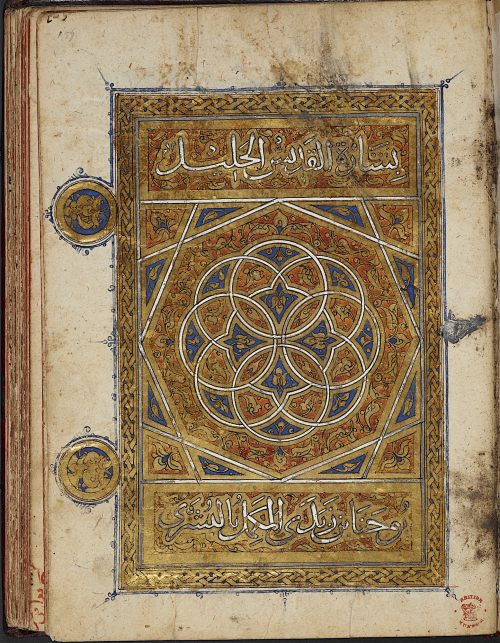 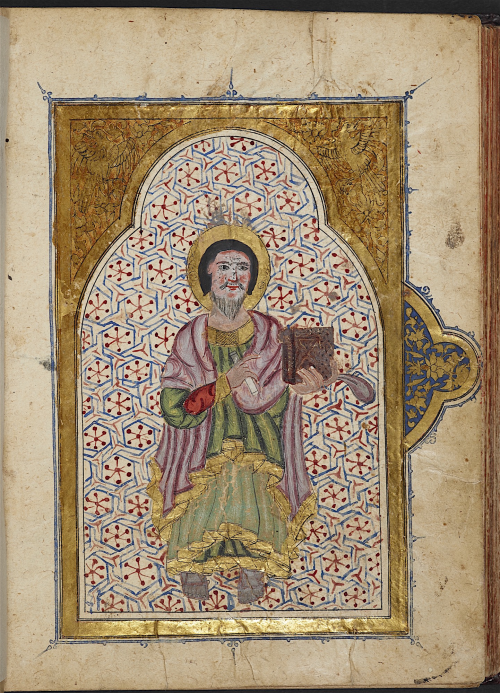 The exhibition Jerusalem 1000-1400: Every People Under Heaven is open at the Met. until 8 January 2017. If you don't have the opportunity to go in person, there is a detailed catalogue available by the exhibition curators Barbara Drake Boehm and Melanie Holcomb.

This manuscript has now been digitised and will shortly be available on our Digitised Manuscripts site, so watch this space for more details!

Ursula Sims-Williams, Asian and African Studies, with thanks, for help, to Colin Baker