To celebrate our new series of South Asian seminars and especially the focus on food with Neha Vermani's talk this evening Mughals on the menu: A probe into the culinary world of the Mughal elite I thought I would write about our most ʻfoodyʼ Persian manuscript, the only surviving copy of the Niʻmatnāmah-i Nāṣirshāhī (Nasir Shah's Book of Delights) written for Sultan Ghiyas al-Din Khilji (r.1469-1500) and completed in the reign of his son Nasir al-Din Shah (r.1500-1510). We are planning to digitise this manuscript in the near future but meanwhile I hope some of these recipes will whet your appetite. 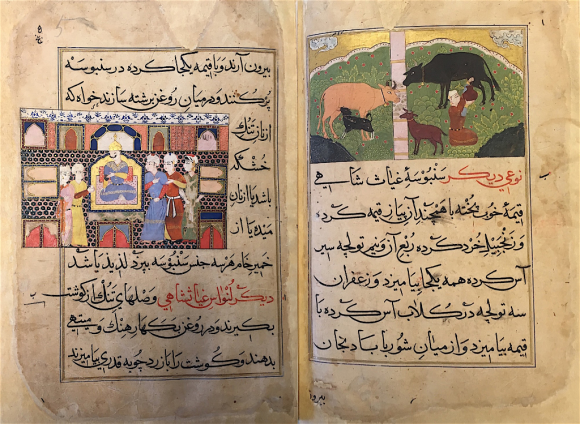 This beautifully written and illustrated work was composed for the Sultan of Malwa Ghiyas al-Din Shah Khilji who ruled from 1469 to 1500. According to the ʻAdilshahi historian Firishtah[1] this colourful ruler shortly after his accession,

...gave a grand entertainment; on which occasion, addressing his officers, he stated, that as he had during the last thirty-four years been employed constantly in the field, fighting under the banners of his illustrious father, he now yielded up the sword to his son, in order that he might himself enjoy ease the rest of his days. He accordingly established within his seraglio all the separate offices of a court, and had at one time fifteen thousand women within his palace.

These included teachers, musicians, dancers, embroiderers, women to read prayers, and persons of all professions and trades. 500 female Turks, dressed in men's clothes, stood guard on his right, armed with bows and arrows, and on his left, similarly, 500 Abyssinian women also in uniform, armed with firearms. This might seem quite an extravagent description but it is confirmed by the paintings and recipes in the book which describe in detail the methods for cooking luxurious savouries and sweetmeats, for preparing medical remedies, for making perfumes[2] and for going on expeditions, whether in battle or hunting.

The Ni’matnāmah is undated and there are many unanswered questions about the format it has today. The first few leaves have been added later and there is no expected author’s introduction. The main work appears to end on folio 161v and then a new section begins on folio 162v which has the title Kitāb-i Niʻmatnāmah-i Nāṣirshāhī (‘Nasir Shah’s book of delights’). Altogether at least 15 leaves are missing which were extracted at various different times before it was acquired by the East India Company after the fall of Seringapatam in 1799. It seems most likely that the first part of the work at least was written in the latter part of Ghiyas Shah’s reign and then perhaps the second section was added after his son had taken over in 1500. The 50 illustrations demonstrate a fusion of Persian ‘Turkman’ Shiraz influence of the second half of the fifteenth century with a progressively Indic style, especially in the use of colours and the style of the costumes and architecture.

A flavour of the Niʻmatnāmah
We are very fortunate in having a published facsimile (albeit black and white) and translation of the Niʻmatnāmah made over the course of several years by Norah Titley after her retirement from the British Library in 1983. Below I quote her translations alongside some of the illustrations.

Mix together well-cooked mince with the same amount of minced onion and chopped dried ginger, a quarter of those, and half a tūlcha [a measure] of ground garlic and having ground three tūlchas of saffron in rosewater, mix it with the mince together with aubergine pulp. Stuff the samosas and fry (them) in ghee. Whether made from thin course flour bread or from fine flour bread or from uncooked dough, any of the three (can be used) for cooking samosas, they are delicious. (Titley, p. 4) 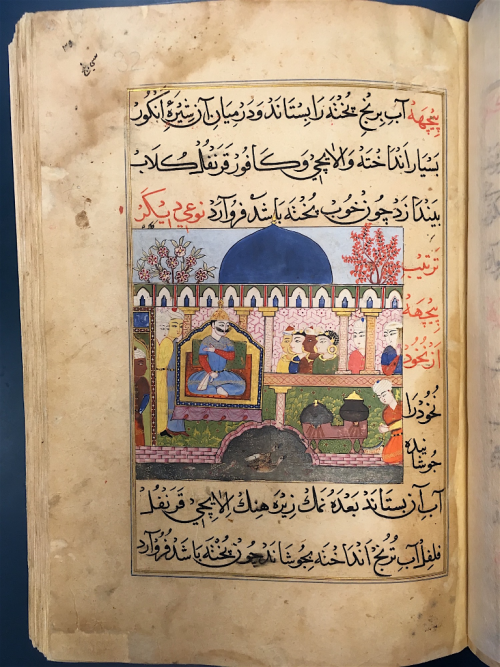 A recipe for making broth

Another recipe for the method of  pīchha, namely the surplus water that is removed from the cooking pot after cooking rice and separating it. Put mūng pulse into the water and boil it. Chop fresh sandal and take its juice. Put the myrobalan and cardamoms into it and cook it. Put in salt. When it is cooked add some mint leaves and serve it. (Titley, p. 17) 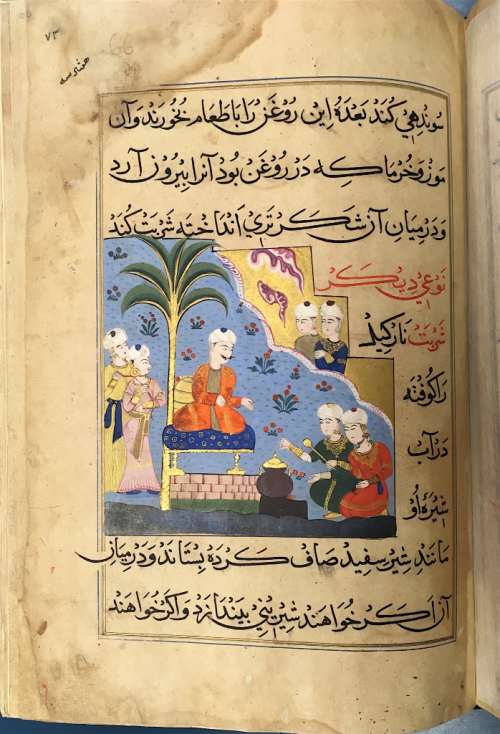 A recipe for making sherbet

Another recipe for sherbet: mince coconut and leave it (to soak) in sweetened water. Strain off the coconut milk and, if desired, put the syrup in it and also mangoes if so wished. Then drink it with bhāt and add fresh ginger, onions, lime juice, cardamoms, cloves, pepper, turmeric and fenugreek and flavor it with asafoetida. Then drink it with bhāt [cooked rice or maize]. (Titley, p. 32) 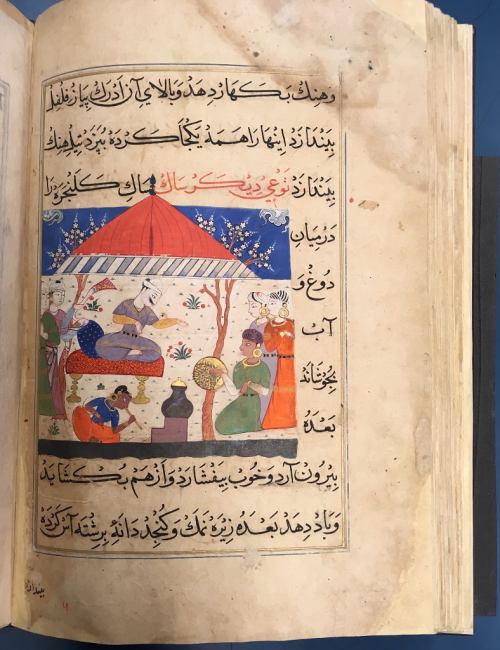 A recipe for cooking greens

Another recipe for green vegetables: boil vine greens in dūgh and water. Then take them off, squeeze them well and open them out and fan them. Then having roasted and ground cumin, salt and sesame seeds, add them. (Titley, p.38) 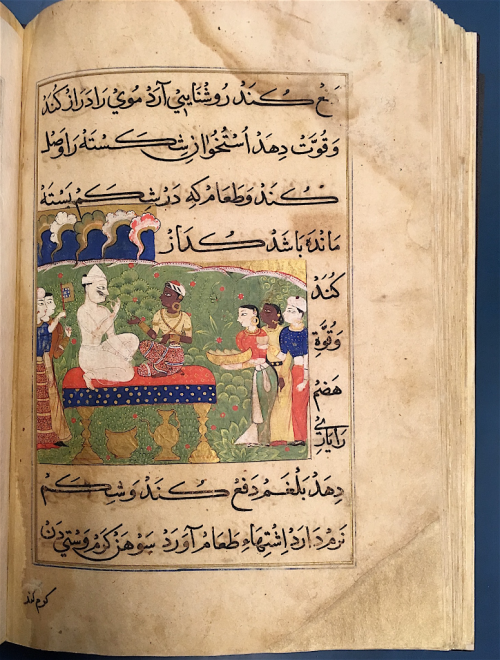 On the uses of and recipes for betel

The qualities of that tanbūl are that the teeth are strengthened, diseases of the tongue, lips, gullet, throat and windpipe are prevented, as is inflammation of the chest. All the foregoing diseases are prevented and the intellect is strengthened, the eyes made bright, the quality of hearing is improved, the nose is purified, halitosis is banished and all illnesses are repelled. Hair becomes longer and shinier and is strengthened, broken bones mend and food that is bound up in the stomach is dissolved and digestion of food is assisted. Phlegm is prevented, the stomach is soft and an appetite for food is enhanced and it makes for a life of beauty and chastity. Coarse wind that may be in the stomach is relieved. It is astringent so bile and excess blood are decreased and phlegm is prevented. Blood is purified, ejaculation is delayed, gripes are cured and the stomach is tightened. If it is rubbed on the skin of the body, leprosy is driven away and the colour of the skin is made white and bad odours are prevented. It is the jewel of the mouth, the mouth is purified and the ardour of passion is increased. (Titley, p.50)

This universal panacea is followed by a list of 57 separate ingredients consisting of flowers, herbs, nuts and spices. 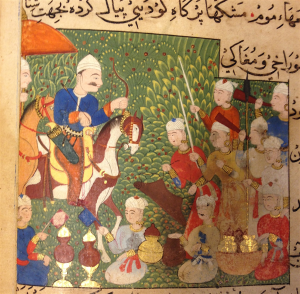 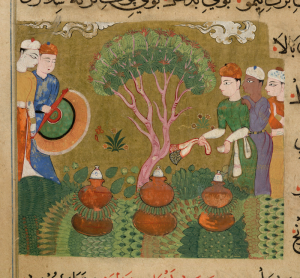 The history of the Niʻmatnāmah
The details of what happened to the Niʻmatnāmah between the time of its completion ca. 1500 and its arrival in London after the fall of Seringapatam in 1799 are far from clear. However there are some facts of which we can be certain. An inscription on folio 196v mentions that the manuscript was inspected on 24 Sha’ban 978 (21 Jan 1571). Unfortunately there isn't any indication of where this was done. 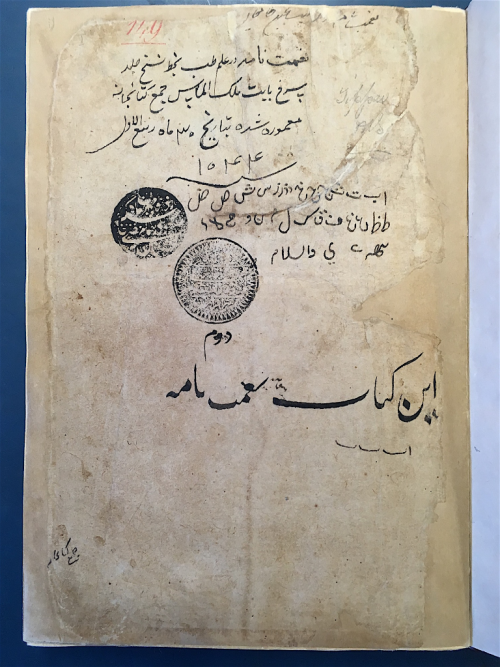 Another inscription on folio 1r reads: “Niʻmatnamah on the science of medicine in naskh writing, in a red binding, from the possession of Malik Almās, entered the court library on 22 Rab I 1044 (15 Sept 1634)”. A similar inscription, dated eight days later, occurs on the flyleaf (above). These were previously thought to be Mughal inscriptions but the wording is identical to inscriptions used by the ʻAdilshahi librarians. Moreover the large circular seal on the flyleaf can now be identified conclusively as the circular seal of Sultan Muhammad ʻAdil Shah who ruled in Bijapur from 1627-57. The seal itself is not very clear but can be read by comparing it with a better preserved copy on a manuscript from Bijapur. It contains the sajʼ (coin legend in verse):
Dārad az luṭf-i ḥaqq sar afrāzī
Sulṭān Muḥammad Shāh ghāzī
“By the grace of God he has eminence, Sultan Muhammad Shah the conqueror.”

The second smaller seal has so far defied interpretation! However there is no reason to think it is a Mughal seal nor that the manuscript has in fact any Mughal connection at all. 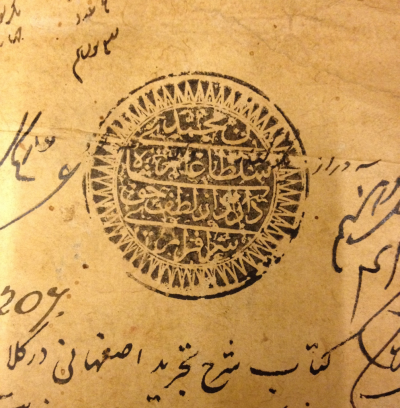 As for the previous owner Malik Almas, there was someone of this name in Golconda who died in 1674. He served as a steward of Sultan Muhammad Qutb Shah (r.1580-1612) and in the reign of Sultan ʻAbd Allah (1626-72), he became superintendent of buildings[3]. In 1633 Muhammad ʻAdil Shah married Sultan ʻAbd Allah's sister, Khadija Sultana, so if this the same Malik Almas, a possible scenario might be that the Niʻmatnāmah came to Bijapur from Golconda with Khadija, perhaps as a wedding present?

From Bijapur the manuscript was acquired by Tipu Sultan and came as part of his collection to the Library of the East India Company in Leadenhall Street, London between 1806 and 1808. Unfortunately there doesn't seem to be any identifiable record of it in the contemporary lists of Tipu's Library (see my earlier blog Revisiting the provenance of the Sindbadnamah) nor in the printed catalogue of the collection by Charles Stewart (A Descriptive Catalogue of the Oriental Library of the late Tippoo Sultan of Mysore. Cambridge, 1809).

I am grateful to colleagues Saqib Baburi and Keelan Overton for discussing some of the problems with me.
Ursula Sims-Williams, Asian and African Collections

[1] John Briggs, History of the rise of the Mahomedan power in India, till the year A. D. 1612 / translated from the original Persian of Mahomed Kasim Ferishta, Vol. 4. London: Printed for Longman, Rees, Orme, Brown, and Green, 1829.
[2] By chance William Dalrymple has just published an article in the Economist's 1843 magazine “Scents and sensuality” on ittars and perfumes, particularly mentioning their use in the Niʻmatnāmah.
[3] See SA Bilgrami, Landmarks of the Deccan. Reprinted Delhi, 1992, pp.102-4).

Posted by Ursula Sims-Williams at 4:40 AM