In tonight’s episode of Treasures of the British Library (Sky Arts, 21.00 Tuesdays), Julia Donaldson, writer and author of The Gruffalo, talks to Dr Muhammad Isa Waley about one of our most engaging Persian manuscripts, a copy of the Anvār-i Suhaylī or ʻLights of Canopusʼ - the brightest star in the southern constellation of Carina - which was copied for the Mughal Emperor Jahangir (r. 1605-27). 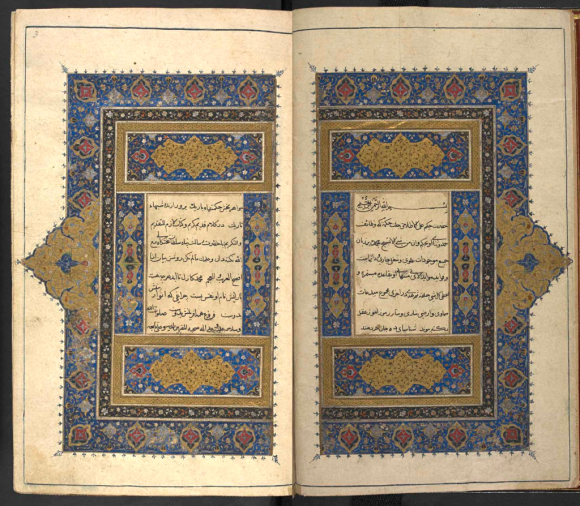 The Anvār-i Suhaylī, is a 15th century version of a story of two jackals, Kalilah and Dimnah, by the Timurid author Ḥusayn Vāʻiz̤ Kāshifi. It is based on a collection of interrelated fables, mostly about animals, set within a frame story, which became best known in the West as the Fables of Bidpai and was first published in English in 1570 as The Morall Philosophie of Doni.

The fables owe their origin to India where they are best known in Sanskrit as the Panchatantra, but it was largely through the Arabic translation by Ibn al-Muqaffāʻ (died c. 757) that they became so popular in Persian. The story describes how the Sasanian king of Iran, Anushirvan (Khusraw I, r. 531-579), heard of a book treasured by the kings of India which had been compiled from the speech of animals, birds, reptiles and wild beasts. Anushirvan sent his physician Burzuyah on a mission to India to discover the book and Burzuyah returned with a copy which he translated into Middle Persian. The original translation is lost but the stories were re-translated into Arabic and Syriac, and then from Arabic into Persian and other languages.

At the end of the 15th century the Timurid Sultan Husayn Mirza Bayqara (r.1469-1506) asked Ḥusayn Vāʻiz̤ Kāshifī to produce another, simplified, version in Persian and it was this which subsequently became the most popular, especially with the Mughal Emperors in India who commissioned several luxurious copies. 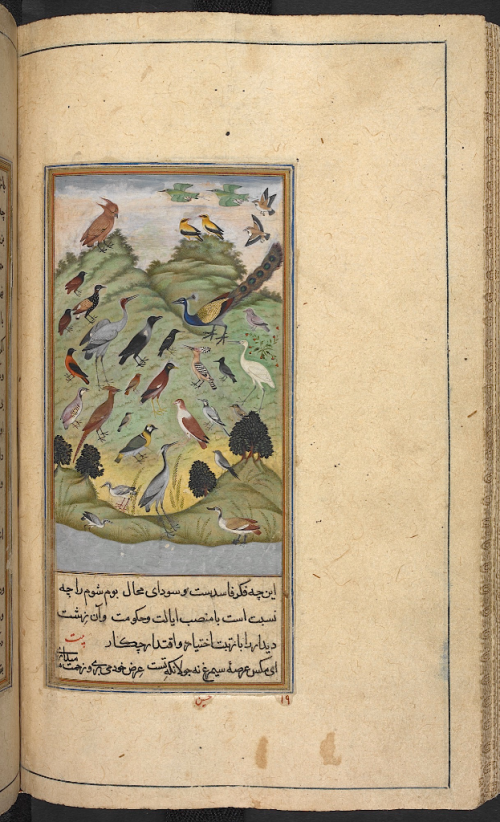 The eloquent crow successfully persuades the assembly of birds not to elect the owl as their leader. Artist: Ḥusayn (Add.MS.18579, f.201v)

The manuscript featured in Julia Donaldson's programme was created for the Mughal Emperor Jahangir and completed in AH 1019 (1610/11) though its 36 miniatures were probably painted earlier while Jahangir, as Prince Salim, held court in Allahabad. The paintings are mostly ascribed to well-known Mughal artists and two are personally dedicated to Prince Salim and dated AH 1013 (1604/5).

As in the story of the Gruffalo, a mouse hero features several times in the Anvār-i Suhaylī (see our blog The Cat and the Rat: a popular Persian fable). To mark the programme we have selected a few of the other stories to illustrate the charm of this ever popular work. This manuscript has now been digitised and you can read the whole work here. 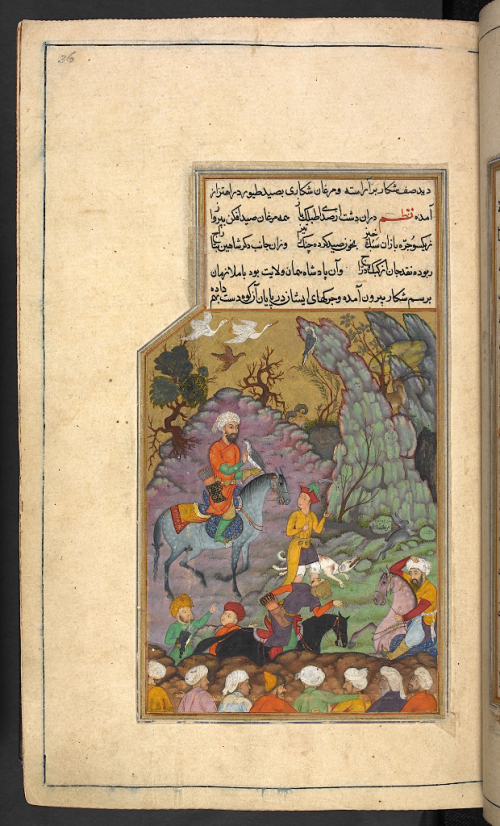 The story of the young falcon (watching from the rocks) who usurped the position of the king's favourite falcon. This painting is dated AH 1013 (1604/5) and signed by the artist Aqā Muḥammad Riz̤ā who describes himself as the ‘disciple of padshah Salim’ (Add.MS.18579, f.36r) 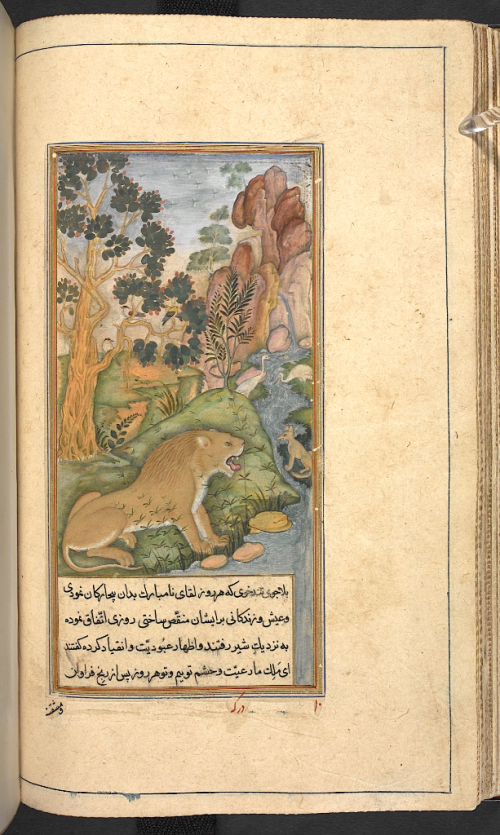 In this illustration to the story of the lion and the hare, the clever hare reports to the ferocious but stupid lion that the reason he was late for his appointment to act as the lion's dinner was because he had been delayed by an even more ferocious lion. The lion asked to be taken to this potential rival and the hare took him to a well. On seeing his own reflexion the lion jumped in and drowned. Artist: Durga (Add.MS.18579, f.77v) 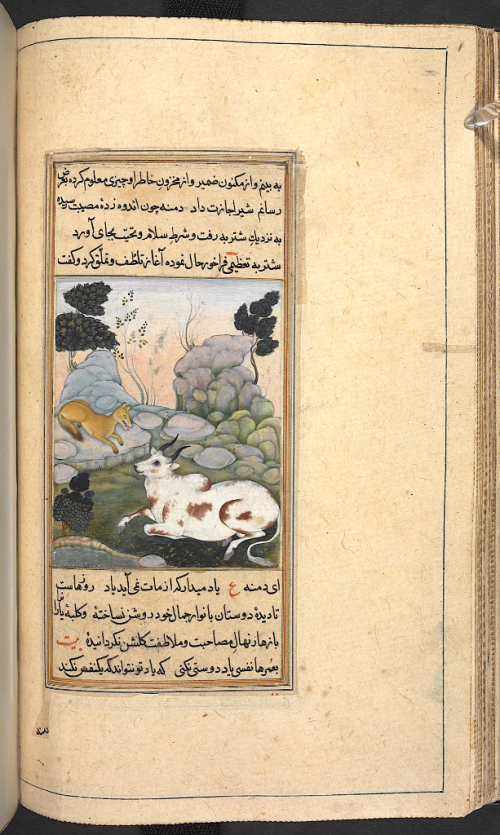 The duplicitous jackal Dimnah tricks the ox Shanzabah into thinking that his ally the lion has turned against him and is about to eat him (Add.MS.18579, f.87v) 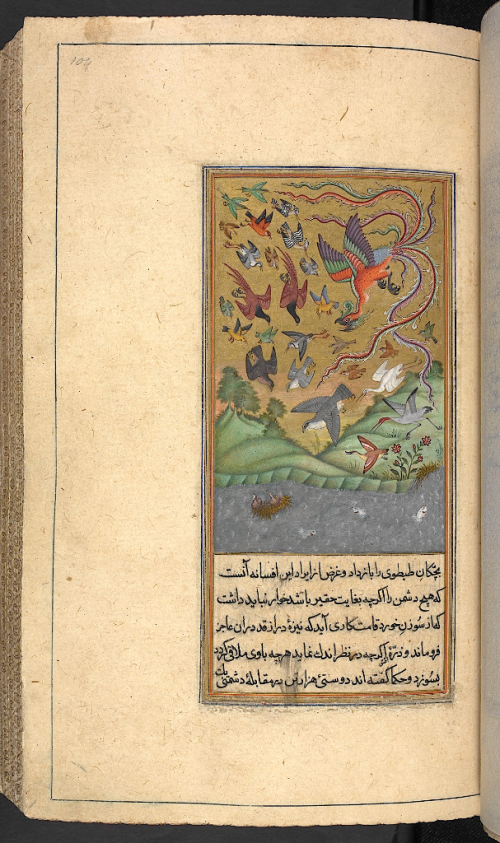 Two sandpipers had built their nest by the sea. When the sea carried their young away they complained to the other birds. Their king, the Simurgh, collected a huge army together and forced the sea to give the young birds back, thereby humiliating him — the moral being that one neglects even the humblest creature at one’s own cost (Add.MS.18579, f.104r) 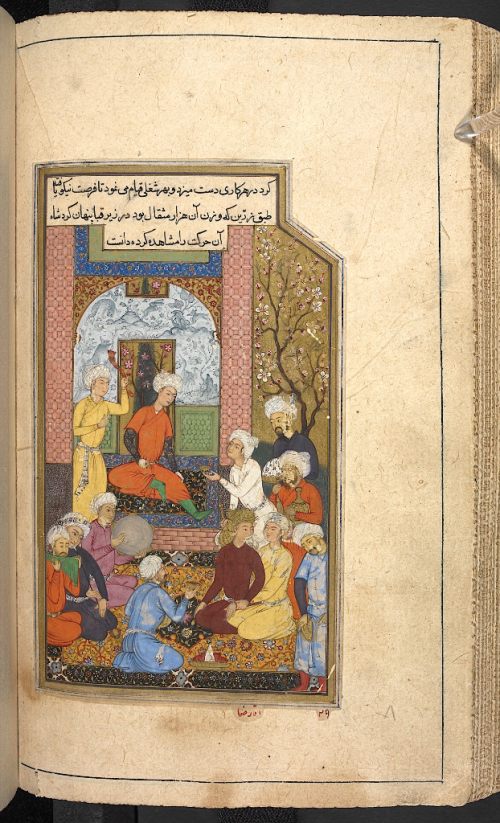 The story of the king of Yemen and his servant who stole a golden dish but was ultimately forgiven. Artist: Aqā Riz̤ā (Add.MS.18579, f.331v)

Eastwick , Edward B. The Anvár-i Suhailí, or the Lights of Canopus: Being the Persian Version of the Fables of Pilpay, or the Book “Kalílah Und Damnah”. Hertford: Austin, 1854.
Wollaston, Arthur N. The Anwár-i-Suhailí; Or, Lights of Canopus, Commonly Known As Kalílah and Damnah. London: W.H. Allen & Co, 1877.
Wilkinson, J. V. S. The lights of Canopus: Anvār i Suhailī. London: The Studio, 1929.
J.P.Losty and Malini Roy, Mughal India: Art, Culture and Empire: Manuscripts and Paintings in the British Library. London: The British Library, 2012, pp. 88-92.

Posted by Ursula Sims-Williams at 12:21 AM