Today's post is from guest contributor and regular visitor to Asian and African Collections, Sunil Sharma, Professor of Persianate and Comparative Literature at Boston University

British Library Or.7094 is an illustrated copy of the late Ottoman Turkish poetic work, Fazıl Enderunlu’s Zenanname (ʻBook of Womenʼ), which describes the positive and negative qualities of the women of the world along with satirical and moralistic parts at the end. The text is a poem in mesnevi form that was completed in 1793. I became interested in this work because typologies of women began to appear in Mughal and Safavid poetry and painting in the seventeenth and eighteenth centuries and there was the possibility of doing comparative scholarship across Persianate cultures. 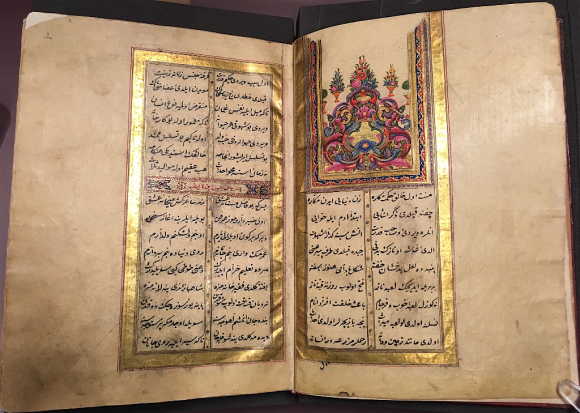 The British Library copy of the Zenanname appears to be dated 1107 (1695/96)[1], but this is obviously a mistake since it wasn't completed until almost a century later. Additionally, Norah Titley (see below, pp.39-40), points out that there is a historical anachronism with respect to the earlier date because “the French woman in folio 43r is wearing a costume connected with the French revolution, i.e. post-1793”. The manuscript includes thirty-eight paintings[2], and all but the first and last two depict women of various ethnicities and nationalities. Another almost identical copy of this work is located in Istanbul[3]. The text was printed numerous times in the nineteenth century, albeit without illustrations, and has been fully or partially translated into modern Turkish, French, and English, though none of these are entirely faithful or idiomatic. 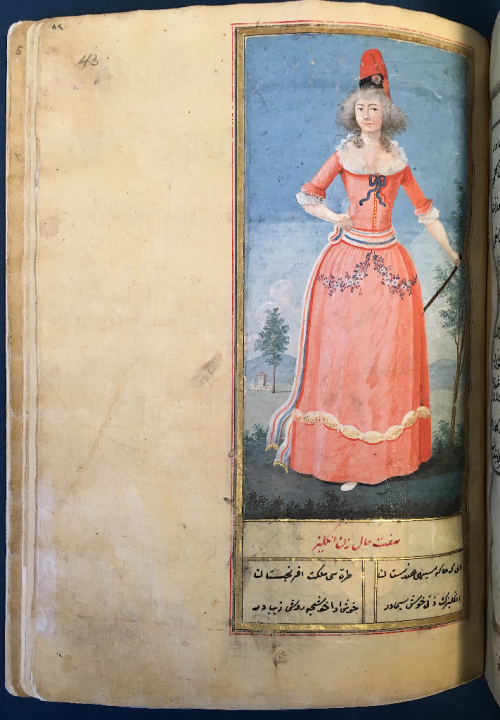 French woman in a costume of the French Revolution (British Library Or.7094, f.43r)

The women in the Zenanname represent every type known to the Ottomans from their empire and beyond. The paintings show women who are from a particular place or part of a community, comprising Indian, Persian, Baghdad, Sudan, Abyssinia, Yemen, Maghrib, Tunisian, Hijaz, Damascus, Syrian, Anatolian, the Aegean Islands, Spanish, Istanbul/Constantinople, Greek Christian, Armenian, Jewish, Gypsy, Albanian, Bosnian, Tatar, Georgian, Circassian, Christian, German, Russian, French, English, Dutch and American (from the New World). Not all of these women are praised by Fazıl, some are lampooned for their sexual behavior or nature in misogynistic terms. In these verses on the Englishwoman, translated by the Ottoman literature scholar E.J.W. Gibb - to whom this manuscript previously belonged -, the poet celebrates the beauty of this type (Gibb, pp. 241-2):

O thou, whose dusky mole is Hindustan,
Whose tresses are the realms of Frankistan!
The English woman is most sweet of face,
Sweet-voiced, sweet-fashioned, and fulfilled of grace.
Her red cheek to the rose doth colour bring,
Her mouth doth teach the nightingale to sing.
They all are pure of spirit and of heart;
And prone are they unto adornment’s art.
What all this pomp of splendor of array!
What all this pageantry their heads display!
Her hidden treasure’s talisman is broke,
Undone, or ever it receiveth stroke. 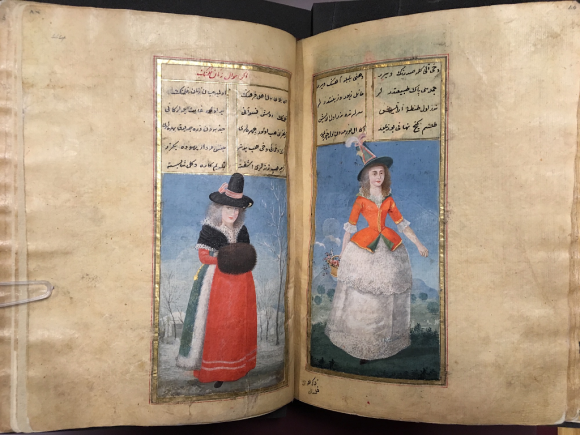 Right: an English woman carrying a basket of flowers and wearing a tall green hat, similar in shape to the Welsh national hat
Left: Dutch woman with her hands in a muff, against a snow-covered landscape (British Library Or.7094, ff.43v-44r)

The Zenanname was actually a companion volume to a work Fazıl Enderunlu composed first, the Hubanname (Book of Beauties), in 1792-93, which is a catalogue of the boys of the world[4]. The text of these works is related to the şehrengiz genre (shahrashub in Persian), although much more sexually explicit. Most şehrengiz poems of this kind described the young lads of a city, but there was at least one Ottoman Turkish poem written in the sixteenth century on women, the prostitutes of Istanbul, by ‘Azizi. The images in the Zenanname, on the other hand, are related to the genre of costume albums produced in the sixteenth and seventeenth centuries[5].

Fazıl Enderunlu, also known as Fazıl Bey, was initially employed at the Ottoman court as a poet but was let go from his position after being implicated in a romantic scandal. He found patrons outside the court for his later works in order to “try to accommodate and gratify the interests and literary tastes of a socially and culturally diverse network of men and women” (Hamade, p. 155). The reception of Fazıl’s works alternated between a great deal of popularity in the nineteenth century to being suppressed at various times. 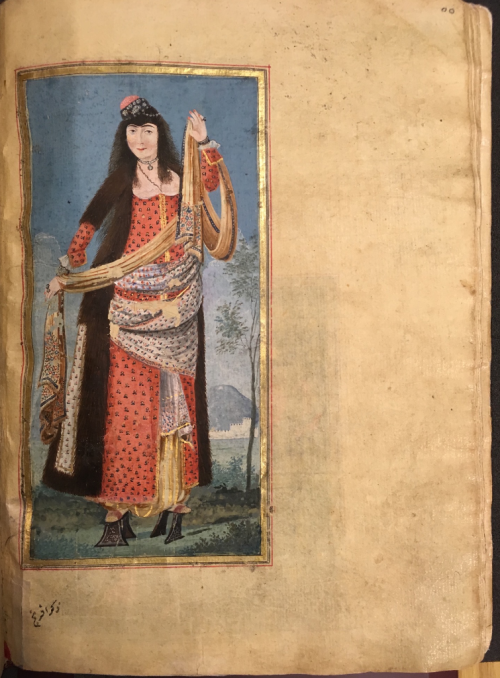 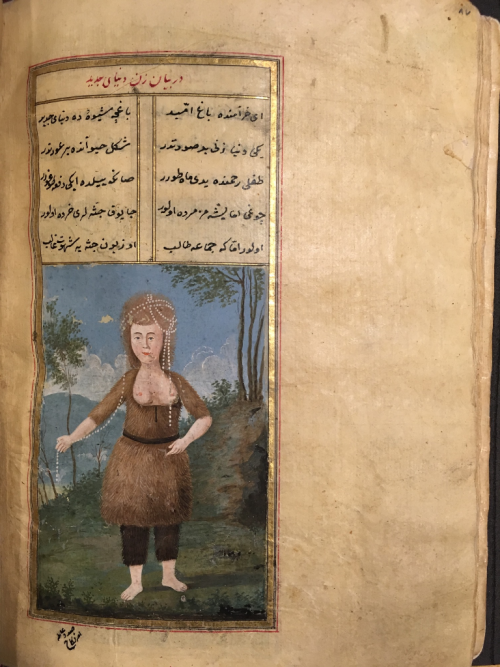 Two of the paintings that show groups of women, rather than individuals, are recognizable and they, or their counterparts in the Istanbul copy of the manuscript, have been reproduced quite frequently. Both depict people from the new bourgeois classes who are engaged in various activities in non-courtly spaces. One of these is found on f.7r and is described thus by Titley:

General view of women taking their recreation in a park. Includes one woman smoking, another on a swing, others entertained by musicians (def and fiddle players) who have a monkey. Bostanci wearing blue şalvar and a red barata. Women are wearing entaris and feraces with kuşaks and takkes. Kiosks, water and fountain in the background and a covered ox-cart. 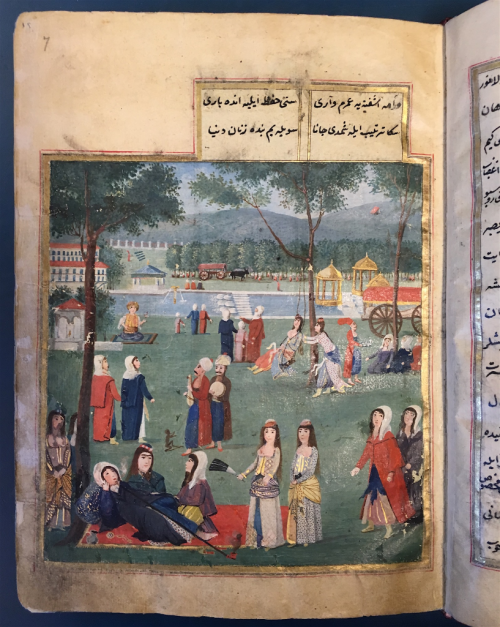 The interest in showing people of different backgrounds and classes “mixing and mingling in the private gardens of the capital” is corroborated by other paintings from this period (Artan & Schick, p.160), and especially “from the last quarter of the sixteenth century onwards, crowded picnic scenes in the countryside show men and women--including some amorous couples--enjoying food, drinks, and music” (p.161). Paintings showing women in a hamam and the male residents of a neighbourhood outside a brothel depict the activities of ordinary people. Unfortunately the hamam scene (f.49r) is now missing from this manuscript[2] but the corresponding scene in the Istanbul manuscript is reproduced quite often in published scholarly works and on the internet as a visual document of Ottoman social history. 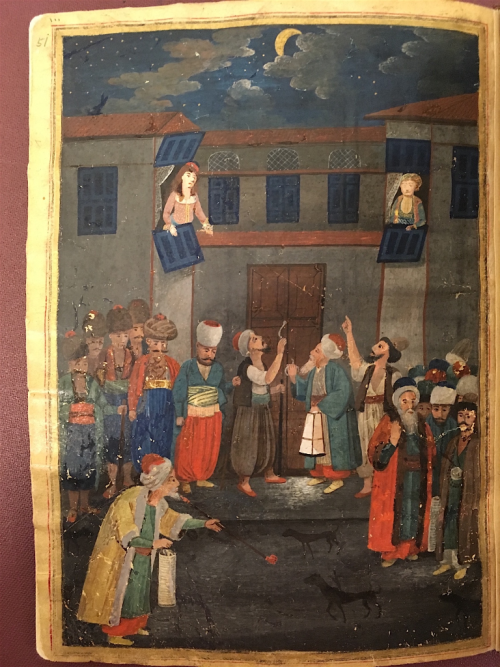 Scene outside a brothel at night. Two women looking out of windows. Seventeen men thronging the area outside, two knocking on the doors (British Library Or.7094, f.51r)

Gibb was not impressed by Fazıl’s poetic skills, but he appreciated the distinctive nature of his work in which, he wrote, “we have not only the revelation of a marked individuality, but the veritable treasury of the folk-lore of the author’s age and country” (Gibb, p.223). The paintings in this manuscript have brought attention to this text, but Fazıl’s works await a detailed study in their proper cultural and historical context. Indeed, there is no literary work quite like it in any courtly Persianate tradition.

I would like to thank Ursula Sims-Williams for her observations on the dating of this manuscript and Sooyong Kim for his insights into the text as a literary work.

Posted by Ursula Sims-Williams at 8:08 PM