A Malay work on Islamic law from Aceh: Mirat al-tullab

In the 16th century the sultanate of Aceh on the north coast of Sumatra grew to become the most powerful Muslim kingdom in Southeast Asia and a great centre for the study and teaching of Islam.  One of the most famous scholars and writers from Aceh was Abdul Rauf (‘Abd al-Ra’ūf ibn ‘Alī al-Jāwī al-Fanṣurī al-Sinkīlī), who was born at Singkel on the west coast of Sumatra in around 1615. Like many intellectuals from the Malay world, Abdul Rauf undertook the hajj pilgrimage and spent several years en route studying with a succession of teachers, first in Yemen and then in Jeddah, Mecca and Medina in the Arabian peninsula.  After nineteen years in the Middle East, in 1661 Abdul Rauf returned to Aceh during the reign of the first queen, Sultanah Tajul Alam Safiatuddin Syah (r.1641-1675), daughter of Aceh’s most famous ruler, Iskandar Muda (r.1607-1636).

Abdul Rauf composed numerous works in Malay and Arabic, including the first Malay interpretation of the Qur’an, Tarjumān al-mustafīd, based on the Tafsīr al-Jalālayn.  At the behest of Sultanah Safiatuddin Syah in 1663, he also wrote a work on jurisprudence (fiqh), comprising a guide to religious obligations in all aspects of life in accordance with Islamic law, entitled Mir’āt al-ṭullāb fī tashīl ma‘rifat al-aḥkām al-shar‘iya lil-mālik al-wahhāb, 'Mirror of the seekers of knowledge of the law of God'. Written to complement Nuruddin al-Raniri’s Ṣirāṭ al-mustaqīm, another popular Malay work on fiqh composed in Aceh in 1644 which focused solely on religious obligations, the Mir’āt al-ṭullāb covers a much broader range of topics affecting social, political and economic life, arranged in sections on commercial, matrimonial and criminal law. 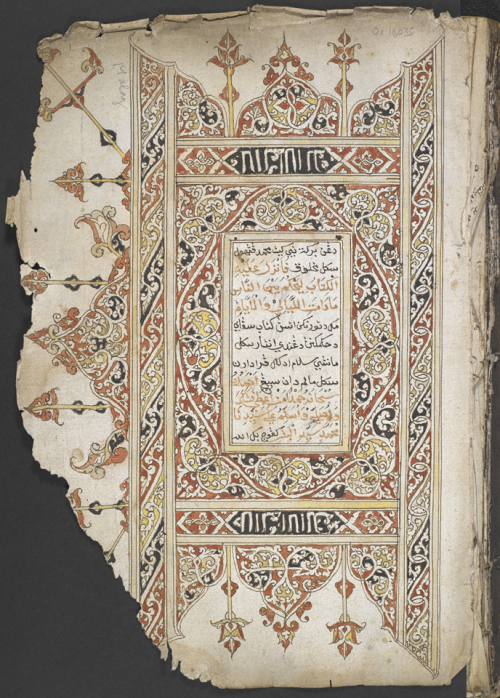 Start of the manuscript of the Mir’āt al-ṭullāb. This is the second page of the original book, as there would originally have been a first page opening to the right, with an illuminated frame mirroring the decoration on the surviving page. The illumination is typically Acehnese in style, with a palette of red, black, yellow and reserved white.  British Library, Or. 16035, f. 1r.

Although composed in Aceh, Mir’āt al-ṭullāb was influential throughout the Malay archipelago, including areas as far eastwards as Gorontalo in north Sulawesi and Mindanao.  27 manuscript copies of Mir’āt al-ṭullāb are known so far, held in libraries in Jakarta, Aceh, Kuala Lumpur, Berlin, Leiden and London (for a full list see Jelani 2015: 132-134).  The London manuscript, which is held in the British Library as Or. 16035, has now been fully digitised and can be read here. According to the colophon it was copied on 14 Muharam 1178 (14 July 1764), and from the illumination and other codicological features was clearly written in Aceh.

Traditional Malay manuscripts do not use punctuation, paragraphing, or page numbering.  Apart from rubrication – the highlighting in red ink of significant words – there are few visual aids to differentiate between the different parts of the text, and it is difficult to envisage exactly how early readers managed to navigage their way around long books.  Uniquely in some manuscripts from Aceh, though, we do find a developed system of marginalia, flagging up visually to readers the start of a new subject within the text. 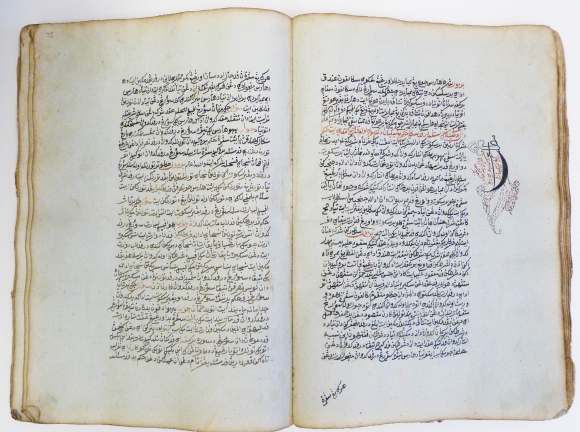 The British Library manuscript of Mir’āt al-ṭullāb contains some of the finest and most elaborate examples known of these calligraphic marginal subject indicators.  All commence with the Arabic words maṭlab baḥth, ‘section discussing […]’, written in a stylish boat-shaped flourish, orientated at an angle to the text, some of which are further decorated with typically Acehnese ornamental foliate flourishes. There are a total of 31 such maṭlab baḥth markers in this manuscript, some simply inscribed maṭlab baḥth but others include explanations in Malay on the particular type of law being discussed, as in the example shown above on f.74v: maṭlab baḥth yang seyogyanya diketahui yang qāḍī itu hukum sharikat , ‘section discussing what should be understood by judges on the law of association’.  At the start of the manuscript, from f. 8r onwards, the markers are relatively simple inscriptions.  From f. 32r onwards, they become more elaborate, and in some examples are enhanced with the use of red ink, dots and even glittery inks.

Shown below are several examples of calligraphic maṭlab baḥth subject markers from the manuscript of Mir’āt al-ṭullāb, offering us a glimpse into one of the few artistic outlets available for a Malay manuscript scribe in Aceh in the 18th century.  In the illustrations below the markers have been rotated to facilitate reading, but the hyperlinks below the images will link to the actual page of the manuscript containing the marker. 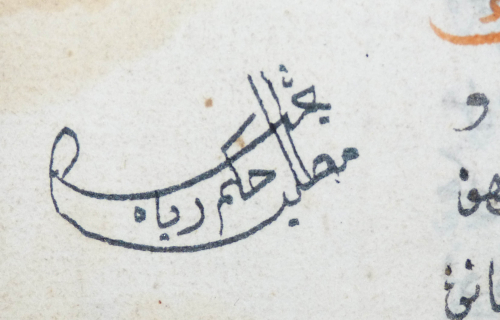 Simple subject marker at the start of the manuscript of Mir’āt al-ṭullāb  inscribed maṭlab baḥth hukum riyāh, ‘section on the law of dissemblance’.  British Library, Or.16035, f. 8r. 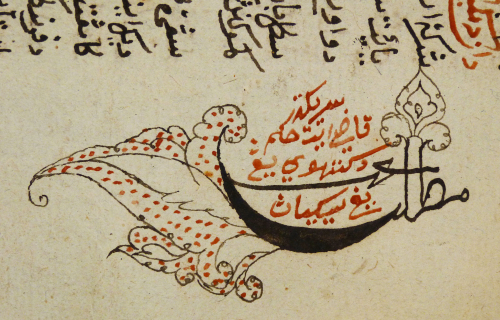 Elaborate marginal inscription reading maṭlab baḥth [in black ink] yang seyogyanya diketahui yang qāḍī itu hukum sharikat [in red ink], ‘section on that which should be understood by judges on the law of association’. British Library, Or.16035, f.74v. 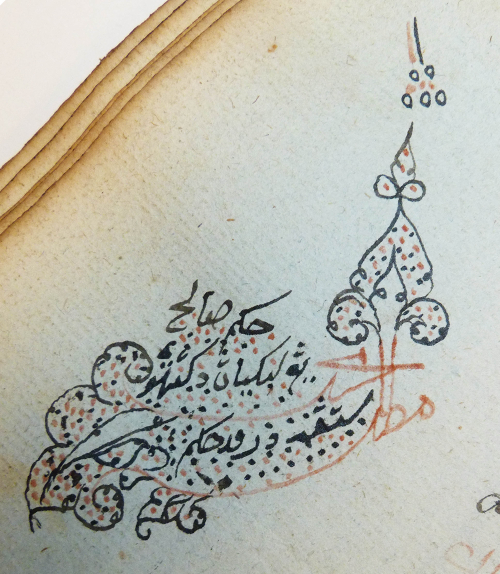 Marginal subject marker inscribed maṭlab baḥth [in red ink] setengah daripada hukum yang seyogyanya diketahui: hukum ṣuluḥ [in black ink], ‘section on one of the laws that should be known: the law of reconciliation’ (reading and translation updated 17 July 2021, with thanks to Ulil Abshar-Abdalla; the spelling of ṣuluḥ with alif is probably a scribal error).  British Library, Or.16035, f. 66r. 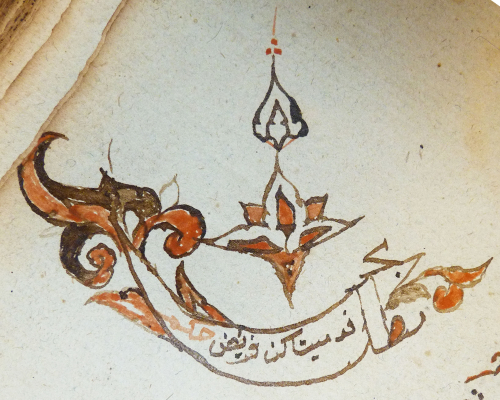 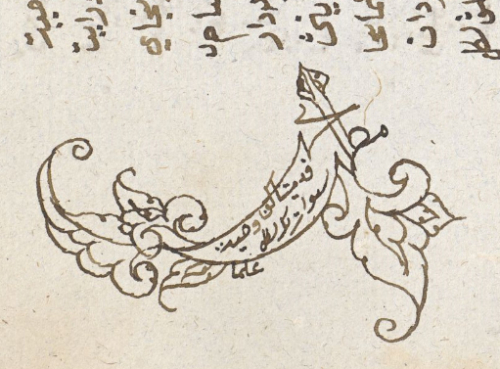 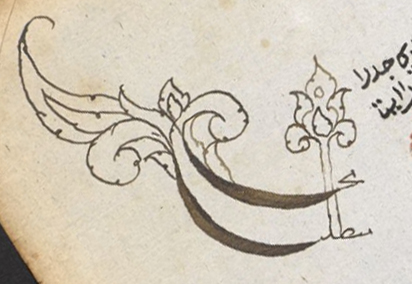 An example of a marginal marker inscribed simply maṭlab baḥth, without any further explanation of the content of the new section. British Library, Or. 16035, f. 70r.