A Rose by Any Other Name: Turkish in its Various Apparitions

For those who have learnt foreign languages, the presence of a loanword can be both comforting and surreal. In languages written in non-Roman scripts, a borrowed word – take computer as an example – greatly eases the task of building vocabulary; it is far simpler to remember the Japanese konpyutaa than the Hungarian számítógép. However, such loan-words can also be disorienting, triggering memories of one’s mother tongue while confronting it with the sight of a totally foreign representation. Now imagine that nearly every word in a text was much the same. This phenomenon is referred to as allography, and, in the period before standardized orthographies, state-sponsored schooling and the mass media, it was an exceptionally common occurrence. Among the most famous of cases are the Jewish languages of Yiddish and Ladino, but in the Ottoman Empire, where secular, state-directed education was not enforced until the 20th century, Turkish in scripts other than Arabic was a matter of routine business. 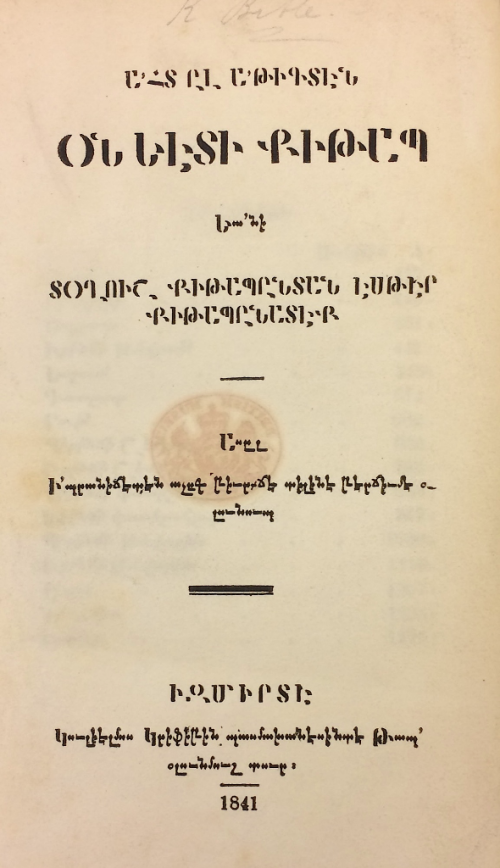 The two largest allographic communities were the Armenians and the Greeks. Armeno-Turkish – a rendering of Ottoman Turkish in Armenian letters – gave rise to a vibrant publishing industry and cultural community. The orthography was largely phonetic and based upon Western Armenian readings of the letters. It was in Armeno-Turkish that many French and other Western European works came into Turkish. This was a situation assisted by the reticence of the Sublime Porte to authorize Ottoman Turkish printing presses, despite the expansion of Armenian, Greek and Jewish ones. Many volumes printed were religious works, for example BL 14400.c.4, shown above, a copy of the Old Testament. The growth of an Armenian middle class gradually permitted the flourishing of secular publication as well, allowing for the appearance of translations, adaptations and original works. A case in point is the collection of şarkılar, or folksongs, in Armeno-Turkish shown below, BL 14499.a.14(5). That the Armeno-Turkish cultural sphere was a world in its own right is attested to by an Armeno-Turkish guide to the works of Professor Bezjian published in Aleppo in 1932, four years after the introduction of a Latin script for Turkish, and more than a decade and a half after the tragic events of 1915. 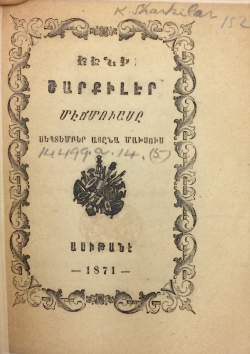 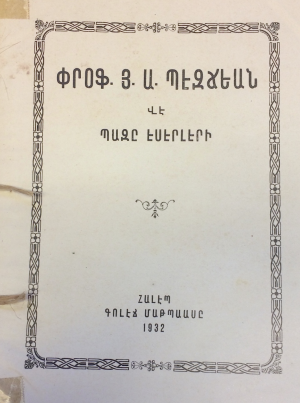 Turkish written in Greek characters also laid the foundation for a vibrant publishing industry, with a heavy emphasis on religious materials. The language, known as Karamanlidika in Greek and Karamanlıca in Turkish, was the everyday idiom of the Turkish-speaking Greek Orthodox Christians of Anatolia. Despite being ethnically and linguistically Turkish, their religion required them to be classified as Rum or Greek Orthodox under the Ottoman system. The Orthodox clergy controlled education, and a tradition of literacy in Greek letters, rather than modified Arabic script. Although many of the Library’s holdings in Karamanlidika are translations of the New Testament – usually published by British missionaries, for example BL 14400.a.28 below – there are also a few non-scriptual examples. One is a play based on the story of Abraham’s sacrifice, a story that is revered by Jews, Christians and Muslims alike (BL 14469.c.4). 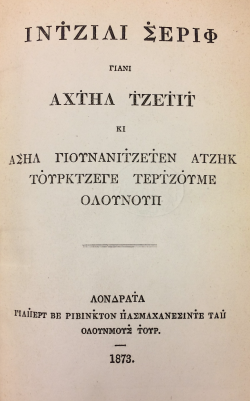 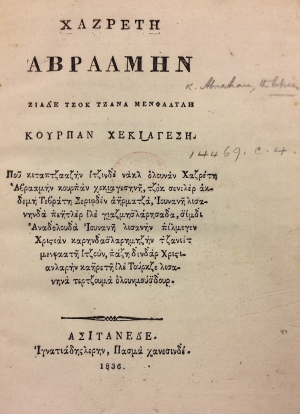 The final example of allography from the Ottoman Empire is a much less common one, but no less interesting. It is of the newspaper Leshānā d’umthā, Syriac for Voice of the Nation (BL 753.k.35). This bi-weekly was produced in Beirut, Lebanon from 1927 until 1946 and had articles in Syriac, Arabic and Turkish. Arabic written in Syriac script is a common occurrence throughout the Christian Orient, and is referred to as Garshuni. Turkish written in Syriac characters, however, is far rarer, and represents a unique view into the linguistic, political and cultural identity of Beirut’s Christian communities decades after the end of Ottoman sovereignty. Unlike Armeno-Turkish, the author of the Ottoman Turkish articles in this periodical adhered to Ottoman orthography as much as possible, even when it did not conform to the spoken language. This indicates that the compiler of the articles was educated in Ottoman Turkish, yet opted to write in Syriac script; a reminder of just how powerful the visual aspects of language were and are in the Middle East. 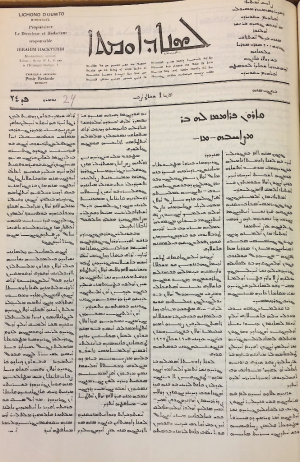 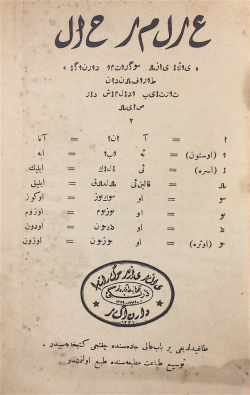 Questions of script, orthography and language were not limited to the minority communities. Indeed, perhaps the most vibrant discussions were held about the majority language itself. Ottoman intellectuals frequently debated script and grammar reforms in discussions that impinged on issues of identity, power and connectivity. The edition of the Islamic theological tract, İlm-i Hal, produced by the Society for the Teaching of a New Script in the second decade of the 20th century, exemplifies this latter push for change (BL ITA.1994.a.128). One of only three publications by the Society, it sought to reconcile orthographic efficiency with tradition by adding vowel characters to the Arabic script, some of which were based on Old Turkic runes. Like the allographies of the Armenians, Greeks and Syriac Christians, this attempt would fall victim to the drive for standardization and generalization of the new age of nations ushered in by the end of the First World War. Today these publications remain as memorials to the colourful and pluralistic cultural milieus of the age of empires.