Among the most gorgeous images in Thai manuscript painting are those of forest animals. Illustrations of the heavenly forest Himmaphan (Pali: Himavanta), which in Buddhist cosmology is thought to surround the base of the mythical Mount Meru, are unthinkable without squirrels, rabbits, birds, lions, tigers, monkeys, elephants and deer. Scenes involving birds, elephants and deer, usually against a background of trees, plants and rocks, express an atmosphere of tranquillity and peace. Deer seem to be of particular importance as they often feature in funeral books containing extracts from the Pali canon. In Thai Buddhism, symbolic meanings of deer include harmony, happiness and serenity, but also sensitivity and watchfulness. According to the Buddhist scriptures, there could have been no better place for Gautama Buddha to give his first sermon than in the tranquil landscape of the Deer Park at Sarnath. 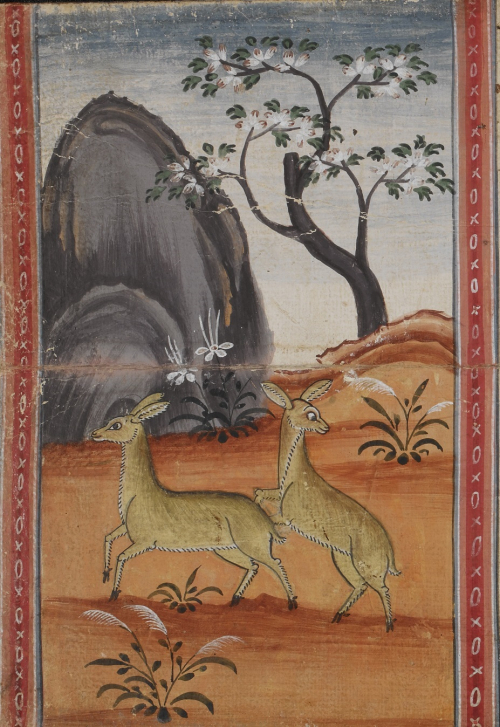 A pair of deer, one looking watchfully backward, frolicking in a rocky landscape with a blossoming tree and flowers. Illustration from a Thai folding book containing extracts from the Tipitaka in Pali language, late 18th or early 19th century. British Library, Or 14027, f.54

Some of Buddha’s Birth Stories (Jataka) also involve deer, like for example the King Banyan Deer Jataka or the Suvannasama Jataka. The King Banyan Deer Jataka tells of one of Buddha’s former incarnations as a golden deer king whose herd was captured and held in a park for the King of Benares to hunt. The king granted the golden deer immunity, but wished to hunt the other deer and eat venison meat every day. When it was the turn of a pregnant doe to be slaughtered, King Banyan Deer sacrificed himself and laid his golden neck on the butcher’s block. The King of Benares was surprised to see this and asked why the deer king offered his own life. When he heard that King Banyan Deer had taken upon himself the plight of the pregnant doe, the king prohibited hunting of deer and all other animals in his kingdom.

Scenes from the Sama Jataka in a rare 18th century folding book from Thailand. This manuscript contains short extracts from the Tipitaka, including a text on the great qualities of the Buddha (Mahabuddhaguna) which are illustrated by scenes from the Ten Birth Tales. British Library, Or 14068, f.5

A popular Jataka involving deer is part of the circle of the last Ten Birth Tales of the Buddha with the title Sama Jataka (in Thailand also known as Suvannasama Jataka). Illustrations of this Jataka can often be found in Thai funeral or commemoration volumes in folding book format containing a text on the Buddha’s great qualities, and sometimes the legend of the Buddhist saint Phra Malai. The painting style and preference of certain colours varies according to the period in which a manuscript was created. Whereas deer in 18th century illustrations usually appear static, a century later they are often shown in motion. Naturalistic scene from the Sama Jataka with deer fleeing the violent event of Sama being shot by the King of Benares. Illustration from a 19th century Thai folding book containing extracts from the Tipitaka and the legend of Phra Malai. British Library, Or 14559, f.6

The Sama Jataka tells of a son who, with great devotion, cared for his parents who had lost their sight as a result of snake bites. Every day, he fetched water from the forest. Because of his gentle, peaceful character the deer in the forest would always follow him. One day the King of Benares went hunting in the same forest and accidentally shot Sama in the chest. Realising his mistake, he went to Sama’s parents to inform them and to apologise. The parents, however, remained calm and asked him to lead them to their dead son’s body where they pleaded with the gods to restore his life, and due to his extraordinary merit he did indeed come back to life and the king was forgiven. The parents also regained their eyesight.

On the left, an illustration in an innovative, dynamic style shows Sama who was shot in the chest stumbling into the river. Two deer are by his side, the spilling water pot between them. On the right are Sama’s blind parents waiting for their son’s return from the forest. From a 19th century Thai folding book containing extracts from the Tipitaka. British Library, Or 16552, f.9

The Jataka best known Thailand is without doubt the Vessantara Jataka, the last of the Ten Birth Tales of the Buddha. This Jataka symbolises the virtue of generosity and narrates the life of prince Vessantara who from early childhood on showed a great sense of charity. He gave away all his possessions, including an elephant that he grew up with, his horses, even his children and finally his beloved wife Maddi. However, as a result of his great merits, his sacrifices and acts of generosity were always rewarded. For example, when he gave away his horses that were pulling his carriage to a forest hermitage a marvellous deer appeared immediately to replace the horses. In the end, the whole family and their animals got together again with a great celebration. 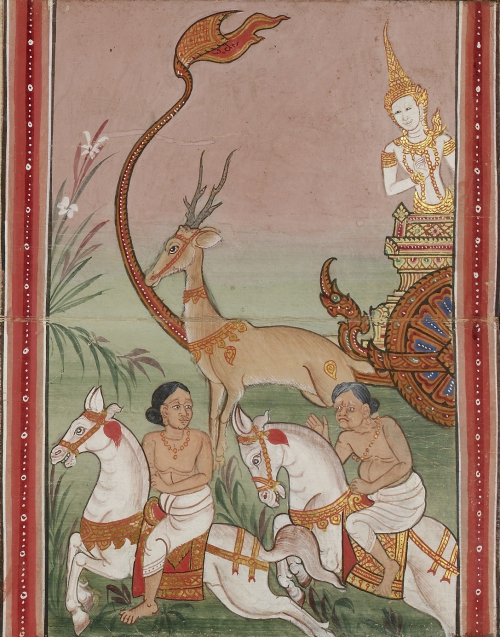 Scene from the Vessantara Jataka showing a marvellous deer with gold decorations replacing the horses that Vessantara, standing on the carriage, had given away. From a 19th century Thai folding book containing extracts from the Tipitaka. British Library, Or 16552, f.26

Not only in Thai manuscript paintings can one find images of deer, but also on manuscript covers and manuscript chests in the form of gold-on-lacquer decorations. These would usually represent scenes from the heavenly forest Himmaphan. The lavishly decorated manuscript cover below shows a deer in the centre, standing gracefully between two mythical lions and smaller forest animals, perhaps squirrels, before a delicate background of flowers and foliage.

Gilt and lacquered cover of a Thai folding book containing extracts from the Tipitaka and the legend of Phra Malai, 19th century. British Library, Or 15257, front cover

Posted by Annabel Gallop at 5:28 AM