One of the greatest periods of building in stone ever known commenced in central Java in the late 7th century, and reached a climax with the construction of Borobudur – the largest Buddhist monument in the world – in the 8th century, and the Prambanan temple complex in the 9th century. During the 10th century, for reasons that are still not entirely clear, the centre of activity shifted from central Java to east Java, where Hindu-Buddhist temples were built in stone and then brick through to the late 15th century, until halted with the spread of Islam throughout the island. Neglected and uncared for, the temples fell into disuse and thence decay, hastened by the unchecked growth of vegetation and volcanic and seismic activity.

The traditional writing material in Java was palm leaf or paper made from the beaten bark of the mulberry tree. Although if treated with great care organic materials may survive for several hundred years in the tropical climate, most of what we know about the early Javanese civilisations responsible for these great monuments is necessarily gleaned from a study of inscriptions engraved on more durable materials such as stone and copper.  The earliest known inscriptions from Java were written in Old Malay and Sanskrit, but by the 9th century Old Javanese was used. The Old Javanese language differs from modern Javanese in the very high proportion of Sanskrit words, while Old Javanese script, sometimes known as Kawi script, also differs from that used for modern Javanese. The earliest dated inscription in Old Javanese is the Sukabumi inscription of 804 AD, and Old Javanese continued to be used until the 15th century.  Hundreds of inscriptions survive, engraved on stone and copper. Some of the copper charters are later copies of earlier inscriptions, or more portable copies of inscriptions originally engraved on stone. 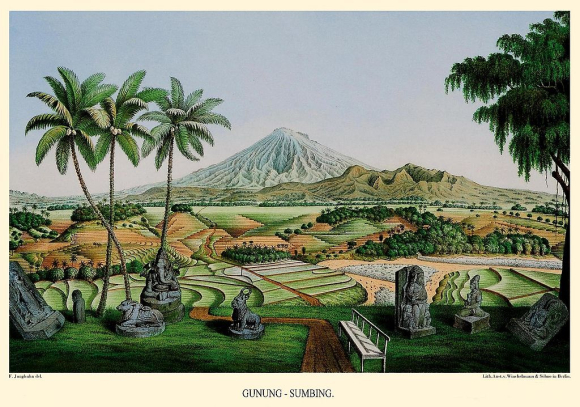 Mount Sumbing, a volcano in central Java, shown with a selection of Javanese antiquities in the foreground. From the Java-Album by Franz Wilhelm Junghuhn (1809-1864). Leipzig: Arnoldische Buchhandlung, 1856. British Library, 1781.a.21, Plate 5.

The British Library holds three separate copper charters in Old Javanese, all of which have now been digitised.  The two charters held as Ind. Ch. 57, both incomplete, relate to a man named Ugra in a village called Pabuharan. Although undated, there are textual indications that these charters may date from the 9th century. The plate which can properly be termed the ‘Pabuharan inscription’ (Prasasti Pabuharan), Ind. Ch. 57 (B), records a grant of the attributes of the Brahman-order and Kṣatriya-order by the king to Ugra's children named Dyah Kataywat and Dyah Nariyama in the domain (sima) of Pabuharan.  On this occasion several ceremonial gifts of cloth and gold were presented to various officials, and are listed in the inscription.

The accompanying plate, Ind Ch 57 (A), records the making of a canal in the lěmah asinan of Pabuharan by Ugra, who is described as a a teacher, with some rights and regulations to be maintained for it.

Both plates were in the possession of Sir Thomas Stamford Raffles, Lieutenant-Governor of Java from 1811 to 1816, but there is no information on how Raffles acquired them in Java. The plates were originally held in the British Museum before being transferred to the British Library.

The third charter was issued by King Siṇḍok, who reigned in Java from ca. 929 to 947, and it was probably during his reign that the main shift from central to east Java took place. Known as the Sobhāmṛta inscription (Prasasti Sobhāmṛta), the complete charter consists of seven plates, of which the first and third plates are held in the National Museum of World Cultures in Leiden, while the five remaining plates are held in the British Library as MSS Jav 106.  On the basis of the style of script, this is clearly a copy made sometime between the late 13th and 15th centuries of the original charter.  The inscription records that on 11 Suklapaksa in the month Waisakha 861 Saka ( 2 May 939 AD), the king – named in the text as Sri Maharaja Rake Hino Mpu Sindok Sri Isanawijaya Dharmottunggadewa – gave orders that rice fields, orchards, and house lands in Sobhāmṛta were to become a freehold area, in return for the duty of maintaining a temple.  The charter was discovered in 1815 in a village south of Surabaya in East Java during work on a water supply.  The name of this village was Betra, which could possibly be a corrupt version of the Sanskrit name Sobhāmṛta, meaning ‘splendid holy water’, from nine centuries earlier.

The last plate ends with a series of decorative motifs marking the end of the text, including two floral motifs probably derived from the lotus blossom.

Posted by Annabel Gallop at 9:01 AM