To celebrate Christmas we bring you a selection of images from some of our Ethiopic manuscripts. 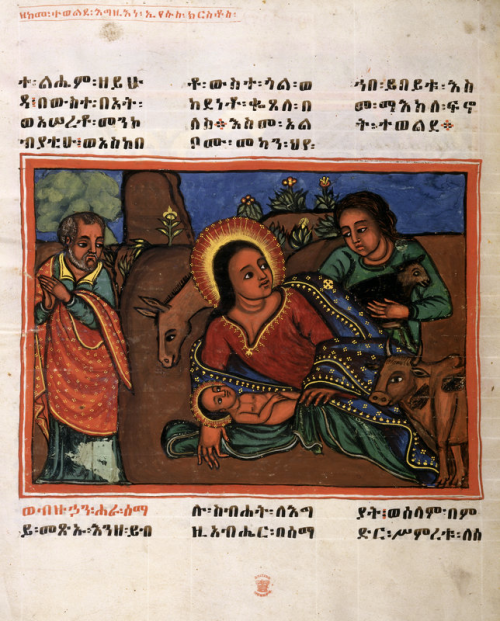 The Nativity. The Virgin Mary and the Baby Jesus in a manger, with Joseph. From the Nagara Māryām, the history and miracles of the Blessed Virgin Mary, 18th century (British Library Or. 607, f.13v)

The Ethiopic collections in the British Library include about 600 manuscripts which were acquired  from the mid-eighteenth century onwards. The collection is strong in illuminated manuscripts of the 16th and 17th centuries and also contains, in addition to biblical texts, an important collection of Ethiopian magical and divinatory scrolls. Several catalogues have been published, the details of which are given below. Or. 481, written in a small elegant character on vellum, dates from the second half of the seventeenth century. It contains the first eight books of the Old Testament (the Octateuch), the four Gospels,  numerous short works on church order, canons of  Ecumenical Councils and other ecclesiastical works. It is decorated with coloured borders and contains many illustrations. 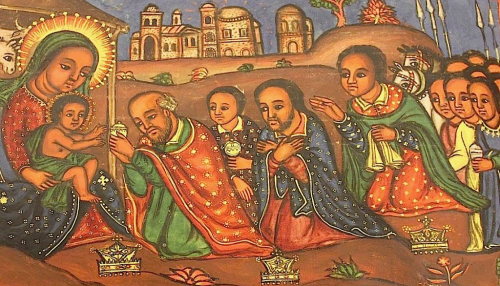 Three Wise Men or  Magi, as described in The Gospel according to St. Matthew (British Library Or. 607, f.14v)

This illustrated manuscript, Or. 607, is a copy of Nagara Māryām ነገር ማርያም, the history and miracles of the Blessed Virgin Mary. It is arranged for the twelve months of the year, and is also popularly known as the Gospel of the Mother or 'called in the Egyptian tongue the Little Gospel'. Written on vellum it was copied for ʼĪyāsū II of Ethiopia who ruled from 1730 to 1755. 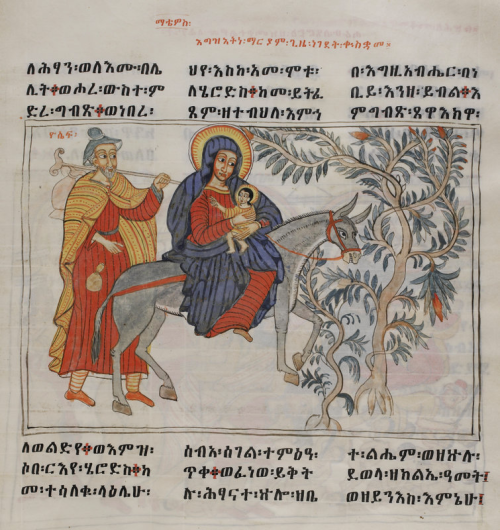 The flight into Egypt: Mary and Jesus followed by Joseph (British Library Or. 510, f.10r)

Our third manuscript, Or. 510, beautifully written on vellum in three columns, dates from 1664-65 and was copied in Gondar, Ethiopia, for King John I, ʼAʼlaf Sagad, and his queen, Sabla Wangēl. The manuscript as a whole demonstrates the use of European models for the illustrations which were inspired by those of A. Tempesta, based on Dūrer, in the Arabic Gospels published in Rome in 1590-91. In the process of copying, perspective was eliminated and the presentation simplified.

Posted by Ursula Sims-Williams at 1:05 PM