The collection of Malay manuscripts formed by the Scottish poet and scholar of Oriental languages John Leyden (1775-1811), now held in the British Library, is an exceptionally important resource for Malay literature. Leyden spent four months in Penang from late 1805 to early 1806, staying in the house of Thomas Stamford Raffles, initiating a deep friendship which lasted until Leyden’s early death in Batavia in 1811. The 25 volumes of Malay manuscripts in the Leyden collection contain 33 literary works, comprising 28 hikayat in prose and five syair in narrative verse, with some titles existing in multiple copies. Nearly all the manuscripts come from the environs of Kedah, Perlis and Penang and were collected by Leyden or Raffles, while a few were copied in Melaka, where Raffles was stationed in 1811 and where Leyden spent some weeks en route to Batavia. 24 of the works are dated to between 1802 and 1808, and over ten names of scribes are found in the colophons. The collection thus affords a remarkable snapshot of literary activity along the northwest coast of the Malay peninsula in the first decade of the 19th century. 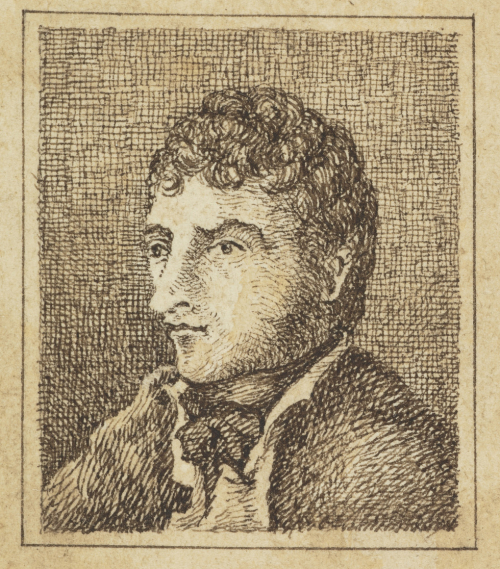 Some of the Malay works in Leyden’s collection are found in multiple copies and versions all over the Malay archipelago.  For example, manuscripts of the Hikayat Pelanduk Jenaka date back to the 17th century, and there are three copies in Leyden's own collection. Hikayat Dewa Mandu is known from at least 14 other Malay manuscripts from the peninsula, Sumatra and Java, and is also found in Cham regions in present-day Cambodia and Vietnam, where it is known as Akayet Deva Mano. Other texts are less familiar: Leyden’s copy of Hikayat Raja Dewa Maharupa is the only manuscripts known of this work, while his copy of Hikayat Silindung Dalima is the only prose copy known of this work usually encountered as a syair.  Hikayat Ular Nangkawang is a text only known from two manuscripts, both in the British Library: one from Leyden, and another from John Crawfurd's collection (Add 12382). [This note added 31.1.2021.] 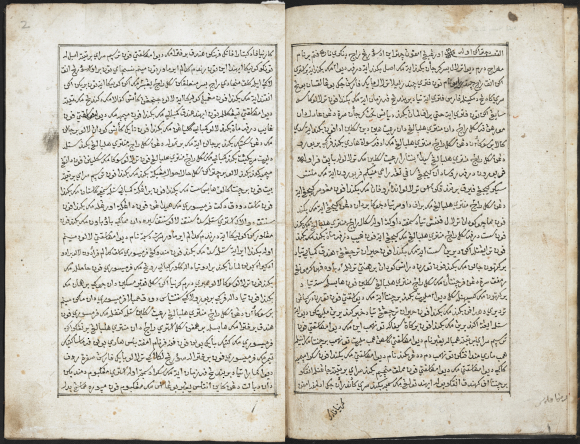 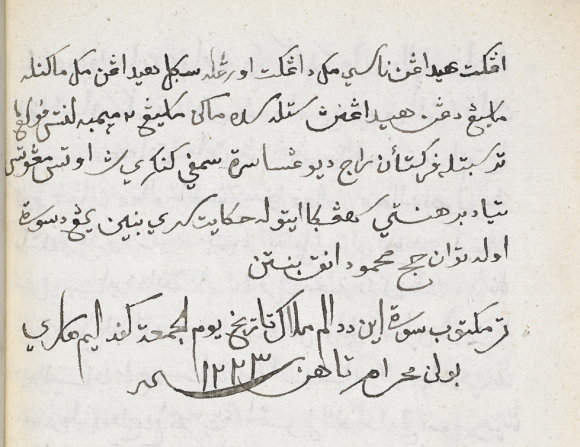 Colophon of the Hikayat Silindung Dalima, copied in Melaka on 5 Muharam 1223 (3 March 1808). The name of the scribe is given as Tuan Haji Mahmud from Bintan or Banten (b.n.t.n), but this may be the name of the scribe of the original MS from which this copy was made. British Library, MSS Malay C 6, f. 65v

Five of the manuscripts in the John Leyden collection are copies commissioned by Raffles, as stated clearly in the colophon, but most of the others appear to be ‘working’ manuscripts created for a Malay audience and used within that community, as can be gauged by well-thumbed and smudged pages, and reading marks throughout the text. Paper was clearly a valuable commodity: in most of the manuscripts the text is written densely across the full surface of the page, with no extraneous embellishment. On two pages of Hikayat Dewa Mandu, the scribe has taken the decision that ink scribbles should not hinder the continued usage of the paper, and he has annotated the top of the page: ini surat dipakai tiada salah, 'this page has been used, there is essentially nothing wrong with it' (MSS Malay D.1, ff. 37r, 39r). 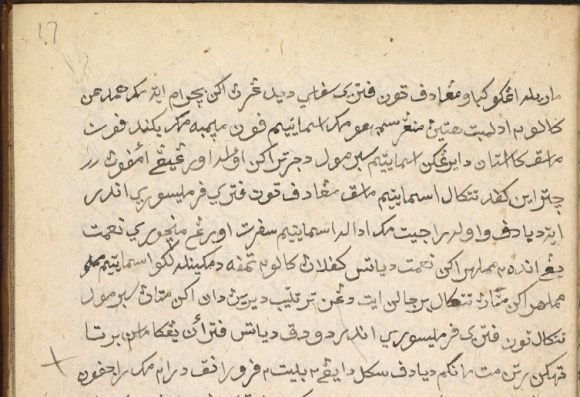 Part of a page of Hikayat Isma Yatim, early 19th c., with an 'x' in the margin probably indicating the place reached by a reader.  The two '//' marks at the end of the third line have been used by the scribe as a 'filler' to ensure a neat right-hand edge to the text block. British Library, MSS Malay C 4, f. 17r (detail) 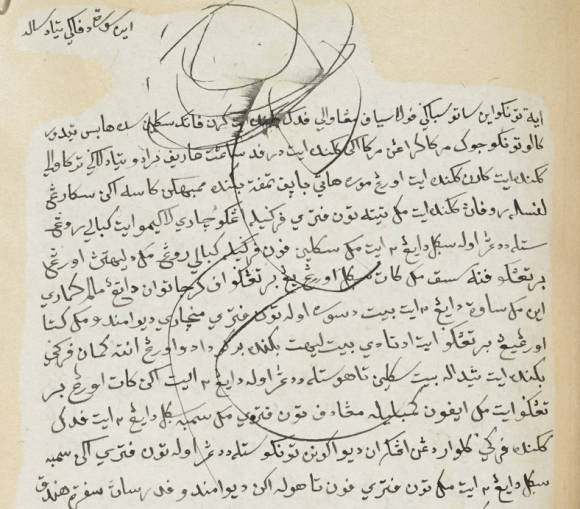 Page from Hikayat Dewa Mandu, copied in 1808, which the scribe decided to use despite the ink scribbles on the paper, writing at the top ini surat dipakai tiada salah. British Library, MSS Malay D 1, f. 37r (detail)

On the initial page of Hikayat Ular Nangkawang, the scribe has practised writing out the basmala and the heading for the opening of the Qur'an, with the words Sūrat al-Fātiḥah al-Kitāb sab‘ah āyāt, ‘The Chapter of the Opening of the Book, six verses’.  Recent research by Ali Akbar (2015: 317) has shown that the headings Sūrat al-Fātiḥah al-Kitāb or Sūrat Fātiḥah al-Kitāb for the first chapter of the Qur'an are strongly associated with Ottoman Qur'an manuscripts, and in Southeast Asia are only encountered in Qur'an manuscripts from the east coast of the Malay peninsula, in the Terengganu-Patani cultural zone. In Qur'ans from all other parts of the Malay world, such as Aceh, Java and Sulawesi, the chapter heading is presented simply as Sūrat al-Fātiḥah.  This suggests that the scribe of Hikayat Ular Nangkawang was familiar with this Ottoman practice, perhaps through its manifestation in Qur'an manuscripts from the east coast of peninsula, which were exported to many other parts of the Malay world.

All the Malay literary manuscripts in the John Leyden collection have now been fully digitised and are accessible through the British Library's Digitised Manuscripts website or via the Malay Manuscripts project page, or directly from the hyperlinks below:

Posted by Annabel Gallop at 6:37 PM