The curious tale of Solomon and the Phoenix

One of the more enigmatic manuscripts now in the British Library (IO Islamic 1255) from the rich library of Tipu Sultan, ruler of Mysore (d. 1213/1799), is the untitled qiṣṣah or tale featuring a figure popular across the range of Persian literature, the Prophet Sulaymān (the biblical Solomon, son of David). In this tale, the prophet-king is confronted by the head of the ranks of birds, the Sīmurgh (Phoenix), expressing its disbelief in the doctrine of predestination (qaz̤āʾ va qadr). Having angered Allāh, Jibrāʾīl (the archangel Gabriel) is sent to inform Sulaymān of a prophecy foretelling the birth of the Prince of the East (Malikzādah-′i Mashriq) and the Princess of the West, daughter of the Malik-i Maghrib, who together bear a child out of wedlock. The Sīmurgh believes it can prevent this outcome. Sulaymān and the Sīmurgh conclude an agreement (qawl) to reassess the situation after fifteen years, by which time the accuracy of the prophecy would be apparent. 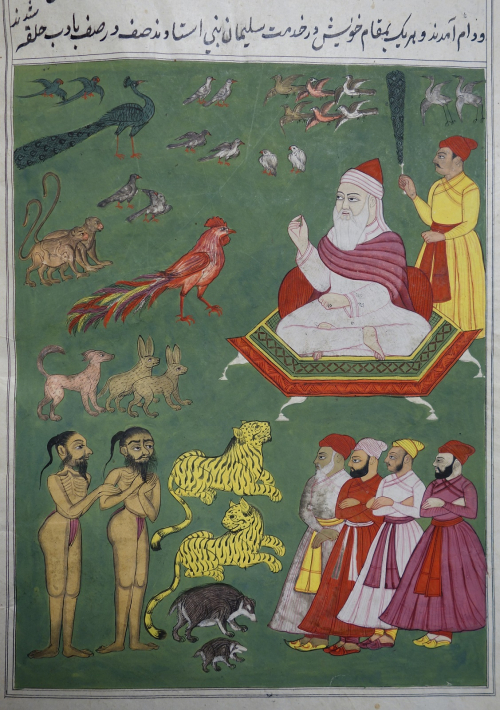 The tale additionally interweaves several digressive subplots focussing on the adventures of the Prince of the East from his minority to adolescence. In the process, his development into a pious youth is mapped through a succession of episodes where he interacts with magical beasts, Satan, kings, courtiers, merchants, and sages. This didactic tale may be part of the ‘mirror for princes’ tradition, but as we shall later discover, there is more to it than appears at first glance. 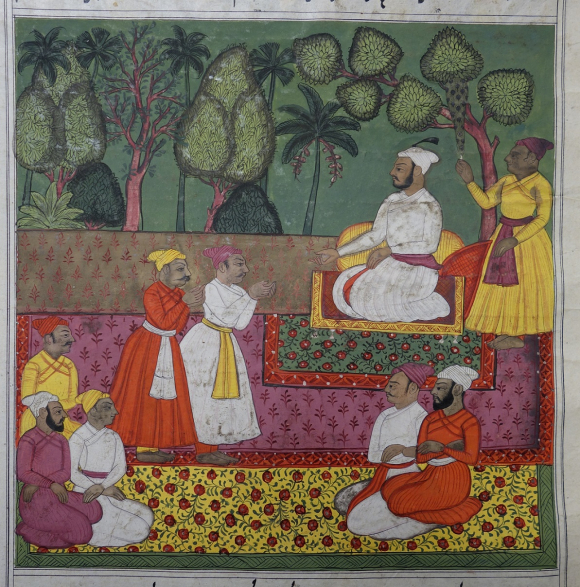 The Prince of the East (not shown) overhears a king’s angry exchanges with his courtiers while seated amid special trees. Note the lengthy jamahs and sweeping turbans that indicate eighteenth-century courtly fashions, while the patterned floorcoverings attempt to capture the rich texture of contemporary embroidered and brocaded soft furnishings. Untitled tale of Solomon and the Phoenix from the Tipu Library. British Library, IO Islamic 1255, f. 8r.

Profusely illustrated, the manuscript IO Islamic 1255 has surprisingly eluded scholarly attention. Although it ends without a dated colophon, the distinctive style and details of its 63 illustrations on 26 folios offer sufficient evidence to locate its origins in mid-eighteenth-century Deccan, possibly even the Carnatic, ruled by the Nawabs of Arcot. On the other hand, the coarse nastaʿlīq script tending toward taʿlīq makes it clear that this is not the product of an élite or royal workshop. The absence of gold illumination and the use of a muted colour palette further strengthen this impression. The unusually tall and narrow format underscores the peculiarity of the volume as a whole. Though the paintings have oxidised in areas, the manuscript must have been a valued item in Tipu’s library, as the work was bound in a contemporary finely-tooled, gilded, and painted leather binding. 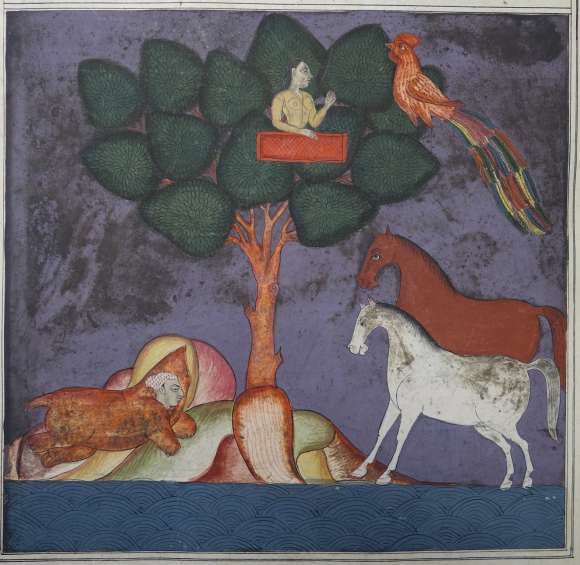 The Prince of the East is discovered by his two Arabian horses while sheltering under the hide of a horse at the foot an isolated tree. This image shows the increased levels of pigment oxidation in paintings towards the end of the manuscript. Untitled tale of Solomon and the Phoenix from the Tipu Library, British Library, IO Islamic 1255, f. 22r.

The tale’s literary significance is heightened when considering the version in another British Library manuscript catalogued recently, entitled Qiṣṣah-′i qaz̤āʾ va qadr (IO Islamic 4806). We encounter the familiar characters of the Prophet Sulaymān, the Sīmurgh, the Prince of the East and Princess of the West, with the narrative sharing the same basic structure. Like the version in the Tipu manuscript, the tale’s author is not named. Differences lie in the laconic style of the substantially abridged account, with some passages and episodes rearranged, and others omitted. Occasionally, the simplicity of prose is abandoned in favour of a more formal style and additional poems, while adjectives and titles take on a distinctly courtly flavour. Notwithstanding, the overall feel is that of a relatively faithful retelling of the Tipu version.

The most original feature of the Qiṣṣah-′i qaz̤āʾ va qadr is its introductory matter (ff. 1v-3r), which elevates it to the status of pseudo-history and prophetic tradition. Accordingly, when the Prophet Muḥammad was troubled by Meccan groups, Jibrāʾīl appears and gives him the seal of Sulaymān, a gift from Allāh. Jibrāʾīl is asked if it prevents death. He clarifies that there are two kinds of death, qaz̤ā-′i muḥkam or conspicuous (avoidable?) death and qaz̤ā-′i mubram or certain death. After a few days, Jibrāʾīl reappears and narrates the tale of Sulaymān and the Sīmurgh to demonstrate how nothing escapes the certainty of fate. The tale begins from this point forward in much the same way as the Tipu manuscript.

The tale’s connection with the Prophet Muḥammad is established on the authority of a tenuous chain of transmission, mentioning the names of Ibn Saʿd (d. ca. 66/686), who heard it from Ḥasan Baṣrī (d. 110/728), who heard it from one of the unidentified muʿtamadān or confidants of the Prophet. Whether or not the chain of transmission is authentic, such details are unnecessary for the purpose of a mere adventure tale, indicating the intention to emphasise its moral and pious message. While subsequent details correspond closely with the Tipu manuscript, these extraordinary passages do not appear in that version.

The Qiṣṣah-′i qaz̤āʾ va qadr manuscript is not dated and owners’ marks have been erased. It consists of 26 folios commencing with a gilded and painted sarlawḥ or headpiece, and has gold rulings throughout, with scribal nastaʿlīq on thin burnished paper. The nine brightly coloured illustrations are painted with sparsely populated simplistic compositions. Only the King of the West and the Prince of the East are depicted wearing Persian (Safavid) costume, while the remaining characters are dressed in eighteenth-century Hindustani attire. Neither manuscript has chapter or section headings, making it difficult to follow the programme of illustration in both manuscripts without closely reading adjacent text. A comparative list of illustrations in both manuscripts can be found here: Download Solomon and the Phoenix illustrations. 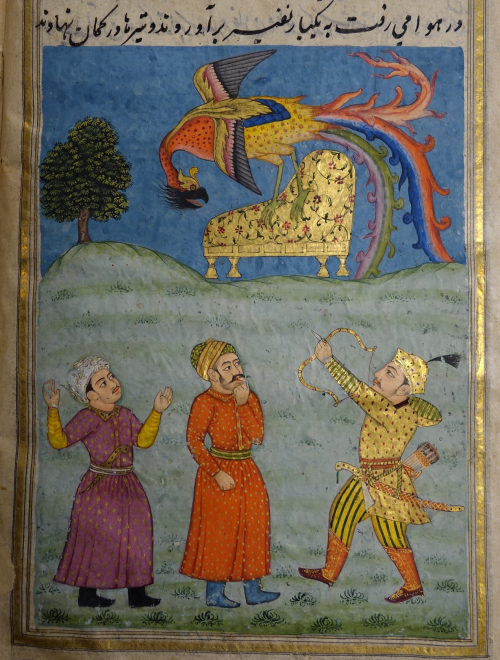 The King of the West’s men shoot at the Phoenix stealing the Princess’s cradle. Note the differentiation in status between figures reflected in their costume. Qiṣṣah-′i qaz̤āʾ va qadr, British Library, IO Islamic 4806, f. 3v. 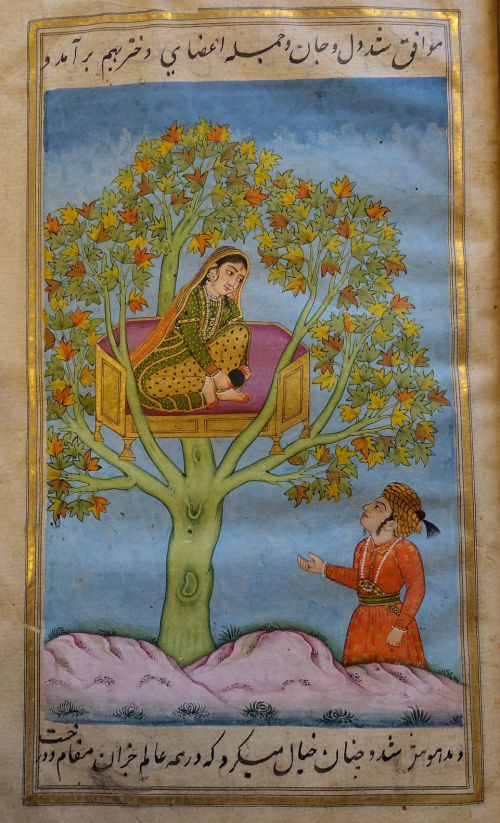 The Princess of the West falls in love with the Prince of the East, who finds his way to the foot of the isolated tree where she is held captive by the Phoenix. The Princess here is dressed in the Hindustani peshvaz and dupattah, while the Prince sports a turban in a distinctly Safavid style with the ends of the qamarband always tucked in. Qiṣṣah-′i qaz̤āʾ va qadr, British Library, IO Islamic 4806, f. 19r.

Given that both manuscripts discussed here are associated with South Asia, one might be forgiven for taking this as an indication of the tale’s origins, perhaps traceable to some obscure Sufi source of moralistic parables. Evidence to counter this regional association is found in a fragile Judaeo-Persian manuscript from the British Library’s Gaster Collection (Or 10195). Although the fragmentary volume has several compositions in poetry and prose, one of these comprises yet another prose rendition of the same tale of Sulaymān and the Sīmurgh. While the work needs to be studied in detail, it would be particularly revealing if it could be verified that this version commences with or without the prophetic tradition, and whether it consists of the lengthier or abridged version. The systematic comparison of all texts may form the basis of future research to identify a common Urtext, which might not even be in Persian at all. It is hoped this article may mark the start of the process.

Bibliographical note on IO Islamic 1255
Charles Stewart, A Descriptive Catalogue of the Oriental Library of the Late Tippoo Sultan of Mysore, Cambridge, 1809, p. 84, where it is listed as the third of the Persian fables. Hermann Ethé, Catalogue of Persian Manuscripts in the Library of the India Office, Oxford, 1903, vol. 1, coll. 544, no. 854. Another undated manuscript (IO Islamic 1627), also from Tipu Sultan’s library, reproduces over ff. 106v-111v an independent work based on a fragment of the same tale comprising episodes 14-28 (Ethé, no. 853).

Acknowledgements
I am grateful to Ursula Sims-Williams for referring me to IO Islamic 1255. I would also like to thank Ilana Tahan and Zsofia Buda for their research and help with Judeo-Persian.

Posted by Annabel Gallop at 6:53 AM