The Seal of Prophethood: Malay prayers for protection

Malay manuscripts are generally written in conventional ‘book’ form, but a few scrolls are also encountered. Malay manuscript scrolls are primarily associated with sermons, to be read in the congregational mosque at the Friday prayers, but occasionally small scrolls are found containing prayers and amulets which appear to have been compiled by individuals for their own personal use and protection. The British Library holds one such Malay scroll (Or. 16875), which contains a variety of prayers and talismanic symbols in Arabic, with explanations in Malay about their efficacy and directions for use. The scroll, which measures nearly three metres long when unrolled, is very finely written in black and purple ink. The manuscript has been fully digitised and can be read by clicking on the hyperlinks below the images. 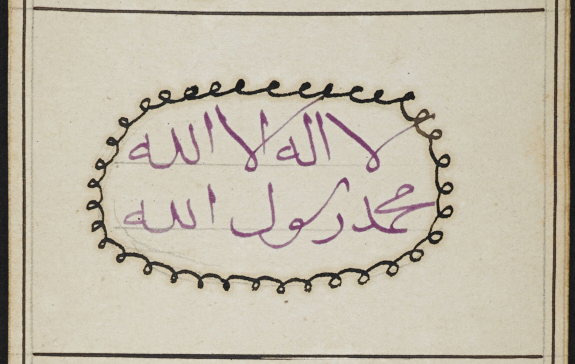 Decorative presentation of the shahadah, ‘There is no god but God, Muhammad is the messenger of God’, from a Malay prayer scroll. British Library, Or. 16875

The main contents of the scroll is a series of depictions of the ‘Seal of Prophethood’ (in Persian muhr-i nubuvvat, in Arabic khātam al-nubuwwah, and in Malay mohor nubuat). The Seal refers to a special mark borne by Muhammad described by all who knew him as a type of mole or fleshy protruberance located between his shoulder blades (Savage-Smith 1997: 1.106). All over the Islamic world, manuscripts are known depicting the Seal of Prophethood, usually in the form of circular diagrams containing prayers or letters and numbers believed to have magical significance, which acted as talismans whose protective power could be activated by gazing upon them.

The Malay prayer scroll Or. 16875 contains seven diagrams of the ‘Seal of Prophethood’, each said to be found on a different part of Muhammad’s body, and each carrying different protective powers if viewed morning and evening, or written on a piece of paper and carried around. Gazing on the Seal on the Prophet's forehead (dahi) will ensure such success in business that it will feel like entering heaven (pelaris segala jualan seperti masuk syurga); that on his face (muka) will bring happiness (kesukaan); that on his left side (lambung kiri) will bring honour and long life; gazing at that on his right [side] (kanan) is a service (khidmat) to the Prophet and will be rewarded with God's safekeeping; and carrying an amulet (azimat) of the Seal on his mouth (mulut) will ensure that kings and great men will grant the bearer's request. Show below is the Seal of Prophethood said to found on Muhammad’s cheek: ‘This is the Seal of Prophethood on the cheek of the messenger of God, peace and blessings be upon him, according to ‘Abd al-Raḥman, may God be pleased with him, whoever looks upon this [mark of] Prophethood, his sins will be forgiven by God the Glorious and Exalted, or whoever writes it down and takes it to war will be safe wherever he goes, and whatever he wishes for will be granted by God, it will not be denied to him through the grace of God the Glorious and Exalted’ (Ini mohor al-nubuat pada pipi rasul Allāh ṣallā Allāh ‘alayhi wa-sallam, cetera daripada ‘Abd al-Raḥman raḍī Allāh ‘anhu, barang siapa melihat dia nubuat ini diampun Allāh subḥānahu wa-ta‘ālā sekalian dosanya atau disurat bawa berperang barang ke mana perginya selamat dengan barang hajatnya dikabulkan Allāh tiada tertolak orang itu dengan berkat kurnia Allāh subḥānahu wa-ta‘ālā akan dia).

The circular diagram depicts the Seal of Prophethood said to be on the cheek of the prophet. In the centre is the name of God, and in the border are the names of the four first Caliphs of Islam. British Library, Or. 16875

The scroll also contains a series of repeated esoteric letters and formulae said to be associated with early figures of Islam, including the Prophet, his grandsons Hasan and Husayn, his uncle Hamzah, Husayn’s son Zayn al-‘Abidin, and the prophets Sulayman, Yaqub and Adam. Each sequence is introduced by the phrase bab ini pakaian, ‘these are the letters used by’, followed by the appropriate name.

The letters associated with the Prophet Sulaymān (Solomon). British Library, Or. 16875

The scroll also contains a few magical symbols which are often encountered in Malay manuscripts. These include the five-pointed star, the pentagram, which can be ‘strengthened’ further by the addition of loops or 'lunettes' to its tips, and the angka sangga Siti Fatimah (seen below), which in another Malay manuscript in believed to have the power to make a thief return an item he had stolen to the rightful owner (Farouk 2016: 198). 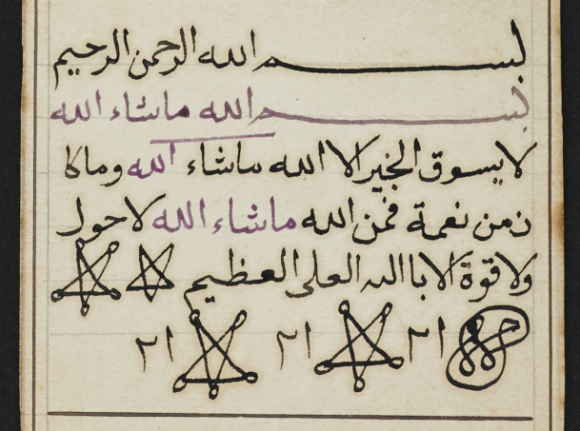 Magical signs include the pentagram, with looped tips or 'lunettes', and in the lower right corner the angka sangga Siti Fatimah. British Library, Or. 16875

In the writing of Islamic talismans, it is believed that letters will exert a greater power if they are written in certain ways. Thus diacritical dots are often missing, in emulation of the antique angular script. A particularly notable feature is a preference for the stretched-out form of the letter kaf, as can be seen to very striking effect in the amulet below. 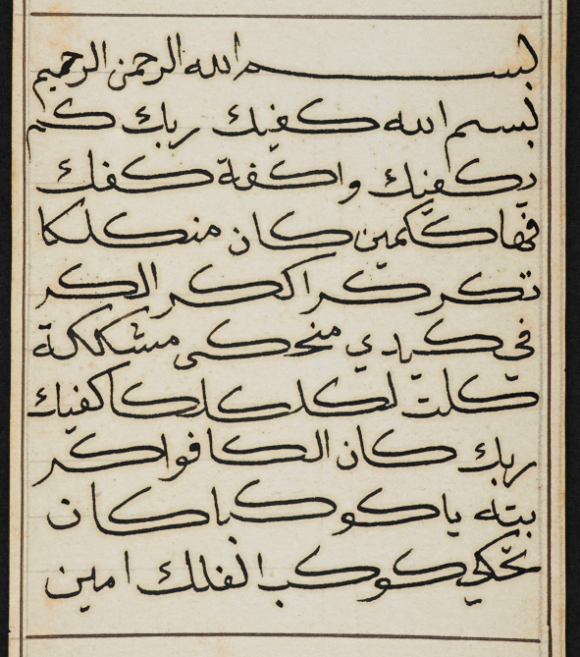 Horizontally elongated kaf, believe to enhance efficacy of this prayer. British Library, Or. 16875

The scroll ends with a Qur’anic verse (Q. 61:13) very often found in amulets, ‘Help from God and a speedy victory, so give the Glad Tidings to the Believers.’ The Malay language is used in all parts of maritime Southeast Asia, and as there is no information on the scribe, date or place of writing of this scroll, or any evident linguistic localisms, it is very difficult to ascertain where it comes from. A very cautious guess, based partly on the use of purple ink, suggests a possible origin from the Malay peninsula in the late 19th or early 20th century.

The manuscript was photographed in the British Library by senior photographer Elizabeth Hunter, who in addition to detailed images of each section, also managed to capture the entire scroll – measuring 2850 x 80 mm, made up of five piece of paper glued together – in a single shot. British Library, Or. 16875

Posted by Annabel Gallop at 3:59 AM