The Year of the Rooster, from a Thai perspective

According to the Chinese luni-solar calendar, the Year of the Rooster (or Chicken) begins on the 28th January 2017. It falls on the day of the new moon halfway between the winter solstice and the spring equinox.  A variety of calendrical systems has traditionally been used in Thailand, one of them being the Chinese calendar, together with the Chinese zodiac system. The Thai people have adapted the Chinese zodiac symbols in accordance with their own purposes and ideas, still following the principle of the twelve-year lunar cycle with each year represented by an animal, except with the Chinese dragon replaced by a Buddhist nāga (serpent). The completion of a twelve-year cycle was and is important for Thais as a reminder of their birth year and as a means to calculate their age. The zodiac is also often used for forecasting horoscopes, match making and fortune telling. 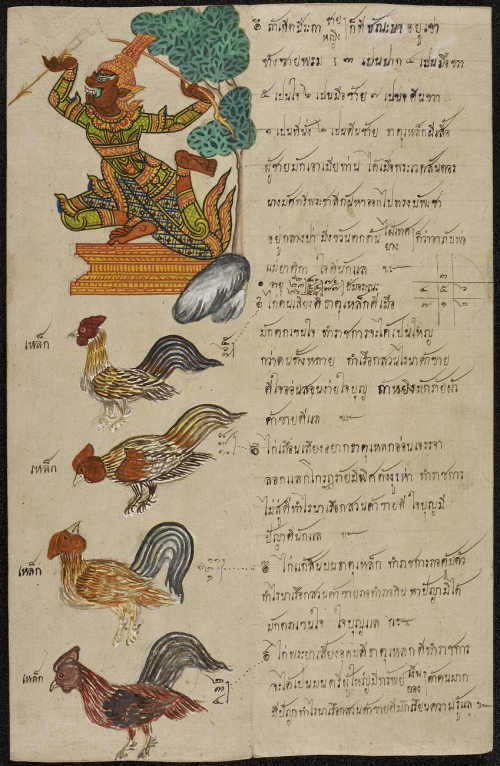 Page of a Thai Phrommachāt manuscript dealing with predictions for people born in the Year of the Rooster. Dated 1885 A.D. British Library, Or.3593, f.14

The twelve animals of the Thai zodiac are called sipsǭng rāsī and it is believed that a person's fate can be determined by the position of the major planets at the time and date of a person's birth, along with the positions of the moon and the sun. Thai manuscripts dealing with the Thai zodiac and divination or fortune telling, usually in paper folding book format, are called Phrommachāt. They are usually illustrated with four images of each of the twelve animals, which are combined with alternating male and female “avatars” of the birthplace (chātphūm) and number diagrams. Each animal is also associated with an element (metal, wood, water, fire, earth) and a particular plant in which the khwan (soul) lives. The features and colours of the characters and their costumes depicted in the paintings are mostly in the unique Thai painting style of the Rattanakosin period, but some older versions and local variations exist as well. 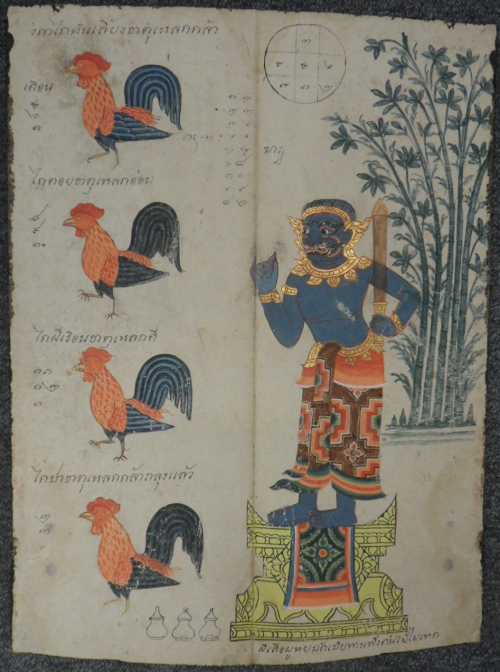 Four roosters, each representing one quarter of a year, with a male giant (yaksa) as “avatar” of the birthplace with a unique waist cloth, a plant and a number diagram determining the lucky and unlucky numbers for people born in the year of the rooster. This manuscript was rescued from a burning temple in Rangoon. Phrommachāt, 19th century. British Library, Or.12167, f.21 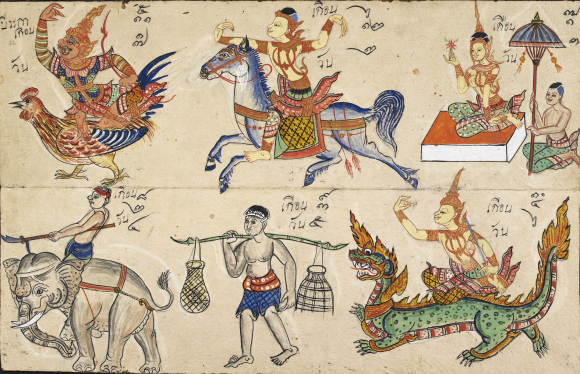 Illustrations with highly symbolic meanings are used to determine the fate of people born on a particular day. Phrommachāt, 19th century. British Library, Or.13650, f.22

People born on Saturday or Sunday (represented by a yaksa riding on a rooster) may be troublesome as children and have a bad temper, but become powerful due to effort and persistence. People born on a Monday (nobleman riding on a horse) are bound to become leaders and gain prosperity, but will have to move around the country a lot and may not settle down. People born on a Tuesday (noblewoman on a pedestal) are thought to have a successful career and live a comfortable and wealthy life. People born on a Wednesday (mahout riding on an elephant) may become very knowledgeable and do well in government service, but there is a chance they will not be happy and have to move far away. People born on Thursday (human carrying goods) may have a lot of trouble and do hard work, but through hard study they could do well and find a dedicated supporter. People born on a Friday (dēva riding on a nāga serpent) are believed to become highly respected persons with an ascending career in government, but their character may be intolerant and impatient and they may not do very well in trade. 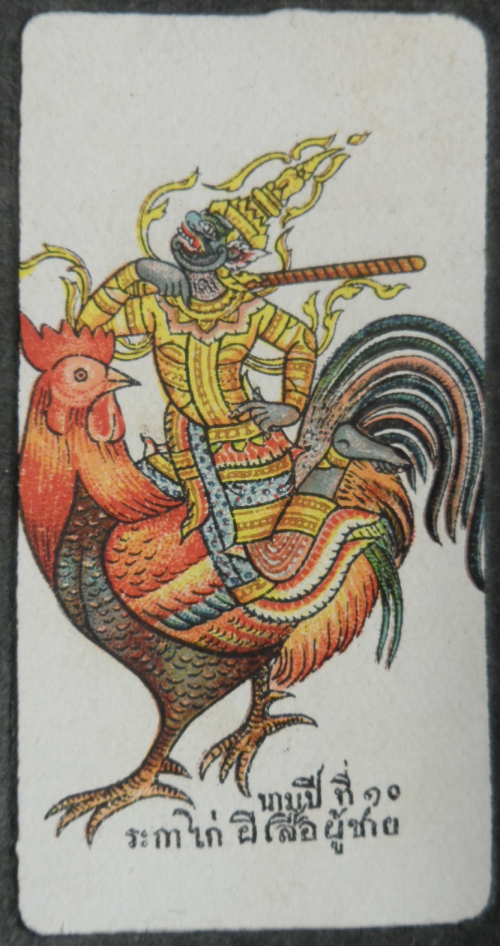 Thai trading card showing one of the fortune-telling symbols for the Year of the Rooster adopted from Phrommachāt manuscripts, [ca. 1920-1940]. These collectibles, which came with packages of cigarettes, were very popular in the first decades of the 20th century. British Library, ORB.30/6575, p.2

The beginning of the Thai New Year, however, does not coincide with the Chinese New Year or the beginning of a new cycle of the Thai lunar year (which usually occurs in December). It is determined by the Buddhist calendar and initially coincided with the rising of Aries in the astrological chart, but is now fixed on 13 April (5th month of the Thai lunar calendar). On this occasion, colourful banners with the twelve animals of the Thai zodiac are drawn and added to sand pagodas in many northern Thai Buddhist temples. Every zodiac symbol is associated with one particular Buddhist temple in Thailand. Many people aspire to make a pilgrimage at least once in their lifetime to the temple that represents their birth year to give offerings and make merit.  Associated with the Year of the Rooster is the Hariphunchai temple in Lamphun, which derives its name from the ancient Mon Kingdom of Hariphunchai. 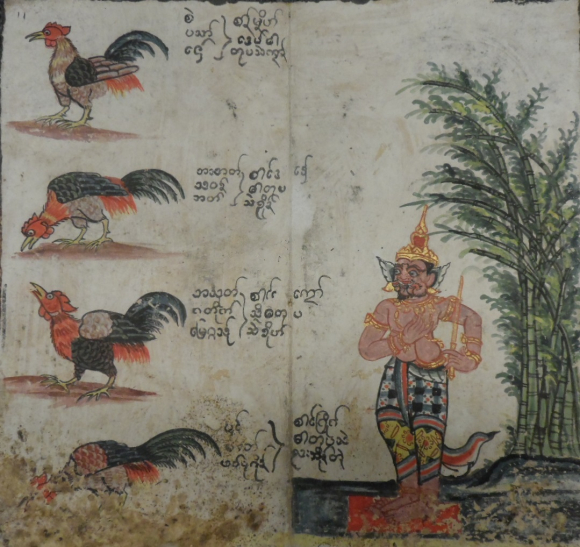 Page related to the Year of the Rooster in a Phrommachāt manuscript in Mon language in Burmese script, 19th century. British Library, Or.14532, f. 11

The Mon people were the founders of some of the earliest kingdoms in mainland Southeast Asia. Right up until today, Mon communities live in Thailand and Burma. The Mon created versions of the Phrommachāt in their own language and script, although the illustrations are usually similar to those in Thai manuscripts. In some Mon manuscripts, the Burmese script was used rather than Mon script. Other versions of the Phrommachāt exist in Northern Thai (Lanna), Lao, Tai Lue and Tai Nuea languages.

Posted by Annabel Gallop at 6:18 AM