During my time at the British Library working on the Asian and African Collection backlog cataloguing project I have come across a number of thought-provoking printed works in the Armenian Collection. The following post describes three examples which for me highlight the fascinating adaptability and ever changing nature of diasporas. They describe Armenian communities which reached their zenith long ago, and are now seldom remembered, but at the same time they exemplify a willingness to embrace the host culture while remembering and respecting their own cultural roots. 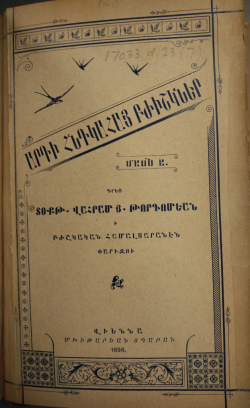 Ardi Hndkahay Bzhiskner ‘Modern Armenian Doctors’ by Doctor Vahram Y. Torgomian (BL 17033.d.23(7)) printed in 1896 by the Mkhitarian Press, Vienna, describes the lives of Armenian Indian doctors. One of the more interesting life stories in the book is that of Doctor Sarkis Avedumiants, who was born in 1854 in Calcutta and baptised in Saint Nazareth Armenian church of Calcutta. He attended the La Martinière School, Calcutta — where there were many Armenian students — and was awarded a gold medal for excellence. He subsequently graduated from St. Thomas’ Hospital in London in 1879 before training with the military in Britain and then returning to India as a British army doctor. contributing to campaigns in Afghanistan and Baluchistan. He achieved high ranks within the army becoming the Commander in Chief of the Bombay Army and Surgeon Major in addition to receiving many awards. He afterwards continued his medical studies, studying at Royal London Ophthalmic Hospital and publishing research on combatting dysentery in the British Medical Journal. Dr Avedumiants’ career is described in detail in the book but, published at a time of growing political consciousness, is interpreted from a nationalistic point of view in terms of an achievement of an Armenian in India that Armenians should be proud of.

Dr Avedumiants’ record can also be found in the India Office Records at the British Library under the name Sarkies Thaddeus Avetoom ( L/MIL/9/408 f.129). 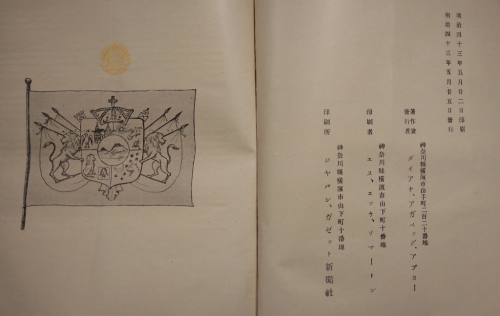 The coat of arms on the left is Diana Apcar’s rendition of a potential coat of arms for an independent Armenian nation. Notice the elements of Armenian culture she highlights in the drawing compared with the coat of arms of the modern Armenian Republic and the 1918 Armenian Republic. The Japanese text gives the publication details: printed 15 May in year 43 in the Meiji period (1910) by the Japan Gazette in Yokohama (BL 08028.ddd.24)

My second title is ‘Betrayed Armenia’, a pamphlet by Diana Apcar published in 1910 by the Japan Gazette in Yokohama (BL 08028.ddd.24). Having married into the famous Apcar trading dynasty the author lived in Yokohama, Japan and spent a lot of her time trying to raise awareness of the conditions of Armenians in the Ottoman Empire. Subsequently she did humanitarian work before becoming the Armenian ambassador to Japan in 1920 after Armenia’s independence. The author specifies that this second edition was intended for circulation in the United States in consequence of the massacre of Armenians in 1909 in Adana. Linking events closely to Armenia’s ancient Christian tradition, she writes, for example, ‘that Armenians may be led again “as sheep to the slaughter” and the work of extermination may be completed’, a prophecy which would become an unfortunate reality in 1915 and subsequent years. My fascination with this text, however, is less concerned with the content than the context. Publishing in Japan, Apcar demonstrated an ability to adapt to the local environment despite being so far from her homeland. The distance from Armenia did not deter her ‘diaspora nationalism’ and appreciation for her ancient culture.[1] It is the passion of this Japanese-Armenian author which makes this printed work so special. 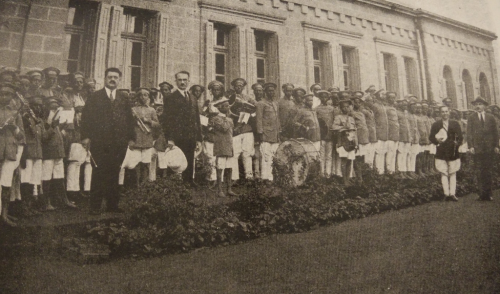 The Lise Teferi Magoneni School students and their Armenian teachers. The teacher on the left is Kevork Nalbandian, a prominent Armeno-Ethiopian musician who taught at the school and wrote the music for the Imperial Ethiopian National Anthem[2]. From Ardi Et’ovpian ew Hay Gaghut’ ě. Venice: S.Ghazar, 1930 (BL HEC.1994.a.509)

My final choice is Ardi Et’ovpian ew Hay Gaghut’ ě ‘Modern Ethiopia and the Armenian Community’ (BL HEC.1994.a.509). Like many works in the Armenian collection, it was printed in 1930 in Venice in the famous Saint Ghazar printing press. The first half of the book describes in detail Ethopia’s politics, society, economics, culture and religion. The second half explores the Armenian community in Ethiopia detailing the lives of prominent Ethiopian-Armenians in fields as diverse as religion, economics, government, education, the military, artists, musicians and commerce. 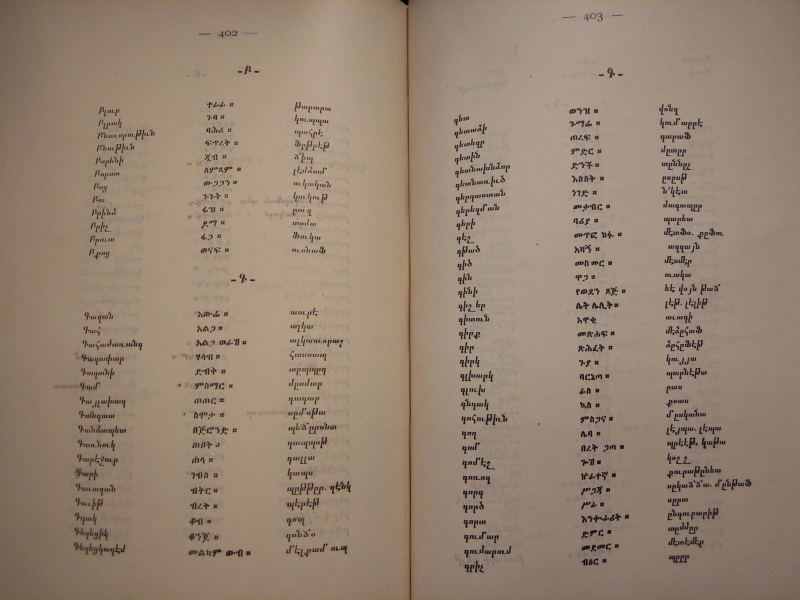 Armenian emigration is much older than the exodus following the Armenian Genocide of 1915 as is shown by two of the examples above. In time the communities adapted to modern political-economic circumstances and either assimilated or emigrated once again. This has led to the near extinction of long established communities in India and Ethiopia and the Armenian presence in Japan is hardly remembered at all. Nonetheless, new diaspora communities have arisen in many more locations globally. Tragic as it is that many prestigious communities have been forgotten, their achievements and existence survive through their literary works preserved, for example, at the British Library and are available for anyone who wishes to remember them.

I am grateful to Momoko Sekido and Eyob Derillo for their assistance in translating Japanese and Amharic script respectively.

[2] For more on Kevork Nalbandian and the Royal Imperial Brass Band formed of Armenian orphans ‘Arba Lijoch’ see ‘In The Company of Emperors: The Story of Ethiopian Armenians’.