Knowledge Exchange visit to the National Library of China

As part of “The British Library in China” Project, the Library recently set up a series of Knowledge Exchange programmes with partners across mainland China and Hong Kong. Gemma Renshaw, Loans Coordinator at the Library, and Robert Davies, Editorial and Rights Manager of the Library’s Publishing team, were the two colleagues selected to visit the National Library of China (NLC) in Beijing in December. The aim of the trip was to learn from the host institution and to explore new terrain for future skills-sharing activities and collaboration. Robert Davies and Gemma Renshaw on the first day of their visit to the National Museum of Classical Books at the National Library of China. © British Library in China

“The British Library in China” Project is a UK government-funded, three-year project designed to strengthen cultural ties between the two countries. The first of a series of exhibitions will be held at the NLC from April 2017 and will feature 11 iconic items from the British Library collections, including an early edition of the works of Shakespeare and Arthur Conan Doyle’s manuscripts. As part of this project, the Library is also developing a Chinese-language website based on the successful “Discovering Literature” platform, to introduce English literature authors and themes to the Chinese public. 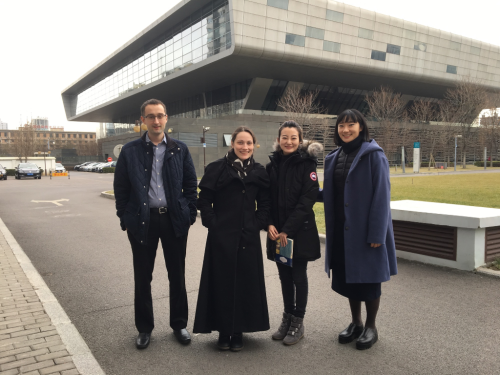 While working closely together to develop a large-scale, joint exhibition, the Library and the NLC are now collaborating in new and exciting ways. The preparation of the joint exhibition has involved several months of fruitful interactions, including video conference calls between teams in London and Beijing. These regular conversations have increased mutual understanding, which helps tremendously when two organisations have different working methods and operating languages.

For Gemma, one of the important objectives of this trip was directly related to the upcoming exhibition. She hoped to find out more details about the exhibition hall facilities and conditions, as well as to finally meet the colleagues in Beijing with whom she had remotely worked for so many months! Gemma writes:

(On the first day of visit) we arrived early at the NLC and were introduced to the Exhibitions and Property Management teams. They showed us around the gallery that we’ll be displaying our objects in and we talked about the display cases, the types of objects they usually show, how the exhibition hall can be laid out for our joint exhibition and how practical work is divided between the two teams. It was really helpful for me to talk to both teams because they split the work that is done by my department at the Library between them. Also, seeing for myself what the gallery and the store room were like allowed me to get answers to important questions regarding security and exhibition hall environment, which otherwise would require a lot of email exchanges and translation help from my Chinese-speaking colleagues at the Library.

Robert paid a visit to the National Library of China Press. This trip provided a valuable opportunity for Robert to build direct contact with the NLC Press. As Robert says:

The visit to the National Library of China Press was a fascinating glimpse into the very different context of museum and library publishing in China. Our counterparts at the NLC Press have a large staff (over 100!) and publish many deeply scholarly books, curating and preserving China’s traditional literary culture for a highly specialist audience. Compared to the BL press, the NLC press focuses much more strictly on its own collection and on Chinese books.

The British Library has longstanding relationships with NLC Press for key projects – works about the Diamond Sutra, for example – but we have never had direct publisher-to-publisher contact in the past. There are clear opportunities for strengthening our partnership in future years – for example, facsimiles of ancient Chinese books and manuscripts as well as the on-going project on the retro-conversion in electronic format of the catalogues of our exceptional holdings of Chinese material from the early republican period.

This visit gave me a unique chance to see these projects from the other side and to build direct contact with editors and publishers – who were generous with their time in showing me their neighbourhood near the beautiful lakes of Beihai Park in central Beijing and provided an extremely delicious Peking duck lunch….

In addition to the NLC press, Robert also visited one of the most popular local bookstores – San Lian Bookstore, which is open 24/7 and is so vast that it spreads over three floors in the central area of Beijing:

Visiting a flagship Chinese bookshop was a great opportunity to find out more about the market for books in China – how they are priced, what cover designs and binding styles are used, and how translated Western books are categorised and sold among Chinese original works. It was also surprising (and inspiring) to see a very traditional bookshop – no café, and no gift products – busy with customers, late into the evening. 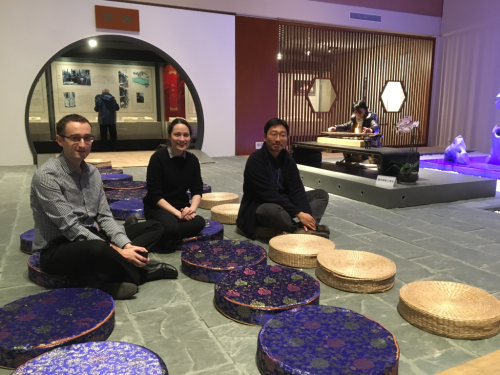 Gemma Renshaw and Robert Davies with Mr Lei Qiang from the Exhibition Department of the NLC. © British Library in China 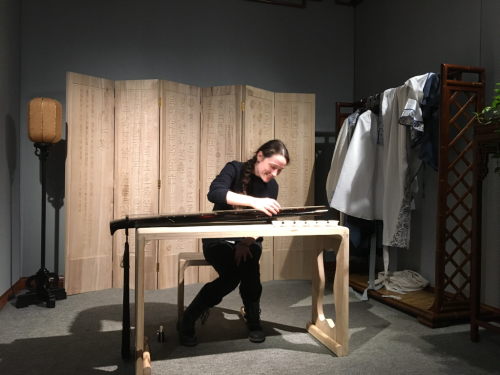 A corner for audience participation at an NLC exhibition dedicated to the guqin, a traditional Chinese musical instrument that was often associated with scholarly life. © British Library in China

The exhibitions on display at the National Museum of Classical Books of the NLC were particularly interesting and informative: new media and interactive technologies have found their way into the NLC exhibition displays and narratives. For Robert, the highlight of visiting the exhibitions was a guided tour of the oracle bones gallery, which has an immersive set-up supported by multi-media projection and ambient sound effect. The way that the exhibition curator had made a complex and specialist subject into an accessible, interesting and hands-on gallery was very impressive.

Other activities of the Knowledge Exchange visit to the NLC included a tour of the book conservation studio and of the Ancient Rubbings and Epigraphy department. In the conservation studio, the traditional Chinese way of master-apprentice knowledge transmission is still very prominent, demonstrated by the way the room is arranged: the master conservators’ desks are positioned in the central area of the room while apprentices’ desks are on the right side of the room by the windows.

While we were there a conservator was working on her research on paper colouration. She was using Chinese brush and mineral paints and experimented combining the paint with a wide range of materials to see which combination would better match with that of an aged page from an old book. This type of approach to paper is rooted in the long history of bookbinding and book conservation in China.

The NLC conservation studio is equipped with very advanced technology machinery, including two labs for paper testing and analysis and a newly established Western Books conservation lab, which the studio manager very kindly introduced to us. This new lab is led by Xiao Yu, a young conservator who studied at the Camberwell College of Arts and has a remarkable knowledge base of both Chinese and Western book bindings and materials. 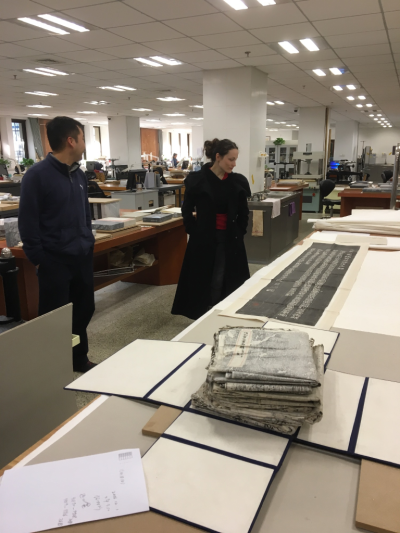 Visit to the conservation studio at the NLC. © British Library in China

At the Department of Ancient Rubbings and Epigraphy we were given a fascinating insight into the large collection of Chinese rubbings. Chinese rubbings are paper copies of the surface of engraved items or reliefs. As a technique, rubbings enjoy a long history of more than 1,500 years in China and East Asian countries. As objects, rubbings represent an invaluable medium for preserving the history and culture contained within important stone stele, bronze vessels and objects in other material such as brick and jade. We were shown how to make rubbings out of a beautiful ink-stone engraved with plum blossoms: a piece of traditional Chinese rice paper was laid flat on the ink-stone and carefully moistened with sprayed water. After the paper dried but remained stuck to the ink-stone, an inkpad with some ink was carefully and lightly pressed on the paper, leaving an ink impression of the plum blossoms image as the carved parts of the engravings were left white on the paper. 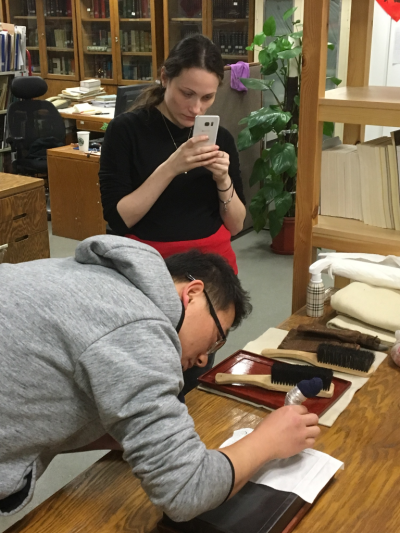 An expert at the NLC showing how to make a rubbing out of the ink-stone engraved with a plum blossom pattern. © British Library in China

Creating a Chinese rubbing is a delicate task: it requires extensive experience to balance the level of the moisture in the paper, the quantity of ink and the correct pressure. The British Library’s Chinese collection hosts a collection of Chinese rubbings, and the Curators of the Chinese section hope to work together with the NLC in future to gain specialist knowledge on how to better conserve, catalogue, store and digitise them. 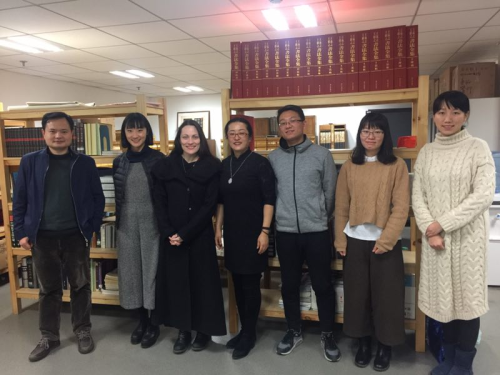 Experts of the Department of Ancient Rubbings and Epigraphy at the NLC welcomed Library staff Gemma Renshaw and Tan Wang-Ward. © British Library in China

The Knowledge Exchange programme will continue alongside the three-year exhibitions project in China and will consist of a series of reciprocal visits between staff members of different areas and departments of the British Library and the Chinese partner institutions, including Shanghai Library and Mu Xin Art Museum in Wuzhen.

Tan Wang-Ward, Project Assistant to “British Library in China” Project, with thanks to Gemma Renshaw and Robert Davies for their contributions.

Posted by Ursula Sims-Williams at 1:16 AM