Some British ‘Islamic’ style seals in Persian manuscripts from India

The history of manuscript movements, usage and ownership in the Islamicate world is a comparatively underdeveloped subject. Happily, however, paratextual studies especially of seals and ownership inscriptions are now becoming increasingly important in research on the early-modern period. In an earlier post, my colleague Daniel Lowe (Performing Authority: the ‘Islamic’ Seals of British Colonial Officers) gave examples of ‘Islamic’ style seals used by British colonial officers in the Gulf well into the 19th and 20th centuries. I thought I would parallel this with some examples of Europeans’ seals found in our Persian manuscripts from India. These can reflect the official status of the owner of the seal or more simply act as a personal statement of ownership. The list is arranged chronologically and is by no means exhaustive, reflecting very much current work in progress! 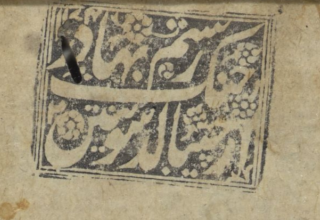 Originally trained as a surgeon Archibald Swinton (1731-1804) began his career in India in 1752 serving under Robert Clive in the Carnatic. From the end of 1759 he participated in the Company’s campaigns against Shah ʻAlam II and at the beginning of 1761 after the battle of Gaya was sent by Major Carnac to negotiate terms with him. Presumably this was when Swinton was awarded the Mughal title Rustam Jang. One hundred and twenty of Swinton's mostly Persian manuscripts were sold after his death by Christie’s on June 6th 1810, however this by no means included all his manuscripts of which the British Library has several. 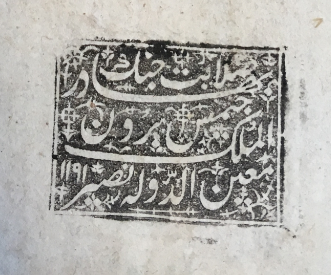 James Browne had joined the East India Company in 1765 and in 1782 was chosen to be Warren Hastings representative at the Mughal Court in Delhi on a mission to supplant the Marathas in Shah ‘Alam's loyalties. Due to delays he was not however presented until 5 Feb 1784. It was during his time in Delhi that Browne wrote his History of the origin and progress of the Sicks which he translated from an especially commissioned Persian manuscript. After Warren Hastings’ resignation and return to England in 1785, Browne was withdrawn from Delhi due to policy changes. The British Library has several of his manuscripts, two of which subsequently belonged to the Marquess of Hastings, Governor-General 1813–1823. 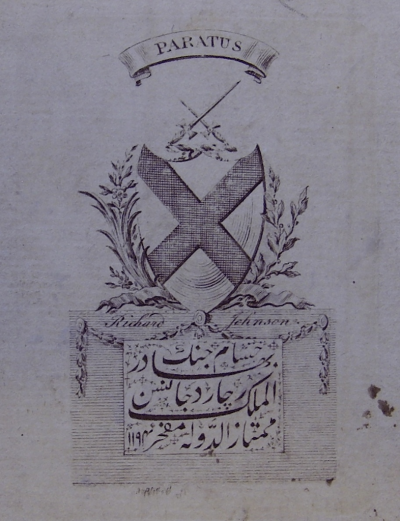 Richard Johnson (See ʻWhite Mughal’ Richard Johnson and Mir Qamar al-Din Minnat) arrived in Calcutta as a writer for the East India Company in 1770. In 1780 he was nominated for an embassy to the Mughal Emperor but for some reason this mission did not materialise[1]. This must have been the occasion of his being awarded the titles Mumtāz al-Dawlah (ʻChosen of the Dynastyʼ), Mufakhkhar al-Mulk (ʻExalted of the Kingdomʼ), Bahādur (ʻValiantʼ) and Ḥusām Jang (ʻSharp Blade in Warʼ) by Shāh ʻĀlam II on 4 Rabīʻ I 1194 (10 March 1780). The titles carried with them the rank (mansab) of 6,000 and insignia of a fish and two balls, a kettle-drum and fringed palankeen[2]. Johnson’s 716 manuscripts and 64 albums of paintings were acquired by the East India Company Library in 1807 and today form one of the most important of the British Library Persian and Arabic manuscript collections. 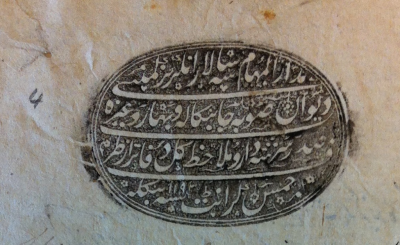 James Grant (1750-1808) was from 1782 to 1784 the East India Company’s Resident at the Court of the Nizam at Hyderabad and while there had several important historical works transcribed for him from the library of Ṣamṣām al-Mulk Shāhnavāz Khān (d.1781), minister of the Nizam. After his return to Bengal, in 1785 he was appointed Chief Sarrishtahdār (‘Account Keeper’) of the Board of Revenue and continued his research into the system of land tenure publishing several important works on the subject. The post was abolished in 1789 and Grant returned to Scotland. Several of his manuscripts were acquired by the British Museum in 1825 as part of a bequest of the Rev. John Fowler Hull. 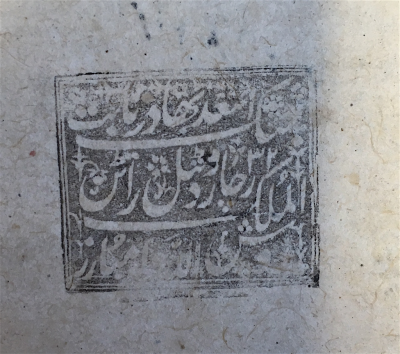 Major Richard Rotton (b. 1770[3]) was an English mercenary who, unsuccessful in joining the East India Company in 1801, for economic reasons joined the Marathas. He became one of Richard Wellesley’s most highly prized spies before being discharged and transferring to the Company in 1803 at the beginning of the Second Anglo-Maratha War (Cooper, pp. 241; 264-6). Rotton had obviously been active in India for a long time before this to judge from the date of his seal which presumably corresponded with the date of his being awarded his titles. One of his sons with an Indian mother, Felix, was employed by successive nawabs of Awadh for twenty years or so, commanding part of their artillery, and reaching the rank of captain in 1856 [4]. 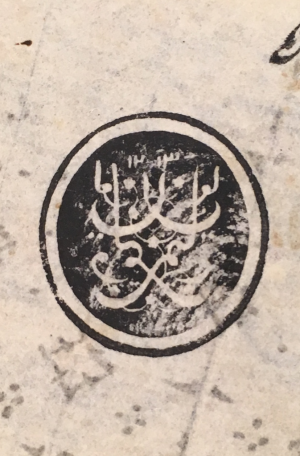 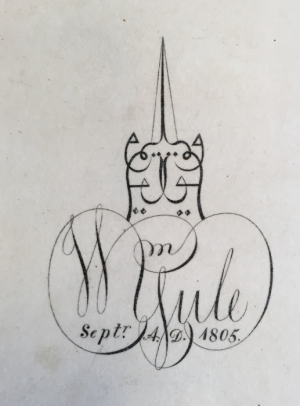 Seal of William Yule dated 1213 (1798/99), an example of musanná calligraphy in which the letters of his name are written on each side as mirror images. Yule subsequently developed this design to form a cat-shaped bookplate dated 1805 (BL Add.16802, f3r and flyleaf)

William Yule  (1764-1839) went to India as a cadet in 1781, returning to Scotland in 1806. During the latter part of his career he was Assistant Resident in Lucknow under Lieut.-Col. William Scott, and afterwards in Delhi under Lieut.-Col. David Ochterlony. His collection of 267 Arabic, Persian, and Urdu manuscripts were given to the British Museum by his sons in 1847 and 1850. It includes many very important works partly derived from the libraries of the Safavid prince Abuʼl-Fath Mirza, the Dīwān of Awadh Maharaja Tikait Rai Bahadur (1760–1808), and of the French General Claude Martin (d.1800), all of whom were his contemporaries in Lucknow. 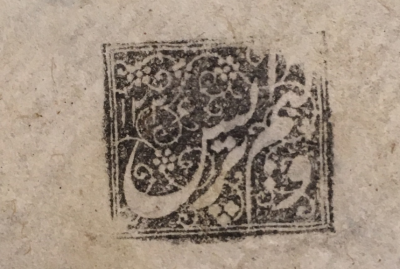 Although there were several people with this name active in India at the time, this is likely to be William Price (1788-1888) who taught Sanskrit, Bengali and Hindi at the College of Fort William Calcutta between 1813 and 1831. 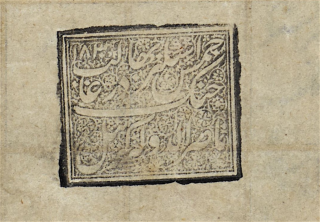 James Skinner (for more on him see James Skinner's Tazkirat al-Umara now digitised) the son of a Scottish soldier father and Rajput mother, like William Rotton above was a mercenary working for the Marathas. When war broke out between the East India Company and the Marathas in 1803, he took advantage of the Company’s offer to come over to its side. He founded the famous regiment of irregular cavalry, Skinner’s Horse, known as the ‘Yellow Boys’. The manuscript in which this seal occurs was Skinner's own copy of his Tazkirat al-Umarāʼ (‘Biographies of Nobles’) which he presented to his friend Sir John Malcolm (1769-1833) who had just retired as Governor of Bombay. The titles Nāṣir al-Dawlah (‘Defender of the Stateʼ) and Ghālib Jang (ʻVictorious in War’) were  granted to him on 3 May 1830 by the Mughal Emperor Akbar II.

There are doubtless many more examples of similar seals waiting to be recorded. Apart from telling us more about the individual seal owners and their taste in reading matter, the dates and titles granted demonstrate the increasing assimilation and integration of the British into the Indo-Persian culture of pre-modern India.

Posted by Ursula Sims-Williams at 12:31 AM