The presence of an inscription in Arabic script is such a defining characteristic of seals used by Muslims that it tends to mask the fact that similar ‘Islamic’-style seals were also used by myriad other groups, including Christians in Ethiopia and Syria, Samaritans in Palestine, Hindu subjects of the Mughal emperor, European scholars of Arabic and Persian, and British officials of the East India Company. Examples from the British Library were featured in a recent blog post on Some British ‘Islamic’ style seals in Persian manuscripts from India by Ursula Sims-Williams, and in an earlier post on Performing Authority: the ‘Islamic’ seals of British colonial officers in the Persian Gulf by Daniel Lowe. In this post I have gathered together a small number of British ‘Islamic’-style seals from Southeast Asia, with inscriptions in Malay in Jawi (Arabic) script.

The earliest known of these British Malay seals is that of Francis Light (1740-1794), who on behalf of the East India Company negotiated with the Sultan of Kedah to establish a trading settlement at Penang in 1786. By that time Light had spent over twenty years as a private or ‘country’ trader in the Malay world, and was on close terms with the sultan. In 1771 he had been granted the title of Kapitan Dewa Raja by Sultan Muhammad Jiwa of Kedah (r. 1710-1778), with the attendant right to a seal, which is found stamped in red ink on his Malay correspondence today held in the Library of the School of Oriental and African Studies. 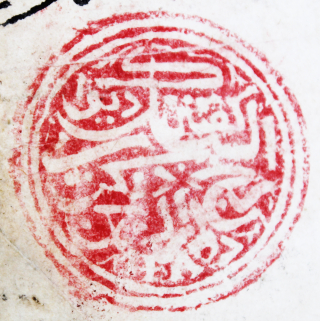 Light became the first ‘Superintendant’ of Prince of Wales Island, as Penang was named by the British, and subsequent governors also used seals inscribed in Malay. Official Malay seals were usually engraved in the name of an individual office holder, but the seal shown below, engraved in 1789/90 for the British ‘ruler’ of Penang, appears to have been used by successive incumbents of the office until at least 1805. It was perhaps in that year that a new seal was engraved for Philip Dundas, Governor from 1805 to 1807. In terms of language, calligraphy, shape and medium, the seals used by British officials in Penang represent a continuation of the Kedah Malay tradition, with typically round or petalled lotus-shaped seals stamped in red ink. 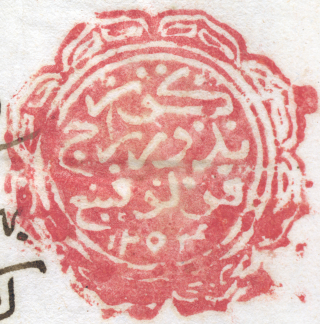 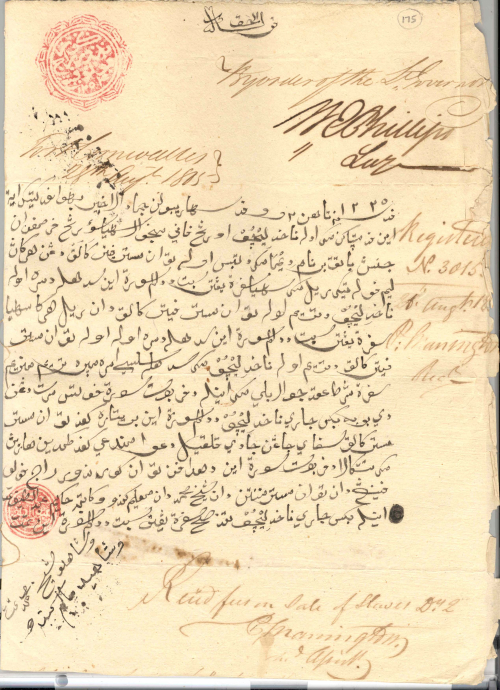 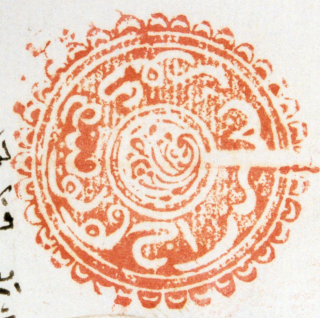 It was in Penang that Thomas Stamford Raffles (1781-1826) began his Southeast Asian career, arriving on the island in September 1805 as Assistant Secretary to the government. In December 1810 Raffles moved to Melaka following his appointment by Lord Minto as ‘Agent of the Governor-General with the Malay States’, his secret mission being to prepare for the British invasion of Java, then held by Napoleonic forces. In his Malay correspondence with neighbouring states, Raffles wrote in the name of Lord Minto, and stamped his letters with the seal of the Governor-General of Bengal. Two such seals are known: the earlier seal, used in 1810 and the first half of 1811, is written in sloping nasta ‘liq script, and may have been brought from Calcutta. The second seal is more typically Malay in its 12-petalled lotus shape and naskh calligraphy, and was probably designed in Raffles’s secretariat in Melaka either by his head scribe, Ibrahim or by Ismail, uncle of the young Munsyi Abdullah, who also worked for Raffles as a junior writer. 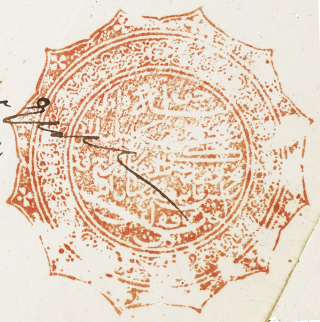 Inilah cap Paduka Seri Maharaja Gilbetelet Lard Minto Gurnur Jenral Benggala raja pada sekalian tanah Hindustan atas angin bawah angin adanya, ‘This is the seal of Paduka Seri Maharaja Gilbert Elliot Lord Minto, Governor General of Bengal, ruler of the whole of Hindustan, above the winds [and] below the winds’ (#99), stamped on a proclamation of the British capture of Batavia, issued by Lord Minto and signed by T.S.Raffles, 11 August 1811. British Library, Or. 9484

In later years, with the expansion of British colonial rule across the Malay peninsula, seals with Jawi inscriptions sometimes accompanied by elements in English continued to be used by senior British officials, including Residents of Malay states and the Governor-General of the Straits Settlements. 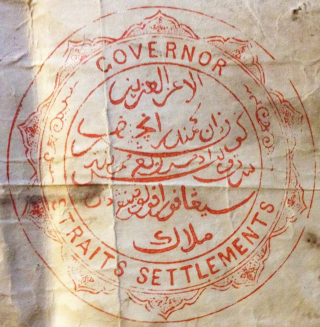 In contrast to British practice of using Malay seals, Dutch officials in Southeast Asia – whether during the period of VOC rule of the Dutch East India Company in the 17th and 18th centuries, or in the service of the Netherlands East Indies in the 19th century and later – never used ‘Islamic’-style seals.  Only one example has been recorded, found in an album of seals from Palembang,  but without evidence that it was ever actually used on official correspondence. 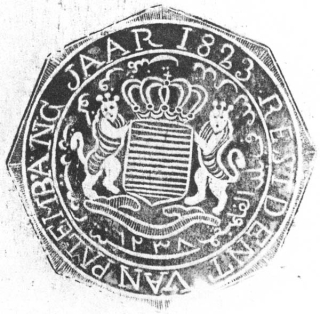 The earlier post on the seals of British orientalists in India also throws light on an unusual seal in a fine Javanese Pawukon divination manuscript in the Bodleian Library, Oxford (MS Jav. d. 2). Each of the thirty wuku or weeks of the Javanese calendar is associated with a particular god, tree, bird, foot, house and pennant, which can be used to predict the character and fortune of those born in that week. In the corner of one illustrated page of the Bodleian Pawukon is a small oval seal written in muthanna symmetrical mirror script, previously assumed to be the seal of a Javanese artist or owner of the book. Thanks to Ursula's research, this seal can now be identified as that of William Yule (1764-1839), an East India Company official who had served in Lucknow and Delhi. Yule built up an important collection of Arabic, Persian and Urdu manuscripts which were given to the British Museum by his sons in 1847 and 1850, and some of the manuscripts contain impressions of exactly the same seal, and his related bookplate, in English and Persian, also composed in muthanna script. Although William Yule was never in Southeast Asia, his brother Udny Yule (ca. 1765-1830) served with the British administration in Java and in 1815 was the commanding officer in Banten, and may have acquired the Pawukon for his bibliophile brother. Before entering the Bodleian the book was owned by James Thomson Gibson Craig (1799-1886), renowned for his library in various languages. 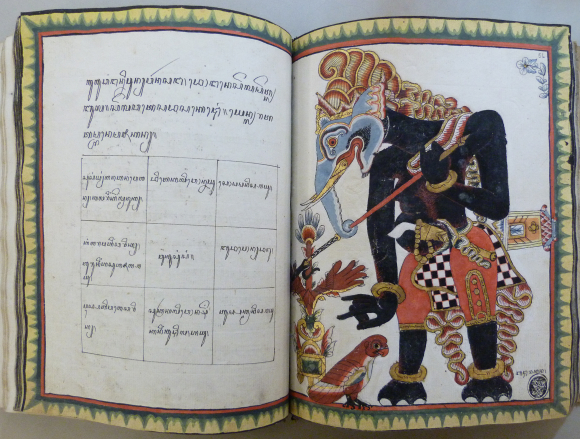 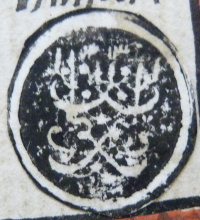 Posted by Annabel Gallop at 1:36 AM