One of the hottest topics on every economist’s lips is the rising price of housing in the United Kingdom. At last count, the average home price in Great Britain was £220 000. For roughly the same price, however, you could also acquire a book on the history of the Americas. This would be no ordinary history, however: İbrahim Müteferrika’s edition of the Tarīkh al-Hind al-Gharbī ul-müsemma bi-Hadis-i nev, or The History of the Western Indies, also known as the New Hadith is the first book by a Muslim about the Americas, and among the first Ottoman Turkish books printed in Istanbul. The Tarīkh is an exceedingly rare item. Of the 500 copies that were produced by İbrahim Müteferrika in 1730, only 17 are known to exist around the world. The British Library is lucky enough to be one of only a handful of institutions in Europe and North America to have two copies of the work. One, at shelfmark Or.80.b.11, contains twelve of the thirteen original black and white woodcut illustrations, as well as the two colour woodcut maps of the world. The other, at shelfmark Or.80.b.7, contains all thirteen black and white illustrations, but neither of the two maps. Both copies are lacking the celestial chart and the chart that are contained in the copy at the Bibliothèque nationale de France in Paris. 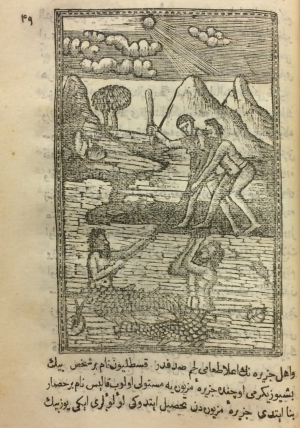 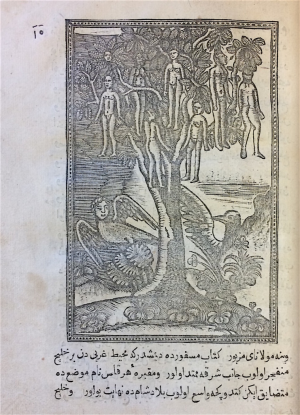 On the left (BL Or.80.b.7), flora and fauna of Hispaniola, including the mermen and their splendid pearls, brought back to Europe by a man named Castellón, as well as the tree with fruit like women (BL Or.80.b.11)

The Tarīkh is a unique publication for reasons that are far more profound than the paucity of surviving copies. It is not an original creation, but rather based upon the 16th century manuscript of the same name believed to have been authored by Emir Mehmet ibn Emir Hasan el-Suudi in 1591. Nevertheless, the fact that it was a printed work, rather than a handwritten one, established İbrahim Müteferrika as a pioneer in Ottoman Turkish cultural history. Between the issuance of an imperial ferman on commercial activities related to “certain of printed Arabic, Persian and Turkish books and writings” (Neumann, p. 229) and the 1720s, printing was conducted only by the Jewish and Christian communities, whose works were in non-Arabic scripts. The 17th century saw the importation of Ottoman Turkish works printed in Europe, but both the typography and the language of the content itself were the subjects of derision. The Arabic script requires that some – but not all – letters be attached to those that follow them (to their left), and this characteristic bedevilled European typesetters and those who sought to sell presses to Ottoman clients. At best, the technology created comical mistakes or miscomprehension. At worst, the resulting errors in holy texts led to charges of blasphemy and the befouling of God’s word (Sabev, pp. 107-9). 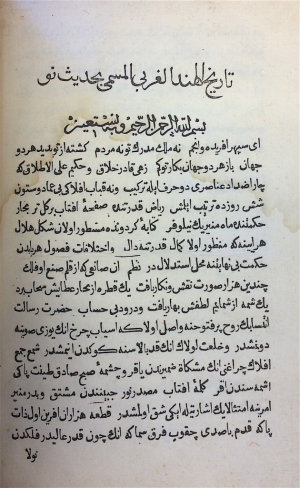 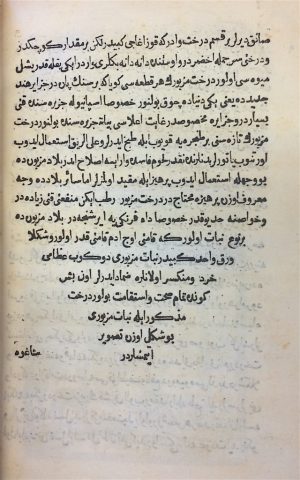 The first page and the end of the chapter on the History of the Western Indies. The text begins in Persian, with an explanation of the real nature of these fantastical images and descriptions, and ends in Ottoman Turkish with information about the culinary delights of the islands (BL Or.80.b.7)

The man who appears to have broken this deadlock was known as İbrahim Müteferrika. He is believed to have been a Transylvanian Christian who converted to Islam and migrated to the Imperial capital of Istanbul at the end of 17th century, possibly to escape religious persecution at the hands of the Hapsburgs (Erginbaş, pp.63-4). His personal history is an apt analogy for the printing press that he popularized: a Christian European invention that was imported and nativized to the Ottoman Empire, ultimately serving to further, rather than harm, the cultural development of the Well-Guarded Domains. İbrahim Müteferrika printed numerous different titles at his workshop in Istanbul, many of which are currently held in the British Library. Apart from the Tarīkh al-Hind al-Gharbī, the Library also holds copies of his Tarih-i seyyah der beyan zuhur-i Agvanian (758.e.9), Tercüme-yi sɪhah-ɪ Cevheri (758.k.7), Takvim üt-tevarih li-Kâtip Çelebi (Or.80.a.8) and Usul ül-hikem fi nizam ül-ümem (758.e.1). Many of these are secular histories or manuals of geography. They demonstrate a concern for steering clear of religious and moral controversy regarding the content of his works and the effect of typography on the text. Some were even presented as serving in the interests of Islam, because of the importance of education holy warriors on the geography of neighbouring regions (Sabev, p. 109). In spite of this, the mere presence of depictions of flora and fauna was enough to raise the ire of some zealots, who sought to destroy his books. 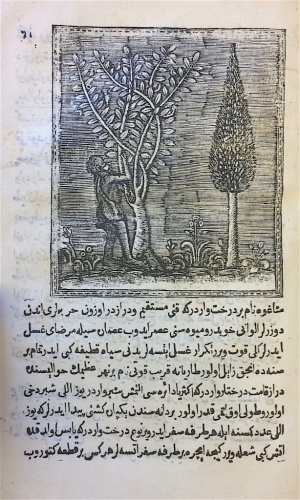 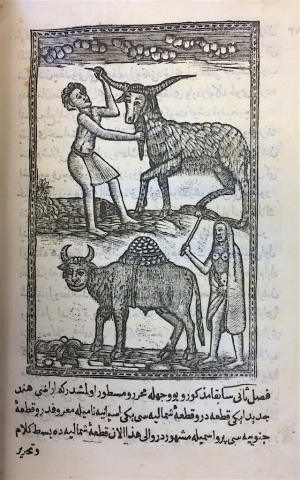 On the left, the famed Chagos tree, the juice of whose fruits is reputed to cure illnesses. On the right, images of native agriculture in South America, including the usage of oxen-like animals to plough fields (BL Or.80.b.7)

Why would someone want to destroy a history book of the Americas? One particular reason might be the sheer number of woodcut illustrations of the people, animals and plants of the Western Hemisphere. Some of these images feature semi-nude members of indigenous communities, while others provide readers with an idea of the wondrous plants and animals to be found in the Americas. Much like Dürer’s rhinoceros, these illustrations are as much representations of Europeans’ imaginations as they are accurate depictions of the flora and fauna they claim to be. Whether or not graven images are permissible under Islamic law, and, if not, how strictly this prohibition was enforced, are issues of great debate among scholarly communities. What is clear from the Tarīkh, however, is that they did appear in the first Ottoman Turkish-language printed publications; and that they likely made the works more controversial than they would have otherwise been. 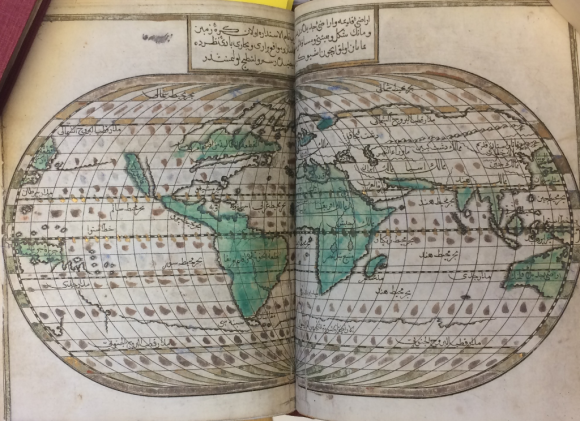 A map of the world, including California as a green island in the top left quadrant of the map. The “Sea of Peru” is also listed as being along the coast of Central America, while the Gulf of Mexico is labelled the “Sea of Mashigho”. (BL Or.80.b.11)

Even more spectacular than the illustrations, however, is the world map included in one of the copies held at the British Library (Or.80.b.11). One of its most striking features is the depiction of California as an island separated from the mainland of North America by a channel of water. Given that the southern tip of this “island” extends to the middle of Mexico’s Pacific coastline, it is fair to assume that İbrahim Müteferrika’s mapmaker did not know that the Gulf of California had only one outlet to the Pacific Ocean. The map is plagued by various inaccuracies: the St. Lawrence River is too deep and the Gulf of Mexico too shallow; the Great Lakes are merged into one, while North America seems to be in various pieces. Nevertheless, it is difficult to contain one’s awe at the manner in which the world as we now picture it – thanks to satellite imagery and enhanced modeling – came together in the minds of cartographers and dreamers from 1492 onwards. 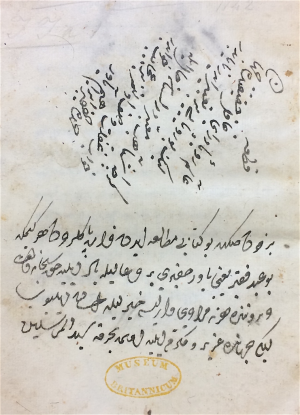 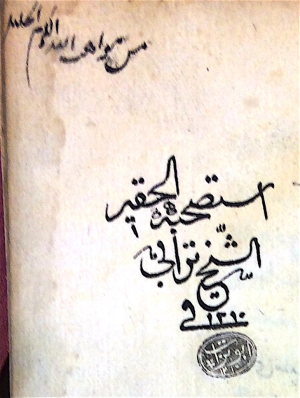 The varied history of the books as items of pleasure and prestige are recorded through the ownership stamps and marginalia of their readers. On the left (BL Or.80.b.7) is a poetic exhortation to readers about the content of the books, while the right-hand image (BL Or.80.b.11) is the ex libris of Shaykh Tirabi (1210 AH/1795 CE)

It should also not be a surprise that these maps are of particular interest to collectors: a reason why so many copies of the Tarīkh are incomplete, including one of those held at the British Library (Or.80.b.7). The Tarīkh al-Hind al-Gharbī ul-müsemma bi-Hadis-i nev is not a roof over your head, or a little corner to call your own, but, just like a home, it has served as a symbol of identity and personality for various owners. The presence of various signs in the works held at the Library – marginalia, ownership stamps and the like – bears witness to this fact. The names of individuals and libraries through whose hands these volumes passed tell as much of a story as the text itself. So too, do the poetic messages scrawled on the opening pages of the work; a testament to the way the written word, in whatever its form, has given rise to dreams and imagination for centuries on end.