The Book of Esther and the Jewish Festival Purim

Purim is undoubtedly one of the most boisterous, cheerful and joyous festivals in the Jewish calendar. It takes place in early spring on 14th of Adar which this year starts at sundown on March 11th. Purim celebrates the salvation of the Jews of Persia during the reign of King Ahasuerus. The moving and dramatic story of Esther and her uncle Mordecai is told in the Book of Esther, known in Hebrew as Megilat Ester (Scroll of Esther).

The Book of Esther belongs to Ketuvim (Writings), which is the third division of the Tanakh (the Hebrew Bible). Haman, the conniving chief minister at Ahasuerus’ court, decreed to kill all the Jews in the King's vast empire that stretched from India to Ethiopia and included 127 provinces. Lots (in Hebrew purim) were cast to determine the date when the Jews would be exterminated, hence the festival’s appellation. Esther, the King's Jewish consort, was warned in time by Mordecai, and they both managed to thwart the annihilation of their people. The King punished Haman and rewarded Mordecai who sent letters throughout the kingdom, urging Jews to observe Purim every year with merrymaking and gift offerings.

The historic origin of the Book of Esther and its authenticity have been the subject of much debate and conjecture over the years. There have been chronological difficulties with King Ahasuerus, even though some researchers have claimed that he was in fact the Persian king Xerxes I, who ruled 485 - 465 BCE. The Septuagint (Greek version of the Hebrew Bible) and Josephus (Jewish scholar and historian who lived 37-100 CE), maintained that the king in the story was actually Artaxerxes I (465-424 BCE).

According to recent research the Book of Esther was written in the middle of the 4th century BCE during the reign of Artaxerxes III (359-338 BCE), however the absence in Persian sources of any references to a king that had a Jewish consort created a new problem. Some scholars have contended that given the striking resemblance between the names Esther and Mordecai to the Babylonian deities Marduk and Ishtar, the story was rooted in Babylonian worship practices, which the Jews would have adapted and transformed into the story of Esther. The well-known German Jewish historian Heinrich Graetz (1817-1891) for example, argued that the Book of Esther was written at the time of the Maccabean struggle (167-160 BCE) against Antiochus IV Epiphanes, in order to boost the spirit of the Jews at that critical time, and to show that God does not abandon its people.

As a matter of interest, the Book of Esther does not feature among the Dead Sea Scrolls (spanning 150 BCE – 70 CE) and references to Purim do not feature in the Jewish literature before the 1st century CE. What can be said with some certainty is that since the Talmudic period (c. 500 CE) the Book of Esther has been customarily written on parchment in the form of a scroll, and that the festival had long been established by the 2nd century CE as evidenced in the tractate Megilah of the Mishnah (corpus of the oral tradition of Jewish law). The tractate contains details on the festival’s observance and the rules governing the reading of the Scroll of Esther.

As God’s name is not explicitly mentioned in the Book of Esther, it was considered permissible to illustrate it. Scrolls of Esther read in the synagogue during the festival services had to be plain, however, scrolls intended for personal use could be illustrated with scenes from the narrative or ornamented with other motifs.

Esther Scroll decoration flourished particularly in the 17th, and especially in the 18th century, in Italy, Holland and to a lesser extent in Germany. The tradition of decorating and illustrating the Scroll of Esther continued in the centuries that followed, with fine specimens being produced in Europe as well as the Middle East and North Africa. In Italy, especially, Esther Scrolls were lavishly decorated. In fact, the earliest surviving embellished Esther Scrolls were created in the second half of 16th century Italy.

The Marelli Scroll held in the British Library’s Hebrew manuscript collection, is a beautiful and rare example of Esther Scroll ornamentation from that period. Its decoration consists of eight different types of copperplate engraved borders that frame the handwritten text of the Book of Esther. The borders bear no relation whatsoever to the story, featuring instead a lavish array of putti, grotesque telamons and pagan goddesses holding heraldic shields, and real and fabulous animals hand-coloured in bright hues. The creator of those impressive borders was Andrea Marelli, a book illustrator and printmaker who was active in Rome and Sienna around 1567-1572. 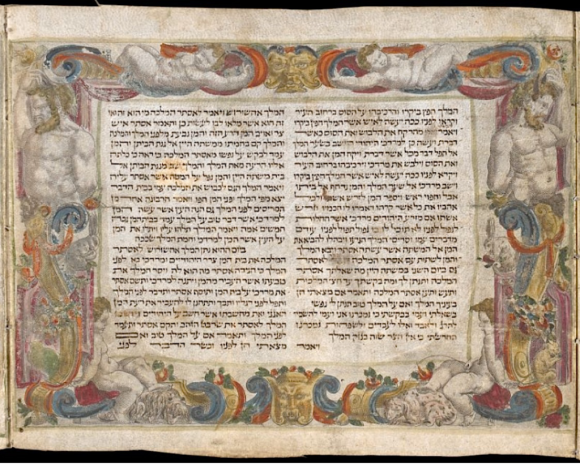 Finely engraved specimens from 17th and 18th century Holland have also survived. Some of these have grand arched portals encasing the text. The portals are supported by columns on high pedestals between which stand the principal characters of the Esther tale: Ahasuerus, Mordecai, Esther and Haman. Episodes of the Esther narrative are confined to the lower borders, whereas the upper borders are populated by female figures bearing palm leaves. These specific pictorial schemes typify scrolls created by Salom d’Italia (1619-1655). A native of Italy as suggested by his name, he most probably acquired his drawing and engraving skills from his uncle, the Mantuan printer Eliezer d’Italia. In 1641 Salom moved to Amsterdam and worked there until about 1648, creating some exquisite pieces among them portraits of prominent figures and Esther Scrolls. 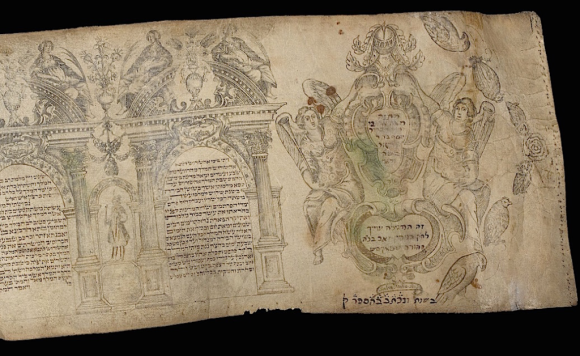 Often, embellished special cylindrical containers in silver, gold or ivory, were made to hold and protect the scrolls. We do not know exactly when special cases were first used, however, a brief mention to a case can be found in Bernard Picart’s Ceremonies and Religious Customs (Amsterdam, 1723). That might not be the earliest reference to a Scroll of Esther case, yet it is the only one I have managed to find. 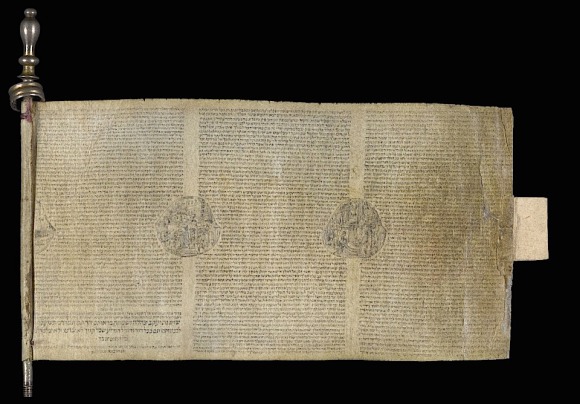 Throughout the generations, the story of Esther has been cherished by Jews everywhere for its message of bravery, resolve and faith. The eventful and theatrical narrative which is reminiscent of an Arabian Nights story, and the exuberance and merriment associated with the Purim celebrations, have lent themselves to an outburst of literary activity. The carnival spirit of the festival and the Book of Esther’s striking protagonists have been captured and immortalised in drama, poetry and prose, with virtually hundreds of surviving works in English, Hebrew, Yiddish and other Jewish languages, spanning many centuries. The British Library’s Hebrew collection abounds in printed material dedicated exclusively to the festival. This is just a small cluster of some noteworthy pieces: 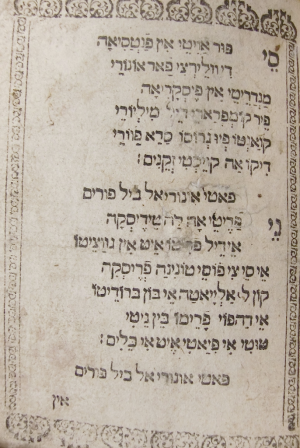 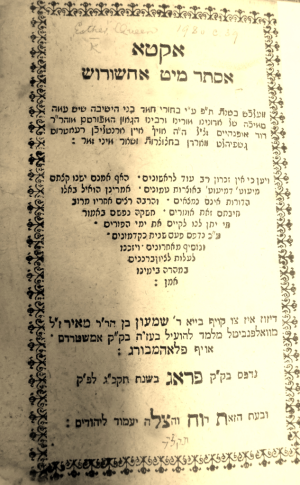 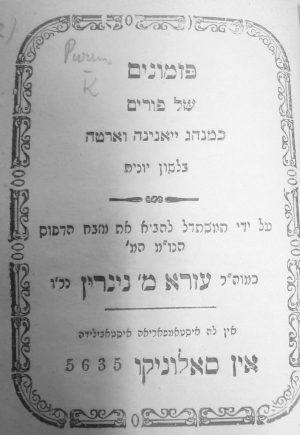 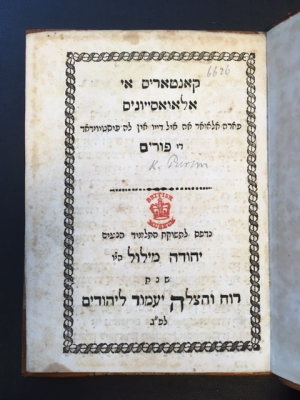 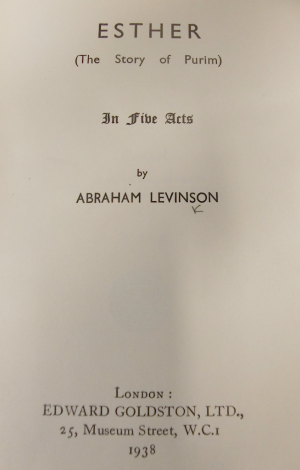