In Vietnamese culture, as in many other East and South East Asian societies, the dragon plays a very prominent role. It is arguably the most sacred of the four mythical creatures - the dragon, the phoenix, the unicorn and the turtle - and its pre-eminence is closely related to the birth of the nation. Legend has it that Lạc Long Quân, king of the dragons who lived in the water, married Âu Cơ, a fairy from the bird kingdom. She gave birth to 100 sons and her first-born son became King Hùng Vương of Lạc Việt, the first dynasty of Vietnam. The word 'Long' in the name of the legendary Lạc Long Quân (Dragon Lord of the Lac) is a Hán-Việt word which also means 'dragon', or rồng in modern Vietnamese. Hence there is a proverb saying that the Vietnamese are con rồng cháu tiên or “children of the dragon and grandchildren of the fairy”.

Gilded dragon on the reverse of an Imperial edict of Emperor Khải Đinh, 1924. British Library, Or.14665

From the very birth of the country, the dragon has thus been closely associated with Vietnamese kings or rulers, but it is believed that in even earlier times the dragon was used as a symbol at clan level to represent talent, noble and beauty. There are proverbs which refer to the dragon in this context, such as chữ viết đẹp như rồng bay phượng múa, 'handwriting is as beautiful as a flying dragon and a dancing phoenix'. However the increasing use of the word 'dragon' and objects with dragon patterns by feudal lords led to this creature becoming a symbol of the authority of the imperial clan. In China, it is believed that an emperor of the Han dynasty (B.C.206-A.D.220) was the first ruler to use the dragon to represent his authority.

Vietnamese tales and legends also reinforce a close association between this creature and the country’s rulers. For example, when Lý Công Uẩn took power from the Early Lê dynasty in A.D. 1009, he is said to have seen a golden dragon descending from the sky over Đại La citadel. He therefore renamed Đại La as Thăng Long ('Rising Dragon'). Lý Công Uẩn  became Emperor Lý Thái Tổ, the founder of the Lý dynasty (A.D. 1009-1225) and Thăng Long, which later became Hà Nội, was chosen as the capital. It is believed that both the new emperor and the capital city were blessed by this mythical creature right from the very beginning. Lý Thái Tổ was not the only emperor who claimed to see a golden dragon during his reign, for Emperor Lý Nhân Tông (A.D. 1066-1127) and Emperor Lê Thanh Tông (A.D. 1442-1497) were also said to have seen golden dragons several times during their reigns (Zeng Zen 2000: 46). 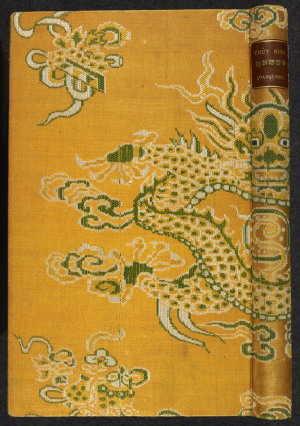 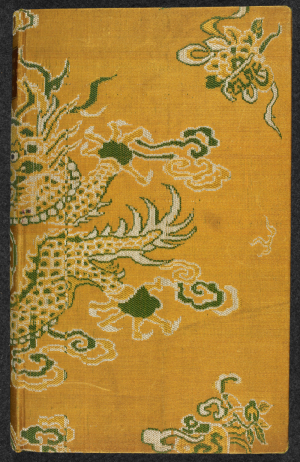 The Imperial dragon depicted on the yellow silk front and back covers of a manuscript of KimVăn Kiều, 19th c. British Library, Or.14844

The dragon is regarded as immortal and even though its appearance can seem frightening, it does not represent evil. On the contrary, in Vietnam the dragon was always regarded as a symbol of power and nobility, and thus became the chief attribute of the person highest in nobility and greatest in power: the emperor or king (Buttinger 1983: 20). The Vietnamese imperial throne is called bệ rồng or 'dragon throne', while the throne hall in the palace where the emperor granted public audiences or worked, such as that in the former imperial capital city of Huế, was also decorated with dragons. Imperial attire and accessories were also related to the dragon; for example, the imperial gown was called a long bào and his hat was called a long quân. The dragon with five claws was reserved for imperial use, while one with four claws was for the use of royal dignitaries and high ranking court officials. For commoners, their dragons could only have three claws.

From a geographical aspect, the shape of Vietnam, which resembles a letter S, also enhances the dragon myth. The Vietnamese consider the shape of their homeland to be similar to a winding dragon: the northern part is its tail, central Vietnam is its body with the Trường Sơn mountain range (the Annamite Range) as its back and spine, and the dragon’s head lies in the southern part, with its open mouth spraying water into the South China Sea. It should be noted that when the Mekong River reaches the south of Vietnam and branches into nine tributaries in the Mekong River Delta, it is called Sông Cửu Long or the 'Nine Dragon River'. Dragons also appear in many other aspects of Vietnamese life and culture. On auspicious occasions such as the Vietnamese New Year, a dragon dance will be organised. The Nguyễn court (A.D. 1802-1945) also declared the Dragon Boat Day, originating from Chinese traditions, as one of the 'three great holidays' in Vietnam along with the lunar New Year (Tết Nguyên Đán) and the emperor’s birthday. The boat race festival was celebrated on the fifth day of the fifth lunar month by peasants in South China and Vietnam, to ward off poisonous spirits (Woodside 1988: 36-37). Many Vietnamese proverbs and children's plays relate to dragons, and many place names in Vietnam also contain the word “Long”, or 'Dragon'. 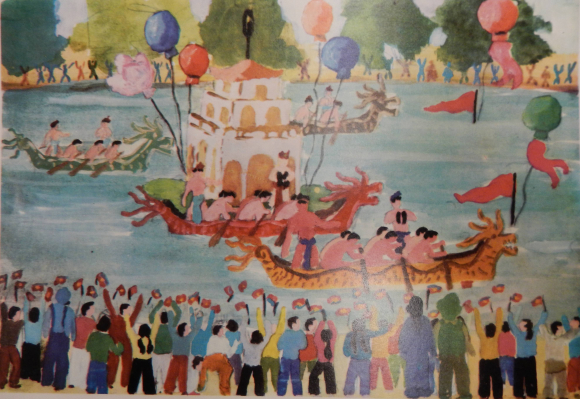 In Hồ Chí Minh City (formerly Sài Gòn), there is an historic building called Nhà Rồng, or the Dragon House, located at the old port of Saigon. The house was built by the French in 1862-1863 in a French colonial style, but on the roof top there were two symmetrical ceramic dragons facing each other and looking at the moon, hence the name Nhà Rồng. It was from here that the young Hồ Chí Minh embarked on a ship to sail to France in June 1911, on his search to find methods to fight French colonialism and seek independence for his motherland. Symbolically, dragons seem to appear in some critical junctures in Vietnamese history.

Posted by Annabel Gallop at 5:23 AM