The Persian writer and poet Musliḥ al-Dīn Saʻdī of Shiraz (ca.1210-1291 or 1292) is without doubt one of the best-known and most skillful writers of classical Persian literature. With an established reputation even during his lifetime, his works have been select reading for royal princes and ʻset textsʼ for more humble students of Persian the world over. It is hardly surprising then that a corresponding number of deluxe copies survive of his works. A previous post (What were the Mughals' favourite books?) described some copies of his best known works, the Būstān (ʻFragrant Gardenʼ or ʻOrchardʼ) and the Gulistān (ʻRose Gardenʼ), in the Library's collection. Another sumptuous manuscript, which has also been digitised, is an early 17th century copy of his Kullīyāt (ʻCollected Worksʼ), IO Islamic 843 which was completed in 1034 (1624/25) by Maḥmūd, a scribe of Shiraz (al-kātib al-Shīrāzī), during the reign of Shah ʻAbbas (r. 1588-1629). 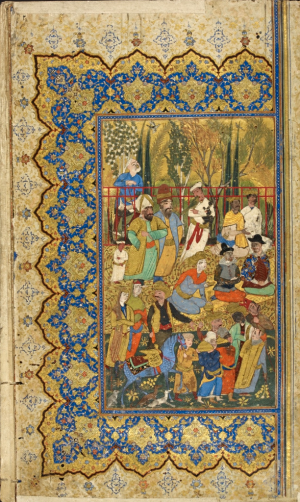 The frontispiece portraying Shah ʻAbbas in a garden surrounded by courtiers and musicians, and accompanied by Turkish, Indian and European ambassadors (BL IO Islamic 843, ff 1v-2r)

Very little is known about the poet’s life. Born in Shiraz, Saʻdī left his hometown to study in Baghdad. After a period of study at the Nizamiyah Madrasah, Baghdad, he set off on travels that lasted over thirty years. His experiences and adventures found their way into his writings, including being a prisoner of the Crusaders in Syria, visiting Kashgar, and killing a temple priest at Somnath in India. Many of these tales, however, have been proved to be anecdotal rather than biographical. Saʻdī returned to Shiraz in 1257, already a widely recognized poet and completed his two most famous works: the Būstān in 1257 and the Gulistān in 1258. These two works of poetry and prose respectively, contain anecdotes from the life of the author, moral teachings, and advices for rulers. Many stories communicate elements of Sufi teachings through their dervish protagonists. Other works reflect the changing political situation in Shiraz. Several of his poems are dedicated to the Salghurid dynasty, which ruled in Fars from 1148 to 1282, while later works are addressed to their successors the Mongols and their administrators. 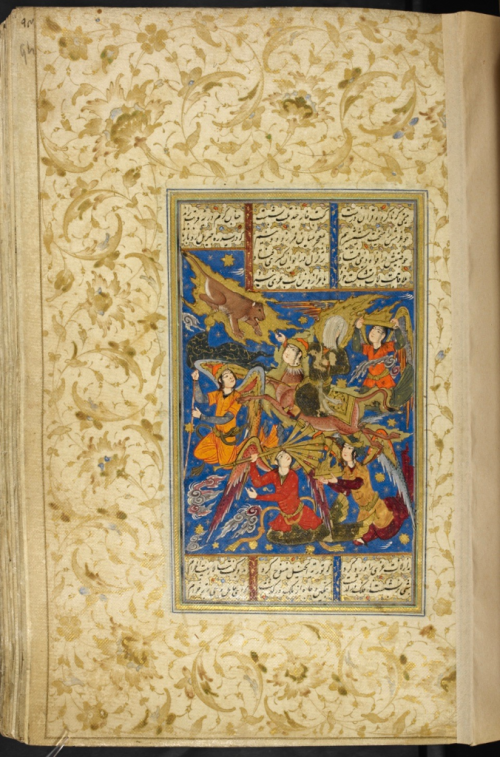 The heavenly journey (Miʻraj) of the Prophet mounted on Buraq approaching Leo and led by Gabriel with a green banner and Israfil with the seven-fold trumpet. From the beginning of the Būstān (BL IO Islamic 834, f. 94r)

This collection of Saʻdī’s work consists of 16 works that include, among others, the Gulistān and Būstān, Arabic and Persian Qaṣīdas (odes), Ghazals (love poems), Rubāʻīyāt (quatrains), and Khabīsāt (ʻnaughtyʼ poems). It has sumptuously illuminated openings and contains 18 paintings, including two double-paged illustrations (ff.1v-2r and 413v-414r). For details see Basil Robinson's catalogue description available here. 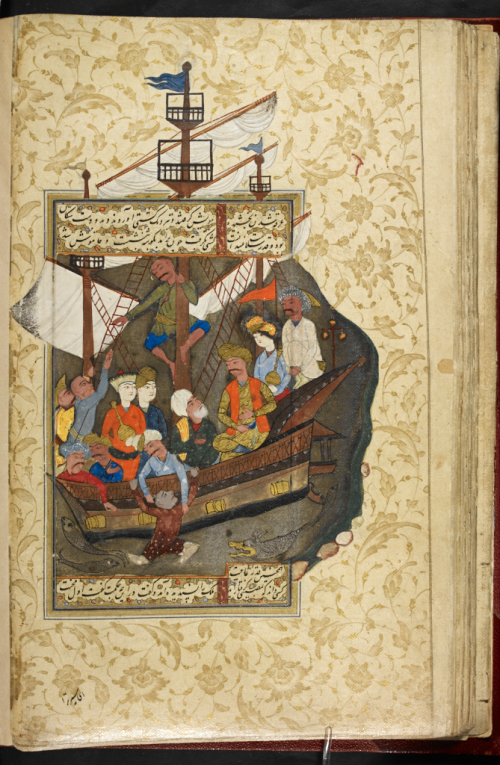 Illustration from the Gulistān. Here the King, possibly representing Shah ʻAbbas, is travelling with a slave who, never having been in a boat before, complained of seasickness. Following advice on how to keep him quiet, the king has him thrown overboard and ʻrescuedʼ, the moral being that safety can only be truly appreciated by one who has experienced disaster. The ship is based on a European model of the period, with three masts and cannon at the port-holes (BL IO Islamic 834, f. 42v) Illustration from the Khabīsāt (ʻnaughtyʼ poems) depicting a group of dervishes under a tree, one leading a handsome youth by the hand. The Khabīsāt (ff.391r-399r in this manuscript) is often omitted from printed editions of Saʻdī's collected works on account of its risqué nature (BL IO Islamic 834, f. 392r)

The illustrations are good examples of paintings of their time, but the illumination is of a much higher standard. Eight works have lavishly decorated openings: ff. 2v-3r, 34v-35r, 92v-93r, 175v-176r, 183v-184r, 223v-224r, 372v-373r, and 405v-406r. These consist of a central headpiece (sarlawḥ) and heading (ʻunvān) encased in ruled and decorated borders and a band containing foliate scrolling or alternating cartouches and quatrefoils. The outer margins are based on a pattern of diamond shaped lozenges or flower heads in red, black, brown and gold on a dark blue or gold ground with arabesque scrolls with pale blue, red and pink flowers. A variant contains flower heads which alternate with human and/or animal faces (ff.35-6, 175-6 and 372-3). 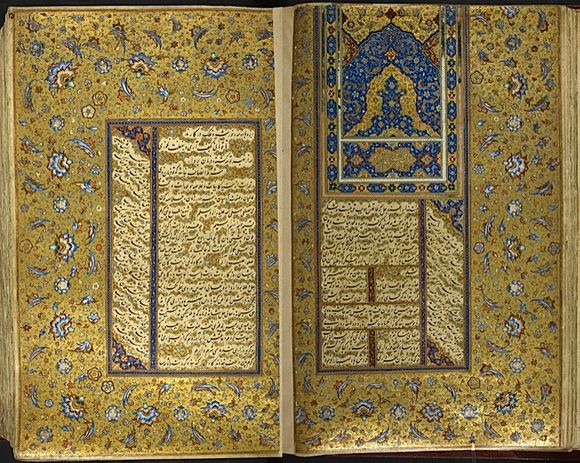 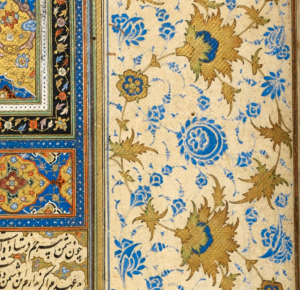 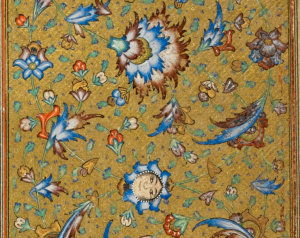 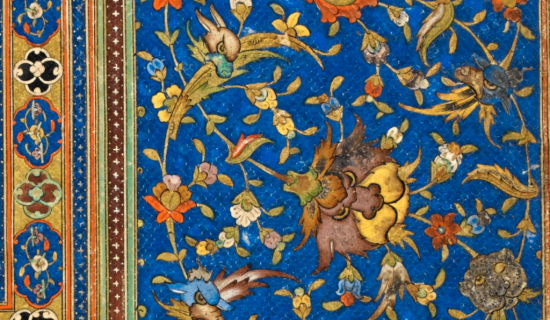 Details of illuminated openings on ff. 2v,  405v,  34v, and 175v. The faint grid marks are from gauzing which, regrettably, was regular conservation practice in the early-20th century (BL IO Islamic 843)

This manuscript was purchased in 1807 from the East India Company civil servant Richard Johnson (1753–1807). His collection formed the backbone of the newly established East India Company Library, consisting of 716 manuscripts, mostly Persian and Arabic, and 64 albums of paintings. Johnson left India in 1790  and did most of his collecting at Lucknow between 1780 and 1782 and at  Hyderabad between 1784 and 1875. This particular manuscript was no doubt purchased there having been taken to India at some point in the 17th century.

Posted by Ursula Sims-Williams at 5:09 AM