On display in the Treasures Gallery: Humayun’s meeting with Shah Tahmasp

In conjunction with the British Library’s Learning Team we recently held a very successful study day:  Mughal India: Art and Culture. To coincide with the event we have installed three new ʻMughalʼ manuscripts in the Sir John Ritblat Treasures Gallery. These are: A Royal copy of Nizami’s ‘Five poems’, dating from Herat, ca.1494 (Or. 6810, f. 3r), A mother rebukes her arrogant son, a copy of Saʻdi’s Būstān dated at Agra, 1629 (Add. 27262, f. 145r) and, the subject of my post today, Humayun received by the Safavid ruler Shah Tahmasp of Iran, from Abu’l-Fazl’s Akbarnāmah, dating from Agra, ca. 1602-3 (Or. 12988, f. 98r). All these manuscripts have been digitised and can be seen by following the hyperlinks. 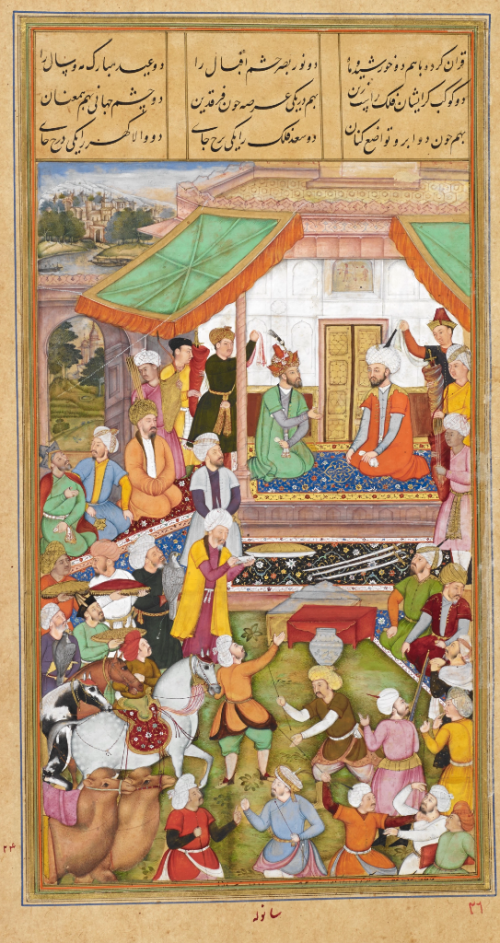 The Mughal Emperor Humayun's meeting with Shah Tahmasp of Iran in 1544 by the artist Sanvala, 1602-3. Note what are probably the painter's instructions partially covered in the lower margin (British Library Or. 12988, f. 98r)

The manuscript on display is the first of a three-part imperial set (Losty and Roy, pp. 58-70) of the Akbarnāmah ‘History of Akbar’, an official history written by the court historian Abu’l-Fazl.  This volume describes the reigns of Akbar’s predecessors and his childhood and contains 39 paintings ascribed to major artists of the imperial court. The copyist was the famous  calligrapher Muhammad Husayn Kashmiri[1]. A second volume of the same set is preserved in the Chester Beatty Library, Dublin (Indian Ms 3, see Leach, pp. 232-300). The painting is ascribed to the artist Sanvala and depicts the two monarchs meeting in July 1544. The setting, in a luxuriously furbished tent, includes a backdrop of distant snow-clad mountains, verdant pastures and a medieval city. Quoted above the painting are some typically bombastic verses by the Safavid poet Mirza Qasim Gunabadi [2] (Abu’l-Fazl, p. 81, Thackston's tanslation):

Two Lords of Conjunction meeting at one assembly like the sun and the moon,
Two lights of vision for the eye of fortune,  two blessed holidays for the month and year,
Two stars with which the firmament is adorned, together in one place like the Farqadain[3],
Two world eyes, rein to rein, bending toward each other like two eyebrows,
One constellation the location for two lucky stars in the firmament, one casket the place for two exalted pearls.

In 1530, the Mughal Emperor Humayun inherited an empire that was far from consolidated and after his decisive defeat by Sher Shah Suri at the battle of Kannauj in 1540 he was forced to retreat. He spent the next three years attempting to regain his position in Sindh during which he met and married Hamida Banu who gave birth to Akbar at Umarcot on 15 Oct 1542. Unsuccessful in Sindh and at the same time thwarted in his attempt to retreat to Kandahar he decided late in 1543 to seek the protection of the Safavid ruler Shah Tahmasp (r. 1524–1576), leaving the 15 month old Akbar behind with his relatives.

Humayun’s stay in Safavid Iran is described by Abu’l-Fazl in glowing terms almost as if it were a recommendation for TripAdvisor. Shah Tahmasp couldn't have been more delighted to host Humayun's visit and ordered drums to be beaten in celebration for three days in his capital Qazvin. Incredibly detailed instructions for Humayun's reception were sent to the Governor of Herat which included marmalades of Mashhad apples to be served after sherbet prepared with lemon syrup and chilled with ice and snow. Once the visitors reached Mashhad and were joined by the Shah’s amirs, 1,200 different dishes of food fit for a king were to be served at each meal!

After Noruz at Herat and much successful sightseeing, Humayun caught up with the Royal Camp between Abhar and Sultaniya and met the Shah in July 1544 in a ʻlofty palace, on which painters had long been at work executing marvels of their craftʼ (Abu’l-Fazl, p. 79). Princely celebrations were held daily and gifts exchanged. After several days the royal party moved on to Sultaniya where a hunt was organised. This was followed by two more hunting parties at the end of which Humayun was sent on his return journey accompanied by the Shah's son Prince Murad, 12,000 horsemen and 300 arms bearers from the Shah's own bodyguard. 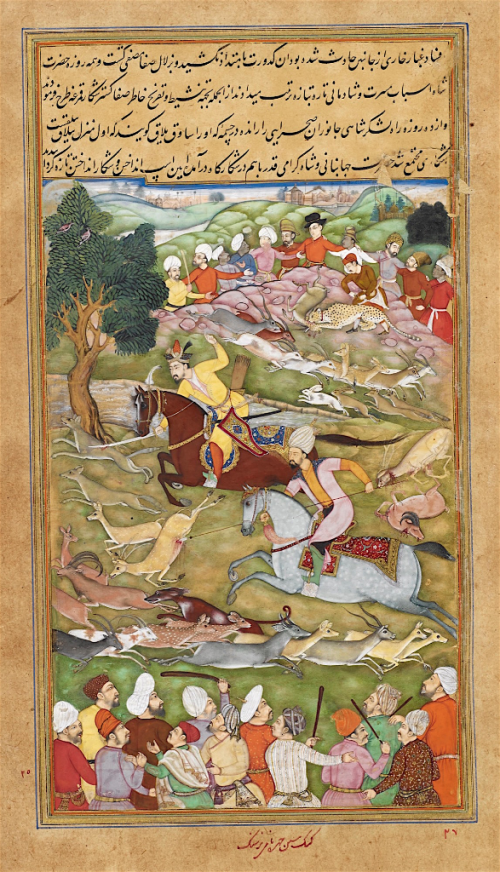 Apart from a brief moment of tension alluded to by Abu’l-Fazl in just two short sentences, it would seem that relations between the two rulers could not have been better. However a quite different impression is given in Tazkirat al-vāqi‘āt ‘Memoir of Events’, by Jawhar Aftabchi, Humayun's personal ewer-bearer, who accompanied Humayun in exile to Iran and during his subsequent struggle to regain the throne. Unlike the Akbarnamah which was an official chronicle of Akbar's reign, Jawhar’s account is a much more detailed record of events and to judge from his own references, he was always close to the Emperor and was therefore present at important conversations.

One of the first things Tahmasp asked Humayun, according to Jawhar, was whether he was willing to wear the tāj (the typical Safavid batonned headdress). He was happy to agree to this but the next day he was ordered to convert to Shiʻa Islam (Thackston, p.122):

Firewood had been gathered for an entertainment for the emperor. The shah sent a message, saying, ʻIf you embrace our religion, we will support you. Otherwise, we wonʼt. We will set fire to all the people of your religion with this kindling and burn you up!ʼ

As a staunch Sunni, Humayun initially refused but eventually agreed under duress, at least temporarily, and continued to enjoy his host’s generous hospitality. However Tahmasp had not apparently given up the idea of killing Humayun. On hearing his planned treachery Tahmasp's sister burst into tears. When he asked her why, she replied (Thackston, p. 126):

‘... you have enemies in all four directions: Ottomans, Uzbeks, Circassians, and Franks. It has been heard that Muhammad Humayun Padishah has a son and brothers. What will be gained by harming him? If you cannot have compassion on him and help to elevate and assist him, give him leave to go wherever he can.’ The shah listened to this. Immediately he cheered up and said, ‘All my amirs have been giving me their foolish advice, but none is better than what you have said.’

Another example of a situation saved by a woman! 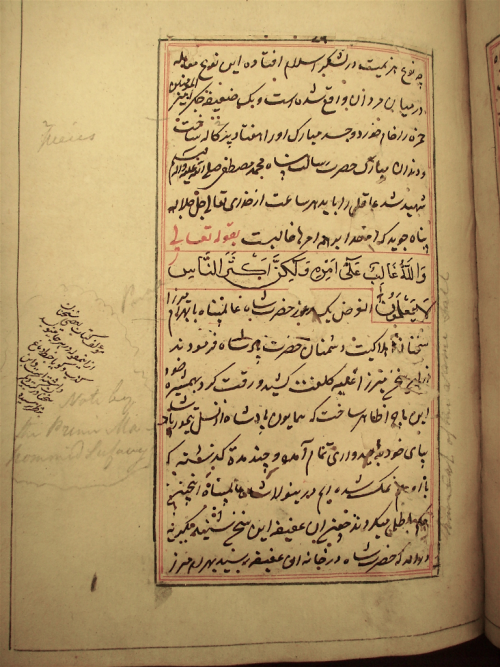 Passage from a copy dated 1610 of Jawhar's Tazkirat showing the passage describing Shah Tahmasp's proposed treachery with a marginal comment by the Safavid prince Sultan Muhammad Mirza (see below). The pencilled annotations are probably by Charles Stewart who published a translation of this manuscript in 1832 (British Library Add. 16711, f. 76r)

An interesting postscript to this story is told us by Charles Stewart who was lent this manuscript (Add. 16711) by his friend William Yule from whose estate it was acquired by the British Museum in 1847. Yule had suggested that he should publish a translation. He writes (Stewart, p. 70):

About the time that Major Yule procured this MS. there was a descendant of the Seffy family residing at Lucknow, who received a small pension from the Nuwab Assuf addowleh, and bore the title of Persian Prince. Major Yule having lent him the MS. he wrote on the margin at this passage [over Tahmasp's contemplated treachery, f.76r], ʻThe author has here been guilty of falsehood, or he must have been deranged, as this circumstance has never been mentioned by any other historian.ʼ

The Safavid prince concerned was Abu'l-Fath Sultan Muhammad Mirza Bahadur Khan Safavi, a son of  Shah Sultan Husayn II, who lived as a pensioner in Lucknow from 1793 or 4 until his death in 1816 or 17.

[1] The manuscript has no colophon but a damaged and over-pasted note by the Emperor Jahangir on f.1r mentions ʻthe musk-like string of pearls of …[cut off]…. Kashmiriʼ, which must surely refer to Muhammad Husayn Kashmiri zarrin-qalam. I thank S. Baburi for his help with this inscription.
[2] Author of a poetical history of Shah Ismaʻil Safavi. For more on him see C. Rieu, Catalogue of the Persian Manuscripts in the British Museum, vol. 2 (London, 1881), pp. 660-1.
[3] The two inseparable stars in Ursa minor.

Posted by Ursula Sims-Williams at 2:31 AM