Among the stateless peoples of the world, the Kurds are perhaps the most numerous. Although they are believed to have originated in central and western Iran, their current areas of concentration are largely located in one of four countries: Turkey, Iraq, Syria and Iran. Smaller communities exist elsewhere, including the small Caucasian state of Armenia. Here, Kurds make up the largest ethnic minority – 1.3% of the total population. They are largely speakers of a northern dialect of Kurmanji, the Kurdish language that dominates communities in Turkey, north-western Iraq and Syria. In contrast to the assimilationist policies of many of the other states under which Kurds find themselves, Soviet nationalities policy recognized the existence of a separate Kurdish nation and, at least in theory, supported its cultural and social development. While Kurds in Turkey or Iraq were barred from giving their children Kurdish names, celebrating Nowruz or, at the most extreme, using the letters X or W (which do not figure into Turkish phonology, but do appear in Kurdish), Soviet Armenia’s Kurds had access to state-funded mother-tongue education. 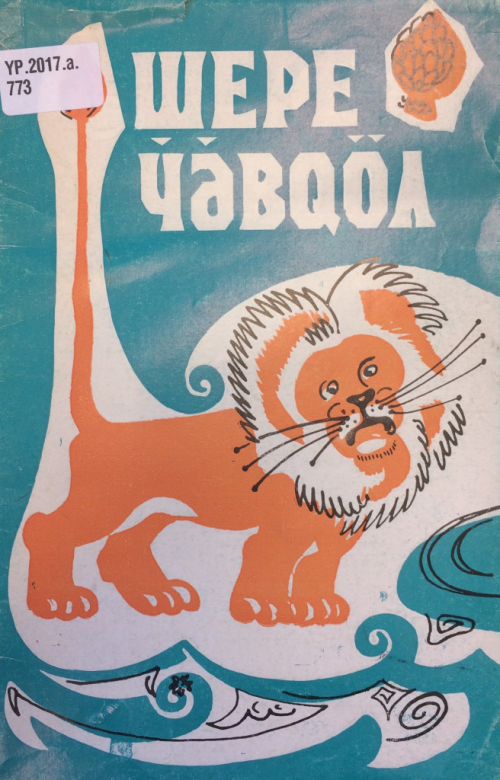 Nevertheless, Kurds faced the same ups and downs of nationality policies that affected many of the other national minorities in the USSR. Among these were the codification, and re-codification, of the Kurdish language throughout the 1920s, 30s and 40s. In the early 1920s, Armenian letters were first used for Kurdish, although this was abandoned in favour of the Latin alphabet in 1927. Among the Kurdish titles from Armenia held by the British Library, Қteba Zmane Kyrmançi, a reader for native Kurdish-speaking 4th year students from 1933 (14997.b.20), shows us the second stage of this journey. The work is written in a modified Latin script similar to those employed for Turkic languages within the Soviet Union during the same period. The idea was to create a uniform representative of the phonemics – the underlying sounds – of each of the languages to which it was applied. There is therefore no attempt at harmonizing this Latin-script Kurmanji with similar dialects further south in Turkey or Syria. This is understandable, given that the goal of Soviet linguists and central planners was not linguistic unification, but rather socio-economic unification leading to the creation of one, unitary Soviet nation. 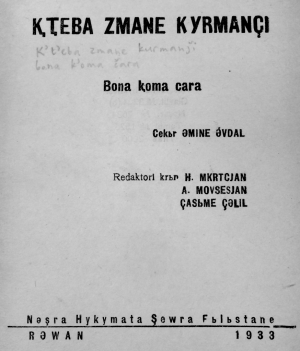 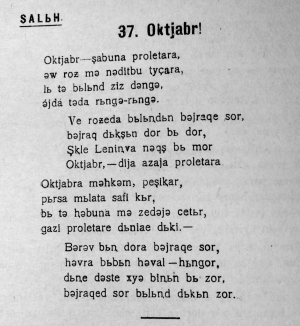 This is even more evident when we look at the content of the readers, rather than their form. Although the reader dates from the first five years of Stalin’s reign, it already shows the hallmarks of the “National in form, Socialist in content” ethos of Stalinist nationalities management. Poems about October (an allusion to the October Revolution that brought the Bolsheviks to power) mingle with illustrated folk tales and traditional stories. Children are entertained with pictures of warriors, bandits and princes in traditional Kurdish garb while also reminded that “Oktjabr – şabuna proletara” (October is the rebirth of the proletariat), and that “Bǝjraqed sor bьlьnd dьkьn zor” (Many will raise red flags). The 1933 reader is clear proof that the codification and standardization of a language – albeit within the confines of the Soviet state – could be used to serve a cause other than nationalism. 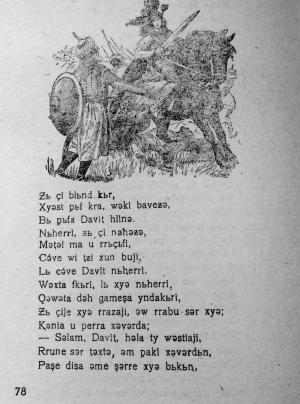 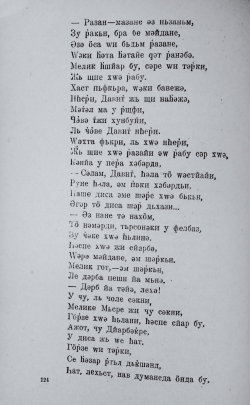 The author of this particular reader, Eminê Evdal, evidently survived the ravages of the Great Purge and the Second World War, and continued writing in Kurdish – this time in the Cyrillic alphabet – in the 1950s, 60s and 70s. The Library holds a number of his poetry collections, including Memê û Zinê (14997.f.63), the name of one of the stories in the 1933 reader, and P’êrişan (14997.f.51), as well as other readers for the fourth year of classes at Kurdish schools in Soviet Armenia. In the 1957 edition (14997.b.27) the poem Oktjabr is no longer present. In its stead is Lenin, written by C. Genco. It is a panegyric to the father of the Soviet Union, complete with sketched portrait. Evdal’s poem Şerê Davit did survive the decades, and thanks to the copy held by the British Library, we can compare the 1933 and 1957 versions, picking out the orthographic, syntactic and semantic deletions and additions, while also marveling at the sheer visual differences between the Latin and Cyrillic renderings of Kurmanji. 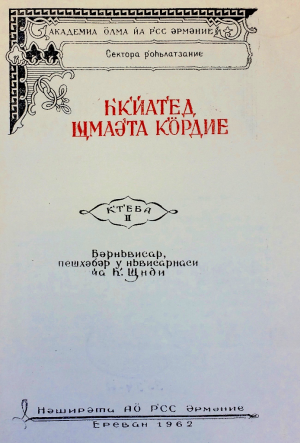 During the 1960s, the task of compiling readers for a new generation of Kurdish-language students fell to Hajie Jndi, one of Soviet Armenia’s most prolific Kurdish authors. His H’k’yated Jimaeta K’urdî (YP.2016.a.666) contains a wealth of Kurdish folktales, short stories, poems and the like, all rendered in proper Cyrillic Kurdish. They are sanitized of any suspect ideological components, and occasionally illustrated to bring home a particular point. These collections, by a man who is believed to have authored some 110 books, articles, studies and other written works, demonstrate the central role played by Kurdish folk culture in identity-formation processes for Kurdish communities, even in the nominally post-national Soviet Union. 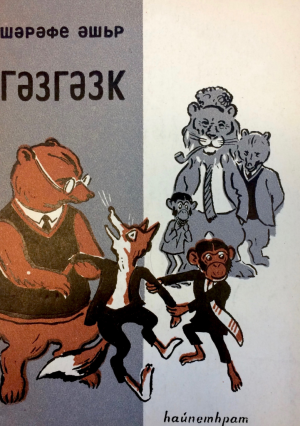 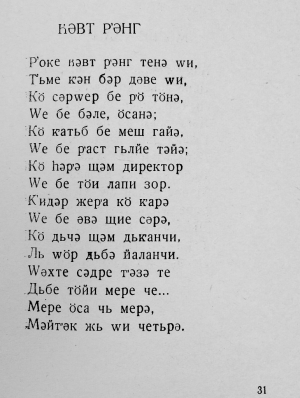 Part of the process of countering overly nationalistic content was the heavy reliance on ideological and class-conscious elements within the compositions. Other items held by the Library show the extent to which Marxist-Leninist ideas were woven into children’s stories and poems. In the anthology entitled Gezgezk (Nettle) (YP.2017.a.770), personified animals on the cover clue us into the allegorical nature of these poems and stories. We see a monkey and a bear dragging off a wolf – an animal that Soviet children would soon become acquainted with as an underhanded cheater, thanks to the cartoon Nu, Pogodi!, which first aired in 1969. Gezgezk contains simple poems that introduce children to meter, rhyme, prosody and an expanded vocabulary of the Kurdish language, while also indoctrinating them with State-sponsored ideology. Animals and villagers were indeed favourite means of doing this, as we can see in another anthology of children’s poetry held by the Library, Şêrê Çevqul (The Greedy Lion) (YP.2017.a.773). This collection includes works such as Ker û Ga (Ass and Cow), and Padşa û Gundi (King and Village), both of which harken to the rural imagination generally contained in Kurdish folktales and other oral literature, while also hammering home core components of the Socialist struggle. 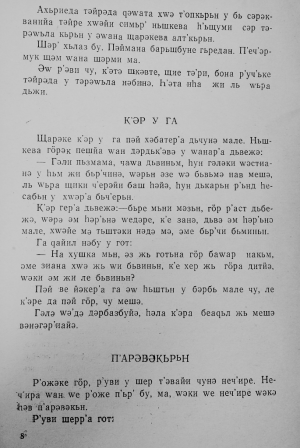 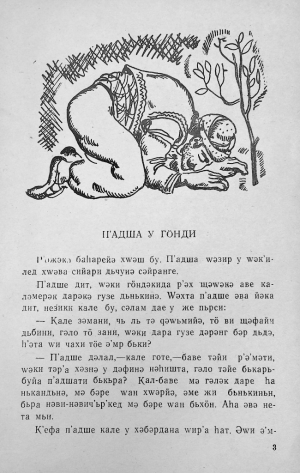 Ker u Ga, an allegorical story about an ass and a cow and Padsha u Gondi, a Socialist-tinged tale about a King and a village (YP.2017.a.773) © Hamoê Ȓizgo

Kurdish children’s literature from Soviet Armenia provides us with a valuable component to understanding a culture fractured along linguistic, political, social and economic lines. Although numerically small, the publishing history of Armenia’s Kurds highlights the importance of education as an agent of reproduction of both national culture and language, and State-sponsored ideologies. While the Kurds of Turkey, Syria, Iraq and Iran faced severe restrictions on the use and propagation of their native language, those living in the Soviet Union were able to transform fully their mother tongue into a literary standard. In spite of this, the Socialist, anti-nationalist content of the materials produced kept the core of the struggle for cultural and political self-determination far to the south of Armenia, paving the way for these publications to become relics of a parochial, historically bounded arena of Kurdish cultural production.