Take a feather and a candle: why thorough spring cleaning is so important

Looking through our collection of digitised Hebrew illuminated manuscripts, you may have noticed that amongst all of the biblical scenes and decorative letters, there are scenes of families cleaning their houses. Given the same spatial importance of scenes of lofty figures like Abraham and Moses, these scenes jump out to modern eyes as they seem to show families cleaning their homes together, with the men helping out with the housework too. 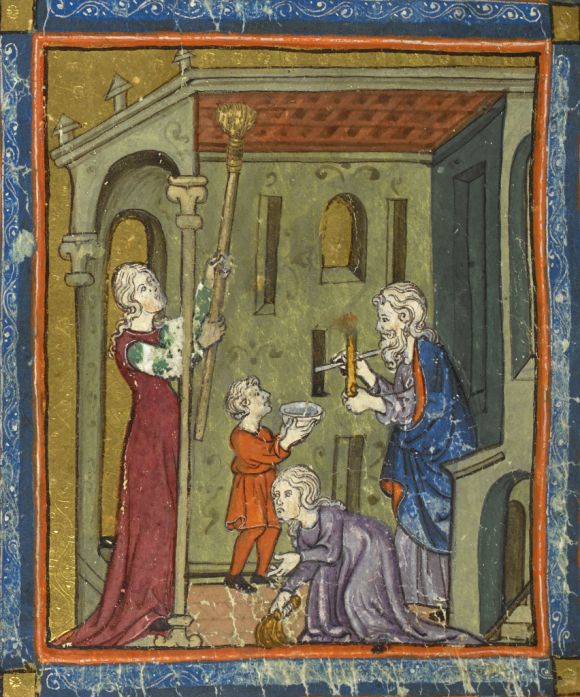 These manuscripts are all examples of a type of Hebrew book called a Haggadah. The Haggadah is a service book used in Jewish households during the ritual meal on Passover. Originally included in the text of Jewish prayer books, the Haggadah became an independent unit around the end of the 13th century. The Hebrew manuscript collection at the British Library features many illuminated Haggadot from the late 13th/early 14th century, mainly from Spain. These Haggadot have now been digitised thanks to the generous support of The Polonsky Foundation.

Part of what makes them so charming and historically significant, is that they show contemporary domestic scenes, presumably of the families who commissioned and owned the manuscripts. While obviously they aren’t snapshots of reality, they are depictions of how the families wanted to represent themselves.

If you look more closely at the images, you can see the women sweeping the surfaces, and the man looking into a cupboard and sweeping it clean with a feather, and a young boy holding a small bowl to catch the crumbs. He is also holding a candle, helping him to see into the dark corners. Candles, feathers and bowls are not necessary part of the standard medieval dustpan and brush set; they represent a very specific part of the Jewish customs surrounding Passover. These scenes are faithful representations the Jewish commandment to look for hamets (leaven) on the eve of Passover.

Leaven, or hamets refers to foods which are forbidden on the Jewish holiday of Passover. Based on the Exodus from Egypt when the Israelites did not have time to let their bread rise, grains that have been mixed with water and left to start the leavening process are not permitted to be eaten or possessed during the week-long festival. Indeed there is a specific commandment to remove all hamets from one’s home. This work must take place before midday on the 14th of the Jewish month of Nisan. In 2017, that date falls on Monday the 10th of April. 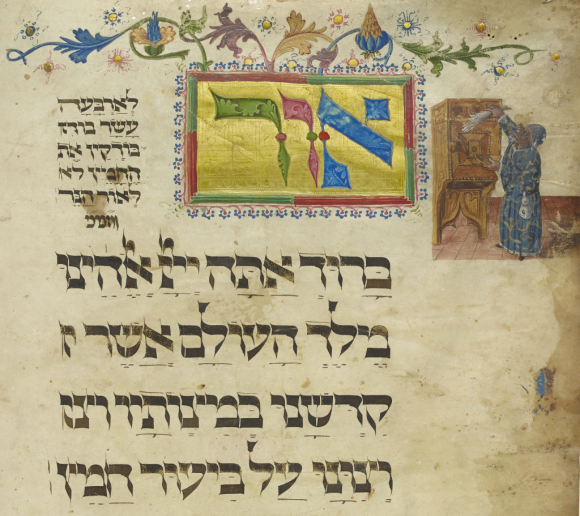 Look at the fifteenth-century Ashkenazi Haggadah (Add MS 14762). Right at the beginning, you can see a man sweeping a cupboard clean with a feather and gathering the crumbs into a small bowl. He is richly dressed with lavish robes and money belt, clearly the head of his family and not a servant. The main text on the same page is the blessing that should traditionally be recited before this ritual search for crumbs:

On the eve of the fourteenth [of Nisan] one searches [the house] for leaven by the light of a candle and says the blessing: “Blessed are You, God, our Lord, King of the universe, who has sanctified us by His commandments and commanded us about removing the leaven.” 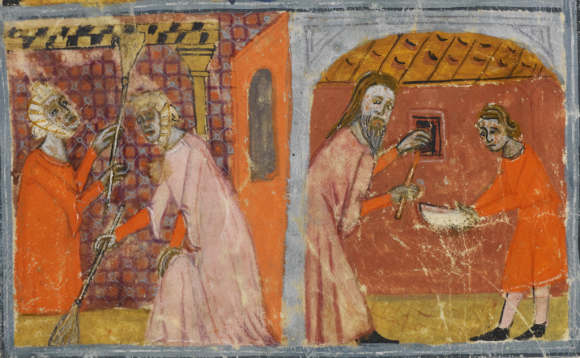 Sister Haggadah. Barcelona, Spain, 2nd or 3rd quarter of the 14th century. Similar to the Golden Haggadah, the female members of the family are sweeping the house from floor to ceiling, while the head of the family is sweeping the cupboards and brushing crumbs into a bowl held by a small boy. Full manuscript can be viewed online here (British Library Or.2884 f.17r )

What makes these images so interesting is that they don’t only show the action of the cleaning, but also the specific detail within the ritual as describe in Jewish law. The Shulhan Arukh, (one of the most important Jewish legal codes) emphasises that first and foremost it is the house owner’s responsibility to search for the leaven. Even if he asks a member of his household to help, ideally he should say the blessing and he should participate in the search. (SA, Orah hayim, 432). Jewish tradition also specifies the use of the candle, feather, and wooden bowl or spoon. The candle is necessary, because it gives enough light in the evening to look for crumbs in the small cracks and holes of the house (SA, Orah hayim, 433).

Some of the manuscripts also show what to do with all of the hamets crumbs after you have found them. 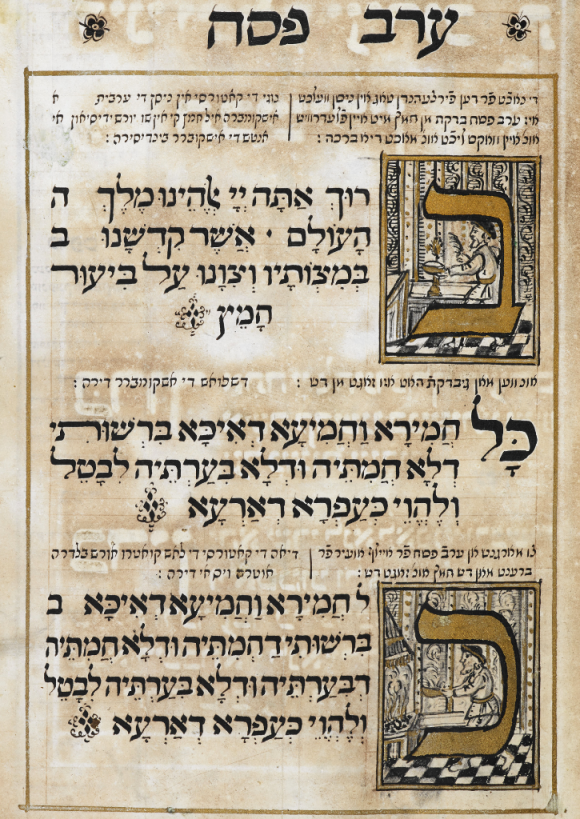 You have to burn them! Just have a look at the relevant page from this eighteenth- century Haggadah. In the upper part of the page we find the blessing for the searching for the leaven, while underneath an Aramaic statement, which one recites to nullify the leaven which might still be in his possession that hasn’t been found:

In the initial word of Barukh (Blessed), we can see a man searching for the leaven with the help of a feather, a bowl and a candle. In the initial word of Kol (All), we find the same man busy burning in the fireplace what he found. It is thought that the use of the wooden vessel to sweep the crumbs into was practical for this stage, as it could be burnt even if no hamets had been found, allowing this ritual to still be performed. 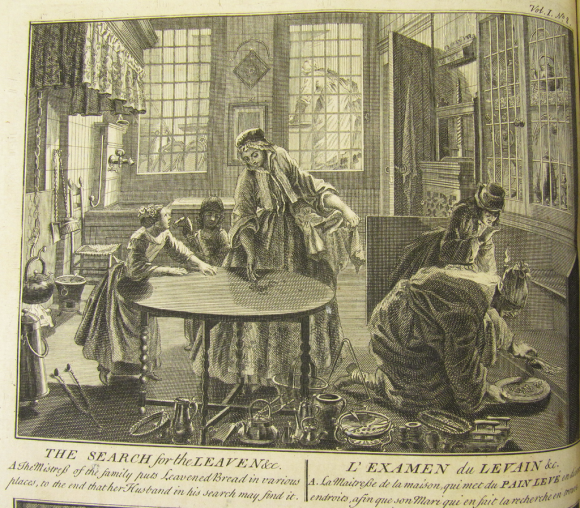 The Ceremonies and Religious Customs of the Various Nations. Published in 1733 by Jean Frédéric Bernard with etchings by Bernard Picart. It was reprinted several more times during the 18th century, and translated into 5 languages. This image is from the 1733 London edition (British Library 878.l.2)

This ‘spring clean’ ritual of searching for the hamets drew the attention of non-Jewish artists as well. In one of the great publishing enterprises of the Enlightenment period, The Ceremonies and Religious Customs of the Various Nations, one of the two images devoted to Passover is the depiction of the Searching for Leaven. It is interesting that with all of the different rituals and complexities surrounding Passover, like with the Hebrew manuscripts, this ritual was considered so important to depict. The illustrations were designed by Bernard Picart, who relied heavily on his own observations of the Sefardic Jewish community of Amsterdam.

In the context of the Haggadah, these images may have served as visual aids, instructions for the family on the precise nature of the tradition, a kind of non-textual manual. But they could also have served as a kind of self-representation. Could it have been that a whole family cleaning their house together was so unusual? Or was it just that this particular scene was such a good example of the detail and specificity within Jewish law, and how families ensured that people knew how strictly they were adhering to it? 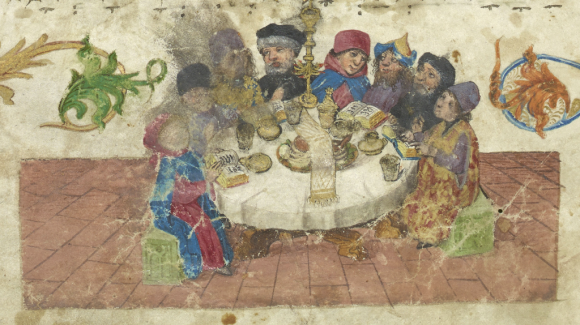 After the spring-cleaning, the family is able to sit down to their Passover meal, read their Haggadah, and drink wine. They’ve earned it!