The Burmese manuscript collection in the British Library consists of approximately 1800 manuscripts. The majority are written on palm leaf, but there are also many paper folding books (parabaik), and texts written on diverse materials such as gold, silver, copper and ivory sheets in the shape of palm leaves. The collection is particularly strong in historical, legal and grammatical texts, and in illustrated material. In particular, there are many folding books with illustrations of the Life of the Buddha, Jataka stories, court scenes and other subjects.

Royal entertainments: In the above scene, a musical troupe is entertaining the royals. To the left, the royal party is seated under a canopy watching a Burmese classical dance (Zat pwe), while to the right are dancers and musicians accompanied by an orchestra (Saing waing). Zat taw gyi or zat pwe is usually based on Jataka stories, which are the most popular literary sources throughout all periods of Burmese history. British Library, Or.16761, f.28r

The manuscripts derive from two historic sources, the British Museum and the India Office Library, and were mostly brought from Burma by travellers, envoys, missionaries, administrators and researchers. From the British Museum came the John Murray collection, acquired in 1842, which includes several manuscripts from Arakan dating from the 1740s, and the Sir Arthur Phayre collection, acquired in 1886. The India Office Library collection of Burmese manuscripts began with the Royal Mandalay Collection acquired in 1886 after the Anglo-Burmese war, and a collection of official documents formed by Henry Burney which was probably presented to the Library by Burney himself. Catalogues of all the Burmese manuscripts are available in the Asian and African Studies Reading Room, and about 700 manuscripts in Burmese and and in Pali in Burmese script can be found in the online catalogue Explore Archives and Manuscripts. 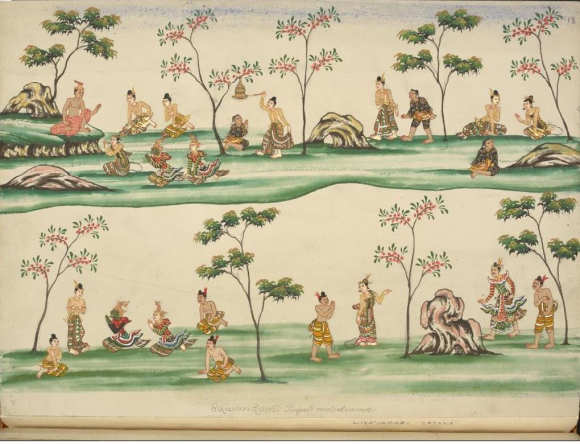 The royal melodrama Vijayakari zat: In the eighteenth century Burmese drama flourished at the royal court, and the earliest play, Maniket Pyazat, was written in 1733 by the court poet Padesaraja (1684-1752), based on his own poem Maniket Pyo. Burmese court drama really began to develop at the beginning of the reign of King Bodawpaya (1782-1819). Court dramatists, such as U Ponnya (1807-1866) and U Kyin U (1819-1853), produced dramatic works during the reign of Bagyidaw. Hlaing Hteik Khaung Tin, the Crown Princess (1833-1875) in the reign of King Mindon, wrote court dramas such as Vijayakari and Indavamsa, but she earned particular fame for her romantic dramas. In the scene shown above, there is a tree in a magical forest where lovely maidens grow and wait to be plucked. This drama is about Prince Vijayakari, Sakanitum (a princess born from a flower bud), and Adideva of the Ogre Kingdom. These court dramatists wrote delightful romances which are marvels of literary art. Only a few of their works survive to the present day but these are still widely read and studied. British Library, Or.3676, f.13r 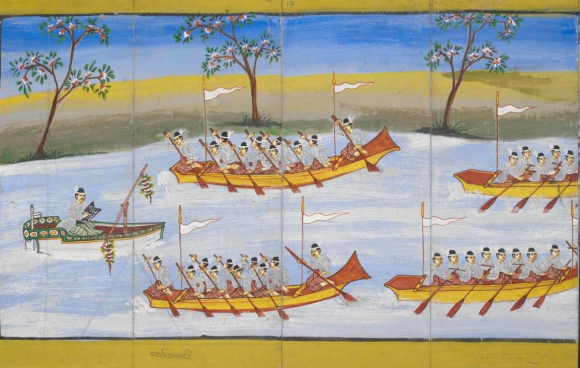 Regatta festival: There are many Burmese festivals throughout the year. Tawthalin (September) is the sixth month in the Burmese calendar and the third month of the rainy season in Burma. The rain becomes less frequent, there is sunshine with clear skies, no wind, and the surfaces of the rivers are smooth without waves. The season is just right for holding regatta festivals, which have traditionally been held in this month since the times of ancient Burmese kings, and the regatta festival remains one of the twelve monthly festivals in the Burmese calendar. Regattas were not only occasions for pageantry but also opportunities for demonstrating the naval prowess of the armed forces. In the olden days, the royal family sent their own boats to participate in the race, and high officials were placed in charge of preparations for boat races held along the shores of rivers throughout the country. British Library, Or.15021, f.16r 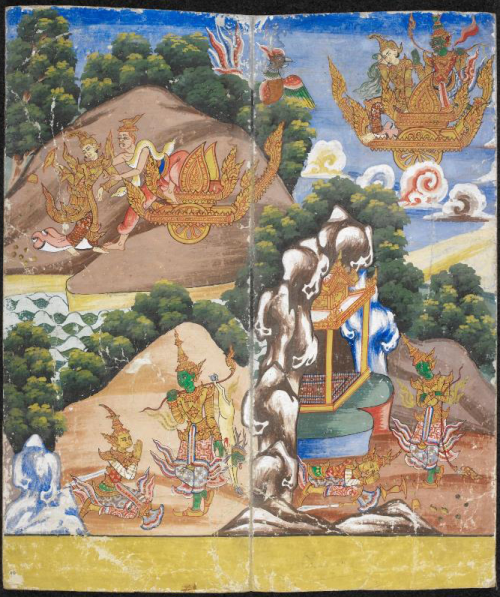 Scenes from the Ramayana: Ravana, in disguise as a hermit, begs Sita to come with him to his kingdom. When she refuses, Ravana summons his magic chariot and sweeps Sita up and away, into the sky and over the forests (top). When Rama and Lakshmana finally find their way home Sita is gone (bottom). British Library, Or. 14178, f. 10