Elephants have played an important part in many Asian civilisations since ancient times, for once they could be brought under control, their gigantic physical appearance and wild temperament were regarded as great assets. In China, war elephants appeared from at least as early as the Shang Dynasty (1723-1123 BC) (Kistler 2006: 8). They were respected both for their awe-inspiring size and for their difficult behaviour, which in turn helped to secure the position at the top of those kings who succeeded in controlling the beasts (Trautmann 2015: 68-69). In India, from as early as 1000 BC in the later Vedic period, elephants were domesticated and became a very valuable resource for kings and rulers in the northern states, especially for use in battle, and information on domesticating elephants was recorded in Gajasastra or elephant knowledge manuals. In Hinduism the pachyderms are regarded as sacred animals since the god Indra chose a celestial elephant named Airavana as his animal mount, or vahana (Trautmann 2015: 100). 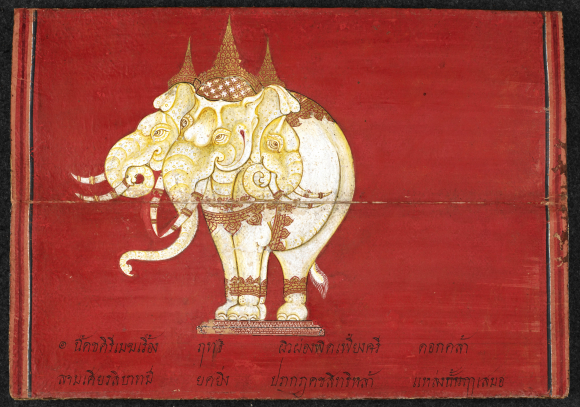 The Indian epic Ramayana also portrays elephants as an important part of kingship. It mentions the relationship between kings and elephants, and the duty of the royals to attend to the needs of the elephants (Trautmann 2015: 50-51). Ayodhaya, the royal city of Rama, was full of horses and elephants, and according to early Buddhist texts, King Bimbisara of Magadha (558-491 BC) possessed a well-trained elephant corps (Kistler 2006: 21) .

The idea of the royal use of elephants, war elephants and elephant training techniques gradually spread from India to the kingdoms of Southeast Asia. In Vietnam, as early as AD 40, the two Trưng sisters, Trưng Trắc and Trưng Nhị, led a victorious but short-lived rebellion against the Chinese Han ruler before they were suppressed in AD 42. The two Trưng sisters, who were killed in the war, have been depicted in Vietnamese history as warriors riding on elephants to fight against the Chinese Han.  Since then they have become national heroines and a symbol of resistance against foreign rule and domination. 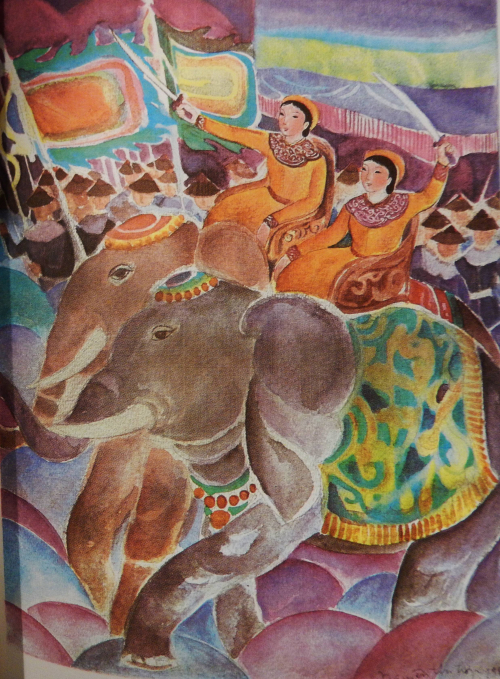 Elephants played an essential role in traditional warfare in Southeast Asia. Not only were they the main war machines but they could also instigate war, especially if they were “white elephants”. In many traditional kingdoms in Southeast Asia, “white elephants” received royal treatment and carried the king. In reality “white elephants” are simply albino elephants, but they are extremely rare. Some white elephants which simply had pale colorations or certain spots and other characteristics were deemed to be “auspicious” and beautiful, and were believed to be especially blessed by the gods. This belief may also be related to the Hindu myth which describes Airavana, Indra’s mount, as a white elephant. Rulers sometimes competed for ownership of such white elephants, and these ownership contests could be used as pretexts for declaring war (Kistler 2006: 178-9).

Just as the Vietnamese honour the Trưng sisters, so the Thais regard highly Queen Suriyothai and her daughter, Princess Boromdilok, for their bravery and sacrifice. According to Thai chronicles, Queen Suriyothai gave up her life to protect her husband King Maha Chakkraphat, who was engaged in an elephant fight with the Burmese Viceroy of Prome during the rise of the Tongoo dynasty of Burma in 1548. She dressed as a male soldier on a war elephant and decided to block the Viceroy of Prome from charging her husband, but was killed by a single blow from the Viceroy’s spear, together with her daughter. Between 1563 and 1564 the Burmese kingdom of the Toungoo Dynasty and the Thai kingdom of Ayutthaya were engaged in another war, this time over white elephants. King Bayinnaung of the Toungoo demanded that King Maha Chakkraphat of Ayutthaya send two of his white elephants to Burma as tribute, but Maha Chakkraphat refused, and hence war broke out. Ayutthaya could not withstand the power of the Burmese army, and eventually a peace deal was agreed in which one of the Siamese king’s princes was taken hostage to Burma, and Ayutthaya also had to give four white elephants to the Burmese king. In addition, Siam had to send thirty elephants and a substantial amount of silver to Burma annually. Ayutthaya was also reduced in status to a vassal state to the Burmese kingdom.

According to Thai historical sources, Siamese pride was only restored by King Naresuan, the grandson of King Maha Chakkraphat, when he won an elephant duel between himself and Mingyi Swa, Bayinnaung’s grandson, in 1593. In foreign source material the actual elephant duel was not mentioned but there was definitely an elephant battle between Naresuan and the Burmese troops. Similar conflicts over white elephants took place in other traditional Southeast Asian kingdoms. For example, around the 1470s, Emperor Lê Thánh Tông of the Đại Việt kingdom waged a war against the Lan Xang kingdom (literarily translated as 'kingdom of a million elephants', located in modern Laos) after his request for a gift of a hair of the white elephant of King Chakkaphat of Lan Xang was rejected. 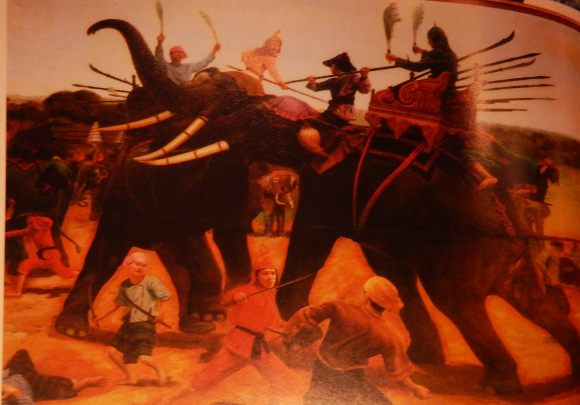 Elephants have no place in modern world warfare; nevertheless Southeast Asians still have a strong sense of their power and role in society. In Thailand an annual elephant round up is organised in Surin province in north-eastern Thailand. This festival was an important royal event during the Ayutthaya period, when wild elephants were hunted, tamed and trained to be used as working or war animals. In Thanh Hóa province in northern Vietnam, an elephant battle festival or Trò Chiềng has been revived recently. This festival commemorates and honours General Trịnh Quốc Bảo, who adopted war tactics in his fight against the enemy in the 11th century.  He had elephants made out of bamboo, glued fireworks to them, and then burnt them in the battle against the enemy’s elephant troops. This spectacular and original strategy may well have contributed to his victory.