The British Library has recently digitised two important manuscripts relating to the Okinawan language (click on hyperlink to get to digital copies): English-Loochooan dictionary: with many phrases in the higher style of the literati, and a glossary of derivatives from the Chinese language (BL Or.40) and Elements or contributions towards a Loochooan & Japanese grammar (BL Or.41), written by the missionary Bernard Jean Bettelheim (1811-1870) and presented to the British Museum on 2 May 1867. 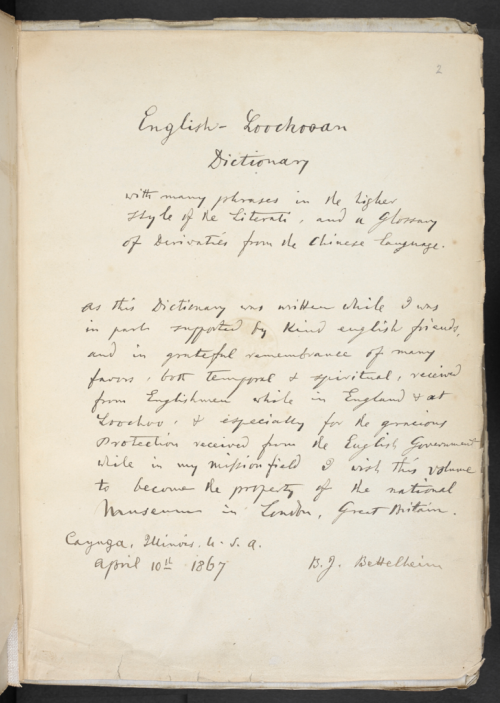 As this dictionary was written while I was in part supported by kind English friends, and in grateful remembrance of many favors, both temporal and spiritual, recevied from Englishmen while in England & at Loochoo & especially for the gracious protection received from the English Government while in my mission field I wish this volume to become the property of the national museum in London, Great Britain. Cayuga, Illinois, U.S.A., Apr 10th 1867.

Bettelheim’s career
Bettelheim, the first Protestant missionary in what was then the independent Kingdom of Ryukyu (technically a tributary state of Qing China but de facto under the control of the Satsuma Domain on behalf of the Japanese Shogunate), was born in June 1811 in Pressburg (Bratislava) of Jewish descent. He was educated in Budapest and Vienna before moving to Italy where he obtained a doctorate of medicine at the University of Padua in September 1836. He converted from Judaism to Christianity in 1840 while serving as a military surgeon in Smyrna. Some months later he moved to London where in 1843 he married an Englishwoman, Elizabeth Mary Barwick (1821-1872), and took British nationality. The same year he joined the ‘Loochoo Naval Mission’, founded by Lt. Herbert Clifford, as a lay preacher and medical missionary, and on 1 May 1846 he arrived in Naha, Okinawa on board the ‘Starling’ accompanied by his wife and their two young children. 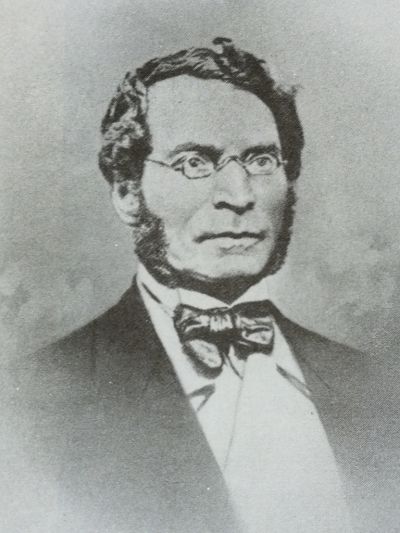 From the outset Bettelheim met with strong opposition from the local authorities and he and his family endured many slights and hardships. His efforts to preach were disrupted by officials and according to one account, ‘People even went so far as to put buckets of filth at his feet while he was speaking’ (Pierre Leturdu, quoted by Cary, p.23). Nevertheless Bettelheim remained in Ryukyu for eight years, working as a missionary, using his medical skills to treat the sick, studying the Okinawan (or ‘Loochooan’ language)[1] and translating parts of the Bible. Throughout these years he maintained a detailed journal which chronicles his trials, tribulations and successes as well as providing a vivid account of life in Ryukyu at that time. Bettelheim finally left Okinawa, to the relief of the authorities, aboard an American warship (part of Commodore Matthew Perry's fleet) in July 1854 and went to Hong Kong where his translations of the Gospels of St Luke and St John, and of the Acts of the Apostles and Romans were published in 1855 at the instigation of George Smith (1815-1871), Anglican Bishop of Victoria.

From Hong Kong Bettelheim moved to the USA, settling in New York. During the Civil War he served as an army doctor and was living in Cayuga, Illinois when he presented his works to the British Museum. He died of pneumonia in Brookfield, Missouri on 9 February 1870. In 1926 to commemorate the 80th anniversary of his arrival, a memorial was erected on the site of his former home in the precincts of the Gokokuji Temple in Naha. Although it was destroyed in World War II, a new memorial has since been set up. 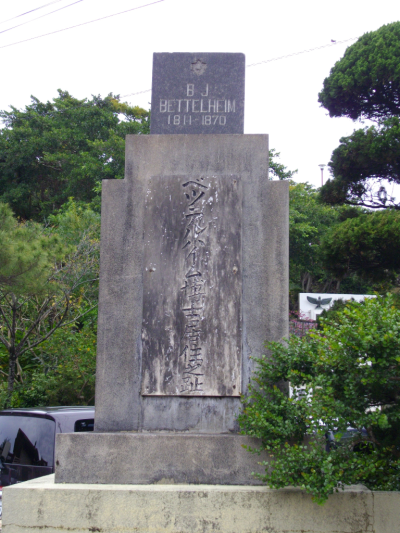 Bettelheim was a controversial figure both in his own day and since, with biographers disagreeing over his personality, importance and legacy. His presence was a source of constant irritation to the Ryukyu authorities and his journal details the hardships he faced. His success as a missionary appears to have been limited - according to the highly critical account by George Kerr, he made just ‘one avowed convert in seven years’ (Kerr, p. 288). However, Earl Bull, a Methodist missionary in Okinawa, considered him a remarkable and self-sacrificing man but one who was ‘not fitted temperamentally to be a successful missionary’ (Bull, p. 122). Otis Cary said of Bettelheim, ‘The Kingdom of God is not to be built up by the disregard of the rights of others, and it is to be questioned whether its progress was not retarded rather than hastened by what was done in Loochoo’ (Cary, p.22). One of his more sympathetic critics, Anthony Jenkins, who edited his voluminous journal, wrote ‘A man of science, linguistics, theology, music and even amateur aesthetics, Bettelheim was one who whose brilliance was parallelled by self-importance’ (Jenkins, p.viii).

Grammar and Dictionary
When he arrived in Ryukyu, Bettelheim had very few resources to assist him in his efforts to learn the language. He had a copy of Medhurst’s Japanese-English Dictionary [2], Karl Gützlaff’s Japanese translations of portions of the Bible, and a glossary of Okinawan compiled by Clifford in 1818 which Bettelheim found to be full of mistakes. In his study of the local language, therefore, he was compelled to start from scratch, relying principally on what he could learn from the Okinawans themselves.

Bettelheim set to work on compiling his grammar shortly after his arrival. The British Library’s manuscript has a preface dated 4 September 1849 but as early as 10 September 1846 he noted in his journal that he had ‘already begun to collect notes towards a grammar of the Loochooan’. Work on the dictionary must have begun around the same time for by 20 March 1847 he wrote in the Dictionary ‘I am at “Brib”’. His linguistic labours continued for five years until finally he recorded in his journal - with a characteristic lack of modesty (Jenkins, Vol. I p.616):

25 Dec 1851 … the greatest entry of this day, yea The Greatest Entry of the Year I have to make is that the Dictionary is finished. Thanks be to God for patience & health given to accomplish such arduous work. With such materials as I had, I am sure never man wrote such Dictionary. And I am equally sure, notwithstanding all the defects the work may have, the degree of completeness to which it is brought was never given to a dictionary by one man [….] What a beastly labour of hand & back bending, besides mental toil & anxiety. 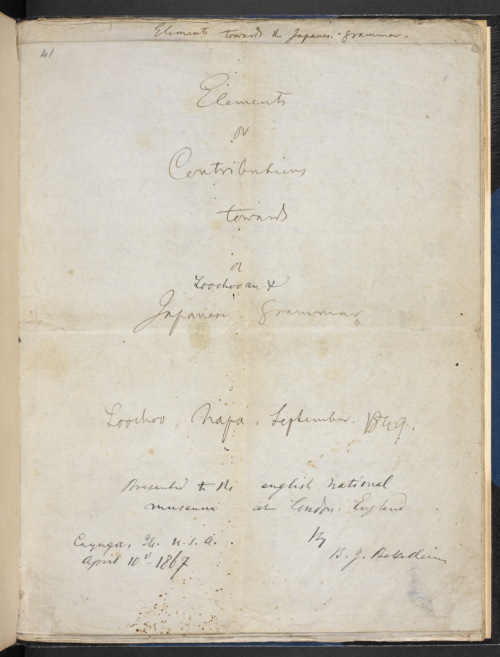 The status of Okinawan as an independent language or as a dialect of Japanese has been much debated. It seems Bettelheim himself was confused at times - the title page of his grammar shows that the original title was Elements or contributions towards a Japanese grammar with ‘Loochooan &’ being added later. In his preface he writes ‘I have never been in Japan nor did I hear natives from Japan speak more than three times, we being entirely prevented from coming into contact with those arriving here’. Nevertheless he states:

From a regular comparison between our language spoken here, and that contained in the books referred to [3], I hope I am not at all mistaken in calling ours Japanese, with the exception of a trifling difference between the sounds’. He concludes that ‘though there may be,as in any other language there are, dialectic differences in the Japanese, and that therefore a Yedoman [4] may as much differ from a Shuri-samuré as a London Cockney does from a broadmouthed Scotchman, yet the language of both to all ends and purposes is the same, and they will be able to understand and converse with each other.

Perhaps he later came to change his mind and added ‘Loochooan’ to the title when presenting the manuscript to the British Museum.

Following the annexation of Ryukyu by Japan, the Ryukyuan languages were customarily regarded as Japanese dialects. They are now recognised as independent languages belonging to the Japonic language family, related to – but distinct from – Japanese. Nowadays, the language described in the grammar and dictionary is defined by linguists as ‘Shuri Ryukyuan’ or uchinaaguchi, the language of the royal court in Shuri, capital of the Ryukyu Kingdom, which enjoyed greater prestige among the various Ryukyuan languages [5]. 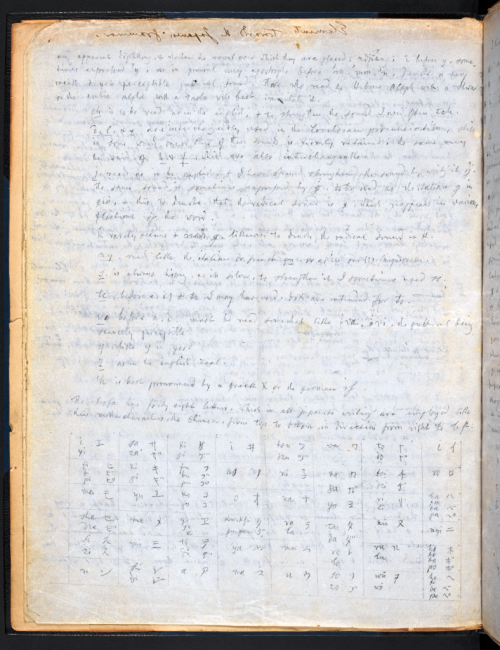 ‘On the Japanese Letters’ – katakana as used to write Okinawan (BL Or.41 f.3v)

Although Bettelheim’s Bible translations into Okinawan were published in 1855, his grammar and dictionary were long overlooked. The grammar was finally edited and published in the 1980s (Kina et al. (1980-1984)). It contains 100 pages with sections ‘on the Japanese Letters’ (i.e. katakana), the phonology, morphology and syntax of Okinawan as well as some exercises and examples of the language. The dictionary, which runs to over 1,300 pages from A to Zoology, remains unpublished. 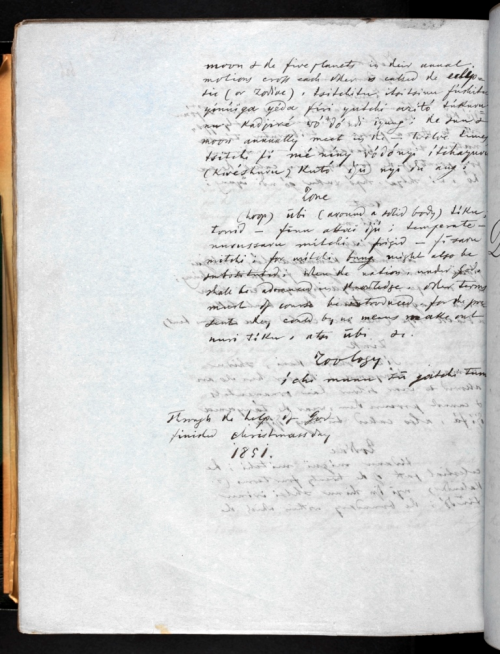 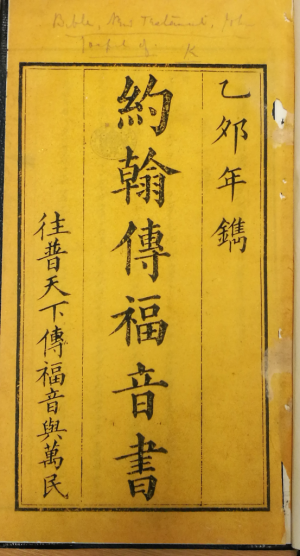 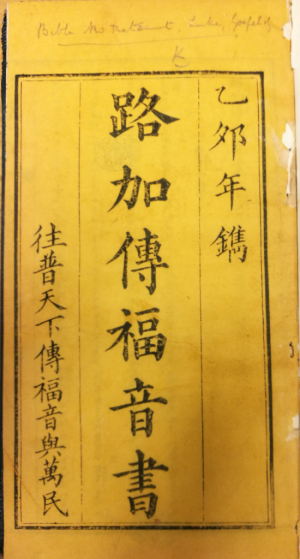 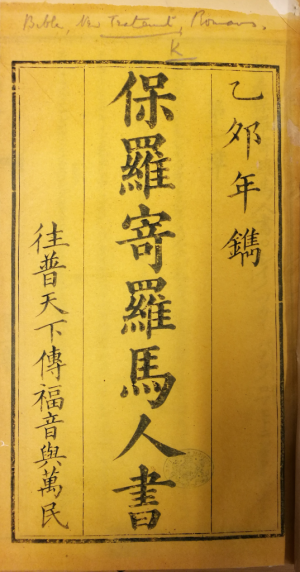 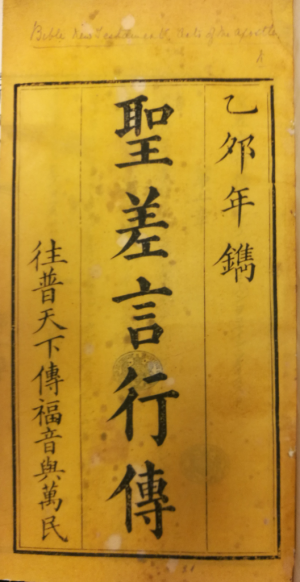 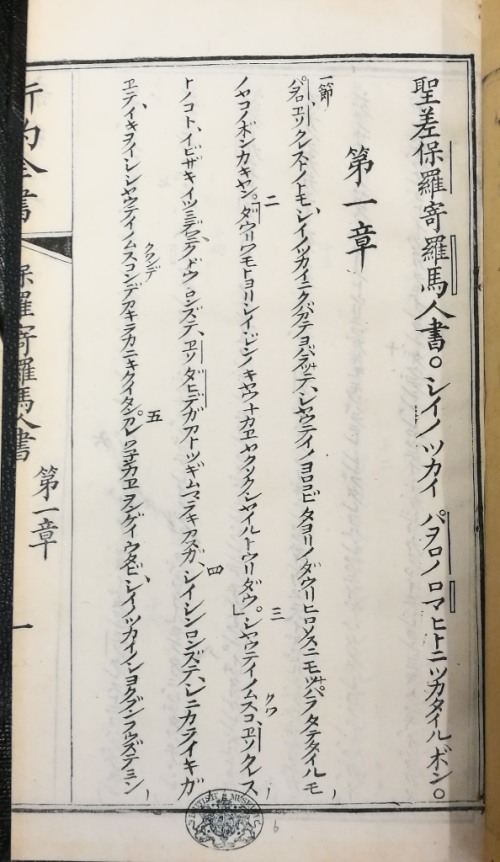 First chapter of Bettelheim’s Okinawan translation of St Paul’s Letter to the Romans (BL. 16011.a.12)

Whatever his successes or failings as a missionary, later generations have reason to be grateful for Bettelheim’s energy and dedication to recording the Okinawan language. His Grammar and Dictionary constitute an extremely valuable resource for the study of the language.

[1] Okinawan is one of the five (some argue six) Ryukyuan languages. The obsolete terms ‘Loochoo’ and ‘Loochooan’ derive from Liuqiu, the Chinese pronunciation of the characters 琉球 which are read in Japanese as Ryūkyū.
[2] An English and Japanese, and Japanese and English vocabulary : compiled from native works, by Walter H Medhurst. Batavia, 1830.
[3] i.e. Medhurst’s dictionary and Gützlaff’s translations.
[4] i.e. citizen of Edo (Tokyo).
[5] For a detailed description of the grammar contained in Elements, see Griesenhofer.

Posted by Ursula Sims-Williams at 1:26 PM