To mark the passing of His Majesty King Bhumibol Adulyadej and the accession of Maha Vajiralongkorn as the new King of Thailand, the Philatelic Collections is displaying a selection of Siamese philatelic and postal history materials from the Row Collection. Richard William Harold Row was born in 1884 at Kingsteignton, Devon to Richard Warren Row, a congregational minister, and his wife Eliza. An intelligent youngster with a passion for biology, natural history and taxonomy, their son focused on a scientific career, being appointed Assistant Lecturer and Demonstrator of Zoology at King’s College, University of London as well as being elected  a Fellow of both the Linnean and Zoological Societies in London. During the First World War Row was engaged in research at the Pathological Laboratory of the Fourth London General Hospital Malaria Department and tragically died during the Spanish flu pandemic on 16th February 1919. 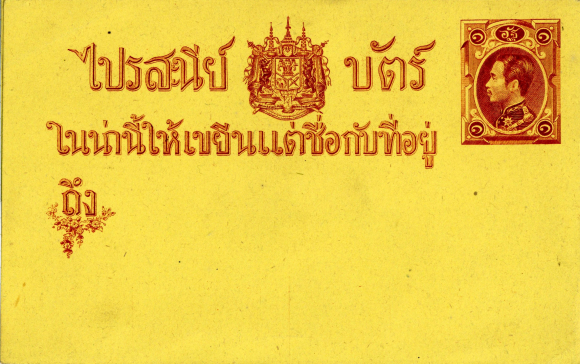 Like countless other philatelists, Richard Williams Harold Row initially attempted to form a general stamp collection, with the aim of acquiring a single example of issues released by various postal authorities. Looking down upon specialist collectors as “faddists and cranks, whose whole time was taken up with the elaborate investigation of the accidental features of an issue,” Row expressed this opinion to a friend who was a specialist collector. A lively debate ensued which not only challenged Row’s opinion but also encouraged him to form a specialist collection of Siamese stamps. Converted to the cause, the parallels between specialist collecting and taxonomy ensured Row was soon to become an avid active collector and leading authority on Siamese philately. During his lifetime Row repeatedly exhibited his collection in addition to publishing an important monograph and a number of papers on the subject.

By the time he was elected as a Fellow of the Royal Philatelic Society, London in 1916, Row’s collection was widely regarded as the world’s most specialised accumulation of philatelic material for any single country. With a keen eye to posterity, Row arranged his collection, having had it professionally described by Messrs Frank Godden Limited, a leading firm of stamp dealers. In accordance with Row’s wishes, after his death his mother Eliza presented the collection to the British Museum, and the donation was accepted by the Trustees on 11th October 1919. At the time the Museum’s first Philatelic Curator, Edward Denny Bacon, stated that Row’s bequest was the most significant philatelic donation to the British Museum since the donation of the Tapling Collection in 1891. The current display only showcases a small part of Row’s extensive collection and will be on display until 11th October 2020 in case 9, slides 33-50 of the philatelic display on the upper ground floor at St Pancras.

The display includes Row’s eight engraved and five lithographed essays for the 1881 unadopted issue, all depicting a white elephant, the national symbol used on the Siamese flags in the nineteenth century. Their provenance is shrouded in mystery yet they were probably commissioned for Siam’s first local postal service established by King Chulalongkorn at Bangkok in 1881 as an introductory step towards establishing a national post service.

Row’s collection of 1883 Permanent Issues being the first official postage stamps of Siam is also displayed. Comprising six denominations, only five of which were used, the design features a framed profile portrait of King Chulalongkorn facing left. The stamp was designed and engraved by W. Ridgway before being recess printed by Waterlow and Sons in London. Since Siam was not yet a member of the Universal Postal Union the stamps were not designed for international usage, consequently their textual inscriptions only being in the Thai script. 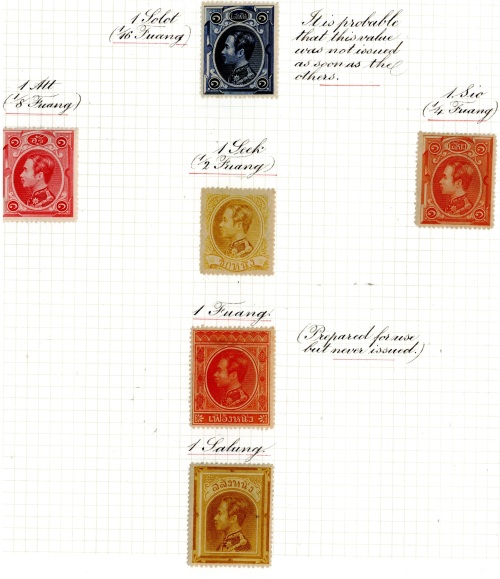 Row’s collection of the Siam 1887 Permanent Issue is also displayed. Commissioned by the Siamese Post Office upon obtaining membership to the Universal Postal Union, they were designed and printed in eight denominations by Thomas De La Rue and Company in London, featuring a framed full portrait of King Chulalongkorn. Intended for international use this stamp issue contains a mixture of Thai and European scripts. 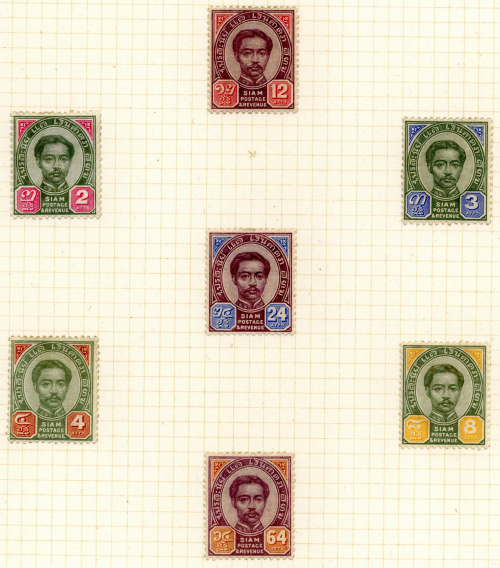 Part of Row’s collection of the Rejected Die Issue is also displayed. In 1899 the Siamese Post Office commissioned the German security printing company Giesecke and Devrient to produce a new set of stamps. The Company developed two designs, one of which was rejected by King Chulalongkorn. Despite being rejected they were accidentally put on sale in small quantities towards the end of 1899. 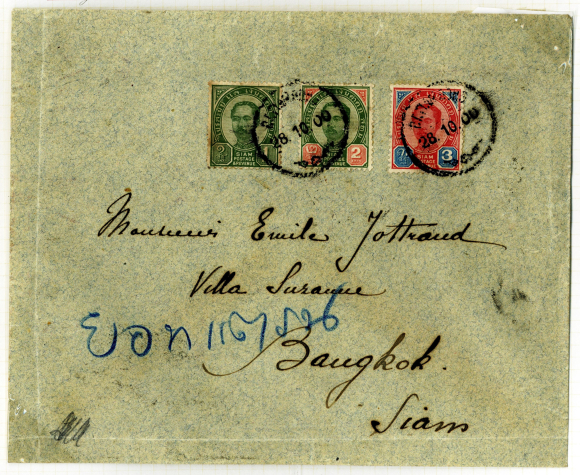 The majority of Row’s Postal Stationery Collection in addition to his collection of stamps used at Post Offices in Malaya at Kedah, Kelantan, Perlis and elsewhere are also displayed. 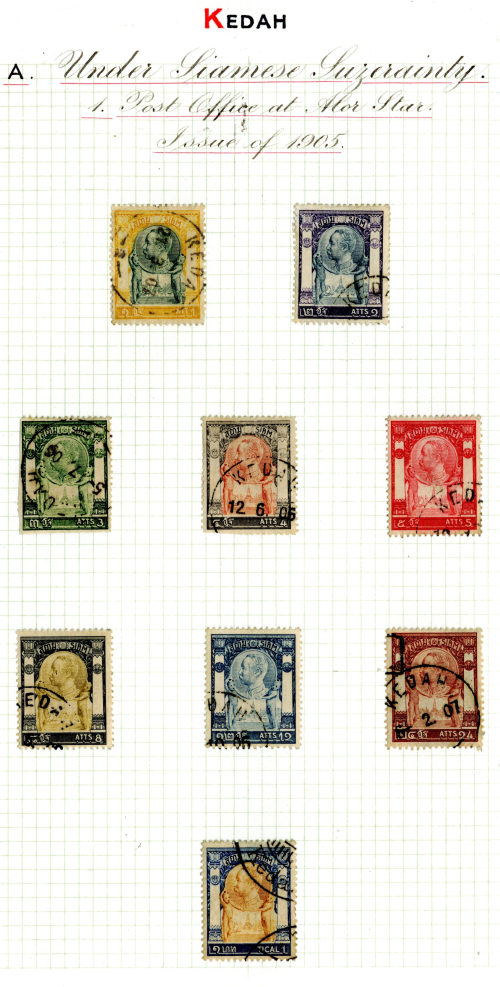 In addition to monographs and books, other relevant philatelic resources from Siam and Thailand within the British Library include the Tapling, Supplementary and UPU Specimen collections. These can be accessed by emailing the Philatelic Collections to book an appointment on philatelic@bl.uk.

With special thanks to Thea Buckley for helping me devise a suitable title for the blog.

Posted by Annabel Gallop at 1:48 AM