A Rainbow in Stormy Skies: LGBT Writing in the northern Middle East

On May 28, 2013, a small group of environmentalists gathered at Istanbul’s Gezi Park to protest the removal of trees. The police’s brutal response sparked the indignation of the city’s residents, and soon Gezi Park was flooded with ordinary citizens and activists. They voiced a number of grievances, chief among them the government’s refusal to engage with citizens about urban planning. The protests lasted for weeks, and the makeshift camp erected in the Park featured a dizzying array of groups: ecologists, Armenians, Kurds, Zazas, Alevis, Communists, syndicalists, anti-capitalist Muslims and LGBT rights organizations. The diversity of identities on display brought into the open the complex and sometimes confusing imbrications composing individuals’ self-identification in contemporary Turkey. Since the 1980s, sexual identities have played an increasing role in this construction, and over the last decade the stories and struggles of Turkish sexual minorities have been featured in a number of different media. 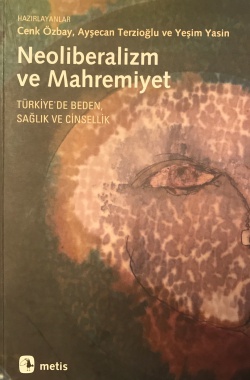 Neoliberalizm ve Mahremiyet ©Metis, 2011 and Women with Mustaches and Men Without Beards ©University of California Press, 2005.

To be certain, homosexuality, lesbianism, transgenderism and cross-dressing are far from new concepts to Turkish culture. Same-sex intercourse has been legal in Turkey (and the Ottoman Empire, its predecessor state) since 1858; 110 years before the partial decriminalization of homosexuality in Britain. The topic of gay and lesbian relations in Ottoman society and its imagining among Orientalist writers  is particularly popular among Western scholars.

While Turkish authors do treat similar subjects within their works, contemporary issues of social, political and economic equality, as well as the battle against discrimination, are more likely to be explored within Turkish academic publishing. Scholars Cüneyt Çakırlar and Serkan Delice, have been particularly active in their writings, whether in collections of contemporary Turkish studies on gender, queer identity and politics or in their participation in the Queer Düş’ün series by *SEL Yayıncılık, which seeks to bring English-language Queer writing into Turkish. Other writers, too, address difficult issues, whether theoretical or practical. Evidence of such comes to us from works such as Neoliberalizm ve Mahremiyet: Türkiye’de Beden, Sağlık ve Cinsellik (Neoliberalism and Intimacy: Body, Health and Gender in Turkey), where we find Cenk Özbay’s study of neoliberal sociology and the case of rent boys, as well as Yener Bayramoğlu’s look at heterosexism and homosexuality within contemporary advertising.

Despite the early legalization of same-sex relationships in Turkey, social stigmas remain. Istanbul’s pride parade has been routinely attacked and/or banned in the past five years. Images of police brutality as a response to attempts at organizing celebrations appear frequently on social and mainstream media. Social and political pressures notwithstanding, those who refuse to conform to gender and sexual norms are still very much visible in Turkish culture and society. The image of the transvestite, in particular, is an exceptionally poignant one in referencing Turkish LGBT communities. The novels of Elif Şafak, one of Turkey’s foremost female novelists, routinely feature LGBT and transvestite characters. Şafak herself has spoken out about LGBT issues in Turkey in the English and Turkish media is filled with the sort of fluid concepts of gender and sexuality that provide three-dimensional, realistic portrayals of LGBT people in Turkey today. Transgendered people find their way into other media, too, including graphic novels, such as Büşra, a wry, satirical look at piety, political power and hypocrisy in the first decade of the 21st century. Even more striking are the novels in Mehmet Murat Somer’s series Hop-Çiki-Yaya, which feature a cross-dressing amateur detective who often interviews her clients in drag. Somer’s works are bold and flamboyant in both their characters and their treatment of a number of topics that would be considered taboo in most countries: transgender sex work; married heterosexual men having sex with men; and the interactions of religion, tradition and sexual identity.

In many ways, Turkey offers the most liberal of régimes with respect to sexual minorities. Among its immediate neighbours, consensual sexual relations between men are permitted in Greece, Bulgaria, Armenia and Azerbaijan, while they continue to be illegal in Iraq, Syria and Iran. Among the former group, only Greece and Bulgaria offer legal protection from discrimination. Despite this, authors, activists and artists producing in Armenian, Persian and Kurdish all continue to address LGBT issues and the struggles for recognition and acceptance across the region. 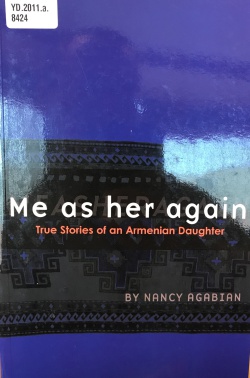 The Prophet Murders, the story of two murders at a transvestite club ©Serpent’s Tail, 2008; Me As Her Again, Nancy Agabian’s autobiographical work ©Aunt Lute Books, 2008

While homosexuality, lesbianism and transgenderism continue to be highly stigmatized inside Armenia proper, gay and lesbian issues are nonetheless present in Armenian literary and cultural circles. An example of one pioneer in this realm is the writer Armen of Armenia, whose trilogy Mayrenik’ Drash (Mommyland) tells the tragic story of three LGBT men in Armenia. The novels are unique in their presentation of the complexity of queer existence inside the Republic of Armenia, and the demands placed upon gay and bisexual men by the institutions of the military, the church and patriotism.

An estimated 7 to 10 million Armenians live in the diaspora, and among them are a number of writers who address the complex relationship between sexual and ethnic identity. Nancy Agabian, an American-Armenian author, has been particularly active in this respect. Agabian’s Me as Her Again, published in English in the United States, provides a moving vignette of the life and struggles of lesbians in the Armenian diaspora. In it, Agabian explores issues relating to sexual, gender and ethnic identity, interweaving the trials of a woman expressing her sexuality with those of an Armenian recovering her family’s buried past in Anatolia.

South-east of Armenia, the regional juggernaut Iran presents an even more complex case. Homosexuality remains illegal and punishable by death in the Islamic Republic. Nonetheless, gender reassignment is permitted according to a legal decision by the régime’s founder, Ayatollah Khomeini. Social stigmas around transgenderism are still rampant, and considerable confusion between gender and sexuality causes no end of distress to a great number of people. Nonetheless, homosexuality, lesbianism and transgenderism appear in many English- and Persian-language publications by authors in Iran and in exile. Academic works about LGBT relationships and the fluidity of gender in Iran are numerous, including the wryly-titled Women with Mustaches and Men Without Beards  by Afsaneh Najmabadi. Although this work is a historical analysis of these concepts in Iranian society, Najmabadi has also turned a critical eye on the contemporary period with her study Professing Selves: Transsexuality and Same-sex Desire in Contemporary Iran. Najmabadi is currently based in Cambridge, Massachusetts, and her long history of activism in Iran, the United Kingdom and the United States demonstrates the saliency of issues of gender and sexuality for Persian-speakers throughout the diaspora.

Such topics come up in a myriad of different narrative products. Early 20th century poetry, such as that of Iraj Mirza, featured homoerotic themes similar to those in earlier Persian poetry. To paraphrase Najmabadi, sin was the realm of deeds rather than thoughts, and a man extolling the beauty of another man or boy was not necessarily deemed to be off bounds for Sufi and other poets of the Qajar period. By contrast, the historian Ja’far Shahri claims that it was modernization and the social change of the early 20th century that brought about a conscious “corruption” of the city of Tehran and a gradual hardening of attitudes about sexual and gender norms. 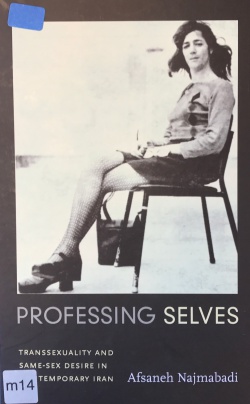 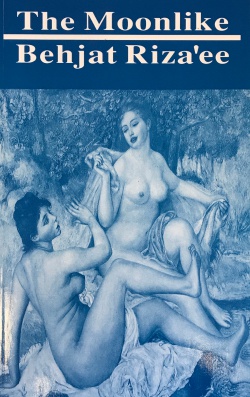 Professing Selves, on the complex and often problematic construction of gender identity in Iran today ©Duke University Press, 2013; The Moonlike, Behjat Riza’ee’s fictionalisation of a gruesome murder in Rasht that follows upon a forbidden love affair between two young women ©Bra Books, 1992

Among exile groups and communities, LGBT issues are alive in both magazines and monographs. As early as 1991, Bra Books in London published The Moonlike by Bahjat Riza’i, a barely fictionalized account of a lesbian affair gone wrong, ending in an honour killing near the city of Rasht in northern Iran. The Paris-based publisher Naakojaa most recently released a translation of the French graphic novel Blue is the Warmest Colour, which became a hit movie in 2013. This follows on its translations of Gore Vidal, the legendary bisexual American author. France has also provided us with filmic expressions of LGBT love in Iran with the 2011 movie Circumstance, by Iranian-American director Maryam Keshavarz. The film explores an illicit relationship between two young women in contemporary Tehran, and the various legal, political and socio-economic barriers that come make their love impossible.

Finally, the issue of gender and sexual identity within Kurdish sources is among the most difficult to piece together. Kurdish publishing is largely in its infancy, as the use of the language for mass publications in the regions in which Kurds live became a possibility only in the 1990s. Since then, identity construction, democratization, gender and income equality and the instability of an existence amongst seemly hostile nation-states has loomed large for many Kurdish writers. Despite this, there are instances of LGBT issues coming to the fore among Kurds at home and in the diaspora. In Turkey, Kaos GL has devoted a portion of its activities to bringing Kurdish-speaking members of sexual minorities out of the shadows. Whether endowing their Kurmanji-speaking readers with a new vocabulary to describe themselves and their communities in a positive and stigma-free way, or publicizing the efforts of a film director to bring to the screen the story of a Kurdish trans-woman living in rural Anatolia, Kaos GL has been forceful in bringing issues of sexual identity to the fore within the broader landscape of Kurdish social change.

In Iraq, Kurds have benefitted from more than 25 years of virtual and legal autonomy from Baghdad to build their own cultural institutions. The result has been a new confidence in self-expression, but one that is not always accepting of sexual minorities. Indeed, a number of campaigns regarding LGBT rights in the region – whether initiated by foreign bodies or domestic ones, such as the NGO Rasan – have been met with vociferous opposition. It may indeed still be too early for the publication of Kurdish LGBT fiction and non-fiction on the scale seen in other cultures across the region, but the seeds have undoubtedly been sown.

Among these various movements and trends, the British Library’s Asian and African collections remain committed to reflecting the diversity and richness of expression from across the Middle East. In doing so, we hope to provide students, scholars and the curious with a window onto the struggles and triumphs of a myriad of communities.

I would like to thank the following individuals for their assistance in connecting me to LGBT authors and publishers across the region: Armen of Armenia, Cüneyt Çakırlar, Kyle Khandikian, Hakan Sandal and Ayaz Shalal.

Meanwhile don't forget to visit the exhibition Gay UK: Love, Law and Liberty which is currently open at the British Library until 19 September 2017.

Posted by Ursula Sims-Williams at 12:07 PM