One of the treasures of the Urdu manuscript collection at the British Library has been digitised and made available online. The Pem Nem (Add.16880) is one of the finest examples of manuscript illustration from the court of Sultan Ibrahim Adil Shah II, who ruled the kingdom of Bijapur from 1580 to 1627. Containing 34 miniature paintings illustrating the Sufi love story of prince Shah Ji and princess Mah Ji, the manuscript was written by an author by the name of Hasan Manju Khalji, bearing the pen name of Hans. 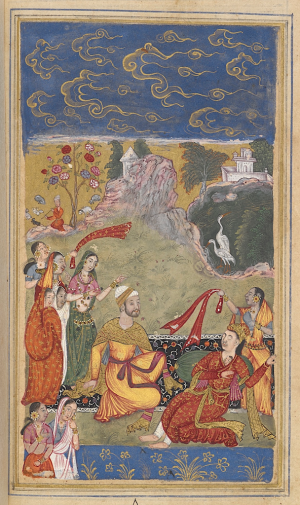 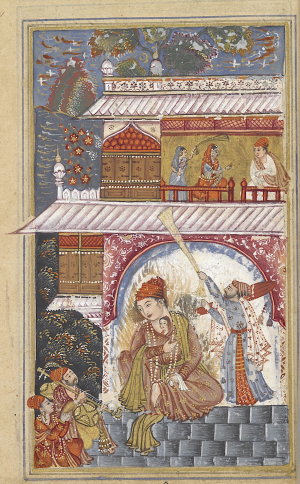 While the author claims in the introduction that the manuscript was written in the year 999 AH (1590/91 CE), scholars doubt that this claim is more than an attempt to harmonise the year of the manuscript's production with Ibrahim Adil Shah II's fixation with the nauras, the nine rasas or essences/flavours art. The introduction tells us that the body of the poem contains 199 rhyming couplets (dohas, two lines of seven syllables) and 999 quatrains (caupais, four lines with the rhyme ABCB), and praises the 99 names of God, suggesting that the text is indeed structured around the ruler's fixation with the number nine. Although the dating of the text to the exact year of 999 AH may be no more than poetic license, the art historian and expert on the Bijapur court, Deborah Hutton, has identified stylistic and textual details that allow the creation of the manuscript to be safely dated to the period 1591-1604 (Hutton, 'The Pem Nem', p. 45).

Originally mis-identified in Blumhardt's Catalogue of Hindi, Panjabi and Hindustani Manuscripts (1899) as a variation on the Padmavat of Jayyasi, the text of the manuscript was later studied by the eminent Urdu scholar, David Matthews, who describes the spiritual love story of the two main protagonists that differs from the Padmavat and is a unique work, although it shares the central feature of narrating a spiritual quest through the trope of a love story. 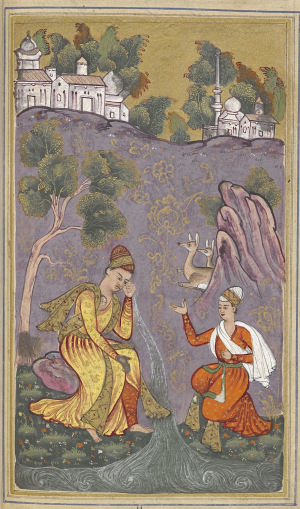 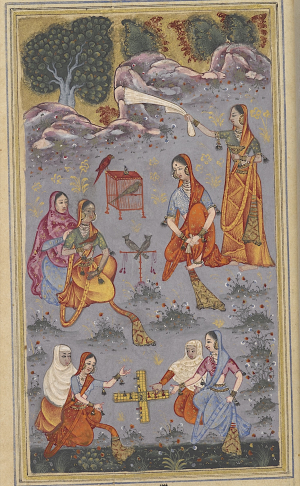 Left: Convinced that Mah Ji is only a reflection of the image in his heart, he weeps a stream a tears (BL Add.16680, f. 90v)
Right: Mah Ji passing time with her companions during her period of separation and longing, playing board games and tending to pet birds (BL Add.16680, f. 135r)

Not unlike other Persianate tales of spiritual awakening and the search for truth, the story begins with the hero, Shah Ji, encountering an image of his as-yet-unseen beloved, Mah Ji, brought to him by a tortoise, while Mah Ji receives a similar portrait-via-tortoise delivery. The two main characters fall deeply in love (Matthews, 'Pem Nem', p. 174). This curious scene, quite unfortunately, is not pictured among the illustrations of the manuscript. The hero's love for the heroine is uniquely depicted through the innovative visual metaphor of the princess' image appearing on his breast throughout the illustrations.   After falling in love, Shah Ji embarks on a journey to find his beloved, which takes him to an island where his paternal uncle rules as king, and where his daughter, Shah Ji's beloved, resides.   Upon finding his beloved, Shah Ji faints, and then later refuses to believe that Mah Ji is anything more than a pale reflection of the image on his chest, who he mistakes for the real beloved. In a case of mistaking the real for the reflection, Shah Ji abandons Mah Ji. At this point, the text integrates the Indic baramasa genre, which depicts the emotions of the different seasons as the twelve months of the year pass, into the Persian masnavi tradition, or Sufi love story of spiritual awakening written in narrative verse.   During her period of abandonment, Mah Ji is depicted as aflame with longing - quite literally on fire - for her absent lover, just as the same striking visual metaphor was used to paint Shah Ji's desire for his beloved before he encountered her.   Mah Ji is painted in scenes of amusement with her companions in the garden of the palace, although she maintains an isolated and melancholy air, such as in the images of celebrations for Holi, in which she broods while a maid fans her, presumably to cool her passions. 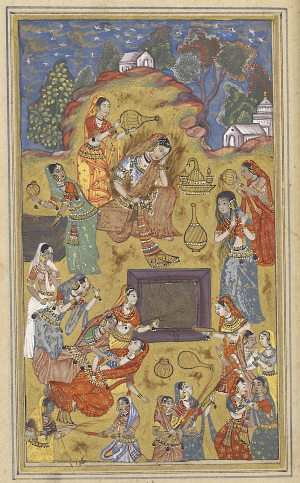 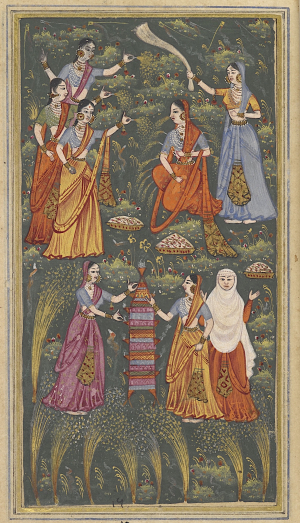 Left: The heroine is aflame with passion and longing for her absent beloved (BL Add.16680, f. 138r)
Right: While Mah Ji’s companions prepare fireworks and celebrate, Mah Ji sits alone and is fanned by an attendant (BL Add.16680, f. 147r)

After much solitary meditation, the hero of the story, Shah Ji, realised the spiritual error of mistaking the real beloved, the actual Mah Ji before him, for the reflection of Mah Ji in his heart, and returns to the palace to much rejoicing. The largest number of illustrations, twelve of the thirty four, in the manuscript represent the celebrations and rituals surrounding their union in marriage. As in other tales of the same genre, the union of the lover and beloved is a metaphor for the union of the soul with God after mistaking the image, the majaz or symbol (here the image of Mah Ji on the hero's chest) for the haqiqa, or truth. 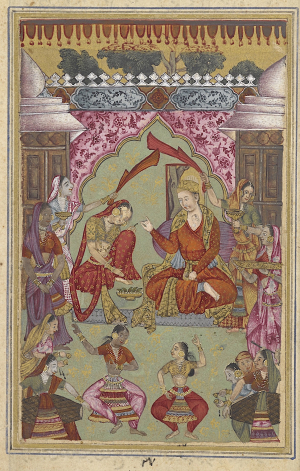 While the images of the manuscript have been studied by art historians, much research remains to be done on the text and its languages. David Matthews has commented that, "One of the most striking features of the work is its language. The gist of the text can be understood with a little patience; the grammar, syntax and meaning of many verses defy interpretation," and he has also identified the use of many words borrowed from Marathi and Telegu into the Dakani Urdu verse of the manuscript (Matthews, 'Eighty Years', p. 96), suggesting that a team of specialist scholars would have to examine the text of the manuscript together in order to make full sense of it. While the images have been studied, published and displayed, Marika Sardar in her description of the manuscript for the Sultans of the Deccan India exhibition, has observed that some of the paintings, undertaken by three separate artists, seem to date from a later period and serve the purpose of expanding the illustrative narrative without adding content. She also comments that the manuscript seems to have been dis-bound and re-bound slightly out of order, so much work remains to be done on both the text and the study of the images. While the gist of the story and the dating of the images have been established, further study of the linguistic and art historical intricacies are still needed, which should be helped by the availability of the digitised manuscript on the British Library's website. Regardless of the mysteries surrounding certain aspects of the manuscript, the artists have given us the striking visual metaphor of the hero carrying an image of the heroine in his heart throughout the course of his spiritual quest, and also the flames of passion quite literally springing from the two main protagonists as they long to be together.

Bibliography and Further Reading
Along with other manuscripts from the courts of the Deccan Sultanates, the Pem Nem travelled to New York as a loan to Metropolitan Museum of Art for the 2015 exhibition, Sultans of Deccan India 1500-1700, Opulence and Fantasy, for which Jeremiah Losty wrote a blog (British Library loans to Sultans of Deccan exhibition in New York).